Offline
My BN4 sat in a field for 40 years and is slowly coming along. The engine will hopefully run again later this summer but I need a Negative Ground fuel pump. Originality is not necessary and cost probably isn’t a decider either. I’m doing lots of modern upgrades so solid state doesn’t bother me. What I want most is reliability. A pump that bolts into the original location would be helpful too. I will most likely add a second small flow through pump in series like Lin did as well.

Rebuild my original? Is that even an option? It sat in a field for 40 years so i’m skeptical. If so can I do it myself or should it be sent off to someone?

Online
SU pumps are easy to rebuild; disassemble yours and see how the internals look. The shop manual has instructions on setting the points. Moss has kits, so does this outfit (NFI):

I've fought the battle with SU fuel pumps for over 3 decades. I was happy with Dave DuBois' rebuilds but he's gone and one of his failed on me recently. The replacement points sets I bought years ago were of inferior quality--Dave D. agreed--but Moss and others may be sourcing from SU Burlen now. Given you're doing a resto you have plenty to do, if I were you I'd buy the SU solid state and install it, and if I want to fiddle with SU fuel pumps I would do it when the rest of the resto is done and you can enjoy your car (you'll want to carry spare if you do a lot of out-of-town driving, backup pump or not).
H

Offline
should have added this pic--

Have also used this,same as above, aftermarket fuel pump\Spectra E8016S\SP8016U(Autozone Lifetime) since 2005. No regulator. First one went bad. Autozone replaced and has been trouble free many years. I do carry a spare. Easily switched if necessary. Ticks away like SU.
WD 67 BJ8

Offline
As you've discovered your options are many including real SU's (both points-type and solid-state, single and double-headed), SU clones such as the Hardi pump, and many aftermarket units such as those made by FACET and others.

For my Healey I prefer a solid-state SU just because it's correct and it will also have that nice, intermittent clicking sound. Since I am a fan of redundancy I have a double-headed version installed with an on-off-on switch mounted inconspicuously behind my seat.

If you're not a slave to originality your choices are many. Lots of people like the cube-types sold under the FACET and other names but I have had some fail on me, plus I don't like their constant clicking noise. On my Weber-carb'd race cars I use Carter 2040's and have never been let down by one and they put out plenty of fuel at 2-4 psi.

Offline
I should have mentioned--the pump body is isolated, so that it can be either negative or positive ground---"airtex" pump in my previous posting

Michael Oritt said:
....Lots of people like the cube-types sold under the FACET and other names but I have had some fail on me....
Click to expand...

Michael - Maybe the Facet pumps are getting a bum rap. IIRC you mentioned some kind of mounting issue where they both didn't work.
Steve Gerow
Altadena, CA, USA
1959 AH BN6 2-seat roadster / 1974 TR6 Emerald Green
Check out my galleries:
http://www.pbase.com/stevegerow

steveg said:
Michael - Maybe the Facet pumps are getting a bum rap. IIRC you mentioned some kind of mounting issue where they both didn't work.
Click to expand...

I had forgotten about that incident where a number of years ago I tried mounting two FACET pumps in parallel without any check valves and one of the pumps seemed to allow part of the other's output to flow back through it, resulting in partial fuel starvation when running on that pump. Rather than going with what seemed like an overly complicated installation I went to having one FACET in series with an SU with a selector switch, which worked just fine, the FACET able to push through the SU and visa versa. Perhaps operator error was involved.

As said in my earlier post I have since gone to a double-headed SU which I simply find philosophically preferable....
[SIGPIC][/SIGPIC]
Best--Michael Oritt
1954 Austin-Healey 100 Le Mans
1959 Elva MK IV Sports Racer
1961 Ginetta G4

It comes down to this - ultimately, the cars are performance art.

I mounted mine in series with an on1-off-on2 switch - works as advertised. 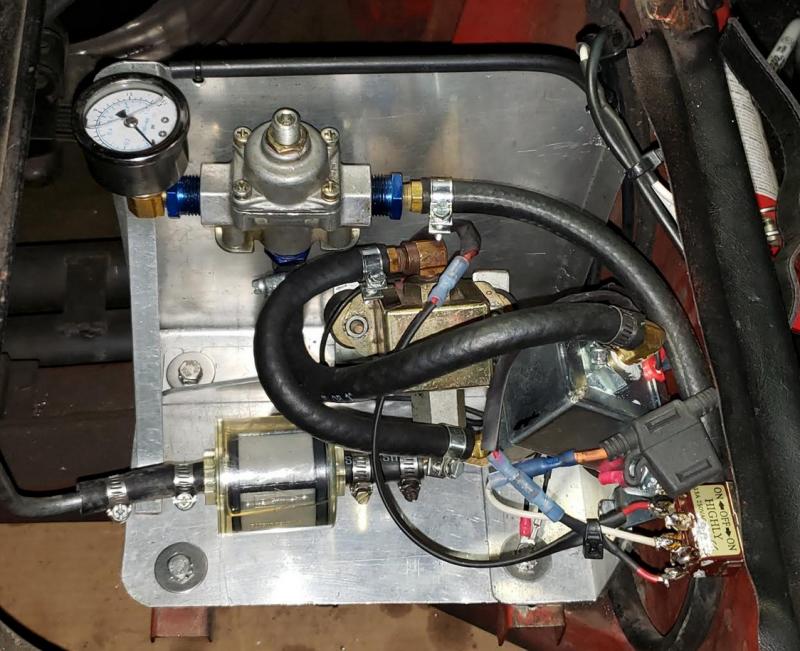 With both mounted on rubber isolation mounts, the ticking is only audible with the engine off. Have lately moved the fuse to the bottom slot on the Charlie Hart fuse box.
Steve Gerow
Altadena, CA, USA
1959 AH BN6 2-seat roadster / 1974 TR6 Emerald Green
Check out my galleries:
http://www.pbase.com/stevegerow

As said in my earlier post I have since gone to a double-headed SU which I simply find philosophically preferable....
Click to expand...

Same here. I've got a pair of switches, one for each half, and an auto shut-off in case I get hit.
John, BN4
Similar threads