Were Valve Covers Ever Painted Blue?

Offline
Im in the process of repainting the factory valve cover on my 60 BT7. It is painted a light metallic blue color. Every one I have seen has been the usual metallic green like the rest of the engine. Were some blue? It appears to be original paint and the car has been in my family since 1965 so I dont believe it was repainted. Any help?

Offline
The simple answer is no. However for a brief period in late 1957 they were painted Morris Green so anything is possible, although I've never heard of light blue being mentioned previously.
DerekJ
www.healeysix.net

Offline
I've seen dark blue engines, but it was not a metallic color; it too looked original as it was throughout and being torn down for an overhaul (same blue color in areas you couldn't normally hit with an aerosol/in car detail job).

Randy Forbes said:
I've seen dark blue engines, but it was not a metallic color; it too looked original as it was throughout and being torn down for an overhaul (same blue color in areas you couldn't normally hit with an aerosol/in car detail job).
Click to expand...

Offline
Here is what Im talking about. I started to sand it a bit so it is dull now, but you get the idea of the color. Anyone seen one this color? 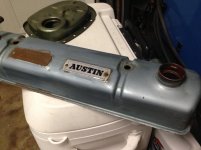 Offline
Btw the inside of the cover is red as you can tell from the filler neck. Is that what the rest were painted?

Guest
Offline
The few C series engines I have seen apart are painted dark red on cast surfaces plus the frost plugs and also the rocker cover inside and out before final paint. The timing cover, mounts, generator and starter are black under the engine green and the oil filter cannister is light brown. Pulleys were unpainted except for green. Sump and block end plates appear unpainted except for green. The engine green didn't stick all that well to the red which may have been Glyptal.

If your engine follows a similar pattern then maybe your rocker cover is original color but it does seem a bit odd as it would have been normally painted on the engine. One thing that'd give it away is if there are sanding marks in the steel under the paint and if the blue is directly onto the metal rather than being red underneath.

The timing cover behind it doesn't look like the original paint, there were black shadows under the bolt washers and also around the front where the pulley got in the way of the spray gun.

Offline
If your car is Healey blue, maybe someone just painted the valve cover in attempt to match the body color? I remember back in the day when people liked to paint there valve covers different colors as it was the thing to do back then. I have a original 39,000 mile 67 BJ8 and the motor has never been removed, everything is stock factory green color however the valve cover was painted black when I bought it! A testament to the valve cover painting craze back then! It's back to correct factory green now.
Similar threads