Offline
After a few years with little progress on this complete rotisserie restoration, final body work and paint happened this fall. The 1957 100-6 now sports new Colorado Red paint with black coves, as original to this car. The paint turned out well. Now it's time for all the other assembly work.

In the collection of used parts, I have two sets of windshield posts in sound condition. One has the remnants of a silver colored finish - possibly similar to chrome, although it may never have been as shiny as chrome. The other has old paint on it - not red though, so it may have come from a different car. Looking at on line pictures and at several Healey resource books, I have found examples with silver colored windshield posts and examples with posts painted body color. I also recall reading discussions on this or other forums about whether the posts should be painted body color or silver (or chromed).

Can anyone provide more information about whether these posts always were body color or not, from the factory? Were some or all of the early Longbridge built cars different in this detail? Thanks for any help with this.

Offline
Thank you for the suggestion and I will follow up on that. I also have a copy of the book by Anderson and Moment, but appear to have misplaced it.

In the meantime, I would like to install the windshield, as I have someone to help lift it into place for the next days. If anyone can help answer the question about the finish for the posts, that would be much appreciated.
H

Offline
The posts should be the body color. How early is your Longbridge? what is the the BN4L-O-xxxxx? If you are willing to share? What might you need? I have a number of new items ready to be installed. a front valance, air filter and many used wheel knock-offs. sed me a pvt note on what you might need? Best of Luck!!!

Offline
The Anderson-Moment book is basically a very outdated edition of the Originality Guidelines. It may hold some attraction as a collector's item in the same way that a 1945 edition of the Farmer's Almanac is interesting, but as a reference it is strictly obsolete.

Meantime, pending your purchase of the current Guidelines, here's a sneak preview that may be of interest: 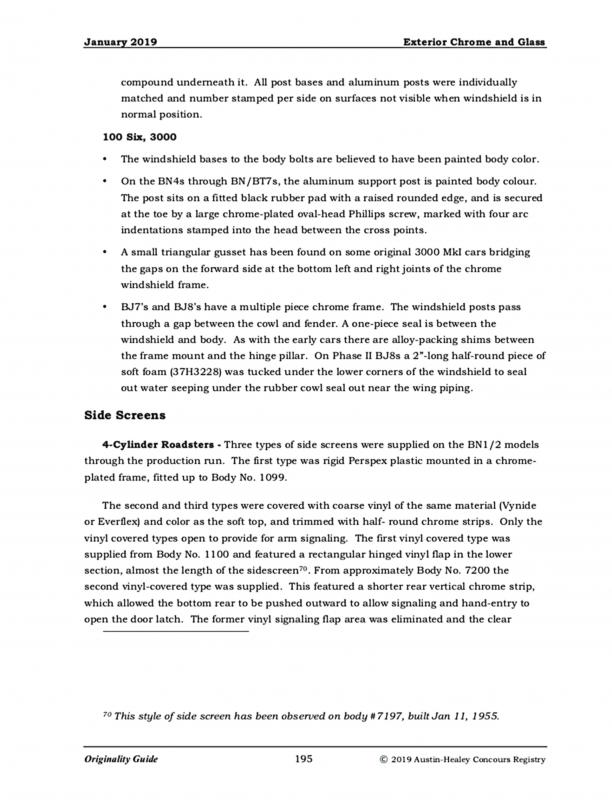 Offline
Anderson-Moment continues to be useful because it has a lot of pictures.

In my last-edition copy of the Originality Guidelines, there are some pictures, but not nearly enough, IMO.

IMO, the page sample above needs at least a couple of pictures. Describing something in words only is not as communicative as showing it in a picture plus the description.
Steve Gerow
Altadena, CA, USA
1959 AH BN6 2-seat roadster / 1974 TR6 Emerald Green
Check out my galleries:
http://www.pbase.com/stevegerow

Best of Luck
healey106
OP
B

Offline
Thanks for the help. Based on that, I just completed sanding and priming the windshield posts. Hopefully, color and clear coat will go on tomorrow.

healey106 - The manufacture date, according to the certificate, was February 6, 1967. Serial number: BN4-LO/342**. It was originally delivered to Chicago. I have no idea how or when it came to Canada. I bought it from an elderly gentleman, a body work instructor and restorer for a museum in Edmonton. His son had taken the car apart, probably sometime in the 1970s, at the age of 14. A few years ago, the father had rebuilt the frame and some panels when his health prevented him from finishing the project. When I bought the car, the son who took the car apart may have been 50 something. Talk about a long-term project! I've worked at it on and off for four or five years, while also redoing a BJ7 and a few other projects.

Thanks for the offer of parts, and I will keep that in mind. I do have two other Longbridge 100-6 cars (one white and one primrose yellow, originally), both in need of complete restoration. They serve as a good source of parts and for details about originality. For the red and black 100-6 in this thread, I bought most everything needed to complete the restoration a few years ago. Digging through those boxes of new parts and scouring the supply of old parts for parts to refurbish, both on and off the other two cars, makes a large jigsaw puzzle look easy. But, as I'm sure others would agree, every small step feels like a victory. A good winter project to complete the assembly.

steveg said:
Anderson-Moment continues to be useful because it has a lot of pictures.
In my last-edition copy of the Originality Guidelines, there are some pictures, but not nearly enough, IMO.
IMO, the page sample above needs at least a couple of pictures. Describing something in words only is not as communicative as showing it in a picture plus the description.
Click to expand...

The Anderson-Moment book includes errors; outdated information that is corrected in the Originality Guidelines. You're taking a chance using an obsolete reference, pictures or not.

Speaking of pictures, the Originality Guidelines, which now include the Guidelines proper, plus 13 supplements, plus a separate photos section, includes a total of 749 photos and 11 illustrations.

This publication, with its supplements, is a screaming bargain - nothing even in its league. Plus it's not 20+ years out of date. For just $25 you get it in PDF format, and so that means that it's also searchable in a way that the 1945 Farmer's Almanac is not. Christmas is coming and so perhaps some of you would like to buy yourself a stocking stuffer? 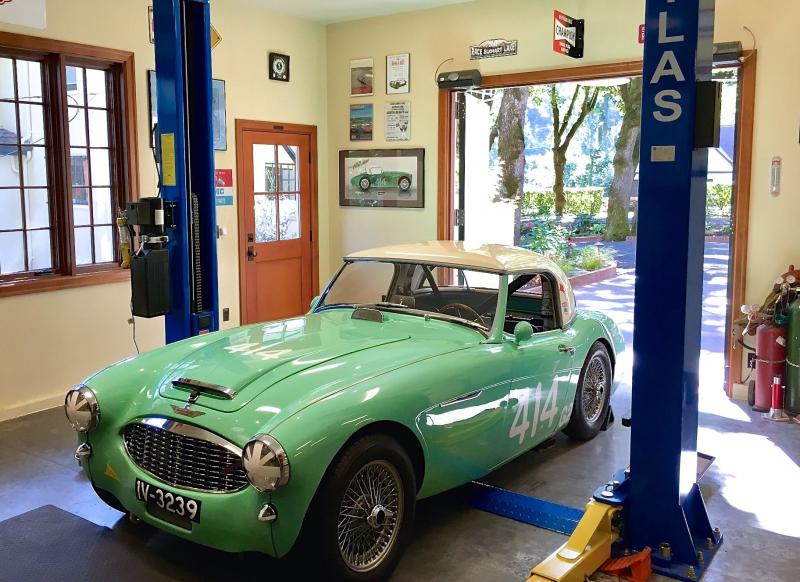 Offline
Thanks everyone for helping clear this up. My BT7 also has body color windshield posts, but I recall seeing a discussion thread where some who posted thought that some cars came with the shiny silver posts. Wonder where that idea came from. An image search of the internet also turns up quite a few cars with posts not painted body color. Maybe people like to dress up their cars by polishing the aluminum posts or by having them chromed.

Anyway, the posts now are body color. Just moved them and another valance that needed paint from the paint booth to the house for further curing, so that I could turn down the heat in the booth.

Now to clean and assemble the windshield frame and the glass. The pile of parts that came with the car included a wooden crate, which I was told had a windshield in it. Judging by the size and weight of the crate, I assumed it also included the frame and maybe an extra set of posts. No such luck. Only an old used windshield, fortunately unbroken. The seller had, before shipping the windshield, used liquid foam (which then hardened) to encapsulate and protect the windshield in the crate. The bill for the windshield was still attached to the crate as well. $500 USD back in 2012. Seems like a lot for a windshield, seeing that some of the restoration parts suppliers have them for a lot less today. Maybe the reproductions were not available back in 2012?? I have new rubber glazing tape and the weatherstrips to go under the windshield and the posts. Any tips or things to watch for with the windshield/posts installation? Installing a BJ7 windshield and frame a few years ago went OK, and the 100-6 looks less complicated if anything. But I've been wrong before.

Offline
The aluminum windshield posts on my BN6 are body color, although one benefit to having silver posts is that there is no issue with the inevitable paint chips that occur with mounting /removing the top. Good luck with completing your project.
R

TimK said:
...
I have a BN7, many of the tiny screws that hold the small L brackets on were impossible for me to remove — tiny screwdriver — tiny leverage. I ended drilling them out. Needed to order new brackets and screws (from Moss) to reinstall.
Click to expand...

Even if you have to scrap the tiny screws, the set of brackets I got for replacement weren't quite correct, and I reused my original brackets on my BN4. Save the brackets.
John, BN4

John Turney said:
Even if you have to scrap the tiny screws, the set of brackets I got for replacement weren't quite correct, and I reused my original brackets on my BN4. Save the brackets.
Click to expand...

Offline
I understand what you guys are saying about the brackets and screws. Some screws did break off, even with soaking in penetrant and efforts to slowly work them back and forth.
Fortunately, the stock of spare parts had extra brackets and screws in usable condition.
The possibly "original" windshield from some unknown Healey could have been a little wider, allowing it to fit further into the side channels, but it's in now and looks OK once finished. It seems that Healey parts often need tweaking to make them work - but one could also say that about other marques.
Similar threads