Post-War Other Herald for racing

Offline
It has been a while since I have been on the forum, but wondered if anyone could offer some advice. Some friends and I are thinking of racing in the 24 hours of Lemons, and as the owner of a TR6 and a Stag, I would prefer to go with as Triumph. For anyone not familiar, Lemons racing involves endurance racing (usually 8 hours on Saturday and 8 hours on Sunday) of cheaply bought cars - $500 limit to buy and prepare the car (though safety items don't count in that total).

A chap nearby has a 1965 Herald project for sale. I don't really imagine that anyone is going to buy it to restore, so I figure the three paths for the car are rusting to nothing, breaking for spares or we take it racing. We would need to weld in new floor panels, add a roll cage and fuel cell. The seller has another Herald that he is working on, and he would keep the chrome, badges and glass - we would remove the interior and any other parts we don't need and offer them for spares if anyone needs them.

From what I know, the Lemons races tend to be friendly, so hopefully the car won't be wrecked, but it would probably never go back on the road. I think it would be good to get the car out where it will be seen by some enthusiastic younger car people. We would need to come up with a Triumph-related team name and theme (all ideas welcome!)

I doubt that the 1147cc engine would set any lap records, but I had a friend in high school with a 1965 Herald, and that was a pretty quick along the country lanes. My plan would be to upgrade the car over several years, starting with the brakes. I guess that is where I hope someone can advise me here - I know that the Herald, Vitesse, Spitfire and GT6 are closely related, but how close? Would brakes from a GT6 fit the Herald? Could I take the engine, gearbox and diff from a Spitfire and put it into the Herald, presumably with the original prop shaft? I am not sure how much of an issue the rear wheel tuck-under is but would guess it is an issue when cornering hard - are there simple fixes we could employ to avoid it? Oddly, google has not really yielded any useful information on this! Parts supply would obviously be better over here if I could use the parts from the more common cars.

I would be interested in any other thoughts or comments - or if anyone in South East Texas has a Triumph for sale under $500 let me know!

Thanks in advance
Alistair

Offline
If you think of a Herald as a four-seater Spitfire, you'll get the idea of the interchange possibilities. Fact of the matter is that the Herald spawned the Spitfire, and mechanically they are very similar save for the 7" or so difference in wheelbase. Brake updates are very simple, as you can fairly easily swap in either Spitfire or GT6 front brakes. Spitfire is arguably easier. And with very little work, you can easily drop in almost any Spitfire engine and gearbox combination, but 1971-on Spitfire donors will require a bit of switching around of u-joint yokes and possibly shortening the propeller shaft. Same with differentials, especially in terms of swapping u-joint yokes around. For the tuck-under problem, I suggest a camber compensator, and possibly de-arching the rear spring and/or using a lowering block.

But before you even think about any of this, make sure your base Herald has a good, solid chassis...or you're a very good fabricator/ welder type of person!
-- Andrew (Andy) Mace, VTR's Triumph 10/Herald/Sports 6 vehicle consultant and keeper of the North American Triumph Sports 6 and Herald Database

Offline
Oh, and if you need inspiration, take a look at this: 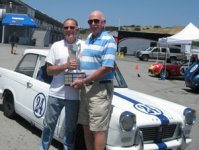 Offline
Hey, I'm a Triumph guy in Houston that vintage races a Spitfire and occasionally I'm part of a TR6 endurance race team. We started in 24 Hours of Lemons, did Chump Car for awhile, and now run in WRL.

24 Hours of Lemons can be rough, I did it once, it was kinda like racing in rush hour traffic against giant crappy sedans.

I think Chump is in between the two, I haven't personally done it.

I can tell you our TR6 has been the smallest car in all of these leagues and I'd be scared to race something smaller or slower. A Herald could be okay if you give it a really hot Spitfire engine or a moderately hot TR6 or GT6 engine. You don't want to go out there with a stock engine, you'll be racing with your rear view mirror as you'll constantly be passed and feel like you are in everyone's way. That's not fun.

Holler if you want to chat more
nicholsondustin@yahoo.com

Offline
Thanks for the advice guys. I take the point about being slow, but the average speed at the local races seems to be under 60mph, so if we can maintain speed around the corners better than the big cars we might do okay. I see that there is a Spitfire that has been used in Lemons for years (I realise it may be a series of cars, but the team name is the same). Arguably the Herald should be comparable, and maybe the extra wheelbase would be helpful. We would need to raise the output from the engine though, and I don't think just using twin carbs and a Spitfire head would be enough. Anyone know where we might find a suitable 1300/1500 engine? For that matter, where should I be looking for Herald parts on this side of the Atlantic?

I spent some time looking at parts drawings last night, and it looks like the front suspension uprights are different for Herald, Spitfire and GT6. I'm not sure if there is much difference between the brakes anyway, given the 13 inch wheels that seem to have been used for all variants. The diameter of the discs seems to be the same at 10.25 inches. I think that the GT6 vertical link uses a thicker stub axle and hence bigger bearings, which would be useful, but I am not sure if it is worth more than the cost of the car to change them. It looks to me like everything between the trunnion and ball joint would need to be replaced together.

We aren't committed to the Herald yet - we plan to go look this weekend. I know that the floors are rusty - are there any common spots to check the chassis condition? As far as I know, the car has been in Texas since it left Coventry, so hopefully the rust isn't terminal.

Offline
Spitfire discs are 9", and they use the Girling Type 14 caliper. The GT6 discs are 9.7" and use the larger Type 16 caliper as found on the TR6. You're right in assuming that basically one replaces everything between trunnion and upper ball joint!

As to the chassis, check first for rust in the rear outriggers, which is where the rear suspension radius arm bolts up. then look at the outriggers "holding up" the trunk. If there's any rot there, you might also find rot in the main chassis rails in the area of the rear differential. Hopefully this really is a '65 Herald; from June 1962 on, the Herald chassis was much, much stronger than those on the early cars. In fact, those early chassis have a number of known weak areas and really are not suitable for increased power over their original engines, and the stresses of racing likely would just exaggerate those potential problems.

If you like, get the commission number of the project car, and I can tell you what you'd have to work with.
-- Andrew (Andy) Mace, VTR's Triumph 10/Herald/Sports 6 vehicle consultant and keeper of the North American Triumph Sports 6 and Herald Database
Similar threads