Offline
By By Nigel Matthews, The Province August 28, 2013

This 1956 Austin-Healey 100-4, which was modified during the mid-1960s, is a unique one-off example sold at the Mecum Auction in Monterey, Calif.


The last time I witnessed the sale of a sports coupe built by California Metalworks, it was at the inaugural 2009 Mecum auction in Monterey, Calif.
That car sold for $7.25 million, making it the most expensive American-built car to sell at an auction.
The photographed 1956 Austin-Healey 100-4 fastback coupe was purchased new by Ralph Boothe of Los Angeles as a stock Austin-Healey. Having used it for a number of years he completely disassembled the car and detailed the chassis and rewired the car to his liking.
He designed a fastback hardtop that blended into the rear fenders, replaced the rear aluminum centre section that would normally be riveted to the car’s steel framework and eliminated the trunk lid. He decided to use an Austin-Healey 3000 windshield and frame up front, and an inverted Renault Caravelle windshield for the hardtop’s rear glass.
The 18-gauge steel top was fabricated by California Metalworks Co., the same company that built the Scarab and the Peter Brock designed AC Shelby Daytona Coupes mentioned above.
The conversion made the car a lot more rigid than the factory-built convertibles, resulting in different handling characteristics.
Having removed all of the bright work and identifying badges, the finishing touches and paintwork were performed by Gil’s Auto Body Works in East Los Angeles.
When I examined the car it was still finished in its original Standard Oil red lacquer paintwork and showing less than 37,609 original miles, all placed on the car by Ralph Boothe who still owned it.
The Mecum auctioneer’s hammer fell at $50,000, and considering the uniqueness of this vehicle I thought the price was quite reasonable.
One thing that struck me was the lack of a passenger side rear-view mirror, resulting in what I’m sure is a terrible blind spot from the driver’s seat. Changing lanes must have been exciting!

Offline
I looked this car over when I stopped by Mecum's auction while searching for some deals. I found it interesting, but very tried and in need of a lot of TLC. I had it listed more like $30-35K. Seller should be very happy.... 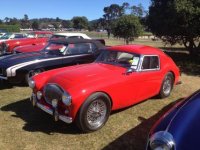 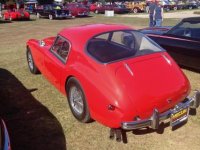