HealeyRick said:
Wow, what a project that metal work has been. You're fortunate to have found someone with the skills to carry it out. Should be a beauty when it's all finished.
Click to expand...

Yep, Dirk the metal magician is a real craftsman.
I'm looking forward to end of next week and the hardtop test fit.
All being well it should fit and I can take some pics of the whole car prior to it getting pulled apart readied for superstructure painting.
The superstructure is already in epoxy primer but it’s seven years since it was built by Marty at Jule. So every corner, nook and cranny will have to be scuffed for adhesion of new coats, etc.
The car/work gets admired by customers, etc., who go to the shop and many think it’s a Cobra???
"If it aint broke ....dont fix it "
" Thats not an oil leak ..........its a special automatic British rustproofing system "
Best Healey in show ABCD Ottawa 2013
Best Healey in Show Boot n Bonnet Kingston 2013

Offline
It will look great when completed.... 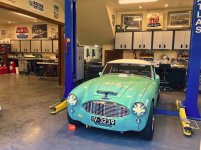 dougie said:
It will look great when completed....

I need a shop as clean and tidy as yours Dougie . Mine is jammed with other peoples cars right now in storage over the winter .
Im waiting on my rally pods and scuttle scoop from Dave Hardwick in the UK .
I would like to get them soon so they can be test fitted etc .
On the subject of scuttle scoops what is the measurement between the back of the scoop and the edge of the windshield or the distance from the back of the bonnet opening to the front of the scoop ?
Once the holes are cut in the front shroud and top cowl of the superstructure is the air that enters through the scoop ducted or directed anywhere in particular or is it just free flow into cockpit behind the dash ?
"If it aint broke ....dont fix it "
" Thats not an oil leak ..........its a special automatic British rustproofing system "
Best Healey in show ABCD Ottawa 2013
Best Healey in Show Boot n Bonnet Kingston 2013

Offline
Well that was a chore , spent a couple of hours moving cars around so I could get to my high level shelf to get the hard top down .
It doesn’t look to bad theres some bubbling in the finish at the back close to the rear window (which will be replaced) but that’s where the rally vent is going so most of that will be cut out and the rest should disappear with repair/repaint . The quarter panels are missing inside no big deal there they can be made .
Main thing is no cracks or significant damage .

Offline
Here's a few pictures that show the placement of my shroud vent. I use a Nascar style air-intake duct mounted to the bottom of the vent then run a 3" hose off it to the footwell for cooling my toes during competition.

There's some great information on this subject in this thread we had going a few years back on this other forum, https://www.ahexp.com/forum/the-3000-forum.3/austin-healey-scuttle-vent.181525/ 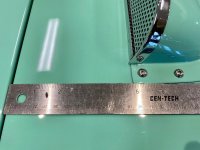 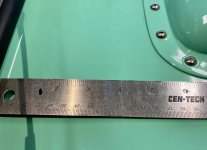 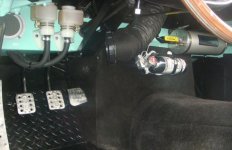 Offline
Awesome Tks Dougie .
Im thinking having seen the other thread using the rubber boots for the heater box on the underside of the cowl /scuttle with the hoses directed to the foot wells is probably the way to go .
BTW , what is the canister with the shut off valve above the fire extinguisher?
"If it aint broke ....dont fix it "
" Thats not an oil leak ..........its a special automatic British rustproofing system "
Best Healey in show ABCD Ottawa 2013
Best Healey in Show Boot n Bonnet Kingston 2013

Healey Nut said:
Awesome Tks Dougie .
Im thinking having seen the other thread using the rubber boots for the heater box on the underside of the cowl /scuttle with the hoses directed to the foot wells is probably the way to go .
BTW , what is the canister with the shut off valve above the fire extinguisher?
Click to expand...

It's an Accusump oil accumulator, https://www.dragzine.com/news/canton-racing-what-is-an-accusump-and-how-does-it-work/ 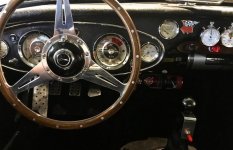 Offline
So another visit today to check on hardtop fitting progress among other things .
fit isn’t too bad now but I’m going to get new seals to lay in place on rear shroud and top of windscreen frame before we tweak anymore .
Dirk the metal magician has also been dealing with my mesh inserts behind the oil cooler intakes and rally vents .
They are stainless mesh and will be left bare to contrast against the Healey Blue and hopefully more shiny and clearcoated before final install .
The oil cooler screen will be held in place by small tabs welded to the inside of the shroud for nutserts . The rally vent screens are a tight fit but will have set screws on the three corners for extra security .

Offline
Last pic inside of rally vent on wing .

Offline
Beautiful work. I don't have screens on my rally vents.
John, BN4

John Turney said:
Beautiful work. I don't have screens on my rally vents.
Click to expand...

Yes it’s hard to find good metal guys but I got lucky.
I wanted the grills behind the vents as they look very open without the grill behind and I kinda drew inspiration from my Aston Martin as that has grills behind the fender strakes and in the hood vents .
Last edited: Jan 20, 2021
"If it aint broke ....dont fix it "
" Thats not an oil leak ..........its a special automatic British rustproofing system "
Best Healey in show ABCD Ottawa 2013
Best Healey in Show Boot n Bonnet Kingston 2013

Offline
Metalwork declared complete . Time to pull it all apart and start epoxy painting of all the bare parts and get the superstructure into its Healey Blue coat .

The scuttle scoop will be fitted at some point before the final paint is done . Problem is I have been trying with no luck to get hold of Dave Hardwick who is making both the scoop and Rally light Pods for me .
Hope hes OK with all this Covid crap going on .
"If it aint broke ....dont fix it "
" Thats not an oil leak ..........its a special automatic British rustproofing system "
Best Healey in show ABCD Ottawa 2013
Best Healey in Show Boot n Bonnet Kingston 2013

Offline
So the car has all been taken apart now and all the shrouds , doors and fenders have been epoxy primed . The superstructure was already in epoxy primer but is now getting prepped for primer and colour along with the black epoxy truck bed liner type coating on the vulnerable areas just like I did my 64 BJ8 .
The car is going to be Healey Blue with OEW hardtop .
I know the Healey Blue has been discussed debated etc ad nauseum / infinitum but here goes .
I got some colour codes for my painter and he did some spray outs .
One is a Ford colour and one is a Toyota colour . See pics . The top blue in the two blues pic is the Toyota blue which is the one Im going to use .
The OEW spray out is what was used on my 64 RED/OEW BJ8 . It looked good with red but is too creamy for the Blue IMHO .
In the background is a section of my original hardtop which I buffed with cutting compound and polished ,which Im fairly confident has original OEW on it as you can see it’s more white .
So that’s the colour choice Im going with the Toyota Healey Blue and a close match of my Hardtop OEW .
All Tks for the colour codes goes to Amanda at AutoFarm.

Offline
Love your project. The metal work looks great and I like to see that you are using SS mesh backings on the vents. I may be a bit biased but I think that's a nice touch. I did that on my Works Rally Tribute car and have them mocked up for my current build. Mine were a bit more basic than yours on the inside, but looked similar on the outside.

Offline
I thought about the access panel , I have also seen a car that had a air scoop in the same place . But I’m just going with the scuttle scoop, rally vents and oil cooler intakes .
Dave Hardwick sent me pics of my rally light pods which hopefully will be heading my way soon .

I'm also wondering how you are attaching the SS mesh screens on the oil cooler ducts? FWIW, I put mounting tabs on the 3/8" round rod used to shape the shroud around...which is simplistic and works well. Pic attached.

Offline
So for the fenders which came with rally vents already installed .
The rally vents were approximately 3” deep into the interior of the car so my metal guy cut a step in them to clear the footbox , then I came up with the mesh in behind idea so he trimmed them off flat at about 2”deep (which IMO looks way better) and then he Re welded the blades to secure them and did the wrap around strip over the mesh edge to both hold the mesh in place and also add more rigidity to the whole vent assembly . (See previous pics) . The grill and wrap around strip is a tight press fit but also has set screws on the three corners for extra security so no visible fastners . They will only be fitted after painting so the stainless mesh can be left polished .
Also on the passenger side the brace that goes between the inner fender and footbox was removed and repositioned lower down so you can’t see it through the grill /rally vent
For the front oil cooler grills.
My metal guy made an aluminum frame for the mesh (see previous pic) and there are tabs of material welded inside the shroud by the sides and between the openings to accept , sheet metal screws , nut and bolt , nutsert with screw , body clip with screw , whatever I decide is easiest to hold the mesh frame in place .
I made the metal hoop/forms for the openings but we decided to only use them to shape the openings , they are not left in place inside the shroud . The shroud material is rigid enough as is it’s not structural feature and the openings etc actually make it more rigid .
I also didn’t want the dissimilar materials issue of having a steel hoop trapped in behind the aluminum .
"If it aint broke ....dont fix it "
" Thats not an oil leak ..........its a special automatic British rustproofing system "
Best Healey in show ABCD Ottawa 2013
Best Healey in Show Boot n Bonnet Kingston 2013
Share:
Facebook Twitter Reddit Pinterest Tumblr WhatsApp Email Share Link
Top