A prefix for general technical articles that might apply to multiple marques (e.g., adjusting SU carburetors)

The Lucas two-speed variant of the DR3A wiper-motor, as found on Triumph TR4A and other vehicles from the same era, seem to create problems when people try to wire them up.

Often this happens when someone tries to use one to upgrade from a single-speed variant. There are a number of things about these motors that are “counter-intuitive” and this leads people to guess wrongly in the absence of proper wiring instructions.

There will be useful information in here about using the single-speed types too and for the earlier DR2 type, found in TR2/3s and elsewhere, because these use more or less the same electrical parts even though the gear-wheels are different. 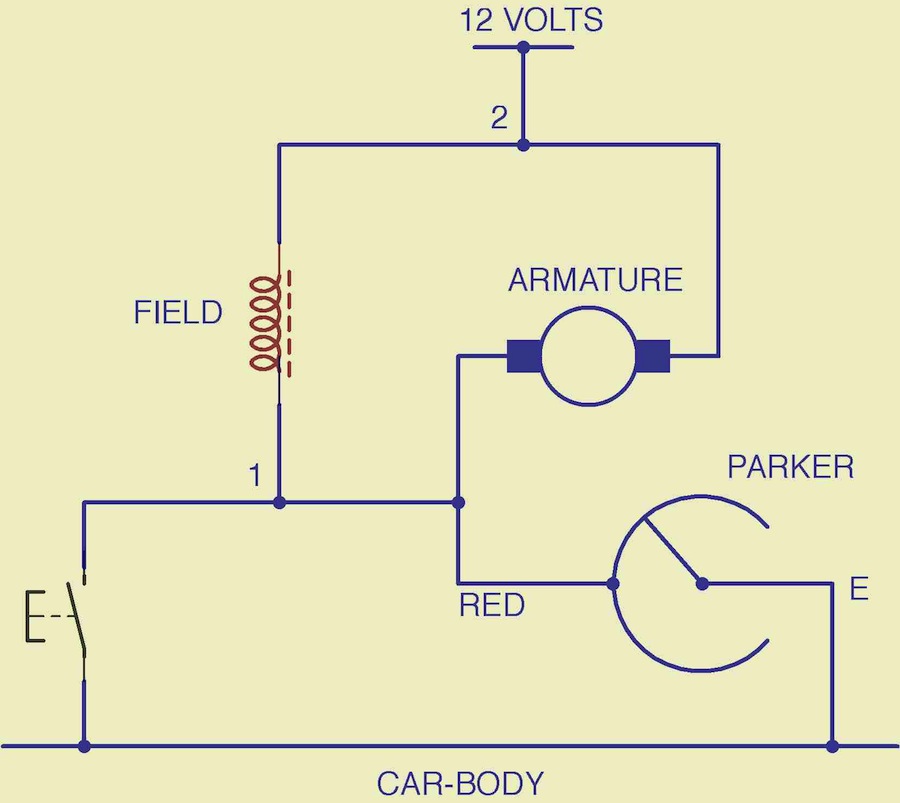 Rather than just give a set of step-by-step instructions, I want to explain how these motors archieve two-speed running. Hopefully this will put people on the right course to fit these as an upgrade in various suitable vehicles.

The single-speed Lucas motors from this period run a bit slow by modern standards. I'll be explaining how to speed them up a bit, so that if used with “intermittent-wipe”, performance is more like a modern unit.

There are two separate electrical circuits in these motors, the Field-winding and the Armature-winding, and the relationship between the current that goes through each of these determines the running speed.

I've got one of these from an E-type, that has all the wires from the Field and Armature-windings, brought out separately though the case. There are actually six wires in all! More on this variant later.

But the TR4A motors join some wires together inside and only three come out through the case. The diagram below shows how this is done. It also shows how the “self-parker” is wired in.

A standard single-speed DR3 motor does not bring the wires through the case, like a two-speed variant. It has two “spade” terminals that take push-on connectors. These are marked 1 and 2 in the alloy-casting, on the end of the motor.

There is a separate spade-teminal, markerd E, which is for connecting the case of the motor, to the vehicle body. The motor will run perfectly even if you don't connect its case to the car-body. But it won't “self-park”.

The self-parker is a rotating contact that touches the case of the motor but only during about 3/4 of the wiper sweep. There is a “gap” where it makes no contact at all. If you connect the motor-case to the car-body, you can use this as a switch that keeps the motor running, until the contact reaches the gap that is and then it “parks”.
Click to expand...