Everything went pretty well today. plastigauged all the rod bearings and all were right at the .003 mark. So at the top of the gap range but within spec. So all new shiny nuts on the bottom end are a good thing. i also put on the new timing chain and new tensioner. Got the covered installed before it was time to give it a rest. Hope to get a couple of hours in tomorrow as well.

1) how tight do you all normally put the carnk dog nut? i know it took a pipe on a pipe wrench to get it off but that may have as much to do with age. i could not find any spec on it. Turn it as tight as i can and then lock it?

2) also was wondering how tight you all torque the oil pan bolts. same as the front cover?

Hope to put the new oil pump in tomorrow and the oil pan. then it is on to the head. any suggestions or tips on these two jobs is always appreciated. 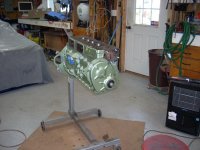 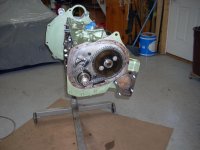 i ended up tightening the dog nut good and tight with the pipe wrench. i realized the nut is tightening against the shaft and not the pulley. i used some anti-seize on it and then locked it with the washer.
the oil pan nuts i may have got to about 5 lb/ft. it looked like the gasket was starting to push out so i quit there. probably was not even 5 lbs. but i feel i got them consistent. after getting the pan on, i did a touch up paint from the bottom of the engine. bolt heads mostly.

also put in the new oil pump and primed it with motor oil. can't really do the vaseline thing since they do not want you to take the pump apart for any reason. So i poured it full of oil.

still had some time left today so i put the head on. i want to get a few more pieces on and then touch up paint the engine from the top. i have sent the rocker arm assembly out to be rebuilt. No need to go this far and not do that. don't really need the rockers to put the engine in so i am going to work on getting everything on to set the engine in the car. wow, it is going to be tight. certainly would be less stressful with the body off but i do not have that luxury.

i also want to test fit the alternator set up and see that everything bolts up straight. wiring is all ready for it in the car. 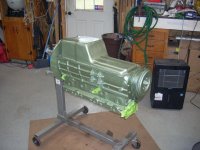 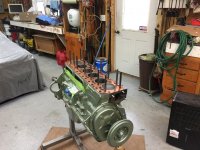 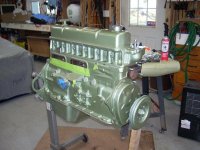 Two things to check:
--make sure the spin-on filter adapter is on correctly. Mine had a "T" for Top stamped on the top of the curvature. I didn't notice it and installed the T on the bottom. When we first fired up the engine, the oil pressure stayed at zero. Russ Thompson noticed I'd installed it upside down.
--the banjo pipe bolt from the head to the rocker pedestal can strip the pedestal threads - make sure you install both bolts loosely by hand before snugging them up.
Steve Gerow
Altadena, CA, USA
1959 AH BN6 2-seat roadster / 1974 TR6 Emerald Green
Check out my galleries:
http://www.pbase.com/stevegerow

i realized the nut is tightening against the shaft and not the pulley. ​
Click to expand...

I really hope I am reading this wrong, but if you are saying the nut was bottomed out on the crank shoulder or the inside of the nut and not gripping the pulley, something is wrong. The nut has to grip the pulley to help make sure it never "frets' on the crank snout.
I hope you remembered the oil slinger?
Dave
Last edited: Jan 21, 2018

Dave, i did write that wrong. sorry. guess i should say... it has a very positive stop when tightening. and yes i did put in the oil slinger. it is funny, you go thru all your notes put everything together... but as soon as you tighten a cover up, you think.. did i do this or that? one reason i wanted a checklist to go by. when you don't do these things very often it is easy to miss a step. like i almost missed putting on the carb return spring holders when i went to tighten the head bolts.

Drone Dog, That is great news. I was sorry to question your abilities - the reason I asked about the oil slinger is remembering the time I forgot it until I had the engine ready to go back in and saw it sitting on the corner of my bench. I know all too well that feeling that you may have forgotten something....
Dave

Dave, please question away. i was putting the thermostat cover on today and almost forgot the thermostat.... wheweee. old age.....

i got some work done today. put on the new water pump and thermostat (then i wondered if i put it right side up after the cover was on...man). also test fitted the alternator. i have the GM one. only two things that took some extra time. i had to grind the front mount to allow the alt to swing freely down to the bottom of the bracket travel. also the spacer they sent for between the front tappet cover brackets was a little short. probably would have been fine but i found a thin washer that filled the gap nicely. just don't want to put and undeo stress on the cast metal. 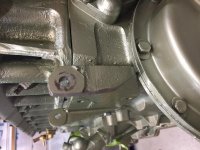 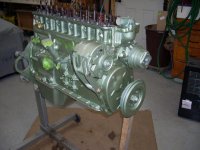 also want to work on the old coil bracket to make it fit this alternator.
OP

steve,
i did make sure my adapter had the oil line up. Thanks.

and i had seen the video by the guy in Austrailia about that banjo bolt and stripping the threads. i have notes posted on all the parts before i go to assemble.

but thanks for the reminders.

Do you have any photos of the bottom end right before you put on the sump (oil pan)? I have a couple tubes I found in my basketcase bin that look like they may screw into the bottom of the journals. None of the drawings I have seen are clear on these though. I don't understand what their purpose would be or what would keep them from vibrating loose. Thanks.

Do you have any photos of the bottom end right before you put on the sump (oil pan)? I have a couple tubes I found in my basketcase bin that look like they may screw into the bottom of the journals. None of the drawings I have seen are clear on these though. I don't understand what their purpose would be or what would keep them from vibrating loose. Thanks.

Maybe I have some pictures...
G

You do great work and fast too! I'd still be fiddling with #1 piston rings with 5 to go! Thanks for sharing all the pics. Gonzo
OP

I do have one. Let me get to my computer to send it.

Here they are in their freshly exposed and grimy glory; both tubes are visible (and wow, doing what I described above = Total Recall...).

I've yet to encounter any that have come loose, and I just install them with moderate force, and a smear of Loctite 518 sealant.

And just because it was brought up earlier in the thread, the oil slinger!

Depending on which end of the crankshaft I'm working on__flywheel or damper__a block of wood between the nearest counterweight and the block to hold the crankshaft against loosening/tightening torque. Nut size clearly shown. The oil pan is one of the first pieces to come off, and the last to go on.

and another pic of the same thing 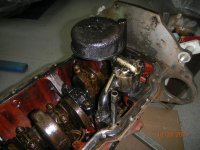 the larger diameter pipe goes in the #4 main bearing. on my car it was not straight up. it leaned toward the center of the engine. just be careful when you go to put yours on not to cross thread it trying to get it to go in verticle.
E

Be sure to mount the throttle cross rod assembly onto the firewall BEFORE you drop the engine/ transmission in!
A wise man knows he knows not. Lao Tsu
OP

elrey, thanks. all done with new bushings.
E

Teflon or standard bushings?
A wise man knows he knows not. Lao Tsu
B

Drone dog
Nice looking work.
Might I ask what you used for engine paint?
Thanks
OP

the car came with a can and a half of moss paint. I know... rattle cans. But they were there. I did metal prep everything. Bead blasted all I dare. And the painting was done at the least 2 months ago so it has had plenty of time to cure. The paint is the one thing I would change if I were to do over. Rattle cans are just not as good and I have the guns to paint. Looking back it was silly, but once I committed, I stuck with it.

Look back and search threads on this. There is a company that sells qts of good quality paint. Not that moss isn’t.. for a rattle can. I believe the paint is only 60 bucks for a qt. The rattle cans are nice for touch ups though.

If the arms are not tack-welded to the rod, they might slip after install (ask me how I know), you might want to either weld them or use a strut. This was flattened 5/16" fuel line. 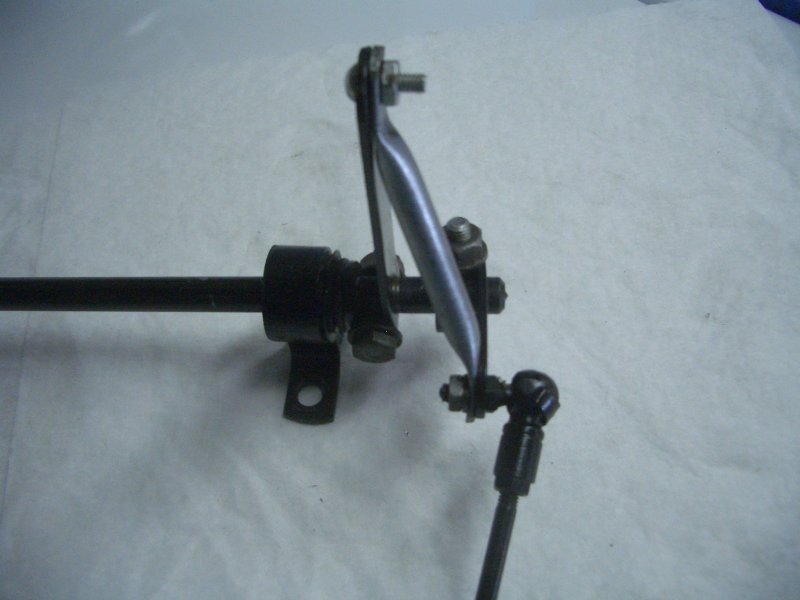