Offline
I finally found some paper carb air filters that would fit on my TR3. I had to fabricate the backing plate that bolts to the carbs since the mounting must be offset just as the stock TR3 metal mesh air filters are offset. I bought the Mr Gasket kits, number 1486 at O'Reilly's. The kit comes with a nice "blingy" chrome cover plate that fits the 6-1/2 inch diameter filter. The 1486 kit is for a 1-1/2 inch thick filter and cover plate. The 1-1/2" filter alone is number 1486A. With the offset backing plate I fabricated, there is plenty of clearance of the inner fender and of the bonnet (hood). Since I only have a saber saw to work with for cutting the metal it was a somewhat big job to fabricate the mounting plates. Would be a lot easier with a good flexible band saw. I used 16 gauge sheet metal for fabricating the mounting plate. That seems to be heavy enough. I have attached a few pictures of the mounting plate and the completed installation.
Regards,
Bob

Offline
Nice work! How did you get the outside edge so smooth with just a saber saw?

Offline
Thanks Tom and Randall! Here's how I cut it. I scribed the outline onto sheet metal using a cardboard template. I measured and trial fitted the cardboard template several times before cutting the metal. I drilled and cut the carb inlet holes first while my sheet metal was still a good size so I could clamp it to a long wooden box. Then I cut around the outside perimeter leaving it just slightly outside my scribe line. I then used my stand grinder to smooth the outside edge holding it perpendicular to the stone and turning it quickly so as to not take off to much in any one area. Then I clamped into my vise using a 1x4 on each side and filed the edges with a coarse file. Then finally I filed the outer edge with a real fine file. It is important to clamp the sheet metal tightly to the wooden box very closely to where you'll be cutting since the saber saw will make a mess and not cut good if it is not clamped down firmly. Takes many moves of the metal to get all the way around the circle since only short sections can be cut before the clamps get in the way of the saber saw.
Regards,
Bob

Me too,unless some product development guy at one of the big 3,MM,VB,TRFsee this and decide to produce,so I can order some.
Thans for posting the pics.
Tom

a different question(s):
how does your heater valve work?
what's going on with the electrical works on the bulkhead?
and lastly, what is that long heavy gauge wire that runs along the front wheel well( brownish orange)?
Guy
1960 TR3A TS63684L
OP
T

Offline
Guy, That heater valve is from an old International pickup truck. I found it on the internet. There are also some that are very similar but in plastic I chose this one because it is all metal. It works very well. I used an old TR250/TR6 hard wire choke cable and cut one wire off of it. I had to fabricate a small "connector" that slips on a peg on the valve for the choke cable wire to go through and threaded a screw in it to hold the cable wire. I had an old heater control knob from my TR250 so I used that on the inside of the car. It fit perfectly on the inside end of the old choke cable. I fabricated a small bracket that I bolted to the dash with the original dash mount bracket, so no new holes.

On the wiring on the bulkhead, I installed a GM alternator using the McMasters instructions. So I disconnected all the wires except the ground from the old fuse box. The heavy brownish wire is to bypass the main wiring harness for the alternator charging since I have not replaced the old 50 plus year old wiring harness. Unfortunately this also bypasses the ammeter. I also have a bright orange label up on bulkhead to identify that the car was converted to negative ground. I wanted to make sure that was very clearly noted and visible near the battery. Note, this in not a show car. I have several labels and green tape stuck in various places that make it easy for me to remember things.
Regards,
Bob

Offline
I've done a lot of the same electrical conversions on mine, though I required complete "kits" for my conversions, as I couldn't figure it out otherwise.

what about the orange bolt covers(?) on the carb insulators?

Offline
I'm pretty sure Bob (TuffTR250) meant Dan Masters, not McMasters when he referred to the alternator swap: Right ?

Guy, the orange silicon covers on the carb insulators are covering some small brass hose barbs I installed in the carb insulators in order to connect a vacuum gauge to the intake manifold. I saw that on some forum some time back. It works fairly good. I connect both barbs to one vacuum gauge assuming that will give me a correct vacuum reading across the entire intake manifold.
Regards,
Bob

Offline
Porting the insulators is a very good idea, for your vacuum check.
no permanent alteration to the intake manifold either.

i wonder if you could get an accurate airflow vacuum reading from each carb. From those ports?
or would the cross link from the intake manifold influence it.
it would be handy, not to have to remove the air filters to ck & compare airflow.

GTP1960 said:
Porting the insulators is a very good idea, for your vacuum check.
no permanent alteration to the intake manifold either.

i wonder if you could get an accurate airflow vacuum reading from each carb. From those ports?
or would the cross link from the intake manifold influence it.
it would be handy, not to have to remove the air filters to ck & compare airflow.

You couldn't measure air flow but I think you maybe could use those ports to balance or sync the carbs.
I have several instruments to measure differential pressure,a Veloci-calc digital and the analog Magnehelic.These gauges have a + and -port,that you hook up,one to each port,doesnt matter which,and you would want a 0 reading,no pressure difference.But I don't have the ports so haven't tried it,and the location might not be the best.
I used the velocicalc with cardboard tubes mounted to front of carbs to measure air flow into the carbs but after playing around I don't think its any more accurate than the sound method.
Tom

For the TR3, IMO the "SU Tool Kit" has the hot setup for balancing the carbs. No need to remove the air filters or guess at how loud the noise is. Plus, you can watch how well they stay synchronized as you open the throttle. Any lag caused by deflection in the link between the carbs is obvious (and can actually be adjusted out, if you want).
Randall
56 TR3 TS13571L once and future daily driver
71 Stag LE1473L waiting engine rebuild
71-72-73 Stag LE2013LBW waiting OD gearbox rebuild

TR3driver said:
For the TR3, IMO the "SU Tool Kit" has the hot setup for balancing the carbs...
Click to expand...

I assume you're referring to those bent wire thingies that replace the dampers and rise with the piston showing relative height of the pair?

Bit of a run-on sentence there.

Photos borrowed from an MG site: 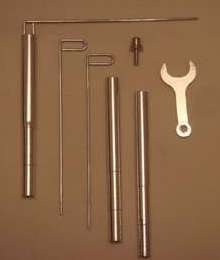 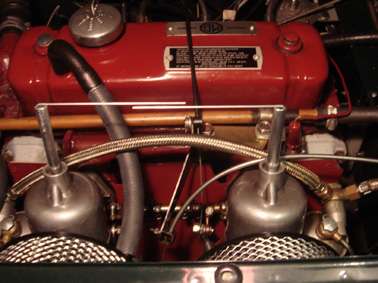 Geo Hahn said:
I assume you're referring to those bent wire thingies that replace the dampers and rise with the piston showing relative height of the pair?
Click to expand...

Thanks for showing that mg pic. I never bothered to read the directions before I lost them.

Geo Hahn said:
I assume you're referring to those bent wire thingies that replace the dampers and rise with the piston showing relative height of the pair?

Bit of a run-on sentence there.

Photos borrowed from an MG site:

I tried this SU tool kit (air flow) on my TR3A.
seemed to do what it is supposed to do.
but I'm wondering how close is close enough?
carb one would raise about a rod width (1-2mm) above carb two.
then #2 would catch up, and they would remain level.
this senerio was consistant at all rpm's.

Any pearls of wisdom?

Offline
Honestly, I think carb synchronization is over-rated. Even with it pretty badly off, all you get is a bit more vibration because some cylinder are pulling harder than they would if all 4 were pulling evenly.
Randall
56 TR3 TS13571L once and future daily driver
71 Stag LE1473L waiting engine rebuild
71-72-73 Stag LE2013LBW waiting OD gearbox rebuild
Similar threads