Offline
The boot of my car was previously wrecked and repaired. I had so re-do all the filler from metal. I've now got it blocked with evercoat rage gold.

Now I either need to putty the pin holes and defects or use a glaze coat and block it again.

Any recommendations? Evercoat has several products in the glaze/putty family.

Offline
Rage gold is good stuff. My later work is better that when I first started. Small areas are easy to do with just filler. Larger areas are harder to do without defects. I could fix the imperfections with more filler, but glaze is supposed to be easier to spread and sand. It is designed to be the final coat before primer. It is thinner and should self level better too.

My reading this afternoon while flying says to use Evercoat metal glaze, but they have several products in that family. Just thought I'd see what others here have used. The whole boot has filler on it now, but it was not applied all at one time. A final continuous coat of glaze will give me a better chance of it not looking like a shade-tree paint job.

I've put on more since this pic. The area towards the front of the car had no dents but was not flat. I also decided to fill all the holes for the hood mounting hardware and the defroster vents. It is now permanently a topless roadster.

After seeing JimFlorida's white bugeye pics, I've been inspired to paint the engine bay white, that looks awesome. Back when I was going to roll my paint, I decided to spray the engine bay with truck-bed-liner. The idea was that it is tough and provides some texture to minimize the prep. I'm going to scuff-sand it and shoot it white too, since I've now decided to spray the whole car. 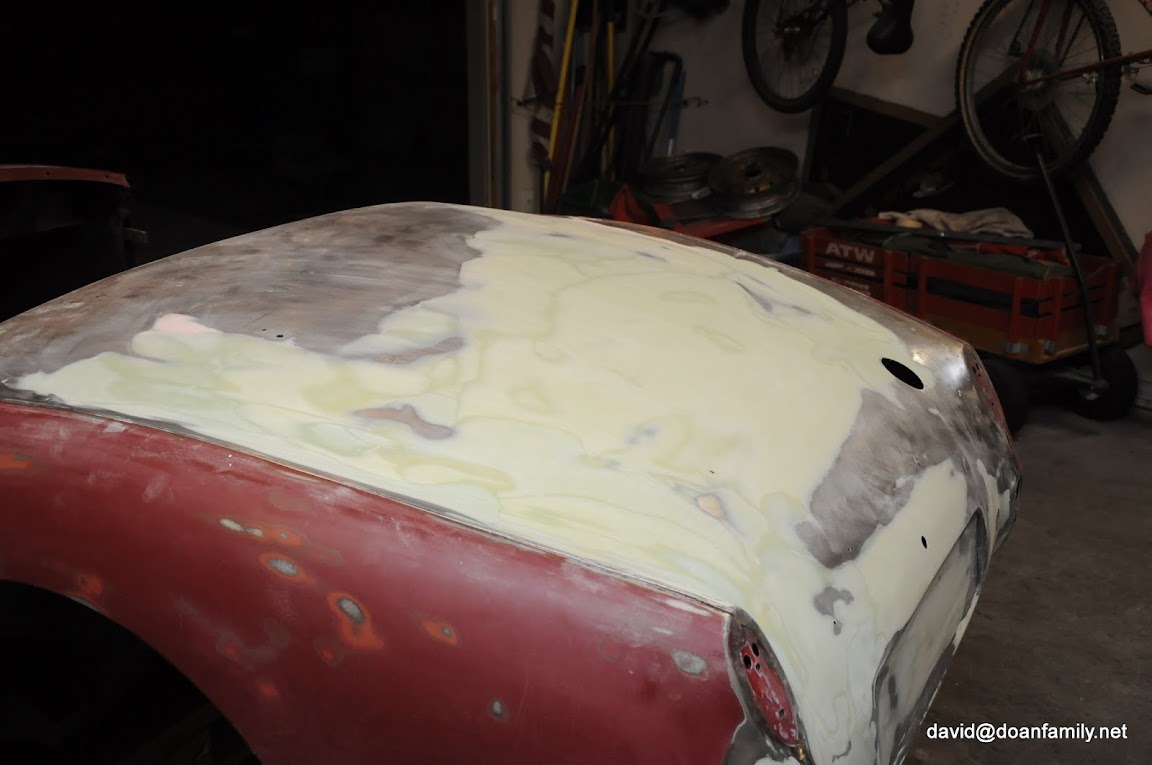 Offline
My car had been rear-ended too. The PO had it repaired and the car painted. It had sat for several years since. The repairs were not very well done and the paint suffered from damage while in storage so I decided to paint the entire car. The rear of the car with all the contours was a nightmare after the original work. But I finally am satisfied with it.
I used a high-fill primer. Sprayed primer and then block sanded. Took three coats but I am pretty fussy. I am nearly finished blocking the third coat and should be ready for the black on my rockers today or tomorrow (74 Midget).
Tom
76 TR6
74 Midget
www.madbrits.org/
www.mg3club.org/

Offline
Glazing compounds are really good. Evercoat makes one the I like but don't have any right now and can't remember the name. You can't build much with them but they do eliminate those pin holes. Be sure to use one that has a catalyst though. Also, most any high build primer will do the same thing.
Was Man nicht im Kopf hat muss Man in den Beinen haben
'48 Ford Prefect
'67 Sprite (project)
'74 Super Beetle
http://enfoprefect.org