The saga began when serpentine belt broke a few weeks back and cut upper radiator hose. I decide, since car has high miles that I would replace several parts of the cooling system. So, at first I replaced the water pump and the thermostat and housing, as well as the upper and lower rad hoses.

Put it all together and bled the coolant and discovered was still leaking somewhere - but could not determine where. Took to BMW dealer and they did pressure test and said the thermostat housing and water pump were both leaking, as well as the two plastic pipes that run under the intake manifold (they go to the heater core).

So, even though the water pump was new, I bought another new OEM water pump seal and also a new OEM thermostat housing seal. Replaced those and also replaced the heater pipes that run under the intake (removing the intake is a pain in the ....). I decided to go ahead and replace all the other hoses and, while I was at it I replaced the expansion tank as well. At this point everything is new except the radiator.

Got it all buttoned up tonight and took for test drive, confident that all would be well. Pulled into the garage I could smell coolant and found that it appears the water pump is still leaking - I think anyway. Looks like it's leaking from the bottom area. How could this be? Is there some magic trick to putting these water pumps on or is it possible the new water pump is just bad? Or maybe I have a cracked block? VERY frustrating.

Any thoughts or ideas would be appreciated.

Offline
If you have full coverage I suggest killing it with fire.
Cheers,

waltesefalcon said:
If you have full coverage I suggest killing it with fire.
Click to expand...

If I can't get it fixed in the next week I''m considering donating it to charity.

Offline
Wish we were closer geographically. After replacing the shattered oil pump in that V6 G37, your water pump issue should be a cinch!

DrEntropy said:
Wish we were closer geographically. After replacing the shattered oil pump in that V6 G37, your water pump issue should be a cinch!

I wish you were closer too! I could use the help!

Offline
Did it overheat and warp any of the mating surfaces?
Have you tried any of the ultra high temp gasket stuff in a toothpaste tube that is for aluminum surfaces that don't use gaskets? I've currently got Reinzosil in the toolbox, but have also used a Yamaha product that you can buy at the bike shop.
Jim Farris
56 TR3 - Salvador Blue
73 TR6 - Pimento
13 Mini Cooper S Bayswater Edition - Blue

Offline
Basil you may not be holding your tong right. And it's BMW you know they lost the war and are still trying to get back at us. Kidding PBS could use it

Online
Replaced a water pump in my Ford some years ago. A transverse mounted engine so getting to the pump was a challenge to say the least. Got the NEW one in and a couple of weeks later it was leaking again. As it was still under Warranty, the auto store promptly replaced it but it was a royal headache to do the job over again. The second one did not leak. So yes, it very well could be a defect in the pump you got from the dealer.
Elliot
Central PA
1973 TR6 Damson Plum / Biscuit interior, HVDA 5-speed, Good Parts Hubs
1976 TR6 White/Biscuit interior SOLD
Nostalgia isn't what it used to be.
P

Offline
Is it leaking from the hose or under the water pump housing? Do you have a new gasket with some Aviation Permatex or other non-hardening goop on both sides of the gasket?
OP

pdplot said:
Is it leaking from the hose or under the water pump housing? Do you have a new gasket with some Aviation Permatex or other non-hardening goop on both sides of the gasket?
Click to expand...

I may have a bad "new" water pump. (By the way, this pump only has a large circular rubber seal that sits in a groove aft of the impeller - there is NO gasket for this water pump).

I got a loaner Coolant Pressure Testing kit from Auto Zone ($250 deposit). I removed the front pulley and electric fan on the car to allow access to the pump. Then I stuck a mirror under the water pump. I started by thoroughly cleaning off the coolant from the bottom of the pump. Whilst looking at the bottom of the pump I began to pump the tester to apply pressure to the system. As soon as I started getting some pressure in the system, but well before getting to max specified pressure, I could see coolant begin to come out of the little half-moon weep hole on the bottom of the pump. Now, I know that some coolant out of a weep hole is to be expected but this seems excessive and was getting on the belts when the car was running and thus coolant was being flung all over the various front components of the engine. By the way, the weep hole on my original pump was much smaller - maybe 1/32 inch. This "weep hole" on this (after market) pump is much larger.

By the way, the reason I got this You can see from attached picture where the leak is coming from. From looking at the design of my original water pump (and this one is very similar except for the location and size of the weep hole) it would seem that for coolant to be leaking from the weep hole, it would indicate that coolant is getting past the seals in the impeller. This makes me think that perhaps I got a bad "new" pump. 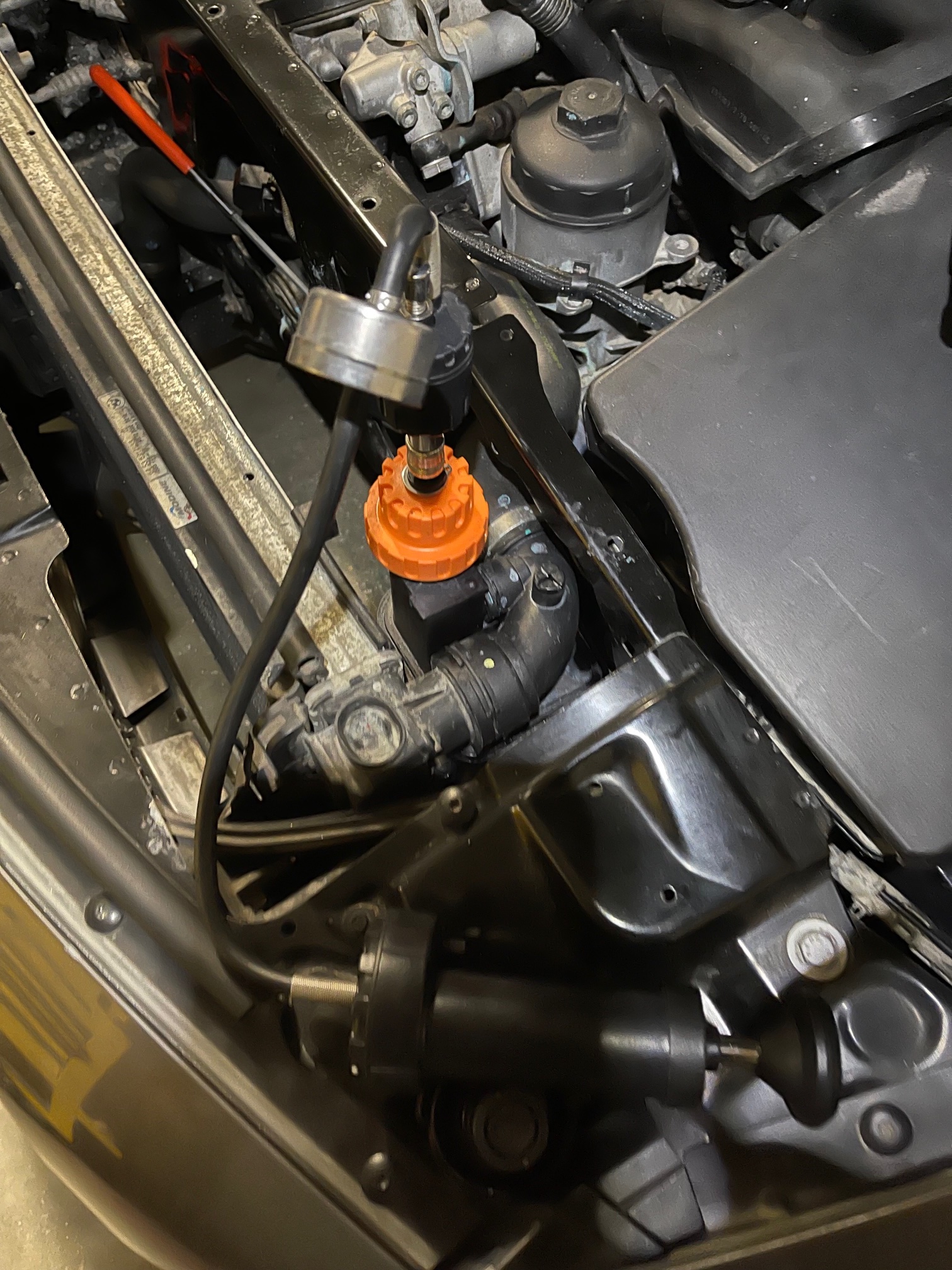 Looking at underside of water pump as pressure is applied​ 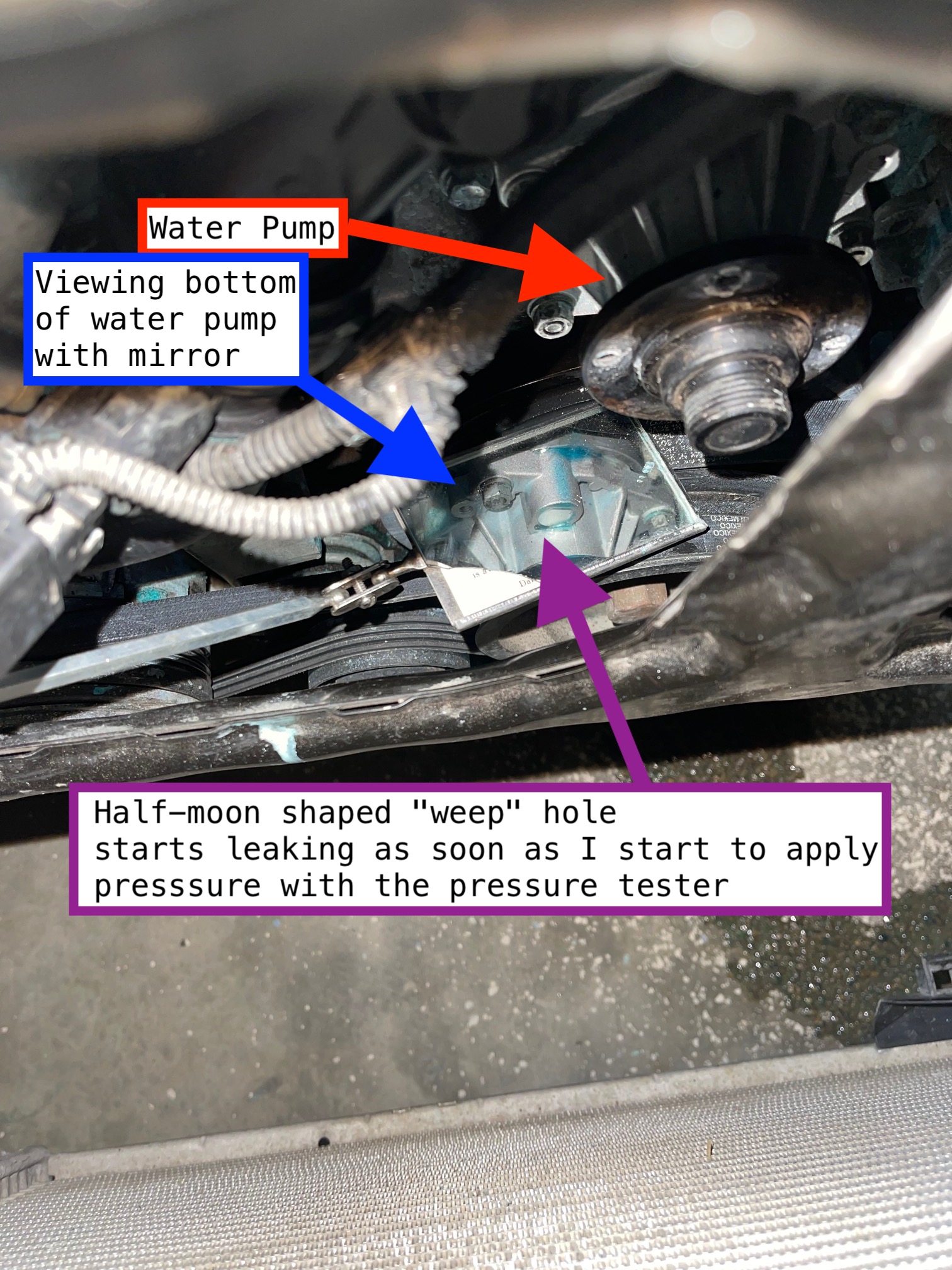 Boss
Offline
Ok, I just read this disclaimer on the page for the pump I bought: "Every belt driven water pump has a weep hole that might leak a little in the beginning. Some seepage from the weep hole is normal during the break-in period (about 10 minutes), and does not indicate a defect."

So, maybe I don't actually have a problem? Think I'll button it up and drive it a bit longer to see if the leak continues or slows down/ stops or gets worse.

Offline
Never heard of or have seen a disclaimer like that. But it would be prudent to give it some time before you go through the exercise of pulling that thing out again!

DrEntropy said:
Never heard of or have seen a disclaimer like that. But it would be prudent to give it some time before you go through the exercise of pulling that thing out again!

Hope the disclaimer turns out to be the case.
Click to expand...

Well, the conundrum is this: When I first replaced this water pump, I took the car to BMW to have them pressure test the cooling system as I knew I had leaking from somewhere but could not tell from where. This involved a drive clear across town (about a 40 minute drive). By this point I had installed a new WP and new Thermostat/ housing and new upper and lower radiator hoses. The BMW dealer reported at that time that the water pump, the thermostat (and housing - all one unit), as well as the plastic heater pipes that run under the intake manifold were all leaking. So, I bought a new WP seal and a new Thermostat gasket and pulled the WP and Thermostat and replaced the new seal and gasket. I also replaced the two heater pipes (these go from the front of the head and run under the intake manifold. These are a bear to change as you must remove the intake manifold (a $2500 job if the dealer does it). I also installed a new expansion tank since the car has high miles and these are prone to failure.

Long story but the gist of it is that this WP has been run for much longer than 10 minutes and is still leaking a good amount from this weep hole. Given that it is such a pain to replace and I have most of it apart now, I think I'm going to go ahead and get another new (but different brand) water pump and go ahead and replace this one while I have it all apart.
Last edited: Nov 28, 2021

Basil said:
I think I'm going to go ahead and get another new (but different brand) water pump and go ahead and replace this one while I have it all apart.
Click to expand...

Probably a "best guess" solution. A real pissah to have to do some company's Q.C. for them. It's a lot of work for no reward.

DrEntropy said:
Probably a "best guess" solution. A real pissah to have to do some company's Q.C. for them. It's a lot of work for no reward.

It may be helpful for someone about to undertake this job to indicate the pump brand? Just a thought.
Click to expand...

I bought it from Rock Auto. Beck Arnley with a metal impeller. I bought a AC Delco from Auto Zone and replaced it tonight. Fingers crossed but so far no sign of leaking.

The guy at AZ right away said I got a bad seal from the factory. Said it’s happened to him a couple times (this guy is actually very good and is the one guy I always look for when I have a technical question- he really knows his stuff)! Anyway, I’ll take it for long drive tomorrow and check for leaks. If none (hope) I’ll button it all up and call it good.

Offline
hmmm. Beck-Arnley has been fairly reputable. They need to hear about the defective pump and Rock Auto has a fair return policy.

Offline
Don't know how much yours is "weeping", but I first learned about weep holes when I replaced the pump on my ol' Mercedes. And it did indeed weep a bit when first installed. Is the weep hole where the coolant is coming from?

NutmegCT said:
Is the weep hole where the coolant is coming from?
Click to expand...

Offline
Thanks. I'm thinking that's the largest weep hole I've ever seen on a pump. Maybe the hole itself is more a "pinhole" inside that half moon?

NutmegCT said:
Is the weep hole where the coolant is coming from?
Click to expand...

Yes. See the picture I posted. I know a little weeping is expected but this was excessive.