Offline
Last Friday my TR3 started puffing white smoke. By the time I got her home she was plenty hot (maybe 250+) and putting out a pretty good smoke screen. I pulled the head and was a little disappointed NOT to find an obvious rupture in the gasket. I can tell from the piston that #2 cylinder was definitely the problem, but only a little "wrinkling" on the side of the gasket near the water passage hole. I was expecting more.
I see no visible sign of a crack in the head. The head remains dead flat... no warpage.
Is the gasket the problem? I sure hope so.
Russ

Offline
Photos might help. But from that description, I don't even see why you suspected a blown head gasket and not say, low on water (maybe from a slow leak some place) or a water pump failure. That said, I have had gaskets that leaked just a little bit and were not obviously defective when removed. Usually though, there is at least some discoloration at the leak.

Before you put it back together, be sure to check the liner protrusion on both sides. Two engines in a row now, I've found that the protrusion is out of spec only on one side; and both engines had head gasket problems.
Randall
56 TR3 TS13571L once and future daily driver
71 Stag LE1473L waiting engine rebuild
71-72-73 Stag LE2013LBW waiting OD gearbox rebuild

Radiator was full when I first noticed smoke.
Compression 150 all around.
Best I could check liner interference is 4-5 thousandths
J

Offline
I had 2 blown head gaskets on my old TR3. We did a pressure test and decided that it was essentially the same as above, iE: the sleaves were not protuding enough. After a blown head gasket, I suggest that you replace the figure eight gaskets. The water vapor increases pressure and flattens them out.

Offline
So the puffs of "white smoke" were coming out of the tailpipe?

My experience has always been that the first thing a leaking head gasket does is start blowing water out through the radiator overflow (when the leak is between coolant and cylinder, of course), since when a cylinder fires the pressure inside the cylinder is much higher than in the water jacket. Which leads me to ask how you knew the radiator was full?
Randall
56 TR3 TS13571L once and future daily driver
71 Stag LE1473L waiting engine rebuild
71-72-73 Stag LE2013LBW waiting OD gearbox rebuild

Offline
A buddy of mine in my local club recently had the same experience and symptoms with his 3A. White smoke, temp pegging. Nothing blowing out the radiator though. Jury is still out on the cause, but the lead suspect is the gasket after pulling the head and inspecting. In his case the engine was a pretty fresh rebuild - after about 6 months of driving he was surprised to find the head torque was quite low (around 80 ft lb or so) compared to the factory of 100-105. Perhaps in his case not re-torquing after 500 miles didn't provide enough clamping pressure on the head which lead to his problem.
Randy
59 TR3A - running
70 TR6 - running
64 TR4 - now with the next custodian
OP

TR3driver said:
Which leads me to ask how you knew the radiator was full?
Click to expand...

I hear you. Actually I was basing my statement that the radiator was full, on the fact that the temp was normal for the car (185ish) when I first saw the smoke. By the time I got her home she was low on water and steaming out the exhaust on acceleration. But not belching out the radiator fill.
I'm waiting for a stud set then I'll put it together.
Question: Seam side of copper gasket against head or block?
OP

Jerry said:
After a blown head gasket, I suggest that you replace the figure eight gaskets. The water vapor increases pressure and flattens them out. 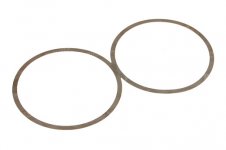 2 of them go down in the recess: 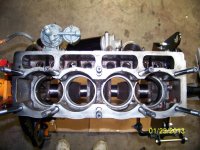 Tim Tucker said:
these little fellas:
View attachment 25551
2 of them go down in the recess:
Click to expand...

Whoa, I don't plan on pulling the liners. That seems excessive to me. Am I making a mistake?
H

Offline
I would think if it was the figure 8's you would have water in the oil ?
Noticed that it was said the head was crack tested and there was no warpage. Has the head had any work done to it ?
My 2 cents would be to make sure everything is clean & bright before replacing the head gasket.
Making sure it fits on the liner tops correctly. Fill the rad, run it up to temp; watching the rad overflow.
I had one engine (14.5 compression) where I had to neel(sp) the copper gasket; finally gave Cometic a call
and solved the problem.
Good Luck,
Harry

Offline
I don't think so. In all the times I've overheated TR engines (including things like limping home without a water pump pulley), and/or blown head gaskets; I have never had a problem with the figure 8 gaskets. Unlike the head gasket, they are solid steel (or copper) and only have to seal against the cooling system pressure. (knock on wood)

Offline
And at the risk of sounding pedantic... the British would call them Figure of Eight gaskets.
S

Offline
Yea cracked head, head gasket, cracked sleeve any of that stuff you would have had to pull the head anyway. I usually look at the oil in the water and water in the oil when I think head gasket or major mixing going on. I have had cracked heads with no water in the oil as the water was going out the tail pipe, so have that check by an expert.

TR4nut said:
- after about 6 months of driving he was surprised to find the head torque was quite low (around 80 ft lb or so) compared to the factory of 100-105. Perhaps in his case not re-torquing after 500 miles didn't provide enough clamping pressure on the head which lead to his problem.
Click to expand...

How often should one check the head torque? Until reading this post, I've never thought of it. Of course, I'm not dealing with a rebuilt engine. Didn't see anything in the owner's manual.
Best, Kevin Browne
'59 TR3A #TS58370L
Look for The UnXplained on The History Channel

My experience has been that it's not necessary after that; but it certainly can't hurt to recheck later if you want. I'd wait until getting ready to check the valve lash though, since you have to remove the rocker shaft.
Randall
56 TR3 TS13571L once and future daily driver
71 Stag LE1473L waiting engine rebuild
71-72-73 Stag LE2013LBW waiting OD gearbox rebuild

Offline
BTW, Russ, while you've got the head off, try spinning a new 1/2-20 nut down each of the head studs. If it binds about 2/3 of the way down, the threads on that stud are probably distorted and the stud should be replaced. Running a die down them to clean up the threads is not a good idea.

Also make sure the hardened flat washers under the head nuts are present and in good shape. People sometimes substitute common hardware store washers, which can crush under the load and cause the studs to lose tension. And even the original factory washers wear down after enough on/off cycles.

I like to install the head gasket smooth side down, as mentioned in the early editions of the owner's manual. But I'm not convinced it actually makes any difference; that information does not appear in the later manuals and the gasket was modified to allow installing it either way. Just seems to me that the folded edges of the gasket might be more secure against the larger surface of the head.

I hesitate to mention this, as it's strictly a kludge and perhaps not appropriate for you since all your liners stand up as they should. But on my TR3 engines where the liners don't stand up far enough, I've been tack soldering a ring of 26 AWG "half hard" bare copper wire around each cylinder, just outside of the folded edge of the head gasket.

I have not had a single head gasket problem since I've started doing this, even on the engine in my (now wrecked) TR3A that used to always start leaking within 3 months of a new gasket. I even reused one of the gaskets, and it still held the second time. YMMV

Offline
I've got a new stud set on the way. Some of the washers I found under my nuts were spring type lock washers. One of the long studs wasn't down all the way. I don't have a pulley tap long enough to get down to the threads so I've ground a notch on the lead of the old stud and I'll run it in and out of the tapped hole to clean it up.
I've seen the wire trick somewhere else... good idea. I think I'll have to see a few more failures before I try it.
I've searched for a particular tightening sequence and haven't found one. I assume I can work from the center out on a staggering pattern?
Lastly, do you lube the nuts, threads, washers?
H

Offline
I've never put in head bolts nor connecting rod bolts together dry. ARP set comes with their own lube. If you're
using the standard set, I've always used some 30wt. oil. As mentioned before get the correct washers.
There should be a torque sequence in the manual somewhere.
Harry
Similar threads