Offline
Hi Guys,
After spending a day at Sears Point raceway (aka Infineon) with some friends for
'track day', I'm starting to get the bug. I can see how racing can become VERY
addictive. As it turns out I have a 1976 Jag XJS that is just sitting here. Its got
a 4-speed manual transmission and is far less than pristene. In fact I've been thinking
of junking it. The original V-12 engine is shot (sucked a valve when a vave seat came loose)
but I bought a later 'HE' engine that could go in.

At the races the vast majority of cars were Miatas, or other Japanese cars and Corvettes.
My first thought, if I jump into this, was to build a Miata. They are cheap, nimble
and lots of race parts around. However I'd like to do something unique and maybe
a bit challenging while still being a serious competitor long term. Plus, as you will see
in my signature, I've always been into Britmobiles. Do you guys think an XJS
would be capable of this? Is anyone else running an XJS?
Steve
ps-this would be strictly for road type tracks, maybe Lemons
MGTD, A-H 100-6 (BN4), A-H 3000 (BJ8), Bugeye, MG Midget(MkI),'78 Midget, Jensen-Healey, MGB-GT, TR4A, '78 Corvette, '64 Lincoln, 240Z, Mercedes 450SLC and 350 SL...and STILL married!

First thing I would suggest, is determine which road racing organization you want to participate with. They're not all the same, SCCA, CSRG, SVRA, Lemons all have a little different rules for car qualifications and preparations. The historic groups might be a long shot for the XJS, unless you want to make the investment. Lemons might be the best bang for the buck with you Jag.

After racing Spidgets in college, I hung my helmet up to raise a family and focus on a paying gig. I returned 20 years later with a period correct 1957 100-6 MM vintage racer. Its expensive to race and maintain with a long learning curve if you want to be fast. There's usually only one or two big Healeys on the grid and I wouldn't trade it for the anything. If you're serious about racing a LBC, the Midget/Sprite would be my suggestion.

BTY, Sears Point is one of my favorite tracks. Here's a race video of mine from last springs Sonoma Historic Motorsports Festival: 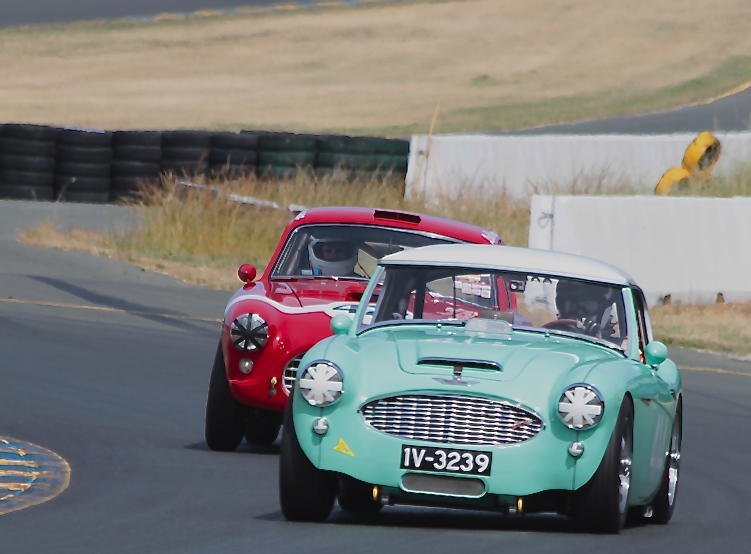 Offline
I'm 100% in agreement with dougie.

Determine what road racing group you wish to join and then build a car to suit that particular group.
Do not just build a car that you imagine might be OK and then try to find someone to accept it (especially on the west coast where it appears that rules are slightly more strict).

I'm on a board of an east coast club and I have seen some cars that owners built or bought with the plan of running them with us......they ended up being disappointed because the cars (even if they were very cool) were clearly not suitable based on our rules.

Your best bet is to join a club and go to races before you build anything. Talk to people and get to know how things "work". That's what I did and it really clarified how the club worked. It will be well worth the investment in your time and it will also help you decide on building a Jaguar (or not).

I run about 8 events a year on what is generally considered to be a very slim budget. This means each race weekend ends up costing me roughly $1000 to $1500 (not including the cost of the original car). I do not believe I could afford to race a Jaguar due to cost of maintenance and repairs.
Be sure you have a racing budget that you can sustain.

If you are brave and have the money and time, my guess would be to build that car for SVRA. But I would call Tony Parella before doing anything.

Otherwise, for vintage racing, dougie is correct: something like a Spridget would be a good choice. An MGB or Spitfire would also be good. Probably one of the best low cost vintage racers would be a Porsche 914 (1.7 or 2.0).

On the issue of Lemons:
I ran a Lemons car with a group of my NASA buddies. We ran a bland VW Jetta in an attempt not to be noticed. That was back when they picked one car from each race and destroyed it "for fun". They don't do that anymore partly because so many car get damaged during the course of a "normal" Lemons race.
Some people love Lemons racing but in the end, we disliked Lemons because the level of driving skill seemed to be so low (all of us were licensed NASA or SCCA racers).
The Jetta survived and is now a NASA racer and none of us would ever do Lemons again. If I were planning on running Lemons I'd use a very low-buck Toyota, Honda, .......or maybe a ratty Jetta. Something disposable.

Here's some of the rules of Lemons:
1.4: Claiming Race: At the end of the competition, the Organizers.............may elect to purchase any vehicle from its owner(s) for $500......
1.6: Your Car May Be Destroyed at Any Time: This is racing. Accidents and other unfortunate boo-boos happen.

By the way, 24 Hours of Lemons is at Sears Point next weekend. If you're serious about Lemons, this would be a good one to get out and see.

Offline
Guys,
Thanks for the suggestions and insights! As it turns out, I joined an established
Lemons group about three weeks ago which started me thinking about all of this.
For those that will be at Sears Point this weekend for the race, look for the
gold Jensen-Healey. This is its first outing. And mine. Since I live closeby Lemons will be
my target, initially at least. Thats why my first thought was the XJS. Its rough. We'll see
what happens. For now I'm part of the pit crew which is probably a good
place to learn and decide how far to go.

You said: "I'd like to do something unique and maybe a bit challenging while still being a serious competitor long term."

If you are a competitive person--and surely most of us in this forum are--consider whether that Jag will fill the bill. I have only seen one XJS on a track and I don't recall that it was near the front of the pack. To be sure there are many people who race cars that will never be front-runners and hopefully their needs are being met in other ways. Even if you acquire the requisite skills you might never be a "serious competitor" due to factors such as power to weight, handling issues, etc. And since an XJS will probably be an expensive car to campaign you might get turned off to racing due to limited rewards, etc.

As with others I'd recommend starting out in a simpler manner. A Spridget is relatively inexpensive to acquire, equip and maintain and at the same time can be a very serious challenger.

Offline
I agree with the cost issue in a old XJS with a V12. The stock XJS will never be very completive. Many modifications will cost more that value of the car.

That said, an XJS with a few mods can be fun at the track. They not often seen on the track, therefore get a lot of attention, especially when you pass a Miata or Boxster on a straight.

Offline
A less expensive option that a track is auto cross. Many class options for stock to fully modified. I regularly auto cross my Triumph TR8 is street stock. On occasion have my XJS out for the week end. A great way to build driving skill too.

Offline
Just an off the wall idea....but do look into racing a 4.2 V8 (FORD based) Jaguar S type R. I owned an '05 for 3 years and absolutely loved driving it...400 pure supercharged HP mated to a stout ZF tranny (common to BMW,Jag, Mercedes etc.). Tight suspension, BREMBO factory brakes. An absolute sleeper hotrod...cherished in Europe for its great performance on the cheap....poor man's Shelby. Always wondered what it would be like to strip it down of all the insulation etc. and make a track day car out of it. Unique retro MK2S styling and buckets of performance... same engine as used in the XJ8R and the XK8R which were touted as real beasts....and the S type weighs less!! Best of all, you can pick one up for peanuts if body damaged, high mileage etc. Sold my perfect paint/body/interior...everything working great with 110K miles for $6,500. Yes...a 60's Jaguar Mk2S reiteration in modern FORD hardware. Many parts shared with FORD Thunderbird and Lincoln LS...so cheap available parts. Food for thought.
J

Offline
So many of the cars in the last 10 to 15 year are much more capable the old models. However to me, they lack personality. All are designed to the lower the drag component and tend to look more the same than in the past. The new designed power trains are unbelievable powerful and reliable. I have had the XJS for 32 years. Doing the 3rd engine rebuild, had it third paint, third transmission (Turbo 400, HD 400 and Tremec tko500), so common sense is probable not going to be something that drives me to another track day car. I just like the car. Thank you for the thought.
Similar threads