Offline
What's wrong with my TR4a?
Hello all, Bill here in AZ with a new (to me) 67TR4a with IRS. But all of that is speculative! I've been lurking for a while and scouring the web for pics of Triumphs and I've noticed sever inconsistencies with my car.


First, I see it has the wrong grille. The one that came w the car is for a TR4, not an A.the bumper is also lacks the bumper guards.


Next, I see that it does not have the fender mounted lights and traditional chrome strip that runs along the edge of the fender to the doors on an A.


I also see that it has the 3 snaps on the door that would hold the canvas cover normally seen on a convertible. My car is a targa, not a convertible.


then, (not seen in the pics) it has bucket seats w headrests. Don't know if that was an option on this car, but I don't see pics of other 67's with headrests. Neither Moss nor British Victoria show seats like theses for my car.


I have heard there is also a number on the differential, but I have not crawled under there yet.


I know what the Commision number means, but are the other numbers right?

Its good to see you made it here.

I`m certain there will be a whole bunch of folks that are ready & willing to answer your questions.

Offline
Welcome Bill. Your 4A may be a cross dresser. Agree that pictures help.

The grill being replaced, bumper and no side markers are hints of possible bodywork.

The surrey top is somewhat rare and a great option.

My car has three snaps on the door for the tonneau although I'm unclear how that would attach with a surrey window in place.

Commission numbers for 4A ranged from 50001 - 75172 so its in the range and body number is pretty close as you would expect. The engine # could be closer but someone else may have a better idea.

There's some info, others will chime in.
Richard
65 tr4a

Offline
Looks like at least the front clip is from a 4 not a 4A, except the hood badge is 4A. Doors too as there are no holes for the 4A side trim. Not uncommon to salvage pats from a similar model throughout the years. It would be good to see the chassis and rear end and suspension to see what it really is. Numbers shown are good but those can be swapped as well.
PeterK
1958 TR3A 1966 TR4A both HVDA

Welcome
Don
"Stick a Wedge in it!"
Mount Pleasant,SC

This is one to take a peek underneath to see if you have a 4A with 4 parts, or a 4 with 4A parts - rear suspension, is it IRS? if yes, its a 4A. if no, maybe still a 4A, but check the front suspension - are the lower suspension arms attached via removeable brackets to the frame (4A), or attached directly to pivots welded to the frame (4). Looks like fun, don't let people (like me!) try and talk you out of that hardtop..

Offline
I'll chime in with all the rest. The car has had some repair and makeover to the front. Looks like there is no seam at the front where the fender and valance meet, so fenders could ( but probably not) be 4A, all the chrome mounting clip holes have been filled in. Door gap looks pretty good so damage to the front must not have been that bad. Look at the front inner fenders and send us pictures. I've got everything you would need to dress it back out as a 4A. Overall looks pretty good.

Offline
Welcome Bill. Would love to see more pictures as well. Only additional comments are that the engine number is too early compared to the commission number and body numbers. Also, the seats are probably TR6 seats but need some pictures of the interior.

Offline
Thanks for all who chimed in. Please forgive me for not putting up the pics. It's been many many moons since I was on a forum so my skills are a bit rusty, like the car. There are just a couple of snapshots of it in my album. Until I get home and can pull off the wheels to see what the suspension looks like.

I know it has IRS, because the badge on the trunk told me so! And the lower control arms, coil springs, etc. shoved under the rear are a dead giveaway.

Since I am not terribly familiar w Triumph's, I just trying to find out what possible combinations were possible in any given year. So would they ever make an A with IRS, w/o side marker lights?

when I got this car, I got two tops; one black fiberglass and the other white aluminum. Which one is original?

Offline
The original hardtop section would have been aluminum for the early ones or steel for the later ones. The fiberglass one would be an aftermarket one, but it's worth including pictures of the rear section from inside and outside to verify if it's an original rear section.

Offline
So the one above that JP the 3 guy posted is your car?
Don
"Stick a Wedge in it!"
Mount Pleasant,SC
OP
A 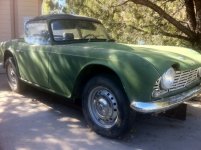 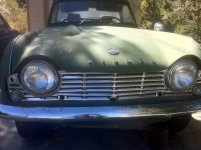 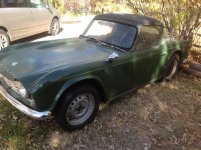 BTW, the above part about me knowing it is an IRS cause the badge on th trunk told me so, was my attempt at humor. Kinda like saying "I know I'm smart cause my mommy told me so"

anywho, thanks Marvin for the info. You are right, the seams on the driver's side do match up well, it's the passenger's side that is disconcerting. The fender lies up well w the A pillar and hood, but the door does not fully close. You can see where someone has attempted to "adjust" the door catch on the car by bashing in the B pillar right where the catch attaches to the car. Or it was tweaked/bent when the front end damage occurred.

The front part of the frame is tweaked. I noticed the radiator guard was hangin all wonky (technical term) so I crawled under there to see why. It was missing 2 out of the 4 bolts that hold it in place. The guard still fits on the outboard sides of the frame rails, but I also discovered that the bumper mount bracket on the passenger's side had a big spacer (14mm nut) in between the outside of the frame/guard. My guess is that was used to align the bracket w the frame and hold the bumper in somewhat alignment.

sorry to make this post longer, but I am just trying to size this puppy up and plan my next move. The motor is toast (burned valves) so the whole thing needs to be rebuilt. Tranny: unknown but I do know it is the 4 speed w/o overdrive :-(. Suspension and brakes: the parts are there in C- condition. Body and paint: C- but the parts are there. Interior: D- condition.

so my dilemma is whether to put $10k into the car and rebuild it, but then I still have a car worth $10k and 100hp and a positive ground electrical system. If it has had front end damage (which is pretty evident) then it will never b a concourse type car.

Or, rip it all out; drop in an aluminum Buick v8 or a boosted Toyota w a bulletproof w50 5 speed. Keep the TR6 seats and redo the interior however I want, pull the body and tub for sandblasting and paint it anything other than BrG, yuck (original for this car according to the Comm plate) and drive the **** out of it.

is it a good enough car to try and restore to original or is this a case where it would never be good enough to be considered "original" so why try.

Take a breath - there are several options before you. Knowing that you won't have a concours TR doesn't seem to bother you. So, your next move is to decide which direction to take. While not being "original", it can still be faithful to the original design, if that's your desire, and you can have a driver. Or as you say, you can resto-mod it to whatever extent your wallet can handle!

By the way, positive ground is a very easy fix.

Whatever you do, keep posting here. Lots of folks have already traveled the road you're on and are willing and able to lend a virtual hand.

Offline
The aluminum center section is the original. Pictures of the dash and dash support / console will help to identify as a 4 or 4A. Of course coil springs in the rear is a dead giveaway that it's a 4A. Based on what you've written my guess is that's built from 2 cars as I doubt someone would fill the holes for the small stainless trim that runs along the front fenders and doors as well as the holes in the front fenders for the side marker lamps on a 4A. Interior pictures will reveal a lot.

Offline
The good news is that a 4A with overdrive and a 'surrey' top is a fairly desirable car.

The bad news (possibly not that bad) is that there may be a fair amount of work to achieve 'good driver' condition and perhaps a lot of work to make it close to correct.

I do not see evidence of rust in those photos -- if a thorough inspection shows this is pretty-much rust free then it may be time to start making a list of what it would take to restore to various levels and decide how much you want to bite off. The cost will, of course, depend not just on what level you seek but also how much of the work you do yourself.
P

Offline
My advice to you - have this car checked out by an expert on this model. Perhaps some of the wise heads on this forum near you could or would help. At least you will then know what you have and a fair idea of what will be needed. Since I know zip about TR4s, I have no advice for you other than the foregoing. If the thing isn't rusted too badly, you have a lot of options, limited only by your pocketbook. A friend of mine here in CT has a 4A in pieces that hes been restoring. I'll take a look at it just to know something about that model. Good luck with the project.

Offline
What is the serial number?
Similar threads