HELP please - across country transport for Car and Chassis ?

Offline
Hi
I'm looking at buying a non-runner Triumph TR in Arkansas together with a replacement chassis. And I need to get them to down to Huston, or better still across to a Western shipping port, or North Beach Florida. Can anyone here help with mover contacts - to do this at low price.
Much appreciated, Thanks,
Bfg.

Offline
Arranging transport in the USA while you're in the UK will be an adventure. Seems like the person selling you the TR should be helping.

Who's arranging the shipping out of the USA?

..and thanks for taking the time to reply and for the across States contact - I'll drop them a line.

I haven't found a shipper yet. Here in the UK I've used Schumacher before, but after 3 weeks and one chase up I've still not heard back from them. I also contacted SeaKargo at the same time, but again no response.. I'm Not Impressed.

I read someone recommending STS_Imports, so I spoke to them. Ron seems to be the man in charge. He gave me an estimate off the top of his head, but also asked for dimensions. I sent him those and a proposal securing the chassis over the car. He replied the following day with the same price. 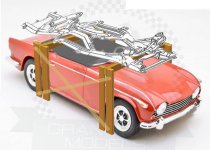 ​
The seller was kind enough to suggest he might make such cradles for me. The price I was given though, for sea freight shipping alone, of these was close to $3000 ! Plus an estimated $1100 for the transport from Arkansas to Huston. He explains it's not just the size but also the amount of man-handling.

I thought the above (chassis over the car) proposal would also work to transport car and chassis overland on a trailer. It seems however that I need to revise my idea - so the cradles with chassis on top actually rests on, is secured to, and moves with the car - so it is just one item to handle.

The reason I asked about transport to any shipping port from Huston to Boston.. was because the car transport costs from Arkansas are going to be expensive whichever direction it goes. BUT if I could tie-up with someone who frequently has an empty-trailer trip in one direction (to any sea port) then that's probably the least expensive way for this to happen.

Just for the car alone ; Sea Freight costs $200 more from Huston to the UK, than from North Beach, Florida. So probably the further up the western seaboard we go the lesser the sea freight's cost. There might also be more choice of shipping agents. So if someone was to be running down, let's say, from Boston with a delivery once month ..but all too often had an empty trailer on the way back, then for a wad of greenbacks - I might get a deal. :eagerness:

Hey, I'm open to any suggestion !
OP
B

but now that I know what to search for (in American English) then there's hope.. Much appreciated Nutmeg Tom

Guest
Offline
On that link, I do not get a bad gateway. What browser are you using? Firefox works, Palemoon/MyPal works. On XP-64.
Works on Ubuntu FF 54.

TOC said:
On that link, I do not get a bad gateway. What browser are you using? Firefox works, Palemoon/MyPal works. On XP-64.
Works on Ubuntu FF 54.
Click to expand...

Might be because he's in UK. If you are able to connect to a different provider (maybe wifi away from home) you might try that. The Bad Gateway is a proxy server error usually. You could also try refreashing the page.

Offline
.
I tried via google search and found the name and google link, but again my old Firefox 47.0.2 didn't want to open it. I have had the same problem with one UK site I simply could not get on. Perhaps it's something to do with my Windows-XP being a little behind the times.

Searching ' Interstate Car Transport US ' on google, I did find others - like this one : https://www.autocarshippers.com/Car_Movers_Auto_Transport_USA.html

Guest
Offline
I am XP. Latest FireFox for XP is 52ESR. Works. In fact, I am on XP right now.

Back-up browser is MyPal, a derivative of PaleMoon, specifically for XP.

Offline
also it might be worth doing one of the bidding sites.

a quick run at the google gives:

Offline
.
Thanks I'll try them

I sent the dimensions and sketch (above) to STS, hoping they might manage a better price. In quick response I got :

" we will still be handling the cradle as a separate item unless it is somehow fixed to the car. . . . but from the pictures you sent the price would be the same as previously estimated. It is not all about space, but the work involved also."

So it's the same as his estimate when the chassis was a loose item.! ..And as said before, that almost $3000 shipping does not include overland transport from Arkansas to their depot in North Beach, Florida. Nor transport costs in this country. It seems the only way this is going to be affordable is if the chassis is securely fastened over the car itself, so it rolls and steers as a single entity.

Today I revised the sketch proposal to use the car's roll cage to take most of the weight (I estimate about 100kg / 220lb for the chassis frame) and front bumper irons to prevent pitching and veer. 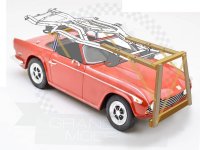 This way the chassis and car are one entity to handle, which rolls and steers. I've inverted the chassis so the suspension towers (front and rear) are turned down. Then the overall is perhaps just 10" more than a low slung TR. There's no additional width, and only 5" extra in overall length.

What do you think ?

Offline
I think it depends on what the shipper thinks, not what we think. Sorry, but that's the reality.

Shipping a car, and a "non-car" to a USA port, then shipping overseas, is always going to cost an arm and a leg. That's the way it is.

One work around (possible?) is to buy passage on a trans-atlantic passenger ship, where shipping your own goods is always cheaper. You'd be shipping "your car" - and a large crate of personal belongings. When I moved from USA to UK about 30 years ago (temp assignment), there was no charge for my car. Cunard, QE2.

(That was *quite* a fantastic way to cross the Atlantic!)

Offline
It's only a car with a roof rack

Bfg said:
It's only a car with a roof rack
Click to expand...

now this jogged my brain - another solution would be a container. If you had a cooperative seller, you could even stick another car in, sell it in the UK and pay for the shipping.