Hello Everyone. Ran my Midget till it locked up

Offline
Hello everyone. It has been a long time since posting for me. I just finished a EE degree and now I can focus back on Spridgets.
I had an interesting thing happen last weekend. The bride and I took the midget up to mount Mitchell and the car behaved flawlessly and that is a pretty steep climb.
I kept my eyes on the gauges and all looked well, but on the way down I took a different route down to the low lands,and on the way down everything still looked OK.
I went down to Marion, NC and then took US 70 to old Fort and was preparing to climb the mountain Via I-40 and I noticed that the car was spark knocking at little bit but the temp looked OK.
I barely got on the interstate and the car started really spark knocking and losing power. Pushed the clutch in and the engine quickly locked up.
We had the top up and it was raining. The car was really smoking once we stopped like I had never seen. It smelled hot. I looked under the hood and could immediately see that the head had gotten so hot that the green paint had turned black.
Evidently the water was so low when I started out that it wasn't really touching the sensor is all I can figure.
I only had a 12 ounce bottle of drinking water. I took the cap off the radiator and it blew steam with very little water. I poured in the 12 ounces of drinking water and it chugged and churned and blew a lot back out.
I had about a mile to walk back down the interstate to civilization and I started out. Cell phone battery was dead.
I figured the motor was damaged but I wanted to see what happened when it cooled down. while walking I came across 2Litre jug someone had threw out. I still had my 12 ounce bottle and I saw that water was running off the road like a creek in one area and I filled the jug and headed back to the midget.
I put that water in the midget and it chugged again but kept some water so I made the trip several times till the radiator was full and I had some extra.
I had an extra quart of oil in the trunk and poured that in as well.
I tried to start it and it fired up and ran decent.
So, then we started back up the mountain for the 6 mile climb and just kept to 45mph and the car ran ok and I could see that the heat gauge was functional.
I made it all the way home. I could not believe it and figured we would need a wrecker.
I pulled the head today and checked for cracks or warpage and I can't see anything wrong with it. How tough it that !
I am going to put in new valve seals and lap the valves and put it all back together.
Or, I have another head that needs valve seals and I may try it. The original head used to sip water and I replaced the head gasket with some permatex copper sealer and it did well for years, and I did not need to check the water as often, or so I thought.

Driving and MG, one is never at a lack of adventure.

Offline
Kim, great to hear from you again! We miss your wisdom and your presence! Quite a story and yes, they are remakable little beasties! Hang around.
John-Peter Smit
1976 MG Midget
1969 Vauxhall Viva GT
1958 Fiat Multipla (Barn art)
N

Offline
Cast iron heads will take a lot. If it had been aluminum you would be looking for a new head.

Offline
Kim,
Good to hear from you! A similar thing happened to a friends Midget back in the day while we were driving across central Alabama. The temp gauge was ok, but the car was acting up and we pulled into a farm just off the highway. I opened the hood and everything was glowing red...scared us to death and we waited until the glow went away and sprayed the engine and radiator with a hose. Not a smart thing to do, but it cooled down quickly and we refilled the radiator since there was nothing left inside. We couldn't find a leak, so we continued on our trip for the next several days with no problems. They ARE tough little engines!
Rut
Rut, '60 Bugeye, '70 MGB, '62 TR4, '66 TR4a IRS, '67 TR4a IRS, '68 TR4a IRS, '72 TR6

Offline
I am having a deja vu moment. I just ordered a head gasket set and looking at the pic there are only 4 valve seals in it. I seem to remember going through this before. Why doesn't it have all 8?
Regards, Kim Webb mgmidgetman@bellsouth.net

Offline
I believe the seals were only used on the intakes.
OP

Offline
Hello Jim,
My god it has been too long. My life has been hectic for the last few years. I must have been crazy to try work and school for a degree. I was was in dayton about 1.5 years ago attending a Motoman robotics school and I thought of you and trying to make contact but it was all a whirlwind. I thought of the south american restaurant that you invited me to. That was awesome food and atmosphere.
I have a 77 midget with a bugeye bonnet that I have put aside for 5 years and want to get back into.

histerical said:
I believe the seals were only used on the intakes.
Click to expand...

I am pleased to meet. That sounds familiar as well, but why. By my thinking the valve seals stop oil from running down the stems and smoking at startup. I would thing that oil and gravity work the same on both type valves.

Offline
Valve seals are used on all the valves. Some people have been known to leave out the seals on the exhaust valve to provide some extra lube to them for high performance engines. I never found it necessary.
They are not just to stop burning oil on startup all the time the engine is running
Joe Schlosser
SCCA National License, Retired
60 Bugeye, since 1966
SCCA FP, sold but not forgotten

Offline
Welcome back. You have been missed.

As stated above, originally the valve seals were only on the intakes. The argument is/was that the intake ports are under vacuum and will suck oil in. The exhaust ports are pressurized and if anything... blow oil back up the oil stems.
Doug L.
'64 Morris Mini Cooper-S 1275
'67 Triumph GT6 Mk1
S

Offline
Make sure you check the blanking plug on the head. The plug will recess when you overheat the engine, leading to a head gasket failure. Ask me how I learned about that one :grief:\
1969 Austin Healey Sprite Mark IV - "Baby Blue" or "B.B."
1953 Plymouth Cranbrook - "Gertrude"

Offline
Good to see you back around, Kim!

These little beasties are pretty tough, even if they do give us fits sometimes.
Drew Frink
'59 RHD Frogeye Sprite :frog: - "Penny" let the rebuild begin!
'66 RHD Morris Minor - "Maggie" alive and driving
'70 RHD MGB - off for an engine rebuild!
'19 Triumph Bonneville T120
OP

regularman said:
OK, where is the blanking plug located?
Click to expand...

It is on the bottom of the cylinder head between the #2 and #3 cylinders, roughly at the 11 and 1 O'Clock positions on the pistons. If you draw a straight line between the two pistons on the bottom side of the head, you'll find it. If you can't find it, that's a good thing -- it means the plug didn't recess.

It's the brass button between the 2 and 3 cylinders: 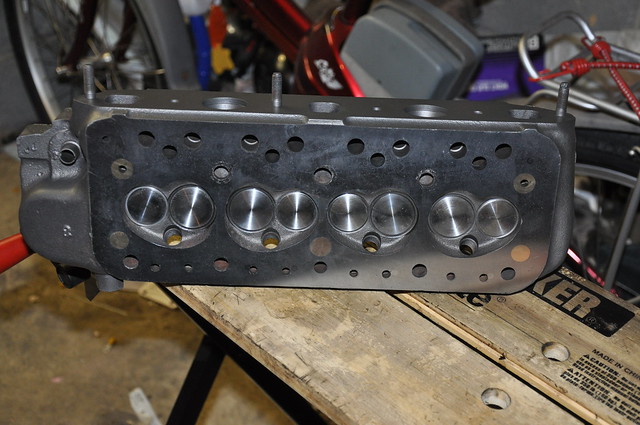 This is the "Before" -- here the blanking plug is at the top between the #2 and #3 cylinders. If you zoom in, you can see it recessed about 1mm -- just enough to toast the head gasket. 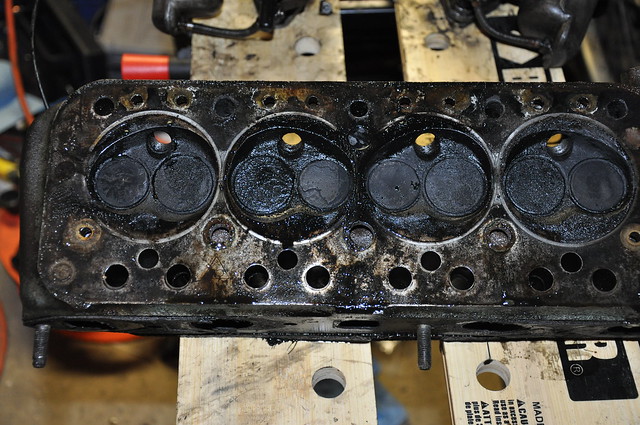 When my Midget was using water a few years back, I found that plug recessed about .002 and that is when I used the copper permagasket head gasket sealer on it. I had real good luck with the stuff on Subaru Aluminum heads (there is a whole story there). When I put it back together it stopped using water and I used to check water every time I drove it. I was finally convinced it was ok after a couple thousand miles and quit checking all the time.
This was my failing for what just happened. I could have checked the water and been fine.
I put some extra super cooling on the car back before I found out about the problem with that plug and used the permagasket.
I have another head that I got from a fellow member here (pythias) and I am going to put the motor back together with that head today.
I checked it over and the plug is fine on that one.
Thanks for the information and I will tell how it goes today.

Offline
Fried a motor at WGI once and pushed both plugs into the head. A local machine shop local machine shop did the repair. Made new plugs with a short leg on them and pressed into the head. The leg made sure that the plug would never move inward again.
I never overheated the motor again so I don't know if the leg really did anything but it was a great fix.
Joe Schlosser
SCCA National License, Retired
60 Bugeye, since 1966
SCCA FP, sold but not forgotten

Joe Schlosser said:
Made new plugs with a short leg on them and pressed into the head. The leg made sure that the plug would never move inward again.
I never overheated the motor again so I don't know if the leg really did anything but it was a great fix.
Click to expand...

I have heard of that repair method. It always sounded like a great idea to me.

I also remember a DIY method where stock plugs were modified by drilling and tapping them with a blind hole so you could put a long set screw in to take the place of the machined leg. In both cases it's necessary to take a skim cut across the head so nothing is sticking up... or sunken below the surface.
Doug L.
'64 Morris Mini Cooper-S 1275
'67 Triumph GT6 Mk1 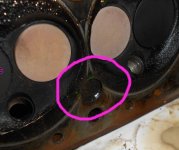 Offline
I had the recessed head blanking plug problem. Gave me fits trying to diagnose it (thinking carbs or ignition)... then I got ****** off and pulled the head, and there it was! The blanking plug goes right across the firing rings of the gasket, and the problem is only noticed upon acceleration or high speed.
Rebuilt the head (and they put in a threaded plug). 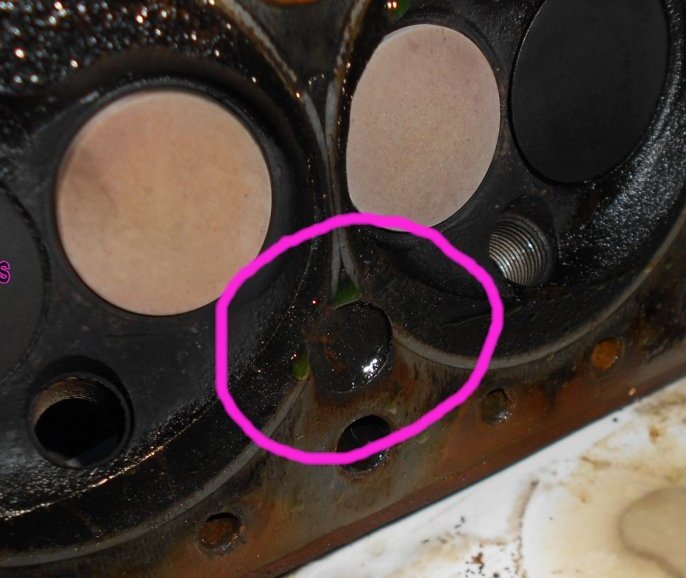