Offline
I rebuilt my 1957 100/6 block and have a later 6 port head to go onto it. After an initial break-in period it was clear my head gasket had not sealed well and when I drained the oil it was full of water. I've stripped the top end back and am reassessing what I did wrong. Lots of coolant in the pistons when I took the head off. Clearly I had a terrible seal. I installed the head gasket dry and used one of the standard Moss head gaskets. I am confident that it was torqued properly and my machinist tells me the mating surfaces are flat.

Obviously next time I will use copper-coat, but what else do I need to do? Payen gaskets are no longer available so is there a similar gasket that I can be sure will seal well? I've read that some people recommend the Denis Welch competition gasket, but that's over $300 plus shipping from the UK. Is that the only good-quality option? Obviously the cost of a mistake is much more than even the highest quality gasket so I'm willing to pay whatever is necessary. AH Spares has an all-steel one that looks impressive as well. I've read how other folks use Hylomar around the water passages, but this seems risky. This is not a competition engine, but I need to get it sealed. Advice from you seasoned engine builders?

Offline
What evidence, if any, is on the defective gasket; i.e. did one of the copper crush rings not get properly flattened? Any other way to tell how the gasket failed? Anything not look right on the head or block? I hope it's not the case, but I've heard that some spots in the walls of the oil galleries are thin and can be eaten away by corrosion (your machinist may not have been able to tell).

I got lucky, I guess; I had a mostly complete Payen conversion set I'd bought years ago in my parts bin I used in my last overhaul of my BJ8. No issues after 7-8K miles. We also rebuilt our BN2's engine and, so far, don't have the infamous leak between #2 and #3; we used Wellseal as recommended by Norman Nock on a Payen (IIRC) gasket.

ps. I'm not a 'seasoned engine builder,' but I've rebuilt several Healey engines with my father, who was.

Offline
pps. (Time limit on editing) Did your builder 'hot tank' your block? I think they usually use lye (sodium hydroxide), but could use acid (usually hydrochloric). If so, it could have removed rust and deposits that kept the oil gallery somewhat 'sealed.'

Offline
I was just looking at head gaskets. IIRC, the Denis Welch gasket is steel and made for competition. Two "premium" copper gaskets are:

Online
Chris, the fact that you had coolant in any of the cylinders upon disassembly DOES NOT indicate a head gasket problem. After 40 years in the business, I can assure you that no matter how well drained the cooling system is, there will always be some left in the head that decides to drain into the cylinders during head removal.

Your machinist tells you "the mating surfaces are flat". Was this checked AFTER your disassembly or before initial reassembly? Were these surfaces machined or just inspected?

When you assembled the head to the block, did you confirm that each nut and washer actually bottomed onto the head surface when torqued? Don't know if there are differences between the studs and nuts for the gallery head and the later head you swapped onto the early block.

What you don't want to hear is that there are other ways for coolant to get into the oil. They all involve cracks in head or block.
C

John Turney said:
I was just looking at head gaskets. IIRC, the Denis Welch gasket is steel and made for competition. Two "premium" copper gaskets are:

John, the DW multi layer steel gasket(aka MLS) is derived from what is a very typical head gasket design in used in modern vehicles. The "competition" description simply indicates that it is recommended if doing a competition build, not that it should only be used for competition. For guys doing a "concours" build, the easily seen tabs where the layers are riveted together would probably cost some points.

Offline
I bought this (.001+- accuracy) specifically to check the flatness of my TR6 head and block. 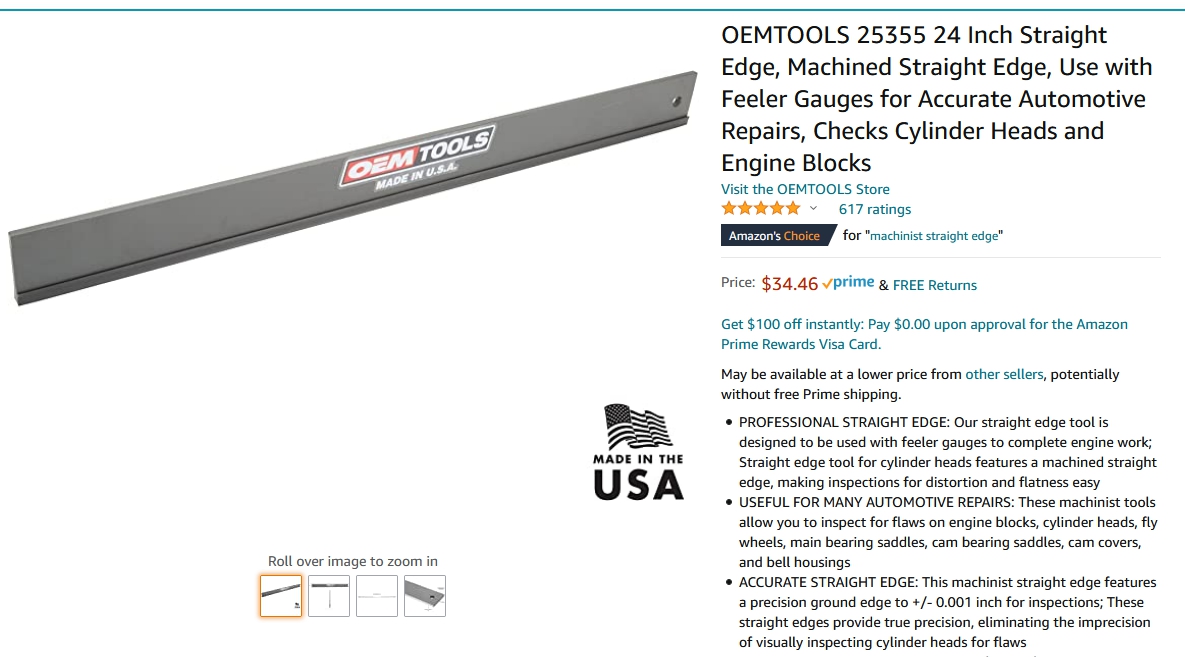