Offline
I had to replace the TR3A starter - the rubber drive thing was slipping. I bench tested the spare that I'd had on the shelf for years and it spun fine.

The install went well, I used a length of wire to hold to the top rear nut in place - that was great, was able to fully tighten it with that set-up:

Unfortunately, it seems that when I tightened down the brass nut holding the cable to the starter it created a dead short inside the starter body. Worse luck, when I tried to start it the short caused the contacts inside the solenoid to weld up and even though I immediately released the solenoid it stayed 'on'.

I always keep the battery ground post loose during such maneuvers but a lot happened in the time it took to grab it and pull it off:

That's the battery-solenoid cable. No other damage other than some melting of the battery case where that cable fell against it.

That & the fact that I am typing all this with one hand while the other hand holds a bag of ice.

Offline
Sorry to hear. I guess it could have been a lot worse. Maybe consider a battery cutoff switch at the terminal.
Elliot
Central PA
1973 TR6 Damson Plum / Biscuit interior, HVDA 5-speed, Good Parts Hubs
1976 TR6 White/Biscuit interior SOLD
Nostalgia isn't what it used to be.

Offline
No problem, a little electrical tape and it will be good as new!

Too bad about your hand, though. Those things are a lot harder to replace than battery cables!
Randall
56 TR3 TS13571L once and future daily driver
71 Stag LE1473L waiting engine rebuild
71-72-73 Stag LE2013LBW waiting OD gearbox rebuild

Offline
OK so I was once working on my starter solenoid up on the fire wall near the battery. The outer case of my brand new watch my wife just gave me for Christmas must have touched the pos. terminal on the battery and at the same time shorted against the metal battery hold down. Huge sparks wherein I proceeded to melt a giant chunk into the side of my new watch! HOLLY S__T! My wife is going to positively kill me.

I actually hid it from her and called the manufacturer with a sob story. The customer service rep was very kind suggesting I should box it up and mail it back as defective. Sure enough, they sent me a brand new one! Wow! Disaster narrowly averted. And, you now better believe I have terminal covers on the battery just like these: https://www.remybattery.com/Snap-On-Terminal-Protectors-P547.aspx

Offline
Oh no! That is a bad day.

I don't suppose you have a spare starter for the spare?

Offline
Whew. Glad just an icepack is involved Geo. You have convinced me that I'm keeping the battery cutoff I have on my 3A!
Randy
59 TR3A - running
70 TR6 - running
64 TR4 - now with the next custodian

Offline
Bummer. Heel quick I'm not sure if that bag of ice should be allowed for your 100 degree drive.
Richard
65 tr4a
OP

Offline
Follow-up: The hand is fine, all I got was a small blister on my index finger -- I've had worse blisters from using a screwdriver aggressively.

The big rear post had broken through the insulator that protects it from the starter body -- replaced that and all is well.
T

Offline
Was the nylon? insulator that passes through the alloy end plate? or the next one which is some sort of plasticized woven material that broke? Having just rebuilt one I was concerned about the second one.
Tom Lains
TS 8651 & 58107
R

Offline
I know the feeling well! Very same thing happened to me when we attempted the first start after the body was back on. I cinched down on the nut a little to much too. The results was the crushed fiber insulator (photo) and the grounded post. There were plenty of observers on hand, so fortunately, the fellow tasked with activating the solenoid switch recognized the problem quick enough so that the contact didn't weld itself closed. Even with it shorted for a few seconds, the cable got hot enough to melt the shrink wrap on the lugs and a bit of the insulation. In addition to a new cable, I followed their unanimous advise to take this as an opportunity to upgrade to a gear reduction starter to replace the original. The new setup works great. 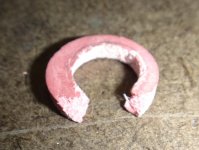 Offline
Sounds like something I would do. Glad all is well. Still having fun?

Offline
Bummer George. Glad the damage to your hand was light and the fix was easy. Just anothrr day in the shop eh.
Dick
Dick LeClair
Mid Tennessee
1960 TR 3A

If you can't fix it with a hammer, you've got an electrical problem!

Offline
As the olde saying goes:

TRTEL said:
Was the nylon? insulator that passes through the alloy end plate? or the next one which is some sort of plasticized woven material that broke?...
Click to expand...

The nylon tube was fine (don't think much can happen to it) it was the washer pictured by Rick.

In retrospect, there is probably no need for that first nut to be more than snug - though it then helps to have a wrench on it when you tighten the nut that holds the cable.

Offline
Yep, first nut, its job is to provide stop for the cable and help hold it tight. Doesn't need any pressure on or against the starter. I learned the hard way years ago. I twisted one off.

Offline
Where are the faulty grounds when you need them? Glad the injuries were minor on both sides!
John

Offline
George,
Glad you are OK and the damage was fairly light.
I have a battery cutoff switch to add to my TR3 which is still positive ground. Do I add the cutoff switch (the one with the green knob) to the ground side?
Thanks to all,
Jim Farris
56 TR3 - Salvador Blue
73 TR6 - Pimento
13 Mini Cooper S Bayswater Edition - Blue
OP

Offline
Yes, I think it is best to cut-off the ground side. I have one that has been on the shelf -- maybe it will get called into use now.
Similar threads