Menu
Log in
Register
Install the app
You are using an out of date browser. It may not display this or other websites correctly.
You should upgrade or use an alternative browser.

Offline
A buddy and I just purchased a 1949 Austin Sheerline A125. We found it local in Louisiana and for quite a good price. She appears to be very structurally sound (surprisingly no rust). We are planning to do more of a restomod with the mechanicals but make the exterior stock appearing.

She was delivered this past weekend and we spent two days cleaning all the "stuff" out. I purchased a shop manual for it. My experience has been with Corvettes and I am almost finished (will never stop) with my 86 Corvette.

I am sure I will have a lot of questions so please bear with me. I will need to find a bunch of parts and will be selling some I am sure. I do plan on rebuilding the engine as a side project.

How about some pics.

Online
Hey, Gantner - Where yat? And welcome to the party!

Looks like you're gonna have a ball with that. 'Fraid you won't have time to finish it for the show at Delgado, but maybe next year...

Offline
Show at Delgado? Didn't know about that. When? I live about 5 minutes from their main campus by City Park.

I can't seem to find out a lot about the Sheerline. I need things such as lenses. I hear that they share common components with others, just not sure which ones. My neighbor is a wonderful wood worker (and he owns a lumber yard) so hopefully I can get him to help with the interior trim. Seats we have not decided yet.

The plan is to swap in an LS engine and trans with a ford 8.8 rear out of an explorer (1/2 inch difference in width). Not sure about the front yet (fab in tubular upper and lower A arms and coilovers). I think updated front and rear brakes and suspension are important. I am sure some will find this as a sacrelige.

Our goal is a dependable cruiser. I grew up on carbs and drum brakes. Once I made the switch to EFI there was no going back.

Offline
We will go check it out - not in the Austin, yet.
This is going to take a while. The Vette took two and a half years of weekend and nights in my backyard. Even painted the pearl white in a portable garage back there. Thank goodness for understanding neighbors.

You going to be here for the show? Let me know.

Offline
Sorry to hear that. We will go check it out. Always love to see nice cars.

Cgantner5150 said:
The plan is to swap in an LS engine and trans with a ford 8.8 rear out of an explorer (1/2 inch difference in width). Not sure about the front yet (fab in tubular upper and lower A arms and coilovers). I think updated front and rear brakes and suspension are important. I am sure some will find this as a sacrelige.
Click to expand...

Looks like 7851 ever made - so, probably what's left worldwide is in the dozens. That said, sound like a cool project, though you might want to consider re-powering with an XJ6 Jag engine - partly to keep it british but mostly because I suspect it will be a much much easier fit. Keep us posted!
John-Peter Smit
1976 MG Midget
1969 Vauxhall Viva GT
1958 Fiat Multipla (Barn art)
C

Offline
I measured out the LS engine (I am a Chevy Guy) and it should fit without issue. I have thought about fabbing bolt in motor mounts just to keep the options open in the future, BUT I realize that a proper resotration is way over my budget.

Don't tell anybody but my first thought was a BMW straight 6 (I have an X5 and it is a nice engine). My buddy (Ford guy) nixed that idea right away. I just want trouble free and availability of parts. Not a racer by any means (that's what the Vette is for). The LS is an incredible platform.

Like I stated earlier - I can't wait to get into the Austin 6. I also can't wait to see the machinist's face when I bring the pieces to him. Of course I am sure I will laugh/cry when he gives me the estimate.....

Offline
I believe this engine is basically a six cylinder version of the four used in the Austin Healey 100 (actually vice versa, the lopped off two cylinders to make the four) anyway, you probably won't have too much luck finding Austin Sheerline parts, but Healey 100 parts are available from several sources, including the mass market british car supplies such as Moss Motors and Victoria British. The 100 motor is 2.66 liter 4, I am pretty sure the Sheerline is a 4 liter 6, same bore and stroke, I think the same pistons, etc.
C

Offline
Thanks, glemon. I did read that somewhere today while surfing around and it's good to hear that from another source. On the eBay UK site someone actually sells oversized pistons and rings for the 6 as well as full gasket sets and bearings. I also found a set of tail lights and a grill.
Let the monetary bleeding begin....
C

Offline
Little update - finally got the rear brake drums off so the beauty would roll. Put on some tires and she now resides in the back yard in the portable garage (paint booth for the Vette).
Took a bit but finally got the trunk open - had to drill the lock out. We could not locate a key for it, but the ignition key is there thankfully.
Found quite a few parts on the UK eb*y site. Nothing on this side of the pond though.

Next comes the tear down. We are thinking of pulling the body off the frame. Should help with the frame mods for the rearend transplant.

Offline
The magazine Practical Classics has a feature in the current issue on the home restoration of an Austin Sheerline. On the shelves at Barnes and Noble right now.
My Blog
My Facebook Page

Offline
Guys, the D series BMC motor was a reliable long lasting beast. It was used in only one sporting car, the Jensen 541.

Offline
I'll go grab that magazine today - thanks for the heads up.

i have all intentions of rebuilding the engine but no plans on putting it back in the Sheerline. I think it would look great in the living room when it is done.

We located and grabbed a rear end this past weekend (8.8 limited slip disk brake setup out of a 97 Ford Explorer). My new TIG should be here by Friday (I always wanted one).

We even put in a bit of time last night (Monday) and removed some of the front body work and radiator.

Offline
assuming this is the car - why did you leave the Citroens? 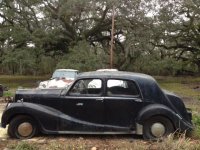 Offline
Those were not for sale. He had three cars and an ambulance. Those are some strange looking cars.

Cgantner5150 said:
Those were not for sale. He had three cars and an ambulance. Those are some strange looking cars.
Click to expand...

JPSmit said:
why did you leave the Citroens?

JP, He was smart to buy the one he did even if the French jobs were for sale! Ever hear what it cost to rebuild the oil over air suspension in a Citroen? Very complicated and very expensive. PJ
[SIGPIC][/SIGPIC]
Remember, Never Forget
We Live In The Land of The Free
Because of The Brave

How good it feels, the hand of an old friend! Longfellow

PAUL161 said:
JP, He was smart to buy the one he did even if the French jobs were for sale! Ever hear what it cost to rebuild the oil over air suspension in a Citroen? Very complicated and very expensive. PJ
Click to expand...