Offline
There are five spade connectors on the back of my wiper switch. Two on top, two in the middle and one on the bottom. Can anyone say where the red/light green wire gets connected? It would have to go on the bottom I'd think.

I found this pic on the net, and the wiring is much different than mine was, but I'm not sure mine was correct, since I bought the car only last year and never drove it--instead, I tore it down.

My two wires from the top are shown here attached to the middle prongs. Black and brown/green. The red/light green goes on the bottom, I guess. I could try that set up. Any great ideas or thoughts? Will I fry my harness if I copy this set up? 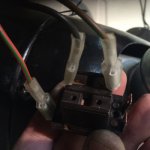 Offline
I think the information I have says both the photo and your description are wrong. I can't swear this is all correct, bunch of stuff chained together; but I think it is.

This should be the diagram for the 2 speed wiper switch. It was published for the heater switch used on non-AC Stag; which has a different Stanpart number but cross-references to the same Lucas 34317 as the TR4A two speed wiper switch. (The speed markings are backwards to the TR4A wiper, too.) If you look closely at the photo you supplied (I had to save it and blow it up), you can see the terminal numbers cast into the plastic body.

I believe pin 1 (or pin 7) should get the black wire. Pin 4 should get N/LG (high speed, first position). And pin 8 gets R/LG (slow speed, second position).

The screwy thing about this motor is that both wires have to be grounded for slow speed. Unfortunately, if you ground only the slow speed wire, it can damage the motor. There is a resistance wire inside that can overheat.

Offline
Thanks Randall. I'm trying to figure it all out still. I checked the wiring on my other car. It could be way off, but pin 7 is the R/LG, pin 8 is the N/G, and pin 4 is the ground/black. Can it truly be? I think it works that way in my other car, but I do know that speed 1 is so weak I have to use speed 2, and even that is slow, slow, slow.

Offline
Your wiper motor is a model DR3A, right? There are other two speed wiper motors and they are wired differently. For example, TR4 with the two speed option had a model 5BSA, and TR6 uses a 14W.

Your wiring would make position 1 ground R/LG, which is wrong according to the documentation I have. NG (only) should be grounded for high speed. I guess it might run (haven't tried it myself) with only R/LG grounded, but I think would be very weak if it runs at all.

With only R/LG grounded, the current for the armature has to flow through the resistor when the park switch is open (which is the configuration I said before could cause the resistor to overheat, because it's only designed to carry field current which is much less than armature current). 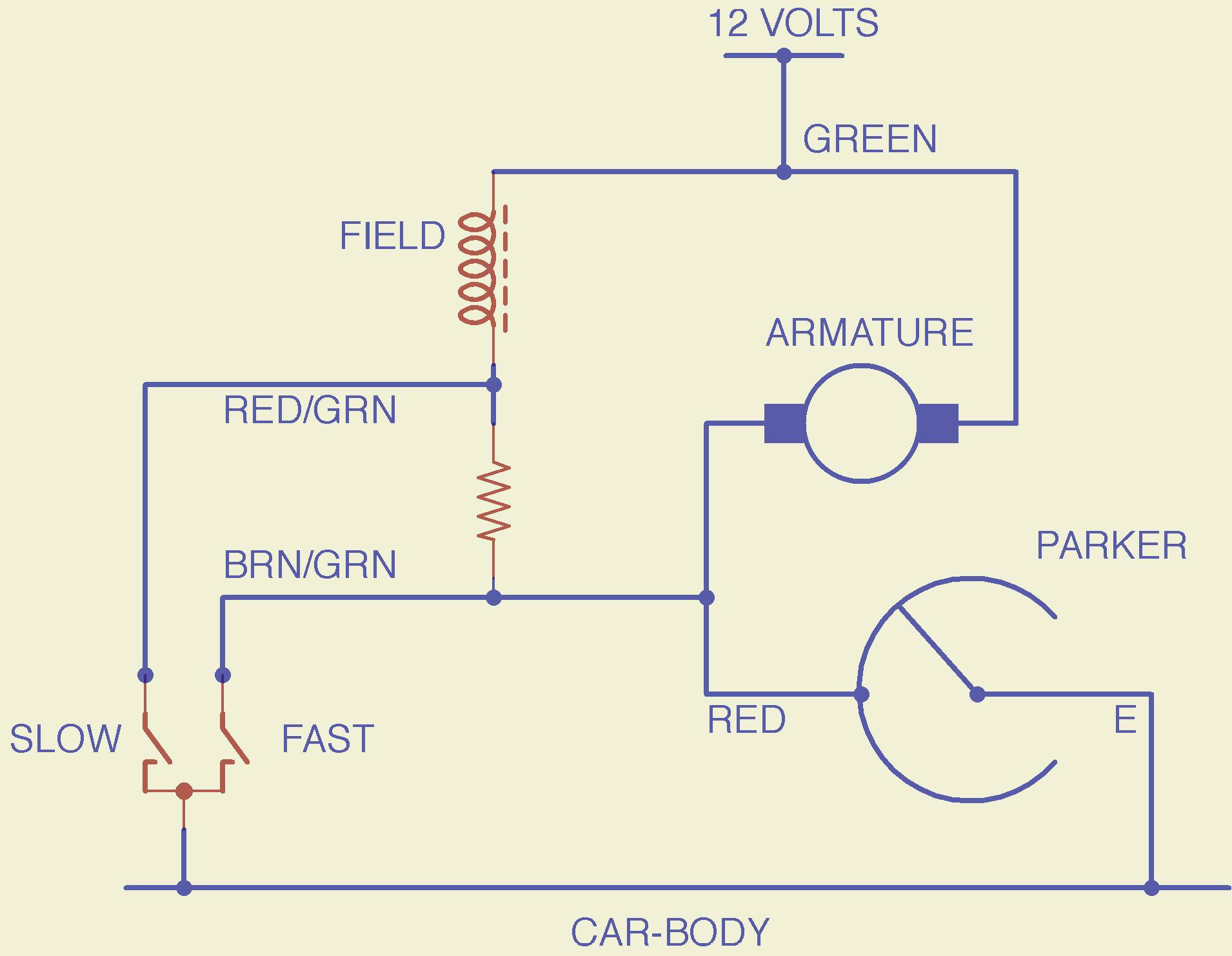 Try it my way, I think you'll be pleasantly surprised.

PS, I failed to record the author of the document where I found the above drawing. If anyone recognizes it, please let me know and I'll try to offer proper credit in the future.
Randall
56 TR3 TS13571L once and future daily driver
71 Stag LE1473L waiting engine rebuild
71-72-73 Stag LE2013LBW waiting OD gearbox rebuild
OP

Offline
I will take it apart and try again, but I think it failed when I did that. Here's a pic of what I finally wired up, and it worked, though lethargically. Maybe my motor is bad. Will either 1 or 7 work for a ground doing it your way? 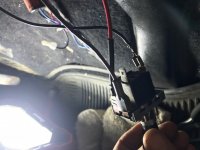 Offline
I will take it apart and try again, but I think it failed when I did that. Here's a pic of what I finally wired up, and it worked, though lethargically. Maybe my motor is bad. Will either 1 or 7 work for a ground doing it your way?

Offline
I did it again, and what you said worked. Should've known Randall. I used pin 7 for the ground, and I think that made the difference. I have two speeds. Low is very slow. High is slow. But it was '66 I suppose.

Offline
Could be other causes. In my case, the rack was very stiff in the tubes. The blades would barely move with the glass dry.
Apparently the tubes had gotten crimped just a bit, in several different places. Probably would have been smarter to just replace them, but I managed to open them up by forcing bearing balls through.
Result is still slow by modern standards, but I don't think they were ever very fast.

Somewhere I've got a spec for how easily the rack should move with the blades lifted from the glass, but I don't have it handy (I'm in Hof's Hut at the moment, trying to escape the heat)
Randall
56 TR3 TS13571L once and future daily driver
71 Stag LE1473L waiting engine rebuild
71-72-73 Stag LE2013LBW waiting OD gearbox rebuild 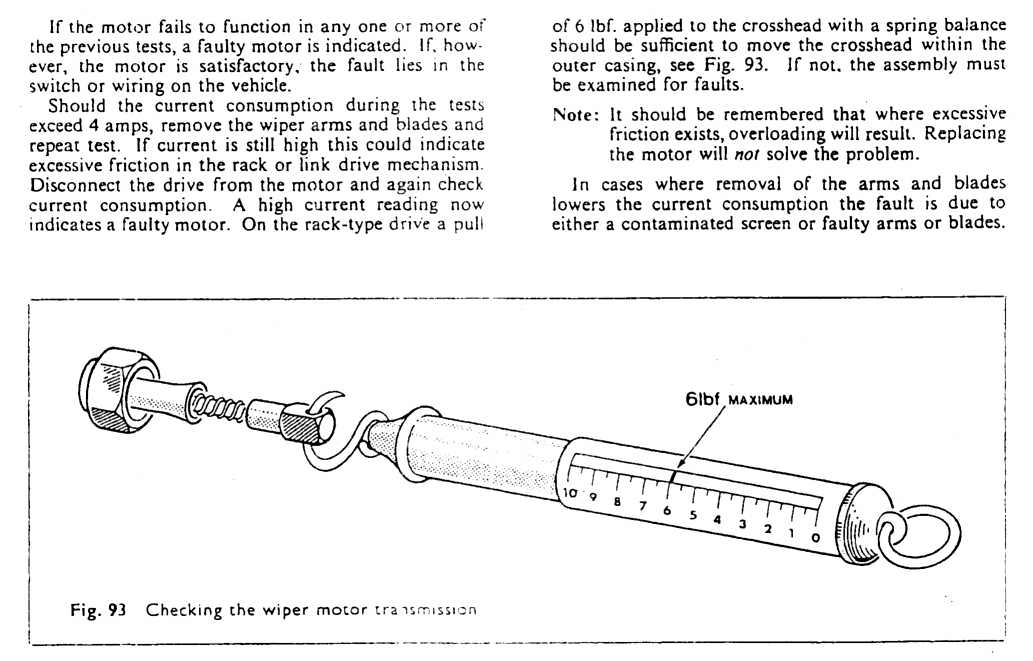 Offline
If speeds are slow, clean and remove the old grease in the motor gearbox as well as the cable tubes and lightly replace with new grease. A little bit goes a long way and your speeds will be like a new car. Been there done that. Wipers work great now.
T

TR3driver said:
PS, I failed to record the author of the document where I found the above drawing. If anyone recognizes it, please let me know and I'll try to offer proper credit in the future.
Click to expand...

Randall, I think it is from an article here on BCF, I know I found it extremely useful when wiring a TR4a, and then a TR250. There is also some confusion related to the switches as that switch has been used for different seemingly unrelated things. But, I think on the TR250, we took a TR6 headlamp rocker switch, removed the plastic rocker/top part of the switch, and placed into a removed top from bottom of a wiper switch, since the 'guts'/electrical part of one was correct, while the printing on the other was correct and new (TR250 rocker) ones are not available.

Anyway, here's the article where I think your drawing came from. It was well written and very helpful. It was a great marketing idea to make a 2 speed motor -slow and slower.

Offline
Thanks! That does indeed appear to be the same article; although what I have is a PDF document. Just for the record, here is the link to the BCF article
https://www.britishcarforum.com/bcf/content.php?156-Lucas-DR3A-Two-Speed-Wiper-motors
Randall
56 TR3 TS13571L once and future daily driver
71 Stag LE1473L waiting engine rebuild
71-72-73 Stag LE2013LBW waiting OD gearbox rebuild
Similar threads