What We Can Look Forward To

Online
This happened at an assisted living center. Folks who lived there had small apartments, but ate in a common area. One morning, one of the residents didn't show up for breakfast, so another resident went upstairs and knocked on his door to see if everything was OK. She could hear him through the door, and he said he was running late and would be down soon, so she went back to the dining room.

An hour later, he still hadn't arrived, so she went back up toward his room but found him on the stairs. He was coming down the stairs, but was having a hard time. He had a death grip on the hand rail and seemed to have trouble getting his legs to work right. She told him she was going to call an ambulance, but he told her no, he wasn't in any pain - just wanted to get his breakfast. So she helped him down the stairs, and he had his breakfast. When he tried to return to his room, he was unable to get up even the first stair step, so they called the ambulance.

A couple hours later she called the hospital to check on him. The receptionist said he was fine; he just had both his legs in one side of his boxer shorts.

A family brings their frail, elderly mother to a nursing home, hoping she will be well cared for. The next morning, the nurses bathe her, feed her a tasty breakfast and set her in a chair at a window overlooking a lovely flower garden.

She seems like she’s doing fine, but after a while she slowly starts to lean over sideways in her chair. Two attentive nurses immediately rush up to catch her and straighten her up.

Again she seems fine, but after a while she starts to tilt to the other side. The nurses rush back and once more bring her back upright. This goes on all morning. Later the family arrives to see how their mother is adjusting to her new home. “So Ma, how is it here? Are they treating you all right?” they ask.

“It’s pretty nice,” she replies. “Except they won’t let you fart.”

Online
This should fit right in here..... 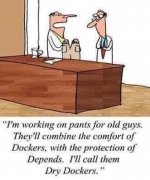