What starter is this?

I'm hoping someone can identify this starter. It was on my 1960 BT7 when I bought it in 1887 and I've used it exclusively on every Healey motor (including race motors) I've had since then. I don't have a way of knowing for sure but I'd guess at least 150k miles and it has never let me down. Probably the best starter motor I've had on anything I've owned.

I've always known it looked different on the outside but, since it worked flawlessly, I never opened it up before. It still works perfectly but since I am doing a total rebuild of every system and I could feel the bushings are getting a little loose, I decided to open it up and do a rebuild.

I was very surprised at what I found. The commutator is not like any I have ever seen - the brush springs press the bushes parallel to the armature shaft rather than 90* to the axis of the armature like normal. You can see in the pictures that the brushes are totally different shapes and not like Healey brushes. The commutator end shaft of the armature is smaller in diameter than a normal Healey starter so it would use a different bushing. At the other end of the armature there is no nut holding the bendix on like a Healey but rather a snap ring in a special collar (obviously I need to figure a way to compress the bendix spring enough to get the snap ring out....).

Clearly standard Healey bushes and brushes won't work so I need to identify this thing so I can try to get parts for it. 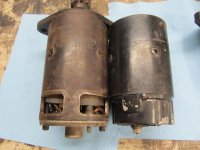 2nd pic - the markings I noted above 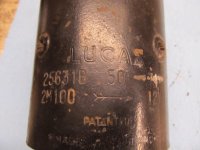 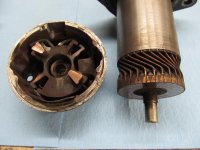 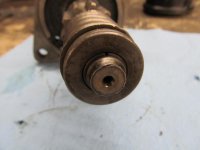 Any help will be appreciated.

Online
Can't help with the ID, but that really is a unique brush/commutator arrangement. Maybe why it's lasted so long?
OP

So, now the brushes have been found. I hadn't thought of searching ebay for these part numbers but I'm guessing you did.

Tomorrow I will see if they can tell me the application or supply the bushes - I just went to their ebay store and searched for the 2M100 and it came back with 2 sets of brushes... the one you linked to, and one slightly different that says Triumph Lotus MG etc. so I hope you are right and they can help with the application so I can find the bushes.

So, now the brushes have been found. I hadn't thought of searching ebay for these part numbers but I'm guessing you did.

I did a Google search for LUCAS 25631B, which I assumed was the model #. The eBay listing was the first item to come up.