Spitfire What hoses go where...

Offline
I am just a paycheck away from putting a battery in my 1980 Spitfire (Federal). I've installed a Weber DGV carburetor. I got the radiator bracket back from the fabricators, and it's a perfect fit. (By the way, if anybody needs those radiator brackets, I have the plans for them.) I've put on the Hayden fan, and I should be able to wire that up without a hitch (thanks to everybody who helped me with that). But I still have a few things I can't figure out. 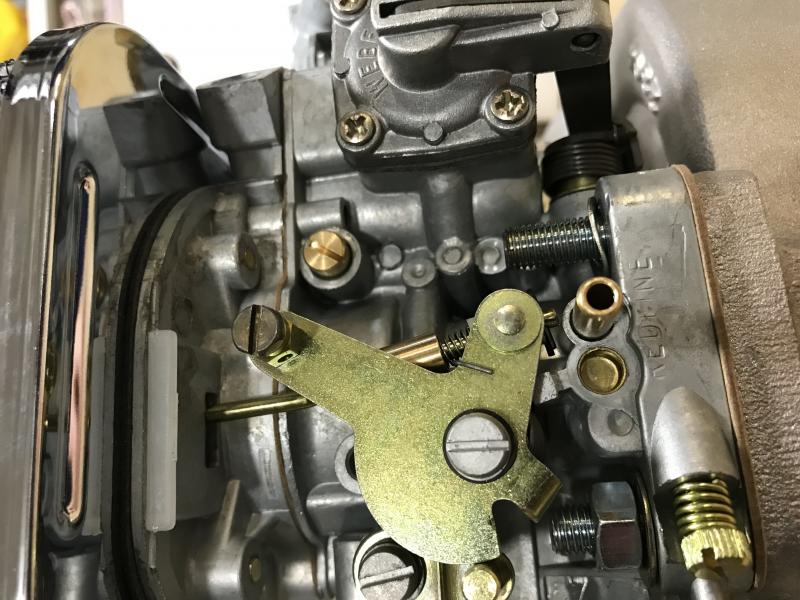 OK... I still can't figure out how to keep this program from rotating my pictures, but I can work around that. That's the carburetor. See the tube just to the right of the choke? The folks at Redline told me that was the vacuum advance, but since I don't have a vacuum pump (yeah... try finding one of those), they said I could just plug that up with a small rubber "cork." Is that correct? Or is there something better I can do here? Moving on... 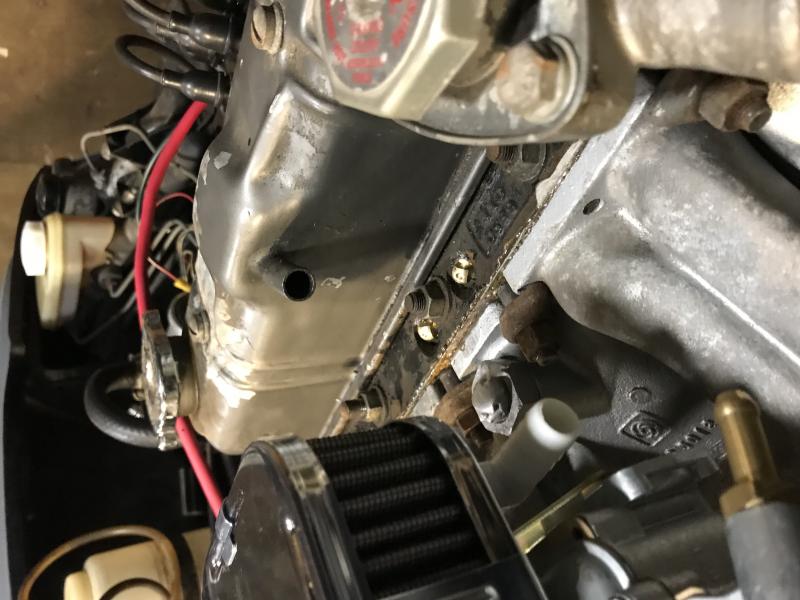 See that tube coming out of the rocker cover? I think that originally went to the carbon cannisters, but I won't have those, either. Regardless, should there be a hose on that, and if so, where does it go?

And, finally (this time without pictures), there is a gas return tube on the carburetor. I asked the tech folks at Redline about that, too, and they said that I could just plug that, so I used the plug they provided. However... (there always seems to be a "however") ... there is a vent hose going from the gas tank to a carbon cannister (which I have), located in the back with the gas tank. Then there is a line going from that cannister heading to the front of the car. Only it doesn't get there. It stops about half way, leaving the end of that line open. I think that it originally went to the front where it hooked up with the carbon cannisters there. Like I said, there are no carbon cannisters up front anymore, and there's not going to be. So do I need to do something with that hose? Could it be the gas return? Do I need to plug it? Or does it need to be left open as is?

That's all I have for today, but that's enough. Thanks already for your help!

Offline
Vacuum advance has nothing to do with a vacuum pump. (What vacuum pump? Do you mean the smog pump?) IIRC you have an earlier distributor (not the 1980 version). If it has provision for vacuum advance, then I would hook it up. Doesn't do much for performance, but saves some fuel under normal driving conditions (cruising). If not, then a simple cap over the port will do (any FLAPS will sell you a vacuum cap in a suitable size).

Might be worth checking first that the port is really setup for vacuum advance, though. That pipe looks kind of big, vacuum advance ports are usually smaller. If it is an advance port, it will lead to a small opening in the carb throat, just slightly above where the throttle plate sits at idle. Or another way to check is to put your finger over the port with the engine idling. If you can feel a strong vacuum at idle, it is not a vacuum advance port.

The port on the side of the rocker cover is the crankcase vent. It needs to be open to the atmosphere, and oily air is going to come out. Ideally, it would go to a catch can or similar; but I have been known to just hang a length of hose on it and let the hose hang down near the road; so the engine compartment doesn't get painted with oil mist.

The thing in the back is probably not a carbon canister, but rather a vapor separator (to keep liquid fuel from being forced forward to the carbon canister). That line is effectively the fuel tank vent. It will breathe fuel vapor under some circumstances, suck air in other circumstances. With no canister up front, might as well leave it open under the car.
Randall
56 TR3 TS13571L once and future daily driver
71 Stag LE1473L waiting engine rebuild
71-72-73 Stag LE2013LBW waiting OD gearbox rebuild

Offline
This is often the way the valve cover is vented on those downdraft Webers. 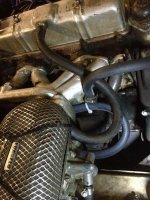 Offline
I'm supposing I mean the smog pump. Just showing my ignorance there... but I'm learning! I'll check out my distributor, but I don't think it does. I'll probably end up capping it. Good to know it's nothing that the car won't run without. I like the idea of hanging a hose off the crankcase vent. All told, you answered my questions. Thanks!

Offline
If your engine is typical in it's accumulation of crankcase pressure, it's going to need a little help in the form of SUCTION on that valve cover hose in order to relieve the pressure...If you begin to see oil coming from seals around the crankshaft and joints on the engine, such as where the head meets the block following a spirited drive, you'll see why I say that.
Ken @
kencorsaw "at" aol.com
DRIVE 'EM IF YOU GOT 'EM
OP

Offline
You're exactly right! I found the thingy on the distributor where the hose goes, and then connected it to the carburetor. Smooth as Marvel Mystery Oil.
Similar threads