Offline
A friend gave me a Weber balancer, so I decided to adapt it to my HD8 setup.

Will use it in combination with a manometer I've ordered and will report back. 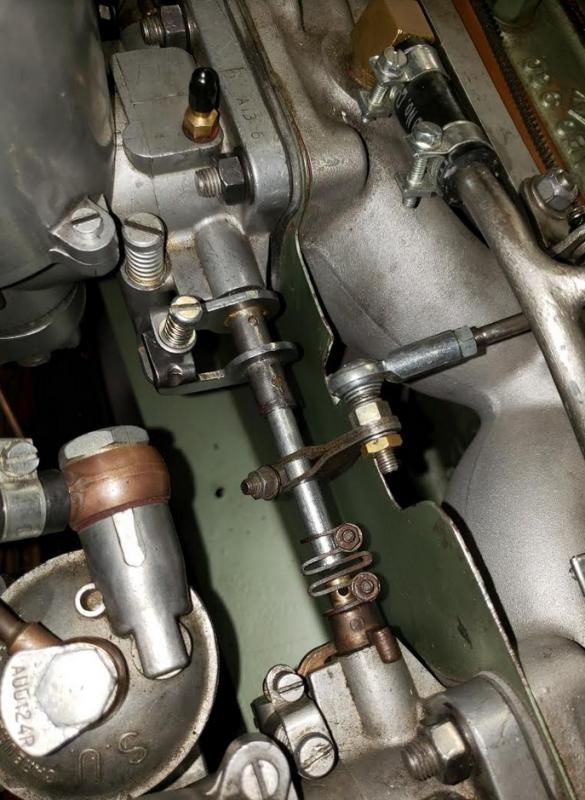 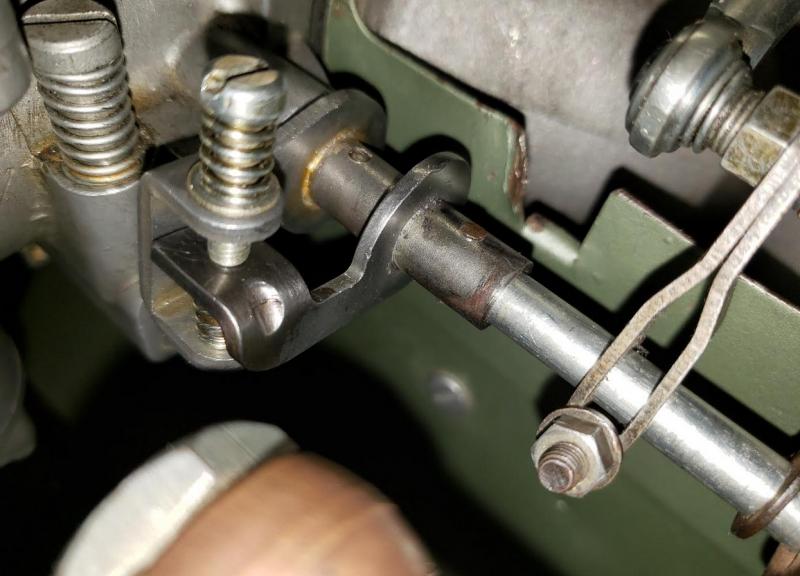 So, what does it do that wouldn't be covered by the Slow Run Adjustment, Fast Idle Adjustment, or Throttle Shaft Stop lever along with the interlink adjustment with the Throttle Shaft Lever with Slot for securing the balance of both HD8s? These adjustments seem to be enough so what else would the Weber Balancer do that can't be done with all else?

Offline
Ray,
I've been trying, with my Air/Fuel and Exh Gas Temp gauges, to super-tune - to take tuning to the next level over stock tuning.

The Weber balancer, in combination with the vacuum ports* and a manometer/synchronizer, makes it easy to sync the carbs anytime without removing the air cleaners and at various speeds, not just idle.

Besides dual Webers, this setup is now very similar to that found on two-cylinder, twin-carb motorcycles, snow machines, personal watercraft, etc. The original 240Z used a similar balancer between its SU carbs.

*vacuum port (brass) visible at top of upper picture above.

This inexpensive sync kit with adjustable gauges seems to work well. I'd like a mercury manometer, but they don't seem to be available on Amazon.

With my previous glass-bottle water manometer, when one carb is badly out of sync, it tends to ingest water. This was also a complaint with the over-the-counter water manometers. 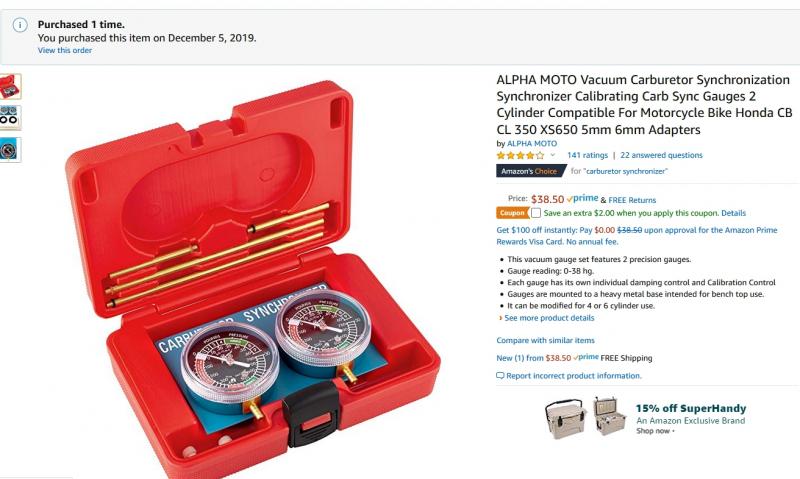 I understand your points...the Weber adjuster makes it easier synchronize and balance dual HD8 SU to effect better performance and efficiency. However, the HD8s were designed with a slow run adjuster to set idle with the throttle butterfly closed. Additionally, the throttle interconnection is provided with Fork & Pin connectors to each carburetor throttle shaft. This interconnect allows the carburetors to be set for idle with closed throttle plates and adjusted for run balancing (as you mentioned) by adjusting the Pin within the Fork to set when the throttle shaft/plate starts to move. As such, each throttle shaft can start moving at a slightly different time and, therefore, balance multi-carburetor performance.

As I understand your objective, you are balancing the carburetors for balanced performance with the Weber adjuster setting a compensating difference in throttle plate movement initiation. As I perceive, the difference set would be static and present at idle as well as through the higher operation range, one throttle plate would be at least slightly open during idle. 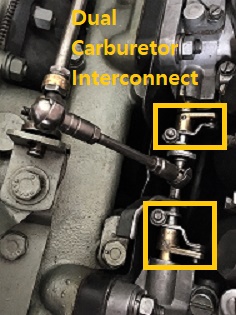 What you are doing could be very beneficial and the Weber adjuster is much easier then the Fork & Pin arrangement of the BJ8 center throttle link adjustment. However, the Fork & Pin does allow for both BJ8s to have the throttle plates closed when at idle and a difference in throttle plates positioning would be present once the throttle is on the move. The negative for properly adjusting the Fork & Pin is that, due to their locations, it is almost impossible to adjust properly and no one I know takes full advantage of their adjustment or even recognized the objective you presented.

I'm wondering if the Weber adjuster could be placed within the throttle interlock area so to adjust the Folk & Pins and allow for more exacting BJ8 throttle balancing. This arrangement would satisfy the HD8 closed throttle plate idle requirement while also allowing for a more accurate throttle actuation difference between carburetors. Yes, it would mean cutting and securing the Weber adjuster within the interlink but would seem to satisfy all operational requirements to achieve your performance objective.

steveg said:
.... I'd like a mercury manometer, but they don't seem to be available on Amazon.
Click to expand...

You're not going to find a mercury thermometer because of the mercury. Much more difficult to find now.

I would recommend a Dwyer Instruments Magnehelic differential pressure gauge. https://www.dwyer-inst.com/Product/Pressure/DifferentialPressure/Gages/Series2000. They can be ordered with the zero in the center of the dial (or adjusted so the zero is in the center). Then you can go driving with the gauge without spilling.

I've used many of them for measuring air flow for work. I have one that I used with a pitot tube to measure engine fan air flow.
John, BN4
OP

Offline
John,
Thank you for the info. Will check it out.

Ray,
Tom Bryant told me he thinks (guesses) the fork/pin arrangement replaced the "W-clamp" because it was cheaper and stronger.

Also, HS6 carbs use the fork/pin and they don't use the slow-run screw.

However, I'm inclined to agree it looks like a method of allowing for both idle sync and running sync at the same time. I'll adjust it for running and see what it does to the idle.
Steve Gerow
Altadena, CA, USA
1959 AH BN6 2-seat roadster / 1974 TR6 Emerald Green
Check out my galleries:
http://www.pbase.com/stevegerow

Was able to easily balance the carbs at 2000+ rpms using the sync gauges and Weber balancer.

This didn't seem to have any particular effect on the idle, which was set, after syncing, at 750 rpm using the slow-run screws only.

Very happy with the idle performance of the Delrin bushings in combination with the vacuum ports and sync gauges. IMO similar results could likely be had with the stock balance bar setup and fast-idle screws, though not as easily.

PS - a friend just had his HD6 carbs rebuilt by Tom Bryant, including the Delrin bushings. He's experiencing the same superior idling results with the slow-run screws only. NFI - just proselytizing for what I consider to be a superior product taking our carbs to the next level.
Steve Gerow
Altadena, CA, USA
1959 AH BN6 2-seat roadster / 1974 TR6 Emerald Green
Check out my galleries:
http://www.pbase.com/stevegerow

That is very good to hear. What is the difference between the carburetor throttle shafts at 2000 RPMs? I assume you initially set the carburetors with the throttle plates closed and shafts aligned. Is my understanding correct that the Weber synchronizer is physically attached to both throttle shafts and adjusts to create a difference between the two. Can the Weber adjust past the initial alignment point in both directions?

I really like your Weber adjuster and am trying to see how to create one (or something like it).

Last, what kind of a performance improvement did you notice?

The setup - except for the vacuum ports - does no permanent change to the car - so you could relatively easily change it back to stock.

Edit: I've threaded the lower half of the vacuum port holes to accept SU cheese head screws, which can be installed in place of the brass ports for a stock look.

I didn't use the fast idle screws at all, but merely held the throttle open by hand while adjusting the weber screw. The point is you can't do it all with the weber adjuster. You have to get it in the ballpark first, then do the final adjustment with the weber. 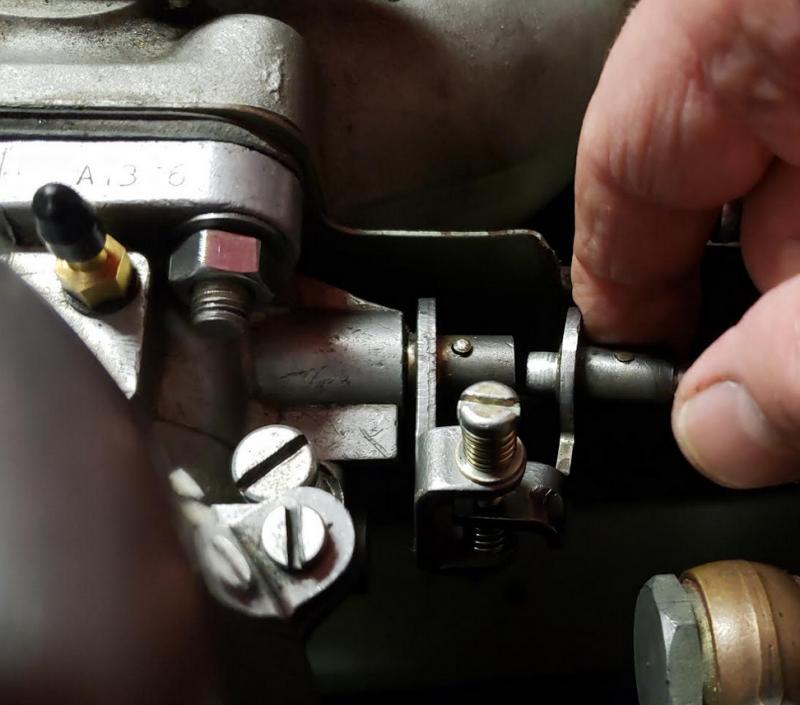 Use of the HD6 "W" connector allows easy shaft removal without removing either carb. 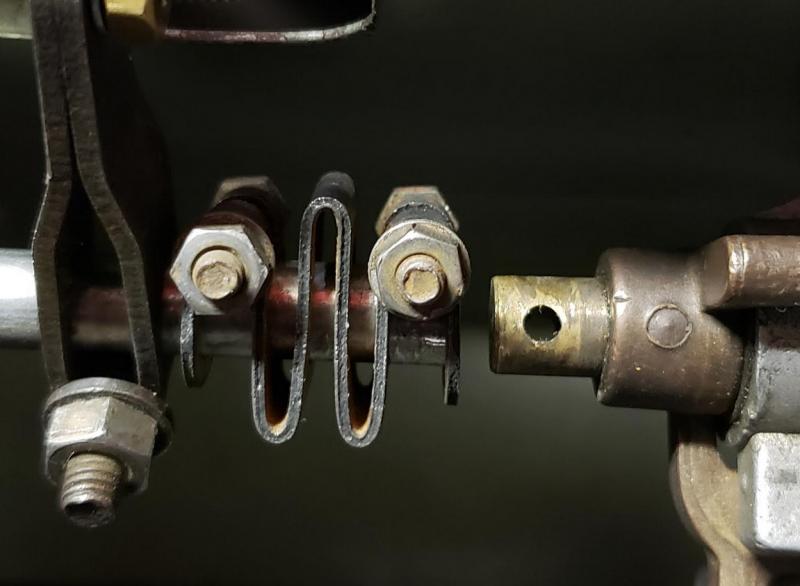 I used these bushings (Amazon). They have an accurate ID which allows movement with little slop.

Weber balancer parts available on eBay. Some reshaping of the periphery required. I also cut down the male tang. Used vinegar to dissolve off the yellow zinc chromate. In future will replate with clear blue zinc. I used a step drill to drill out the oblong weber holes to fit the bushing OD. Silver brazed the weber adjusters to bushings. 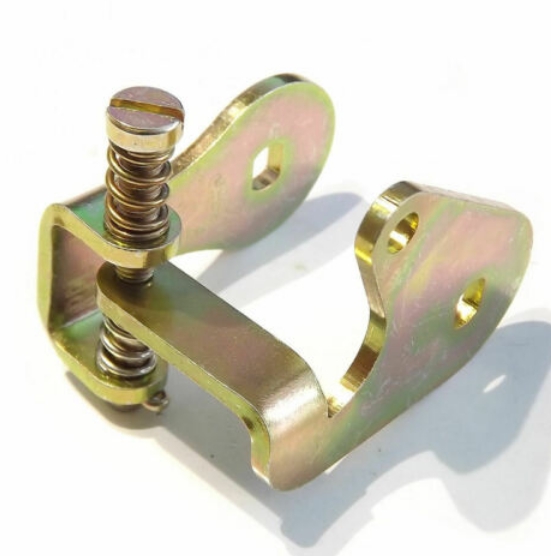 5 mm vacuum ports. I plugged them with 4-40 Allen screws under the rubber caps.
EDIT: For stock BJ8 setup suggest drill & tap the insulator blocks rather than the carbs.

The more I think about Delrin bushings, the more I like them. I am now convinced that the soft Teflon Bushing/Seal does deform when under multi-carburetor shaft misalignments along with the age. As a result, outside air is allowed to penetrate down the shaft and past the Teflon bushing. This outside air penetration is not constant and changes with temperature and movement of the bushing on the shaft.

Since the Bushing is held in place by 2 circle springs placed before and aft, the bushing is not physically pinned to a precise position and over time shaft pressure on the soft bushing will cause it to deform. As a result, the amount of outside air leaking past the bushing will vary and may, initially allow a higher air volume past and then shift between the circle spring retainers to better seal. This change in shaft air leakage flow would lower the RPMs and, depending on the seal's dynamic settling, could lower the RPMs to the point of requiring driver intervention in an attempt to maintain engine operation.

New Teflon seals, retained tightly between the circle springs, will perform very well to seal off outside air but will fail due to the fact that even the best try at aligning throttle shafts will be prone to having some shaft-to-shaft misalignment and applied uneven pressure on the bushing. As mentioned prior, this pressure would, especially over time, cause deformation of the small Teflon bushing/seal and increase the potential of shaft air leakage but not at a constant rate.

The Teflon bushings are not bad and do seal well but they are small and soft with less contact to the shaft and can deform with the least amount of shaft pressure. Over time the Teflon seal can loose its resilience and its ability to reform its shape and reapply itself to the shaft.

The Delrin bushings take up all the body space allocated to the shaft. The much greater contact surface, its non-deforming hardness, accurate machining, and solid positioning with a very low resistance coefficient, in my opinion, make it a far superior bushing choice for the HD8 or other SU carburetor.

Offline
Ray,
A friend, Peter, recently had Tom Bryant bush his HD6 carbs. Tom's comments re the fit of the stock teflon bushing:

The measurements Tom provided are roughly the same measurements he derived from my Teflon/Delrin installatons. Since their seems to be quite a bit of space for the unsecured Teflon wrapped seal to move within the shaft enclosure and confines of the circle springs, seal movement would allow outside air to penetrate at times and be sealed out at others. This is reflected by having a high rpm at the beginning of an extended idle period and having to intervene to maintain engine operation as time late in the period.

As I see it, the Teflon bushing/seal would be effective if it were positionally secured and large enough to totally fill the void between shaft and enclosure. Since it is soft and pliable, it could take the pressures of (multi-carburetor) shaft interconnect misalignments and reform as well as seal against air without shaft drag.