Offline
This little piece of ford history is the actual ford cortina that belonged to the managing director of the ford manufacturing plant in Dagenham London. He kept a log book to record not only the service history but every time she was refilled with fuel. Still running smoothly 2016. She's for sale for £5,000. 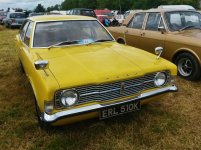 Offline
Ford Cortina MKIII - I had a '72 in the same color,
except it was a 2 door.
I got to do a few parade laps around Laguna Seca
with it - what a blast! I thought I was going to scrape the
door handles off of it,as the suspension was so soft.
"Across from the bar there's pile of beer cans,
been there 27 years....."
OP

Offline
Wow Laguna Seca
....what was that like??
- Paul
https://www.greasemonkeydirect.com/

Offline
It was an absolute blast! I thought that they'd kick me out
for sliding the car around,& squealing the tires.
Sometimes it's more fun to drive a slow car fast,rather than
a fast car fast.It also works for the '67 MGB GT.
"Across from the bar there's pile of beer cans,
been there 27 years....."
O

Offline
I drove down to Richmond (Richmond in Sydney that is) and spotted this in the car park on my way to the supermarket. A rather early one judging from the indicators. 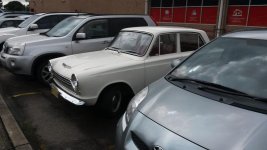 Offline
Where did you find TWO 1600E's in the US?
They were never officially imported here.
"Across from the bar there's pile of beer cans,
been there 27 years....."

Offline
If we're talking about past cars of our own, when I was in Scotland in the mid 1970s I was driving a 1962 Cortina (4 door with the 1200cc engine). It was held together with body filler and almost used as much oil as a two-stroke, but it got me around. I recall on one occasion I was driving on a motorway (I might have been going from Dundee to Stirling, but as it was over 40 years ago I'm not too sure) and decided to put my foot down and see what it could do. It started shaking violently when the speedometer approached 80, so I eased off. Later I checked and found the car had a maximum speed of 76 mph.

Here it is parked in the High Street in Edzell: 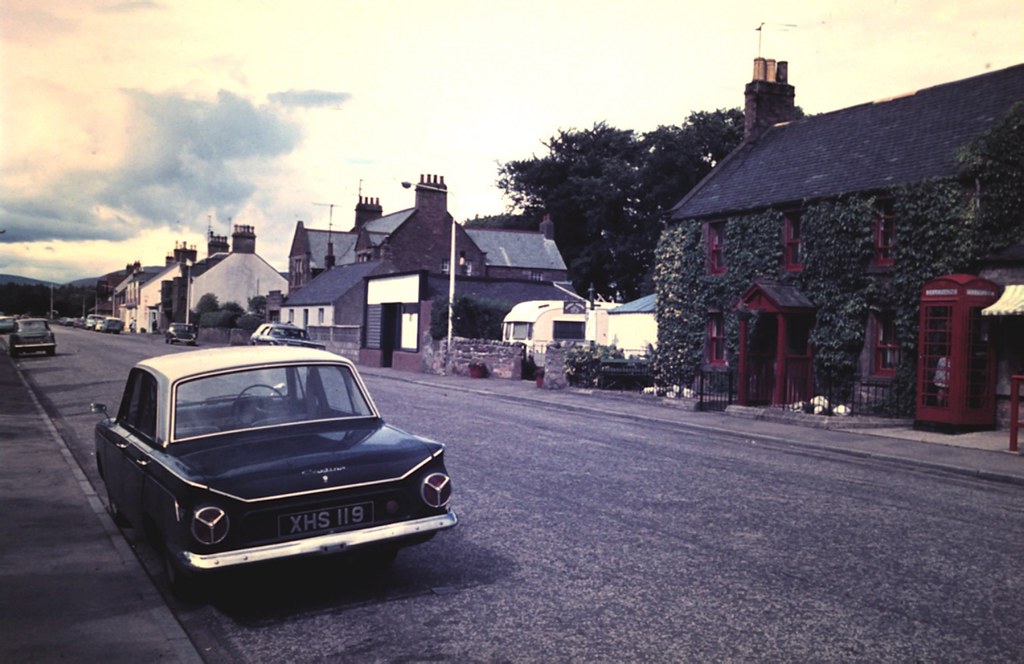 LarryK said:
In St. louis area. My father-in-law bought the green one from someone local. I told him he had better find a parts car. He found the red one in Cahokia, Il. I got the green one running, then he wanted the weber down draught 2 bbl. put on the green. Fought me hard, but got it tuned. He then fidgeted with the carb and I woukd not fix it and wound up buying both. The local Ford dealer told him they were out of Canada and they had brought them down for a couple different people in 68. So we had them from approx. 79-81. The green one is in Freeburg, Il area sitting by a garage.
Click to expand...

Is it still there?I know people who would save it.
You can PM me about it.
"Across from the bar there's pile of beer cans,
been there 27 years....."
O

Offline
It would be interesting to know how many Cortinas ended up in the US. Can't be very many.

Offline
There WERE a lot of them.They were sold by Ford dealers here.
I've had more than my share,along with Corsairs,Consul Capris,& an Anglia 105E.
"Across from the bar there's pile of beer cans,
been there 27 years....."
S

Offline
I always like the MkII and remember seeing these on the road as a kid. I know the Mark Is are supposed to be "the" Cortina to have, but they don't appeal to me like the IIs. They are on my "British Cars to buy when I win the Powerball" list.
1969 Austin Healey Sprite Mark IV - "Baby Blue" or "B.B."
1953 Plymouth Cranbrook - "Gertrude"
Similar threads