Offline
OK, I may have gone over to the dark side, but I left a clear path between worlds. When I had my TR6, I hated the seats on long drives. They probably just needed to be rebuilt. A friend gave me a pair of Gen 1 Miata seats. They looked pretty bad, but I threw a set of Wet Okole seat covers on and drove the car. I did purchase the brackets for the install that matched up to the “standard” holes in the floorboard (not sure if there is such a thing). The brackets were like solving a Jenga puzzle. My son has that car and recently replaced the seat covers with some matching the interior. Fast forward. Another friend gave me a set of Gen 2 Miata seats. I decided to try the seats in my TR3. They were snug but fit. I decided to build my own brackets. I mocked up the hole placements with a corrugated plastic realtor’s sign. I knew from dealing with Miata seats before that the four bolt-in points are higher than the bottom of the seat pan, so you have to elevate them. The passenger and driver mounting locations are slightly different. I used 3” wide X 1/8” thick metal and 1” square metal tubing from Lowes in the construction. I was going to weld capture nuts inside the square tubing, then I discovered “elevator bolts” and used those. I hadn’t welded in over 50 years and suddenly wished I hadn’t joked with my son about the need to be either a good welder or a good grinder. I borrowed a friend’s lightweight TIG unit and bought enough extra metal to practice. I was happy with the results, all the holes line up and I can swap seats from original to Miata or back in about 45 minutes. I found matching vinyl at Moss Motors, but couldn’t get them to sell me pieces large enough to do the job. When I purchased the car, I got a scrap of vinyl, matching the rolled area around the top of the cockpit and the face of the dash, large enough to make a bimini top. I sourced five yards of that vinyl for the seats from Spradling International (their plant is only 10 miles from my home). I used Mr. Mikes, > MrMikes Miata Upholstery Kits < to stitch up the new seat covers. He stopped making covers for the late Gen 2 seats (1999-2001) that I had, so I traded for some early NA cloth seats. Mr. Mike’s detailed instructions made this a doable DIY job. The quality of his work was impressive. I can’t say that the seats really fit the look of the car, but for any long trips, I know they will be more comfortable and safer.

A few things to watch.
Miata sites (and fans) will say that NA and NB seats are the same. Basically, they are. There are two different early style seat bottoms. In 99, they changed the seat back between Gen 1 and 2. The inner seat belt on early seats is on the tunnel. On the later seats it is on the seat rail and had to be ground (cut) off to fit the seats in a TR3. My seat belts were already added to the car and are bolted to the floor near the back of the cockpit.

Elevator bolts are welded on the bottom of the plate. 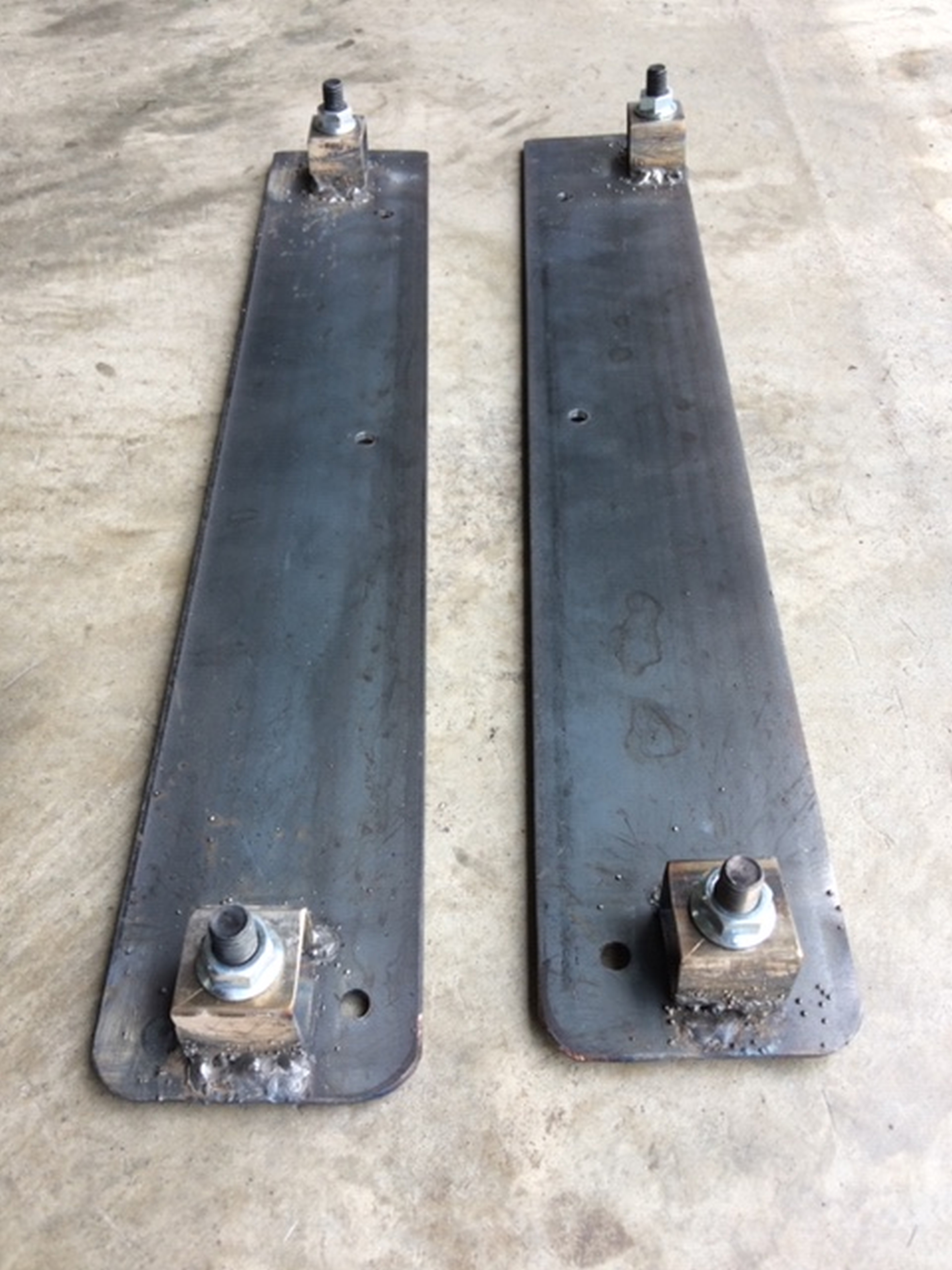 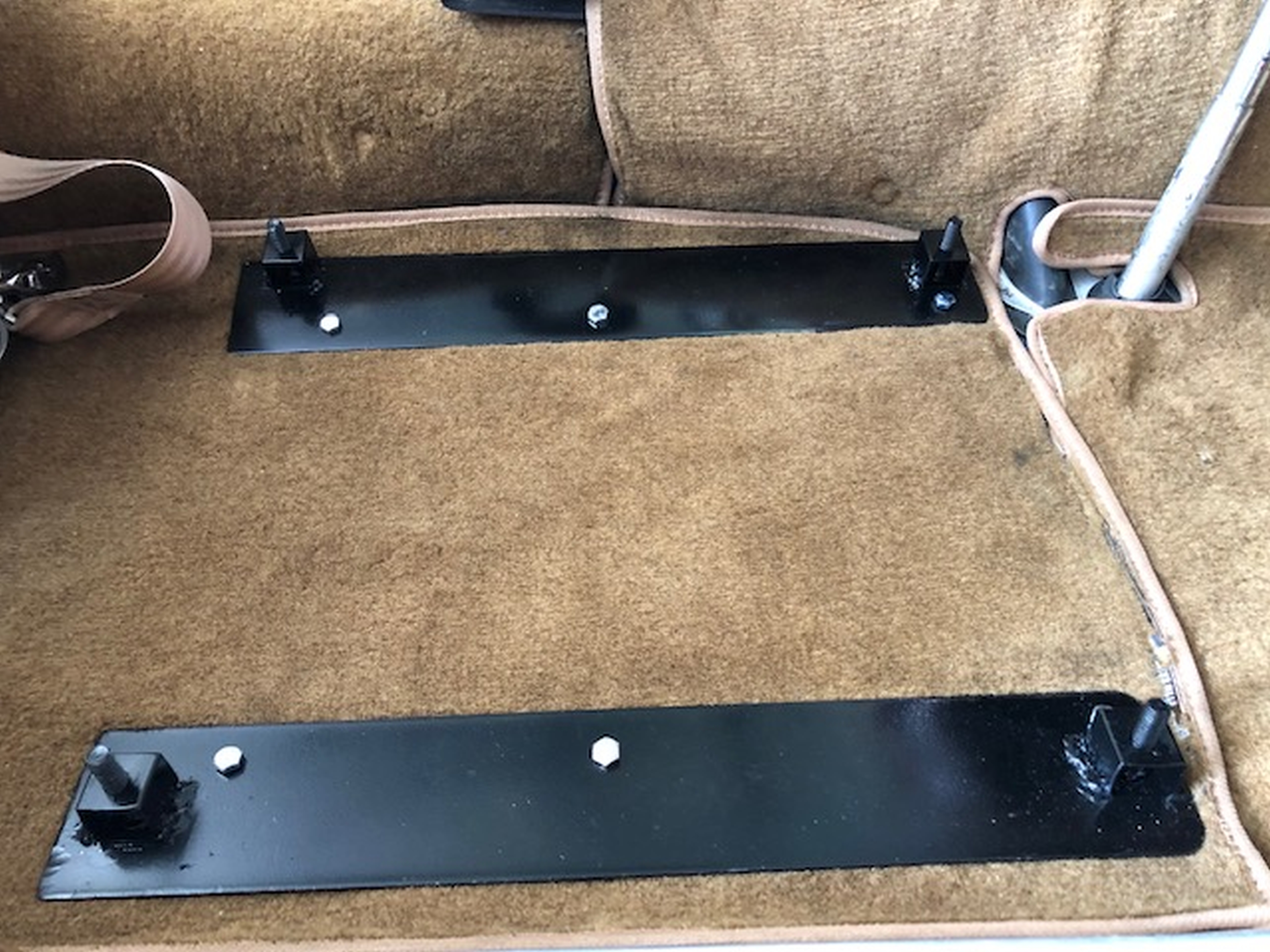 Yeah, they are taller. Sitting height is the same. You can remove foam and lower as desired. 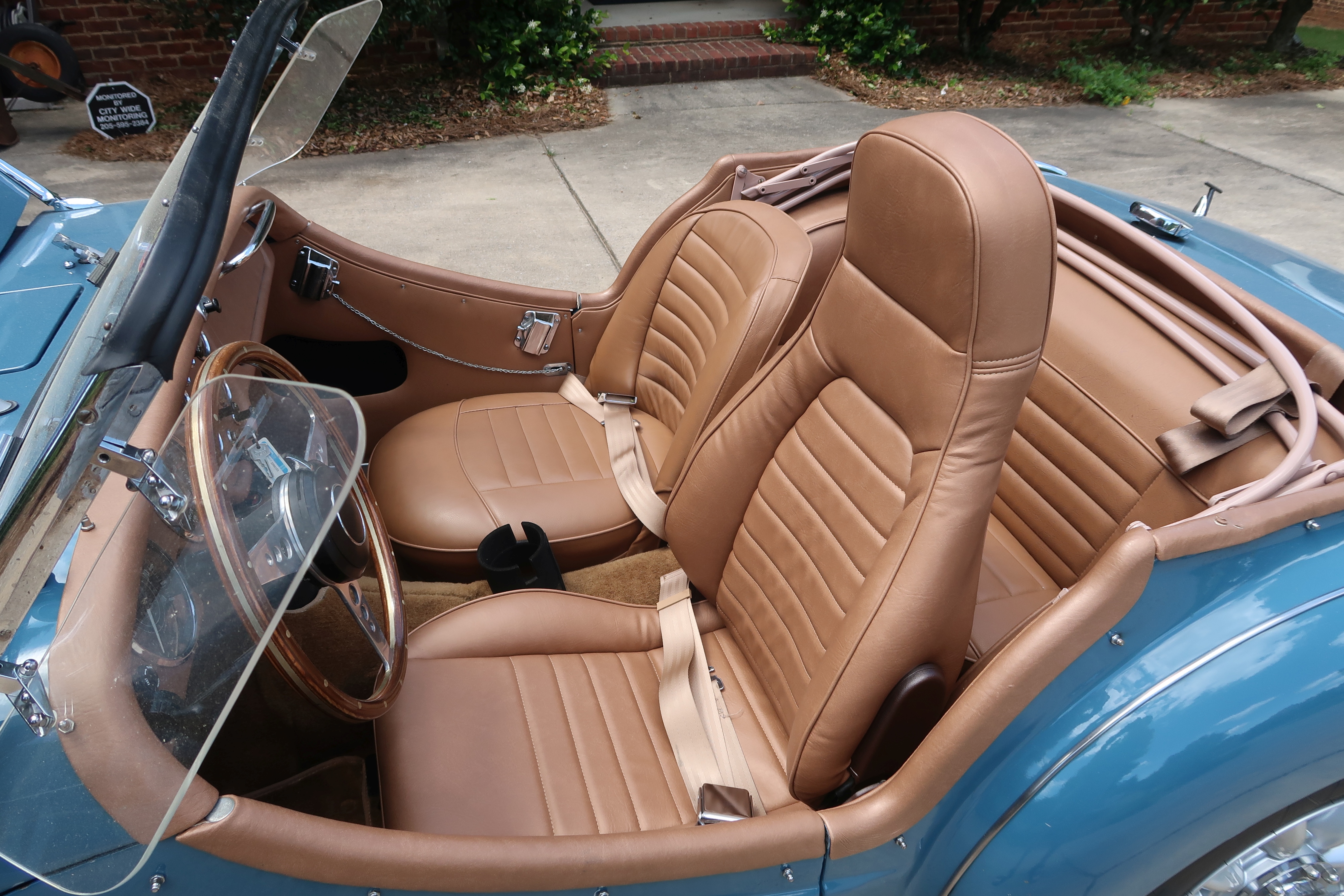 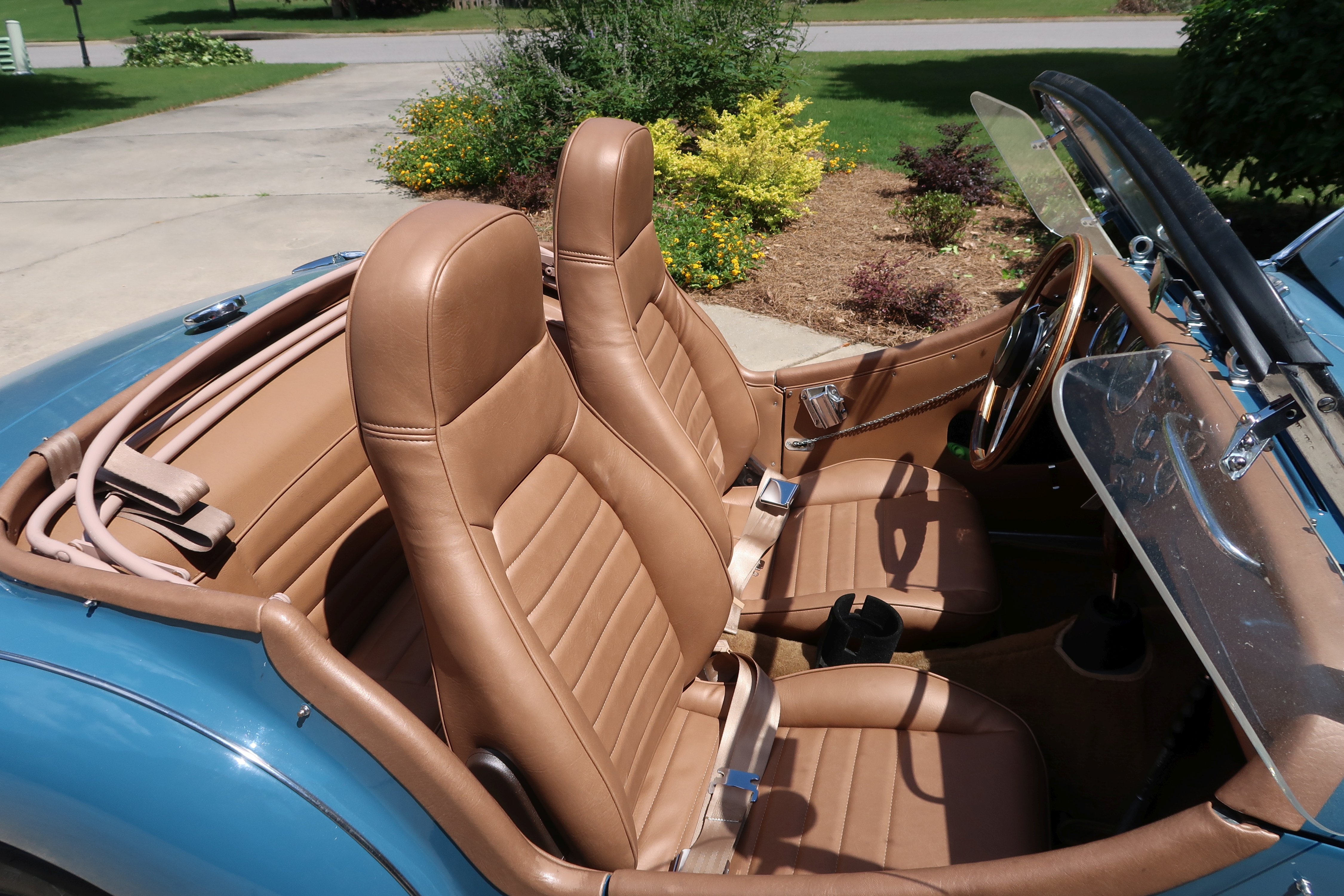 Last shot. I guess when I use my Brooklands screens, I'll be cleaning bugs off the headrest! 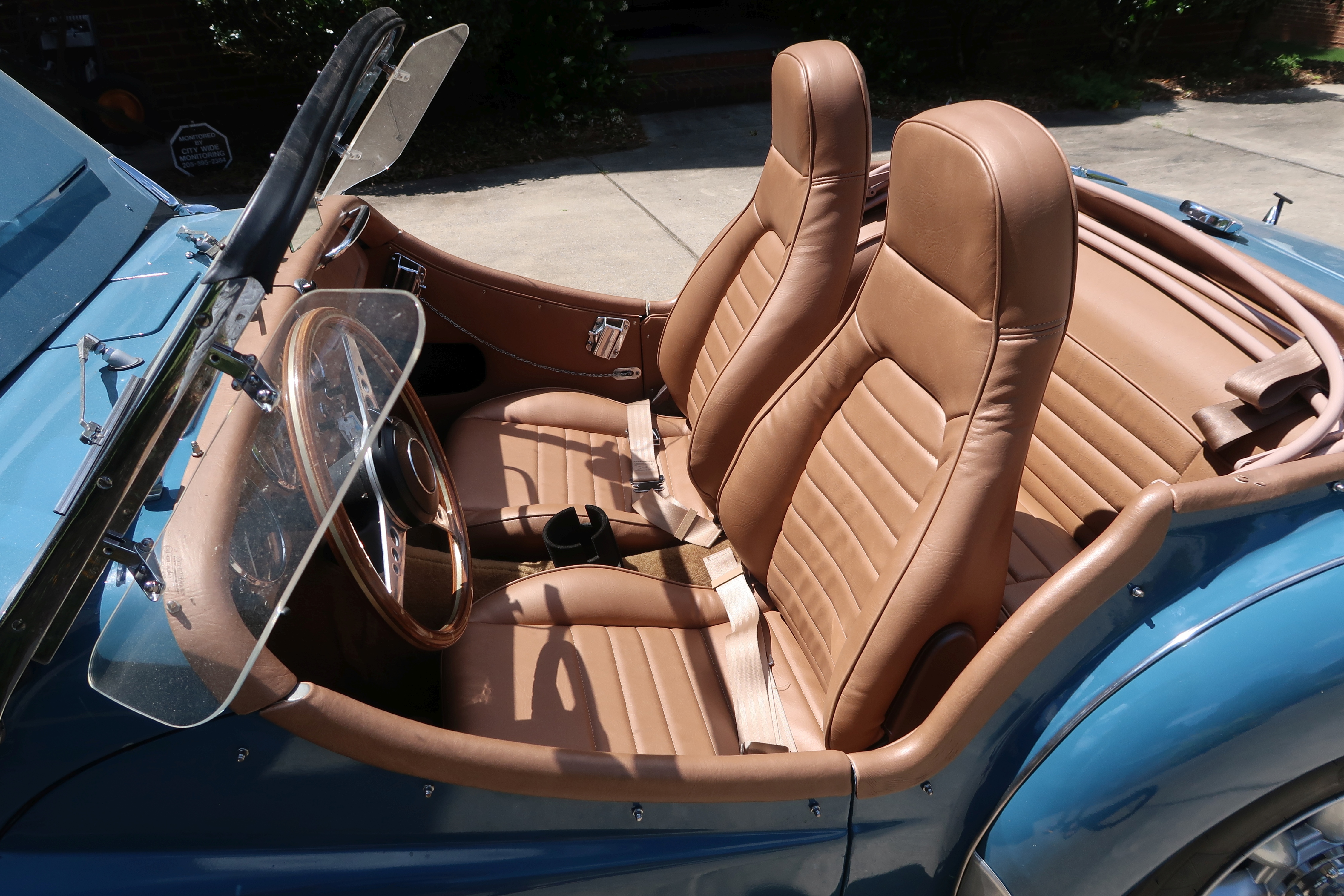 Offline
I for one like this (bad necks need help) Nicely done, it is IMHO a safety upgrade. As such does NOT detract
from the car even in a "concourse " setting. Getting hit from behind aint fun.
Make sure you have may favorite 4 brake lamp conversion.( Inner lamps with 2 filament housings from the
front lamps and a jumper wire over to the brake lites) LED's light up faster/brighter too.
MD(mad dog)
OP