Offline
Its a 1974 TR6. The car idles fine and cruises smooth but hesitates under acceleration. I just noticed that the vacuum retard line from my distributor is not attached to anything. Could my acceleration hesitation be a vacuum issue?

Offline
Thank you arcom
Yeah, the 74 plumbing was a little complex. The nipple on the bottom of the front carb did supply vacuum to the distributor retard module, but on a 74, it was also the source of vacuum that activated the Throttle Bypass Valves...All that was done in the manifold that was attached to a fitting in the radiator top hose that housed the Thermostatic Vacuum Switch.
I could go on, but realize that if you do plug the nipple you will disable the TBV, which may not be such a bad thing.
But the real reason I responded was to ask what is the nylon tube attached to the rear carb doing ?
Is it going to the EGR valve ?
Ken @
kencorsaw "at" aol.com
DRIVE 'EM IF YOU GOT 'EM
OP 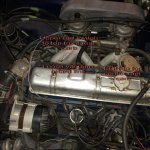 Offline
Thanks poolboy. Picture 54.php shows it all. I'm missing a fair bit on my car so I think I will take the "...anything that sucks air when engine is running must be capped/plugged ..." option for now.
I see part BA74. My EGR is connected only to the top (centre) of the rear carb. Do I need to add a connection to the lower rear carb (BA74?) to have the EGR operating properly?
I also see now that I don't have any fuel traps. What are your thoughts/experience on that?

Here's something else you might want to try..
Disable the Anti Run-on Valve (ARV) and remove the associated plumbing.
BUT start like this:
You'll have a 'banjo fitting' like the one in the middle of this picture.

Remove the hose attached to the smaller nipple and put a good tight fitting cap on just the nipple.
Drive around for a few days and if you do not experience "run-on" or dieseling when you shut down, you can continue on with the clean up.
Remove the hose that was connected to the banjo fitting and the ARV situated under the Carbon Canister (CC).
Remove the U-shaped hose connecting the ARV to the CC.
As far as the hose from the CC to the ARV nipples on the carbs, it's up to you if you want to completely remove all the hoses, or replace the hoses with redirected hoses or leave them as is. The one thing you do not want to do is cap those nipples.
Here is the nipple(s) I'm talking about.
I colored it red for the picture:

There's more you can eliminate, but for now that's enough typing for me.
Ken @
kencorsaw "at" aol.com
DRIVE 'EM IF YOU GOT 'EM

Offline
Never seen Ken say that much
Don
"Stick a Wedge in it!"
Mount Pleasant,SC