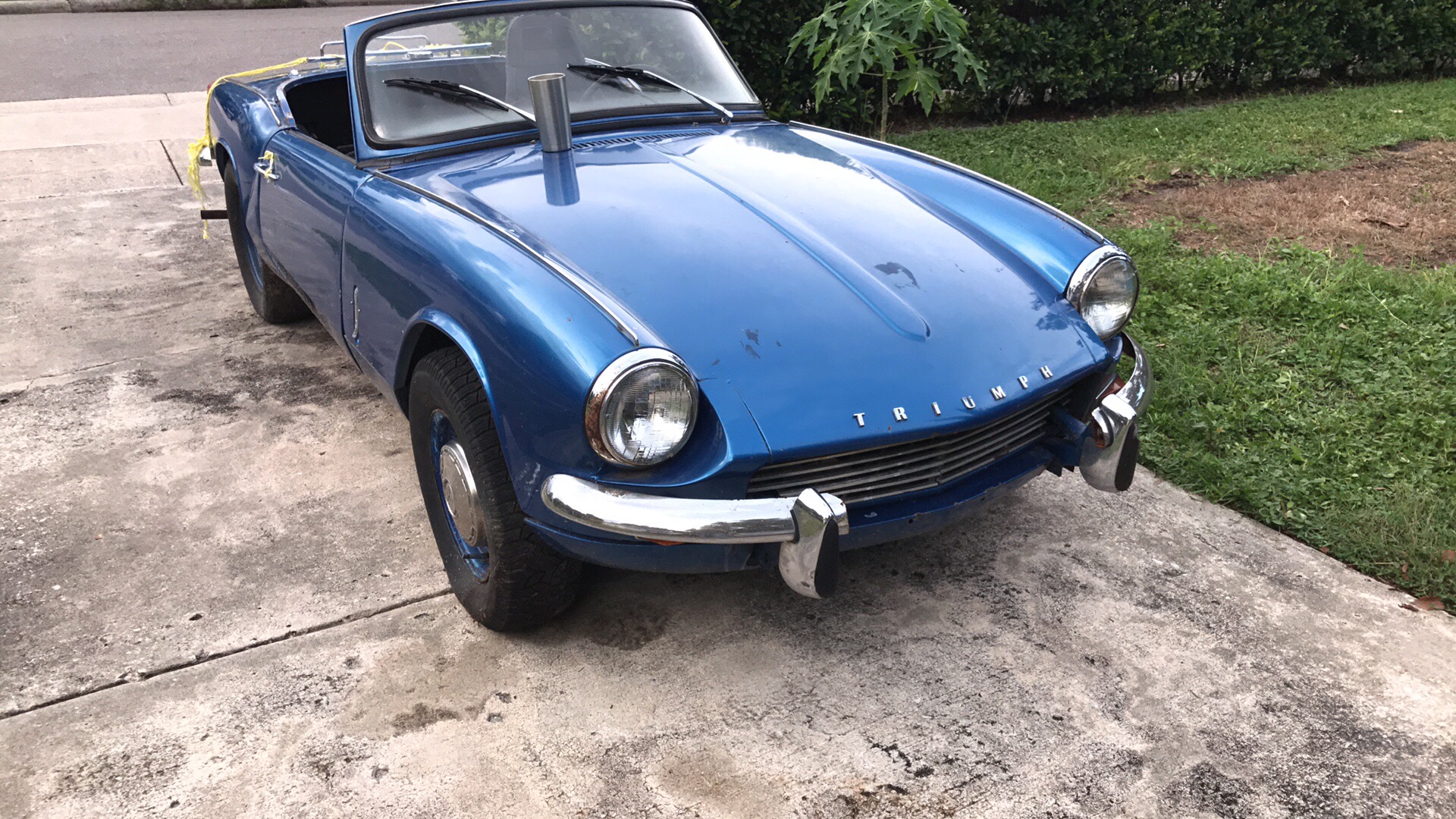 I purchased this car in August of 2017 from a fellow in Winter Park Florida for $1500. He was asking $2000 and it had a hard top. Well the hard top was for a square tail and not a round tail so I had him knock $500 off the price and keep the top. I was sort of familiar with Spitfires and some of the things that could plague them such as bad floors and sills. 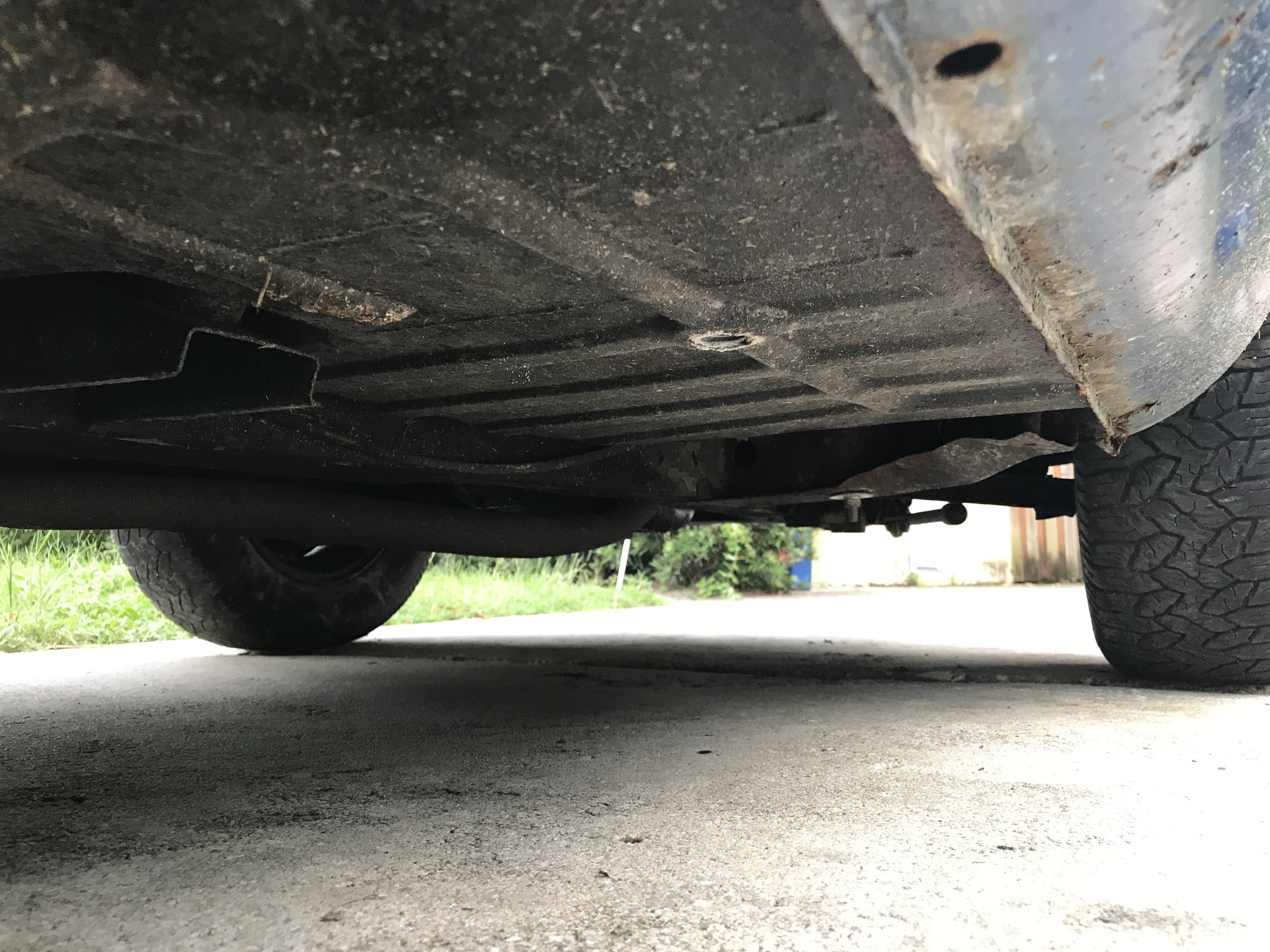 I had the car towed home, and I decided that I would get started trying to get the car purring again. With the aid of a bunch of ether I was able to get it to run.

The car was rough, there is no question about it. I did eventually get it running to the point where I could drive it. That was scary, but I did make the obligatory lap around the neighborhood and parked it in the garage.

In the years since I got it I have driven it all of about 5 miles. After parking it initially I started going through the brakes because they were horrible. I found out that somewhere in its life the front brakes were upgraded to GT6 calipers. That was a fun discovery when I went to fit new Spitfire caliper and they didn't fit. Thankfully Moss was supportive and replaced them for me.

​
After that I went through the carb, and tried to rebuild it which turned out to be an epic failure. The car has done nothing but run rich since then, but it does run well. Well, until the electrical issues started happening... 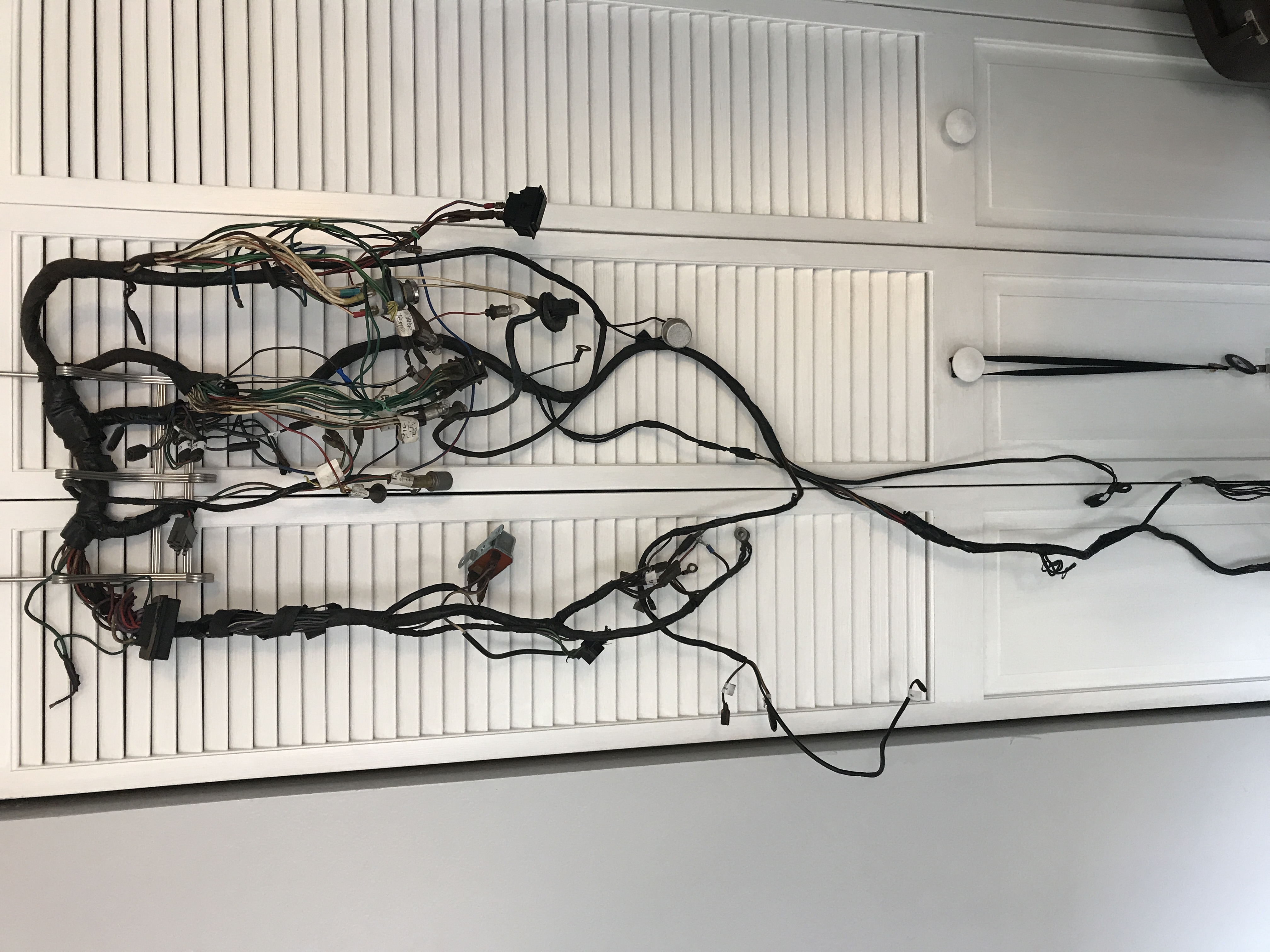 ​
Then our dear friend Lucas hit me with some lessons... I had noticed that none of the rear lights worked, so naturally I started to look for the culprit. There was a fuse that had blow and overheated in the fusebox causing some of the plastic to melt. I crawled up under the dash only to discover an absolute mess of attempted repairs. So I started to inspect the rest of the harness, and it was just a sheer disaster. So I had the brilliant idea to pull the whole front harness out of the car and repair it. This was a fun job, and rather satisfying. When I got the harness back in, and I replaced some lamp housings on the back things started to work again! Until they didn't... Turns out that there was a main power wire leading from the Voltage Regulator to the Ignition Switch that had a break in it, and it stopped working. I swore I got all the breaks fixed but I must have missed one... This was very deflating for me, so I stopped work on the car for a while. A long while... So long in fact that we got pregnant and had a baby.

A few months roll by, and Covid had taken its grip on the world and I needed something to keep me going positive. So I decided that I wanted to do a full frame off restoration after discovering some serious rot on the heelboard. 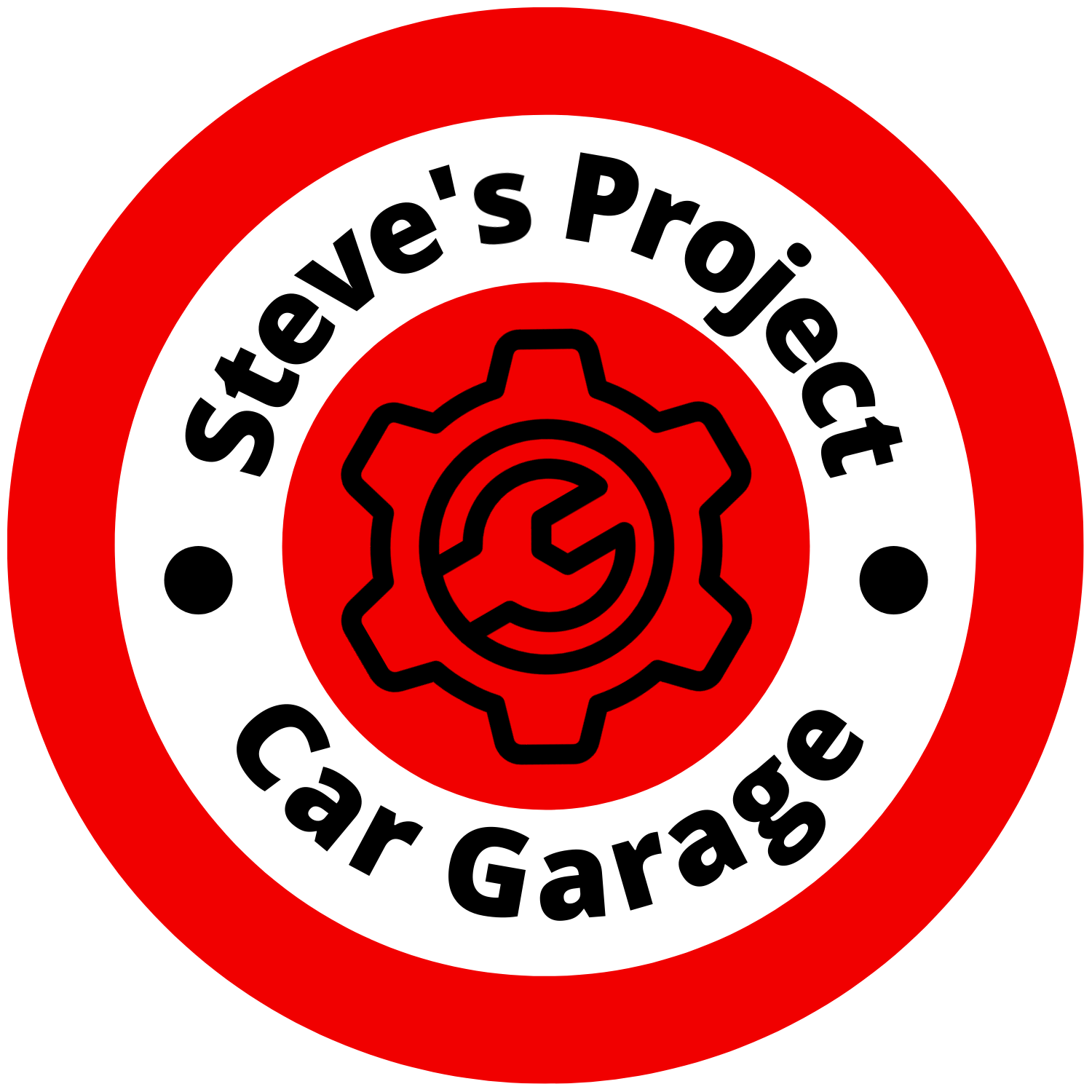 So this is where my YouTube series "Steves Project Car Garage" got its start! I felt that it would be fun to document a total noob trying to restore a car. I have done some automotive stuff here and there, but never anything to this extent. Please check out my YouTube channel if you are into that kinda stuff. I will be posting links and recaps of each video in this thread, as well as general discussion. I will also be asking for lots of advice, so be prepared for some crazy or silly questions.

Thanks for taking the time to read my story.

This is my 1969 Triumph Spitfire Mk 3, and its story about how I came to acquire the car and what I plan on doing with it.

More rot is discovered on my 1969 Triumph Spitfire restoration project. Take a tour of the car while I show you the areas of concern, and I remove the wiring harness for the 2nd time!

Follow along on the next phase of the restoration of my 1969 Triumph Spitfire. In this episode we start the teardown by removing the doors, boot lid and the fuel tank. I did some work off camera with the fuel tank and that thing is gross! I will have to do a full restoration on that which should be interesting.

Offline
Exploratory Surgery - Triumph Spitfire Restoration - Part 8
Come along as we tear into the sills of this Restoration Project! We dig deep and see how bad the rust really is and how much work I have ahead of myself to save this car!

Offline
Practice Welding! - Triumph Spitfire Restoration - Part 9
In this weeks video I practice some MIG Welding! I also take a deeper dive in the concerning areas around the heel board, and radius arms.

Offline
Rear Wing (Quarter Panel) Removal! - Triumph Spitfire Restoration - Part 11
Tonight on Steves Project Car Garage, I start to remove the rear drivers side wing (or quarter panel for us Americans) and I reveal an amazing donation as well as other plans for the build!

Offline
Spitbits Parts Order Unboxing! - Triumph Spitfire Restoration - Part 12
Tonight on Steves Project Car Garage I unbox my largest order yet from Spitbits! Check out what I got for my build.

Offline
Tub / Body Bracing - Triumph Spitfire Restoration - Part 13
Tonight on Steves Project Car Garage I will be welding in some bracing for the tub of my 1969 Triumph Spitfire project car. This will help protect the tub from twisting when I replace the floors, and eventually take the body off of the frame.

Offline
Radius Arm Removal - Triumph Spitfire Restoration - Part 14
On tonights episode of Steves Project Car Garage, I remove the Radius Arms of my 1969 Triumph Spitfire. Not all goes to plan... Decisions were made, and grinders were required.

Offline
More Heelboard Removal Prep - Triumph Spitfire Restoration - Part 15
In this video I cut out part of the drivers side floor, and start to remove the bad metal from the B post in preparation of heelboard removal.

Offline
Sorry for all the spam!

I just wanted to log my progress and the different videos here. That last one is the most recent video. I usually get to working on the car on Friday and Saturday nights because that is my weekend. The next job is to remove the heelboard. I have gotten a start on removing it, but it seems like this will be a slow process because I want to remove the tunnel as well and leave all the good metal in tact. So wish me luck over the weekend!
OP

Offline
Well, I decided to go stimulate the economy today. I initially went out to purchase an Air Compressor because my current one is just to small. They had it on the third level rack and needed a lift to get it down. Coincidentally next to it was an open box Lincoln Mig Welder. I have been in need of both for a while, so I asked if they would give me a deal on the welder seeing as it was open. The associate said no, so I told them I would think on it for a bit.

I tried putting the compressor in my 2012 VW Jetta. In the back of my mind I knew there was no way that this would fit. So... I went to the service desk and asked to rent the truck. $19 later and the compressor was home. Not bad.

When I returned the truck I asked for a store manager. After doing some talking and having them retrieve the Mig Welder from the shelf I was able to negotiate a deal. They gave me 10% off which isn’t huge, but it paid the tax and then some on it. All in all I was out the door with the Mig Welder for less than the listed retail price including taxes. Happy day! 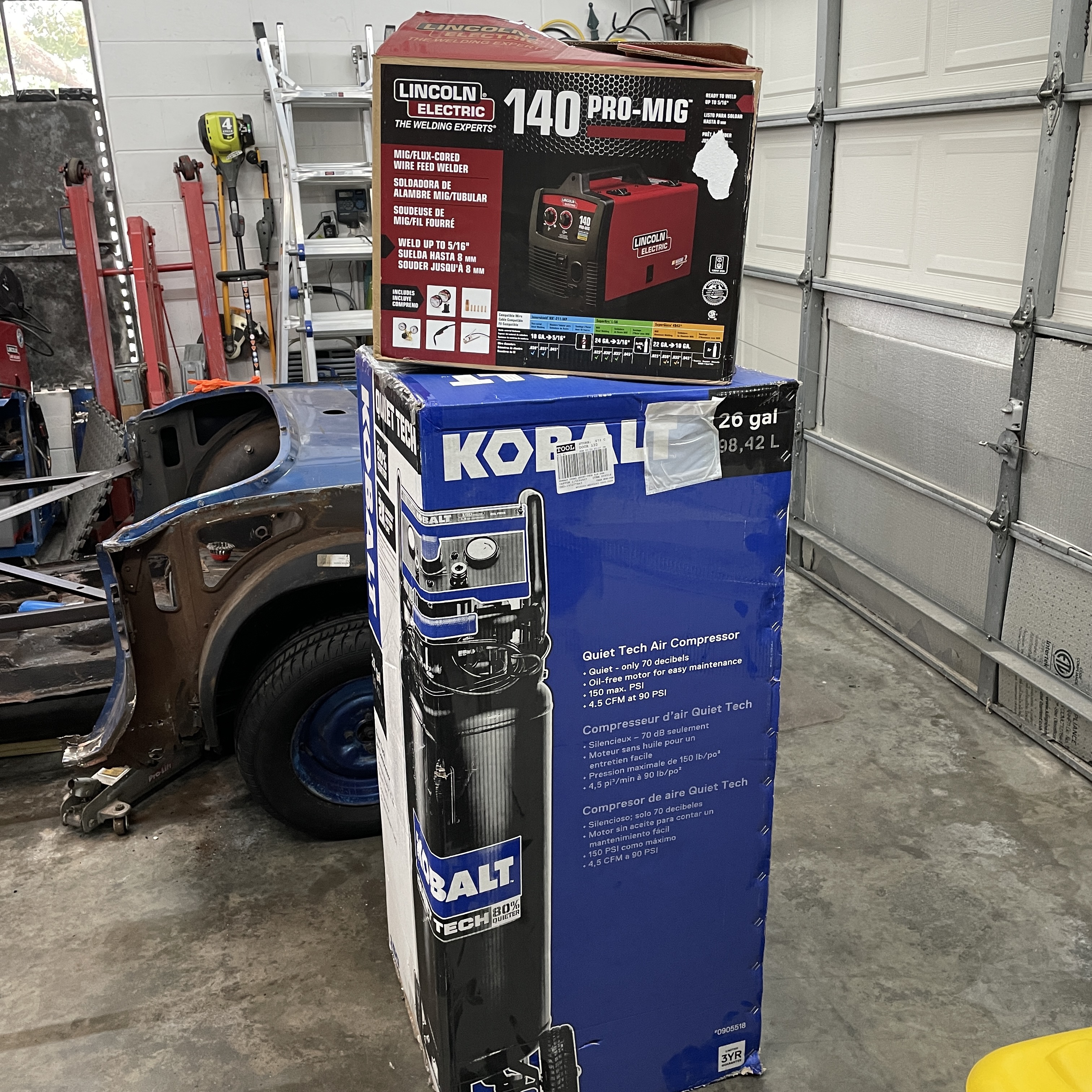 Offline
Spent some time this morning tearing into the heelboard. I finally got the drivers side off. I’m taking a lunch break now but plan on tackling the passengers side after I watch FP1 at Imola.
OP

Offline
Here are some pictures of the progress that I made. I will be putting a video together and posting it once I finish the passengers side. I really don't want to post until this thing has been fully removed. 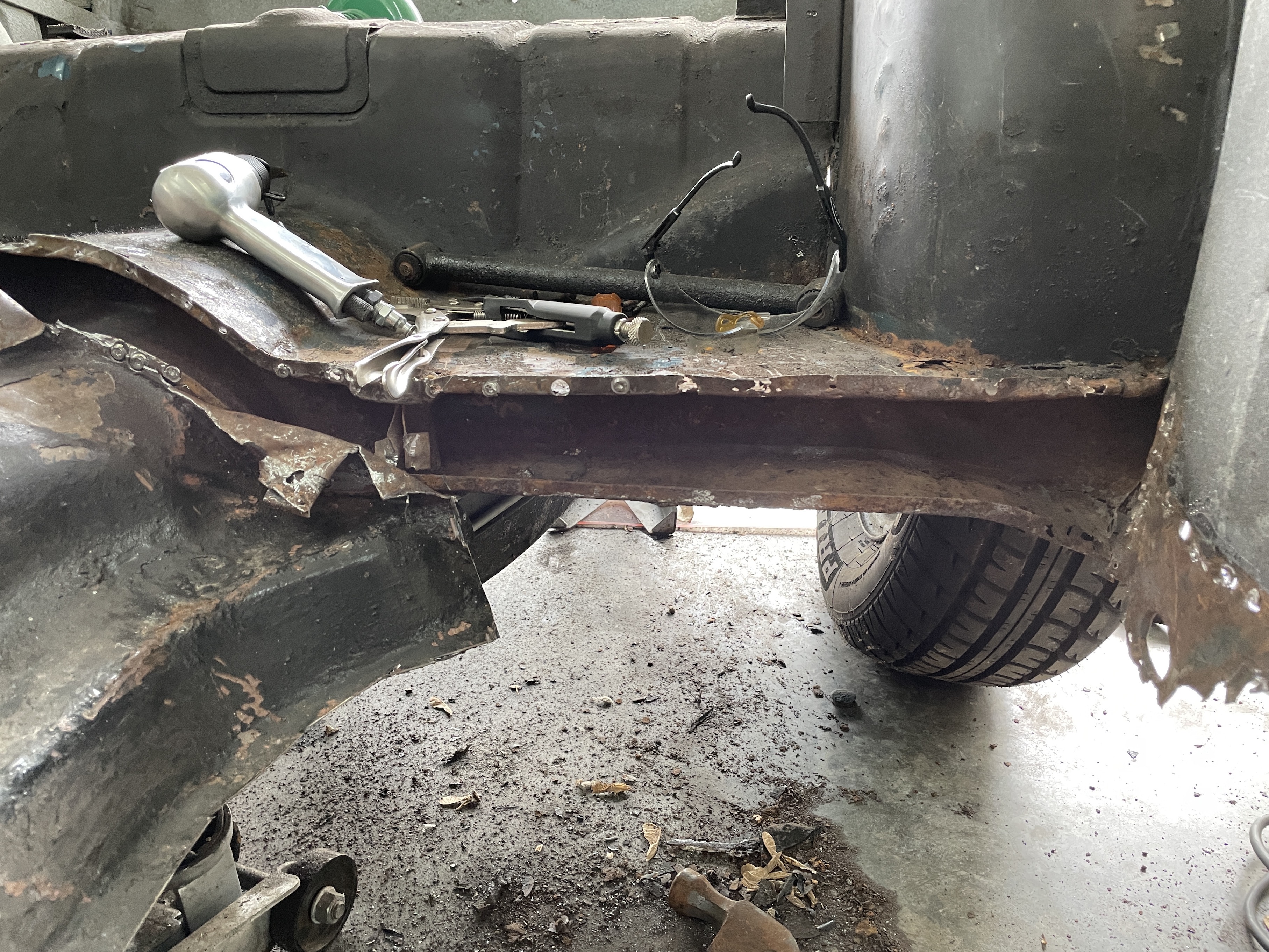 ​
As you can see the Heelboard Support is in ok shape with the exception of the end where I will need to weld in some new metal. I am hoping to not have to replace that too. It appears that there were no set welds holding the bottom of the support to the heelboard which seems odd. Once I get everything put back together, and I have the body off the frame I will put some plug welds on it to attach to the new heelboard. I am still waiting on my lower B Post patches from Rimmers too.

I plan on cutting the tunnel out too so that I can make a clean separation of the heelboard and the tunnel. I will also strip back the paint, and hammer out the dents in it. 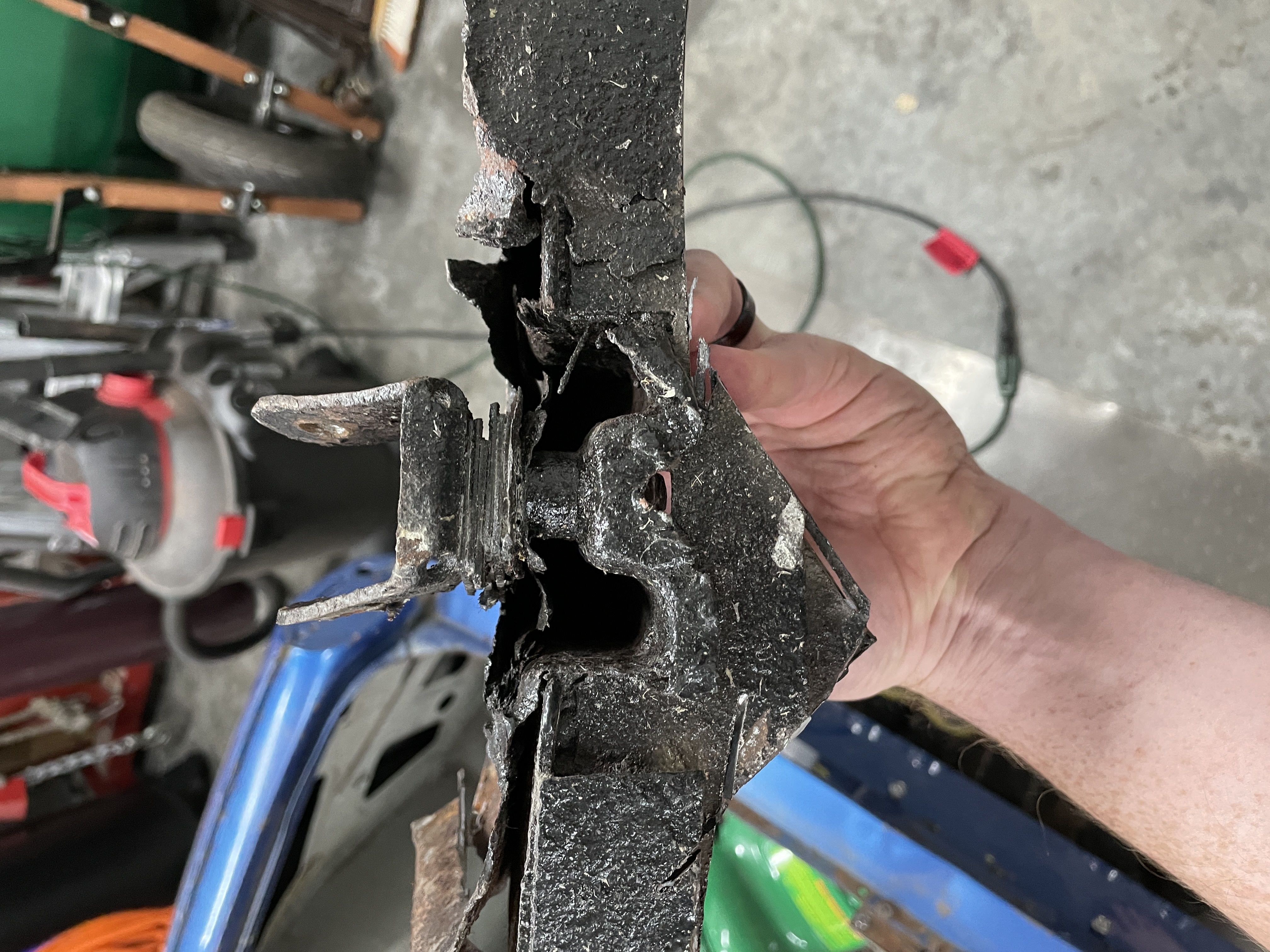 This is the reason that I decided to dig this deep. Im fairly certain that it shouldn't look like this. 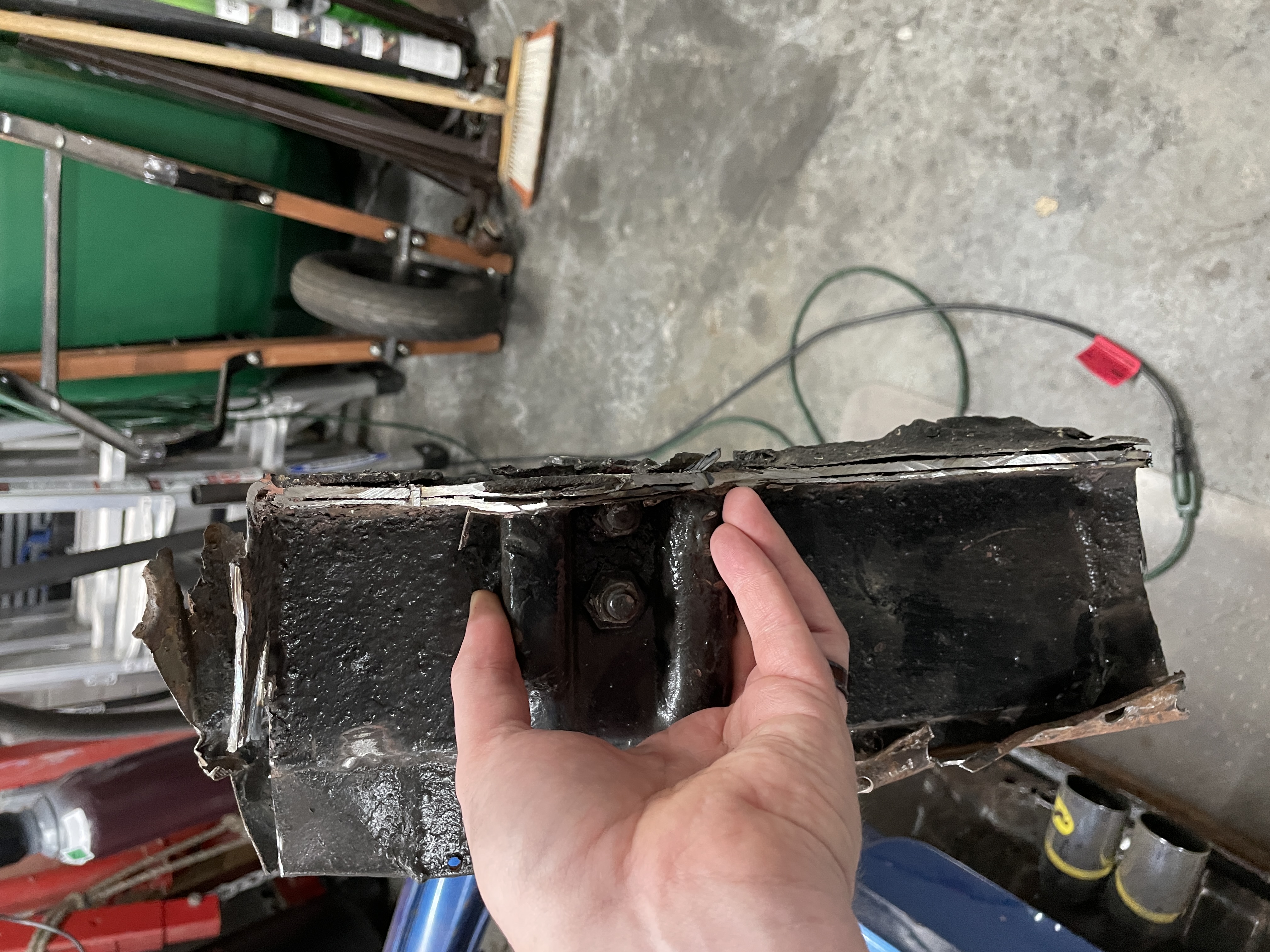 Here you can see 3 layers of metal. Original floors, 1/8" thick plate steel, then the current floors. This was a total hack job. My grinder did not like cutting through that plate steel. It did it, but it chewed up a bunch of discs.​
OP

Offline
I have removed the heelboard, and part of the floors from both sides of the car. I know that many are going to cringe at the thought of this, but I think that it will be just fine. The heelboard was such a disaster and needed to be completely replaced.

I was able to cut the floors out from the mid crossmember back. I carefully cut out the trans tunnel, and have placed that off to the side for further refurb once I get to that stage. It was a mess before I did anything to it, so it will have a lot of work that will be needed.

It took me a good while to get the heelboard removed, but it is out, and my B post patches should be here any day now from Rimmers.

I plan on welding those in, and repairing the rot on the heelboard support beam and also doing a serious rust treatment to the support, then priming and painting it. Going to keep that from rusting again...

I apparently have triggered some on Facebook, and have been told that what I did should never have been done. I guess that I am crazy, but I think it is going to be just fine. 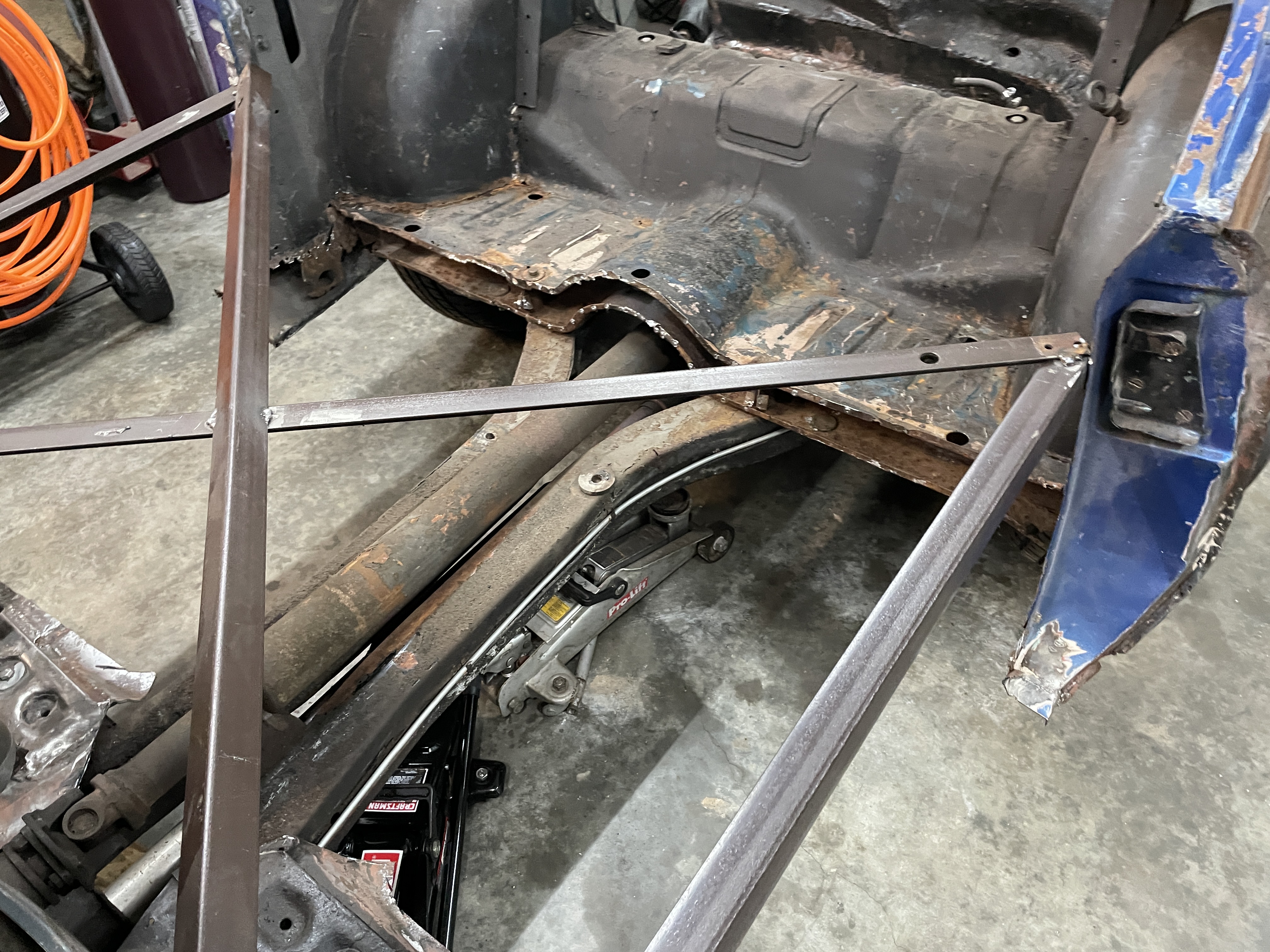 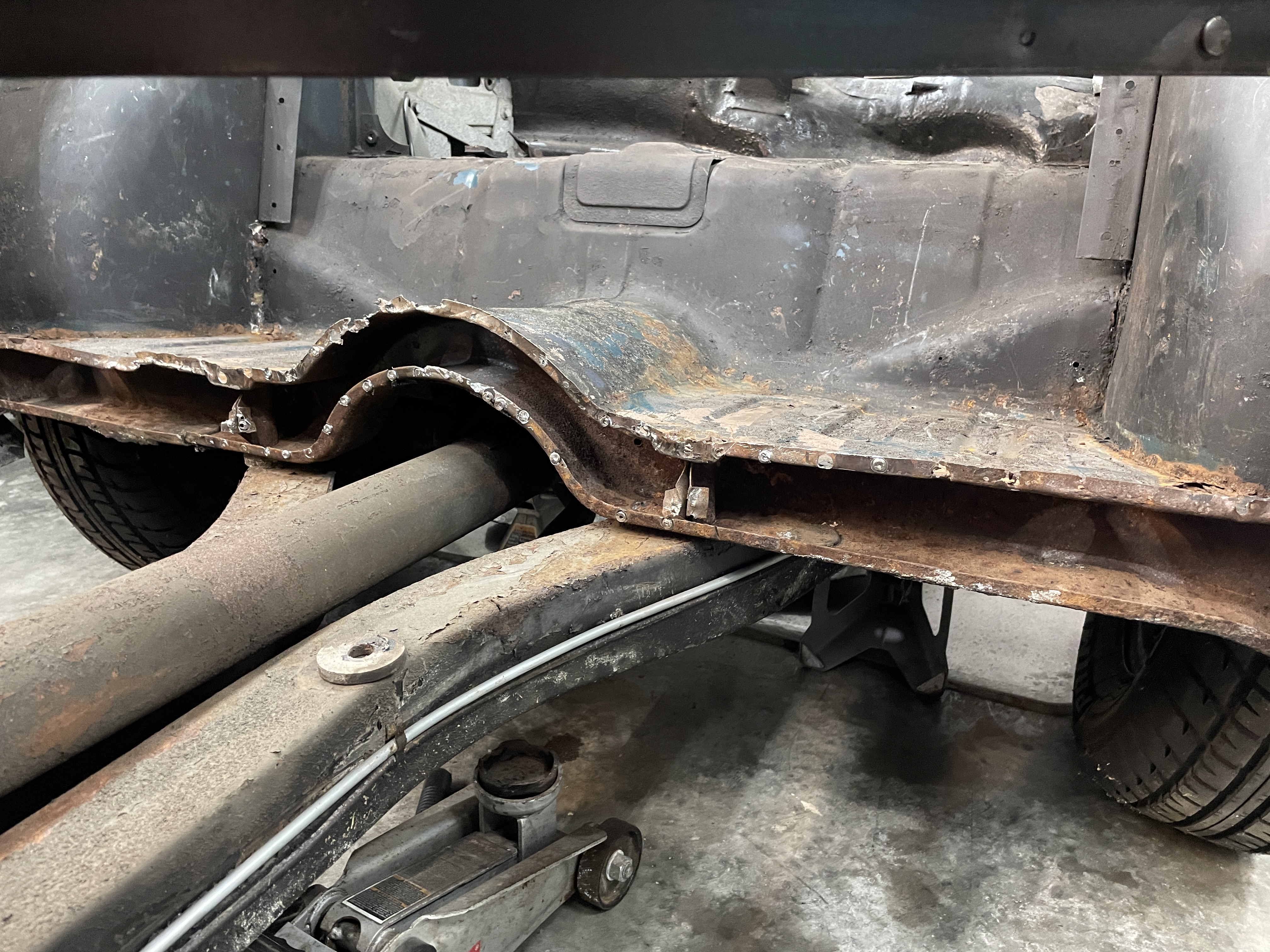 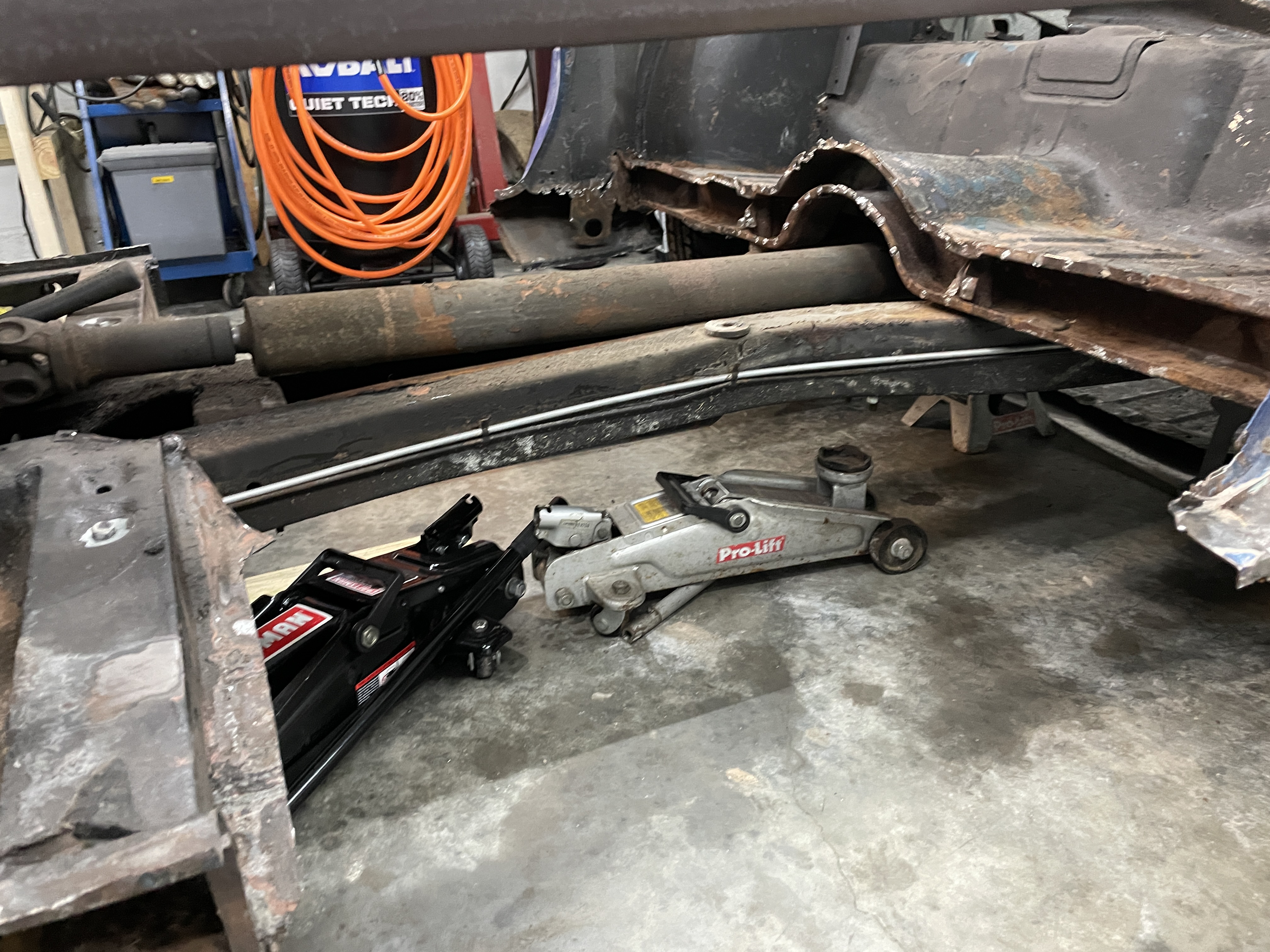 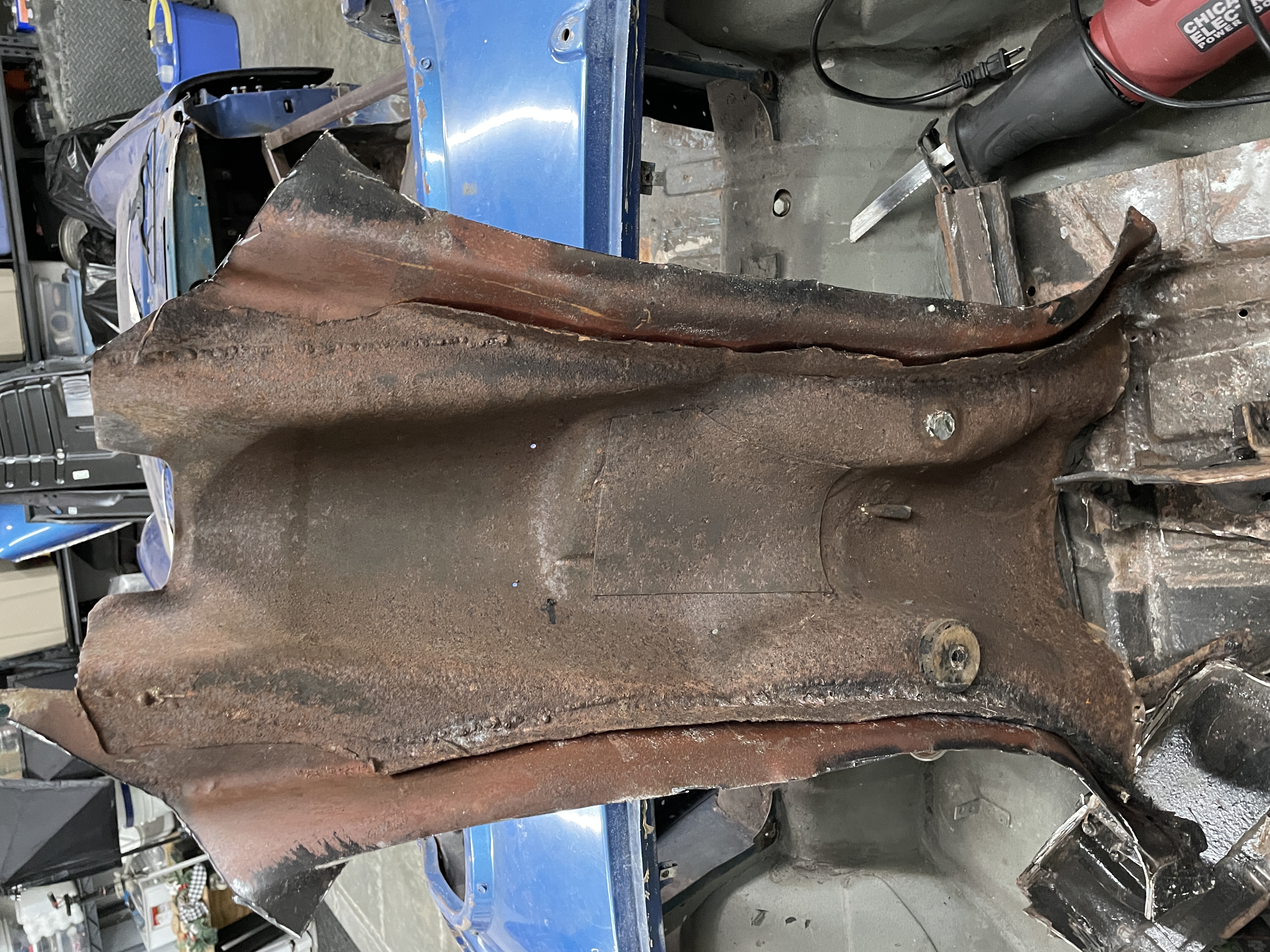