Offline
Hi folks,
Just found the source of the oil leak on my 74 TR6 - behind the shifter in front of the U joint. It has obviously been leaking awhile and when I put it up on jacks ( for over a month while rebuilding the front end), the leak worsened with the transmission oil heading south. Is there an easy fix to this? At this point, I have not started on my interior and the trans cover is off.
Thanks,
Will

Offline
I know the shifter can leak...and the rear seal can leak...but I'm not sure what can leak in between those.

The shifter levers have 3 0ring seals that are common leaks, which would come out in the area you are describing. Being at the top of the tranny, though, they would leak less when the tranny is not spinning.

The rear seal would leak straight down onto the cross-member, and blow rearward from there. It will leak running or not.

The speedo drive gear is in that area, left side on a straight tranny and right on an OD. It uses an o-ring for the hub and another for the internal drive shaft. It would also leak at all times, running or not.

The gasket for the tailhousing or OD is another source of leakage, but a bit forward of where you describe. Of course, if you have an OD there are multiple additional sources of leaks.

Finally, most tail housings have a vent hole. It will be on the top, and would not leak when the tranny is idle...but if it gets plugged it is possible it would cause an internal pressure to cause other leaks.

That's all I have got...if you have a picture I might be able to help narrow it down more...
John

Offline
I stuck a pin into that vent on my transmission in order to show it's location in this picture...it's small. 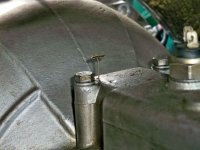 Offline
Thanks guys. I think it’s the rear seal as it drips down to the cross member right below and blows back. Will try to find and clear the vent hole. So, if it is the rear seal, I imagine the leak will diminish when the car is again level (it leaked before). Wonder if it is worth the effort to fix. Shifting appears ok but have only driven it a few miles.

Offline
Will As I look at pic of the TR 6 trans would it not be at the end of the output shaft flange seal before the U joint ?? If you just have the front of the car up then even more oil from trans. would leak to rear. I will be pulling my trans. this week for leaks and new clutch assy. You may be able to split drive line from trans. and lift trans from rear mount remove flange and replace seal This is from memory will be into it soon. There are ball bearings at either end of tail shaft so oil is in to oil that rear bearing. Madflyer
OP
E

Offline
Madflyer -
Just came in from the garage. Yes, before the Ubolt. I put a coffee lid under the area last night to verify the source. Also yes re: an increased oil leak due to the jacked tilt (jacked on both sides). I was under the car cleaning the area and could tell from the crud, that it has been leaking for some time, I just don’t know how much. I topped off the oil before I started the front end rebuild. It took a lot of oil (filled to the bottom of the threads as suggested); so it was low. The previous owner had never checked the oil level and it had not been driven very much in years ( I noticed a small leak area in his garage as well). Anyway, that’s where I am at this point. Thx.

Offline
Will if you do change that seal look at the flange before putting it back for any thing rough you will see where the seal was before. That seal can be set in or out a bit so it could run in a different spot if need be. not that easy to take out as I remember a hammer and small block of wood to install and adjust to flange. Not all leaks are bad some prevent rust. Madflyer
OP
E

Offline
Good advice. At this point, I think I’ll monitor after car is level. Thx for your help.
Will

Offline
You can always think of the slight leak as an “automatic oiler” for the rear of the car?!? As long as I don’t have to service any fluid levels between oil changes I am usually pretty tolerant of leaks.

If the tunnel is off, that seal isn’t too bad to get to. 4 nuts removes the drive shaft, which should push rearward enough to reach the large center bolt for the yoke. The tranny in 1st will give it enough drag from the engine to loosen the large nut. Normally the yoke will then be a slip fit, but sometimes it needs some coaxing with wooden hammer or puller. You then have access to the seal. Just be careful not to scratch the drive shaft pulling the old seal out with a flat blade screwdriver, if you don’t have a seal puller.
John

Offline
Will I just got done pulling my trans. And as John says It should be fairly easy to change seal. looks like the rubber mounts at the rear tale shaft would need to be replaced also. Some leaks are more work than the leaks its self need to be worth the fix. and some leaks just go behind a tree. Madflyer
OP
E

Offline
I’m just going behind the tree until I find a bigger stream. Hopefully I’ll be level again soon.
Thx

Offline
Tran. back in should test drive today all seals easy work new clutch and pressure plate and bearing and bushing. Old clutch was LUK not in bad shape after 15 plus years The B&B fell apart in a few years. My disk had maybe 50% left not down to rivets. New windscreen next. Madflyer

Offline
Thanks for the call Will any time.