Offline
I have a leak from the bottom of the transmission through what appears to be a freeze plug, if it were on the engine. Is there a way to seal this plug from the outside? I plan on draining the transmission anyway as I need to replace the overdrive brass plug gasket. Is there a sealant that will hold the oil in?

The last thing i want to do is remove the transmission again!

Offline
Is this the plug you are calling a freeze plug? 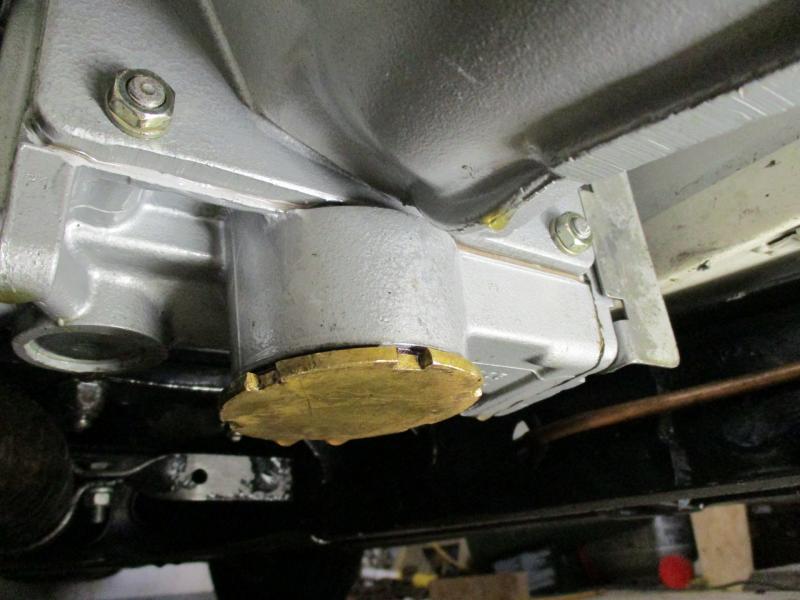 I used an "O" ring that I got from Ace Hardware to seal the big brass plug after I sealed up the leak in the adaptor plate. 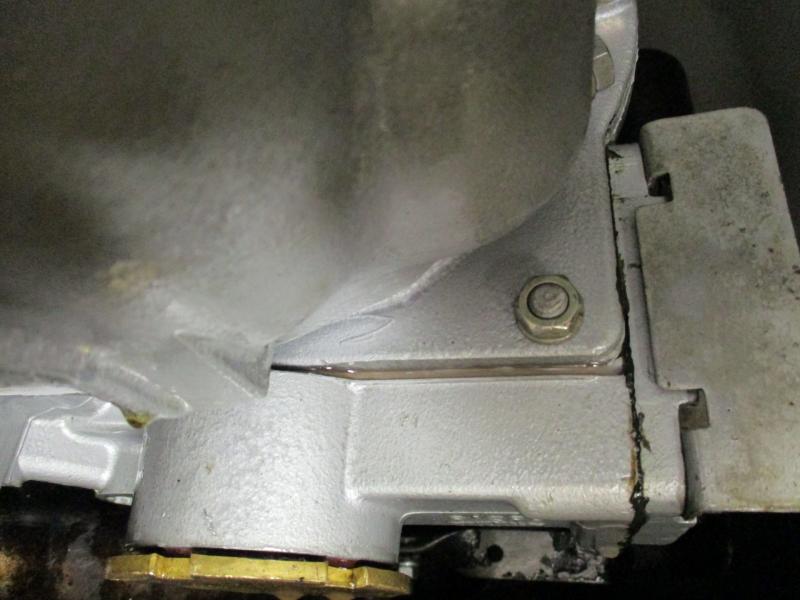 Offline
The plug I'm talking about is on your first pic, to the left of the brass OD plug.What you are saying, David, is the "O" ring seals better then the fiber gasket? I noticed that when I tightened the brass plug, with a new gasket, part of it seems to have squeezed out under the plug.
I noticed that the large black gasket, between the OD section and the rest of the tranny, has alot of oil on it. Anyway to repair these seems from the outside? How did you seal the adapter plate? Can you unbolt it and pry it far enough, apart, to get a sealant in there?What kind of sealant did you use? Maybe I can put some around the part I'm calling a freeze plug?

Offline
Jim,
The car only had 27k when I bought it 3 years ago. It had been sitting in the present owners garage for 30 years! Don't think any work was ever done on the Transmission. When the past owner found it, it was in the basement of a house that his company repocessed.

Offline
When I removed the brass plug I noticed that the sealing face was not completely flat so rememnering what John (CJD) had said he used to seal that plug I used an "O" ring from Ace Hardware. I felt that the seal that is sold is too hard to conform to much variation in the plug.

You can not pry the OD apart from the gearbox while it is in the car as far as I am aware and getting the surfaces clean enough to seal would be tough. Plus you may get junk in the OD as you cleaned the old sealant which would not be good.
I removed the complete gearbox and OD and separated it to reseal the joint.

You may be able to seal up that freeze plug with some JB weld. Not ideal but it could hold till you got around to removing the transmission for overhaul.

I was losing about a cup of oil from the OD a month. This is what I caught in my drip pan in a month.

That is a freeze glug, or at least what we've all come to call a freeze plug, as it has nothing to do with freezing really. But, back to the point, it is a "welch expansion plug" in British terminology. If it is leaking and you plan to drain the fluid anyway, I would recommend removing it and replacing with a new plug. I am sure one of the big 3 will have one, and if not, then measure the size and you should be able to find a suitable replacement in the auto-parts supplier market.

The plug is cupped, so that as you install it it with the convex surface downward, is slips into the hole. Then you wack it with a hammer in the center of the convex, and it oil cans into a concave surface facing down, and that locks it in place. Normally they never leak...but since yours now has a history, I would recommend a very small amount of sealant around the plug as you install the new one, just in case the hole has been scarred or otherwise damaged in the past.

Just adding sealant to the old plug may work for a month or 2, but it can't seal in the cracks once oil is saturated through them.
John

Offline
If my Band Aid fixs don't work I can remove the transmission fairly easily. I don't have the transmission cover or carpet installed yet. How easy is it to pry apart to seal the adapter plate and add the new freeze plug? Can you just pull it apart without messing up the internals?

Offline
Dick
It is not easy to pry the OD unit part to reseal as you can only move it back about a 1/4 of an inch because of the OD pump plus the rear splines in the OD unit.Most times it is not to hard the separate the the unit from the plate but that really varies. If you can you may be able to to add sealer. You do not want to pull the OD unit back any farther than that as it will have to be refitted and that can be a real pain to do.
Barry
OP
R

Offline
Think I will try to seal from the outside. What kind of sealer do you use? 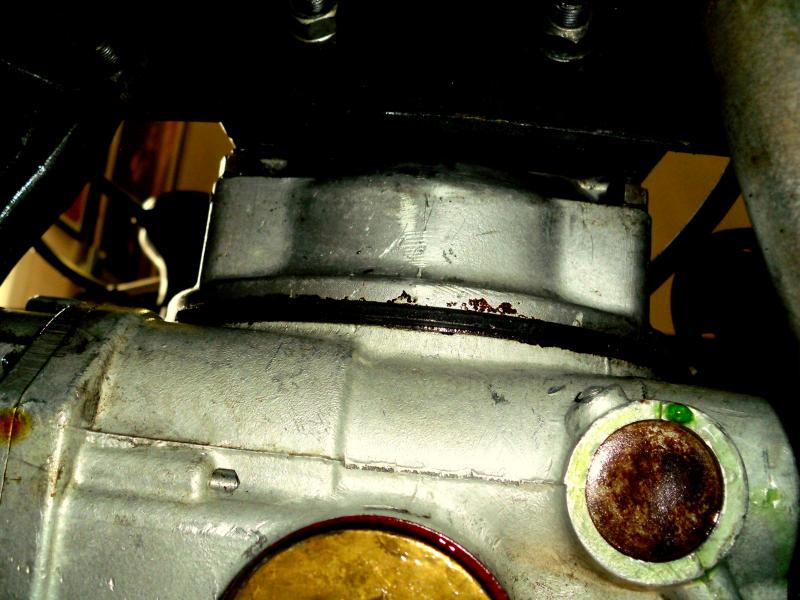 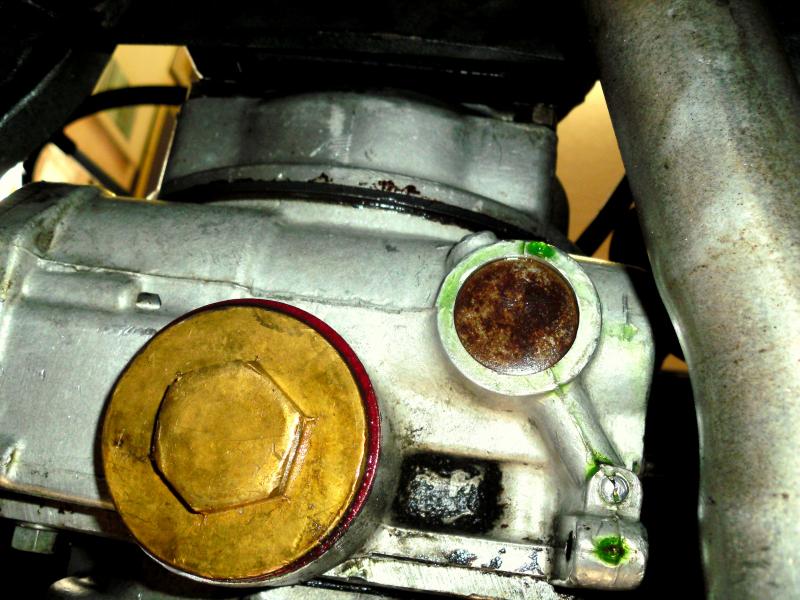 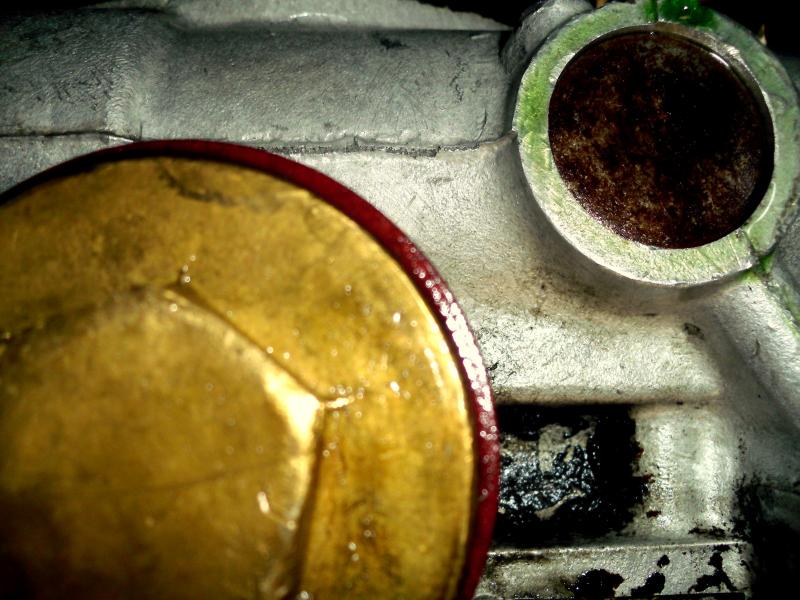 Offline
I don't think pulling the tranny will help with the welch plug. I believe it will have to be removed from the outside anyway, similar to engine block welch plugs.
John

Offline
How do you do it?

Offline
Normally you either puncture or drill a hole in the plug and use a screw driver in that hole to pry it out. Many use a body slide hammer to pull it. I'll have to study the OD manual to ensure there is nothing delicate behind the plug....but that should normally get it out. Replacing is a matter of coating the outside rim of the new plug with a slight amount of sealant and placing the plug in the bottom of the hole. Then tap the center of the plug to oil can it into place.
John

Offline
John, who sells that Welch plug? What type of sealer would you use?

Offline
You'll have to check the big 3 plus revington for the plug. If that draws a blank, then measure the diameter precisely and check with autozone, etc. They are normally standard sizes in 1/4" increments, but being British, anything is possible. Definitely find a new plug before popping out the old one, as once it's out the car will be down until you find a replacement.
John

I have Albert looking for one for me.

Offline
The seal under the brass plug looks way too big. I do not think my one extended outside the outer diameter of the plug.

You mentioned it was leaking from the black gasket. Is the black piece you can see in the first photo Mickey posted for you where it is leaking? If it is that is not the adaptor plate.
What is the green drips? Looks like antifreeze.

It is heavy and there is not much lifting room.
I made a lifting rig modeled on Graham's one and did the job on my own.

I made sure that the gearbox was in 4th gear and locked both the input and output shafts. That way I thought it should go back easier. There are 2 splines that have to be aligned in the OD. Also the oil pump plunger must be held down so the cam can clear when you are reassembling the OD to the gearbox. 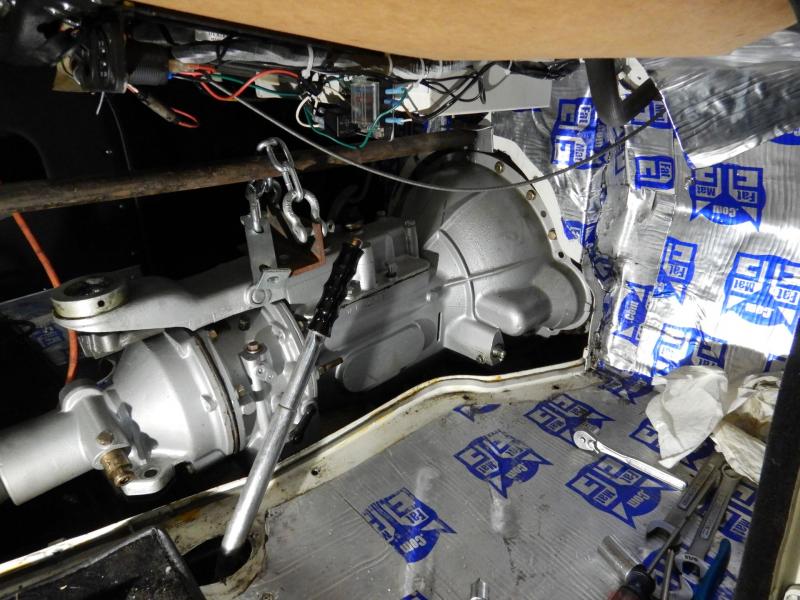 Redoakboo said:
If my Band Aid fixs don't work I can remove the transmission fairly easily. I don't have the transmission cover or carpet installed yet. How easy is it to pry apart to seal the adapter plate and add the new freeze plug? Can you just pull it apart without messing up the internals?

Offline
David,
That green fluid is the Penn Grade 80/90 transmission fluid.The black gasket is damp, but not the source of the leak. The major leak is the welch and brass plugs.