Offline
Wondering if anyone might have original AC compressor brackets they would be willing to part with. Or perhaps lend out so I can make a copy. Even just pictures and measurements would be helpful.

Offline
One of the issues with replacement air conditioning system parts for all BL cars of that time except Jaguar is that the cars came without a factory installed air conditioning system. Essentially each dealer installed whatever system they had decided to use so the first step may be to determine the air conditioning system manufacturer. The "official" BL air conditioning systems for Austin, MG and Triumph were under HACxxx or HACxxxx series of accessory part numbers and were made by Mark IV Manufacturing in the northern reaches of Fort Worth. There were two Austin/MG dealers in Dallas, one used the BL kits, the other used a different aftermarket kit made in Grand Prairie TX (seem to recall that it was ARA but not be sure of that). The lone Triumph dealer in Dallas County mostly used the BL kit but were known to use the kit from the outfit in Grand Prairie if the BL kits were on back order. Mark IV is long gone, sold to Volkswagen to make A/C system components and kits under the Volkswagen Parts Corporation umbrella and as air conditioning systems from the factory became essentially a standard, that part of VPC went away. As far as I know ARA is still around, they may be able to help.

Having said that, other than bracketry and evaporator housings, perhaps the evaporator and condensers themselves, most of the parts were commodity items. All of the period systems that I have seen used a 9 inch York compressor, off the shelf receiver driers, expansion valves, fans, fan switch and temperature switch. As a result, there is a reasonable chance that compressor bracket or set of parts making up the compressor mount system for a TR6 might work. The caveats would mostly come in with respect to specific year models and the emission controls fitted to the engine.
OP
B

Offline
I would try Summit Racing for some type a mounting bracket they tend to carry many custom stuff. I do have a TR 6 friend with dealer AC from California I ask for a pic see what he sends by E mail. Madflyer
OP
B

Offline
Unfortunately only a couple places make them and only one is like the original and they won't sell the bracket separately. Don't exactly want to spend $1400 for a kit i can only use the bracket out of.

BRSLimited said:
Unfortunately only a couple places make them and only one is like the original and they won't sell the bracket separately. Don't exactly want to spend $1400 for a kit i can only use the bracket out of.
Click to expand...

If you don't mind me asking, who is that source of period correct bracket set up for a York 9 inch compressor?
OP
B

Offline
It uses the modern sanden compressor which is what I will end up using. They are much more efficient on R-134. The old York compressors can run on it but they do much better with R-12.

Offline
OK My buddy sent me pic of his AC system and he also got rid of the York I can send pic by E-mail I do not know how to put his pic to this site. Madflyer
OP
B

Offline
You can email pictures to me at brs_limited@yahoo.com

Offline
This is currently on eBay: 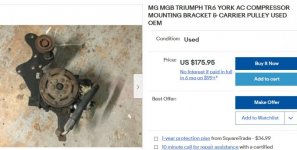 Offline
Steve. I saw that but it is off an MGB

BRSLimited said:
Steve. I saw that but it is off an MGB
Click to expand...

Offline
steveg Thank I got the pic to him Madflyer

Madflyer said:
steveg Thank I got the pic to him Madflyer
Click to expand...

People on the Forum would like to see it, too.
Steve Gerow
Altadena, CA, USA
1959 AH BN6 2-seat roadster / 1974 TR6 Emerald Green
Check out my galleries:
http://www.pbase.com/stevegerow

Offline
Steve Pic are to large for BCF I can send to you E-mail There are 4 pic.

Offline
Madflyer - sure send me the pix. Sent you my email in a PM.

PS - I rez them down by making screenshots - that gets them down to a few hundred k.
Steve Gerow
Altadena, CA, USA
1959 AH BN6 2-seat roadster / 1974 TR6 Emerald Green
Check out my galleries:
http://www.pbase.com/stevegerow