Offline
The PO has removed the PVC assembly and fitted the breather tube to the side of the motor. He also put on a non vented TR3(A) valve cover with the oil filler cap at the front of the engine. He said that it "hit" the hood because of it being in the front and the height of the cap. I also got the original vented valve cover. Since I do not need the vent I was wondering if anyone knew of a lower breather cap that can be used on the TR4 A that would not hit. I know I can use the original and put a breather filter on the vent but I would use the TR3 valve cover if it can be used as I am not sure I would like the breather filter sticking out on the TR4A one.

Offline
Why use an earlier TR4 valve cover with the push on oil filler/breather cap at the back. That would fit and with the draft tube would match the pre-65 crankcase breathing. 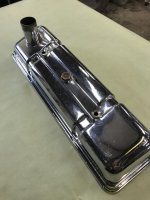 Fear God and Dreadnought
OP
B

Offline
The only reason is I already have the TR3 valve cover that came with the car along with the original TR4A one.

Offline
There is a good chance that you could sell the two you have, buy an early TR4 cover and end up with some change in your pocket.
OP
B

Offline
Yes that might be a good idea. I was just wondering if this had come up before amoung the people who had gone back to the open breathing system. Trying to use what I have. Selling makes sense.
Similar threads