Offline
I learned yesterday that I neglected to put the metal strip on my boot floor that anchors the bottom of the aft fuel tank cover. I've been looking for pics, but can't seem to find any showing the strip for a TR2. TR3's have a 3 piece strip...I am under the impression that TR2's have a single long strip...but I am just guessing.

Any TR2 owners have a pic...or even just the location and measurements would be outstanding.

Offline
Now I know how this'll go. As soon as I decide to guess what it looks like and weld it in, one of you TR2 owners will post a pic showing I did it wrong!?!
John

Offline
I do not think there was a metal strip on a TR2 or TR3. The rear tank panel has a crease/fold in it at the bottom, and that flap was screwed to the floor (facing rear of car of course). Chuck
C

Offline
Continuing my comment above - the TR3A's did have a metal strip.

Offline
So, maybe you did it right already John

When Drew came to pick up the donor frame, the first thing he mentioned was the missing strip. We even went to look at the old original fantail in the back yard, and there was absolutely nothing left of that area...totally rusted away! That explains why I never even thought about it. So at this point I really don't know...!?!
John

Offline
Huyah....You are absolutely right, Chuck! I finally put together a string of search words that got me a couple TR2 boot pics. No strip. So false alarm. Also very nice to have an answer that doesn't require more work...I can finally put the welder away...

Offline
I just received another pic of a TR2 boot. (Thanks to Drew). This one is a long door that does have a metal mounting strip. Now I'm really confused!?!

Offline
John, the picture I sent you is of TS41775, a TR3A, and my body shop misplaced the strip. The strip should be on the other side of the gas tank mounting straps. I have a number of pictures of TS5265 in a very original state, the pictures are too large for this site so a link to the album is below. I also looked at my original pictures of TS3445 and did not see a strip.

Offline
OK, I think it's coming together...

The white car pics were just pulled off google. I thought they were the same car, but I now realize that the top pic is of a later TR3...because of the fact the boot floor is raised for the wider sized tire that has to fit the spare holder. The bottom white car is a TR2...or very early TR3, told by the flat boot floor. So, I have learned how to tell the difference by the boot floor!?!

I know the post 60K bodies had the 3 larger tabs to hold the bottom of the cover.

If the red photo is a mid production TR3, then we can guess the single thin tab was added to the boot floor by 41k. This is apparently a long thin strip.

When I look as closely as I can to the imgur.com pics, I can't see clearly any tab. It appears the cover has a 90 degree fold to the rear, and the retaining screws go downward into the boot floor. Soooo....I think we are back to the assumption that the TR2's have no metal retaining strip.

That said...I then wonder if the screws going down and INTO the spare tire compartment didn't cause a problem. Like perhaps puncturing the spare if they were located wrong?? Thus prompting the metal strips to relocate the screw horizontally??

PS...I was looking through the pics, and I see the unobtainium fuel line clip you were talking about on the 3rd pic in the album!
John

Offline
Looking at photo No.11 it appears as though there is a strip on the floor.

Offline
More on the above. My small mouth TR3 (TS 156xx, January 1957) was unmolested in the boot area. It had no metal strip or metal tabs on the boot floor. But it did have four small holes (made by sheet metal screws) across the boot floor, where later cars had a metal strip. The gas tank cover I got from Moss had a crease in the bottom to allow you to foldout a tab (about 1 inch wide) parallel to the floor. This tab was screwed to the boot floor with four sheet metal screws. I guess Triumph made changes in the method of attachment as time progressed. Chuck
OP

DavidApp said:
Looking at photo No.11 it appears as though there is a strip on the floor.

Yeah, I studied that photo for almost an hour. I decided that what looks kinda like a metal tab looks more like part of the cover tab Chuck mentions, that is torn off the cover but still screwed down to the boot floor. Unless we get better pics showing otherwise...I'm still leaning towards Chuck's original post that the metal tab wasn't added until later.

Thanks to all for the input on this! I know it sounds trivial, but it is one of those little details that makes restoring fun to me.
John

Offline
My 54 unrestored TR2 with original trunk floor does not have the strip. 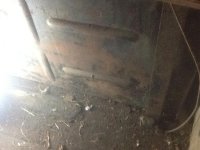 Offline
Hi John ... somehow missed your request for pics. Here are three of my early 56 TR3. Let me know if you would like more pictures and I'll dig up some more.

Edit ... just realized one of your earlier pics was of my car 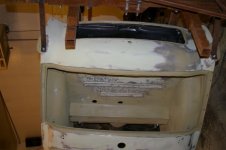 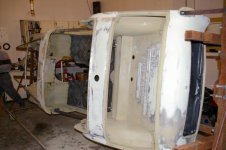 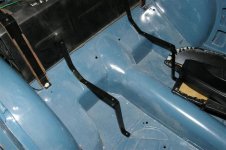 Offline
Thanks Vic and Mike! I think the consensus is becoming "no", to the earlier cars having a metal strip. Thanks again for all the responses!
John

Thanks...I'm sold on no strip!
John

mgedit said:
Edit ... just realized one of your earlier pics was of my car

That's funny...I'm actually to the point that whenever I google looking for a Triumph pic, I have started to get many of my own pics from this forum back too!?!
John