Offline
Alright, here is a chance to test everybody's diagnostic skills. The TR2 has started making a noise. This will be a contest to see who gets the problem first. I'll start by saying I currently have no idea what the noise is, so I can't play favorites, even if I wanted to. And I don't plan to work on it until the temperatures come down below the 100+ here in Texas, so the symptoms and checks you recommend will come to you real time as I am able to work past the heat wave.

In the mean time, let's see who can hit the problem. To make it interesting, the winner gets to pic a free part from my TR2/3 collection! So, here goes:

First, the car drives and feels absolutely perfect. It runs, cruises, and stops just like a new TR2 should.

Last week it began making a dull grinding noise when starting from a stop in 1st gear. It just happened all of a sudden...one second didn't make the noise...the next it made it at every start in 1st gear.

It only does it after the engine warms. It does not do it for the first mile following a cold start.

Once it starts doing it, it will do it at every start. It is a gravelly, grindy sort of an inconsistent noise, like something is dragging. It lasts until about 5 mph, and then quits.

It never makes the noise in 3/4 gears. Occasionally you can barely make it out in second...but only rarely. It also makes it sometimes in reverse...so only a low range noise.

I can duplicate it at will by stopping and starting. While doing this and hanging my head out the door like Momma said not to, it seems to come from between the rear of the engine and front of the axle. That's as close as I can pin-point it.

It doesn't make any noise if I just operate the clutch without putting the car in gear.


That's the initial symptoms...I'll check/test anything you guys recommend and report the results here.

Well, layshaft and bearings have fewer than 500 miles since new. The noise disappears completely over 5 mph while still in 1st gear. Pretty much by the time the clutch is fully out on a start the noise is gone. Then no noise going through 2/3/4 and OD. If you recommend a test I'll try it out.

Here is the layshaft going in with a brand new reverse gear: 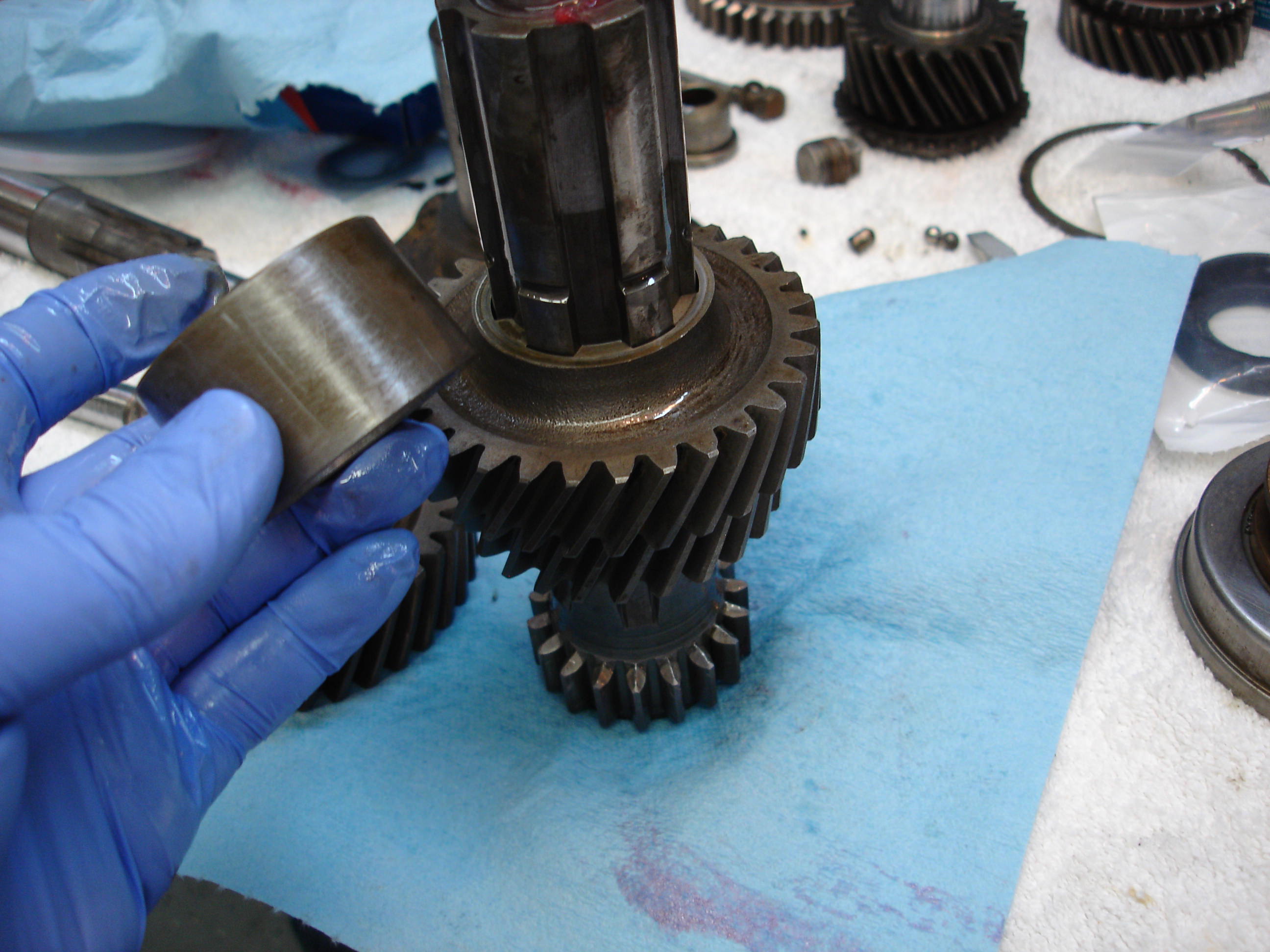 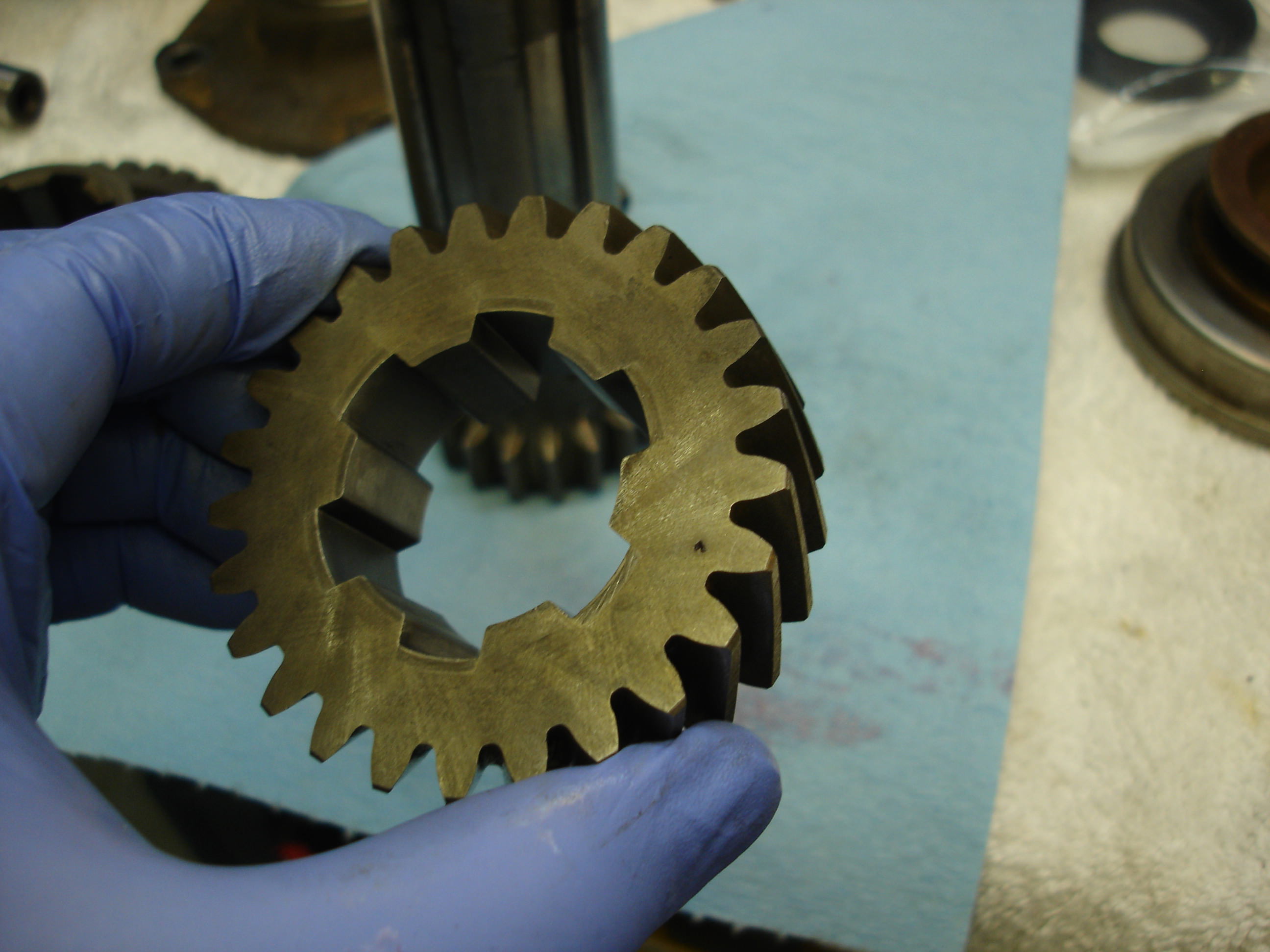 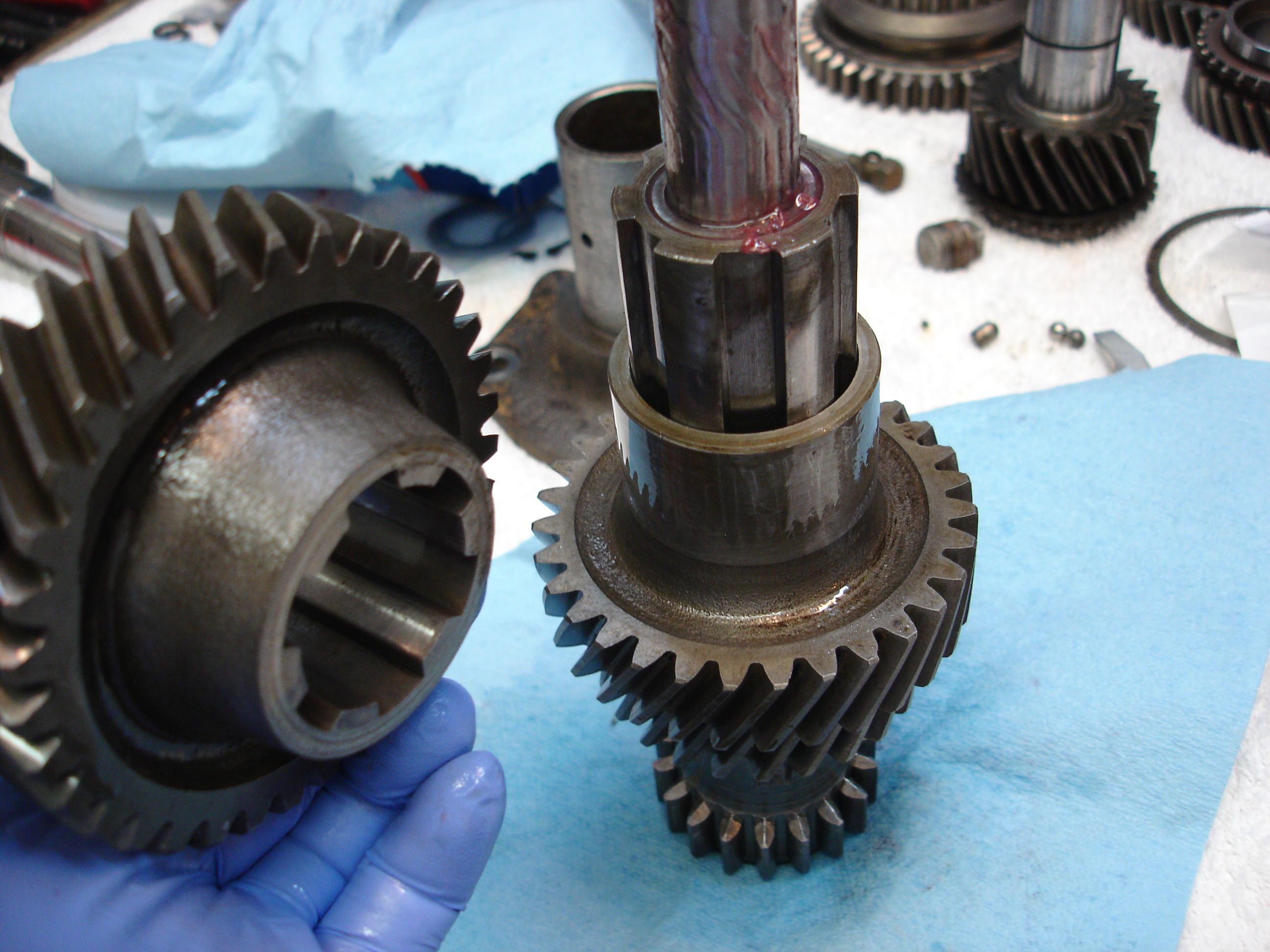 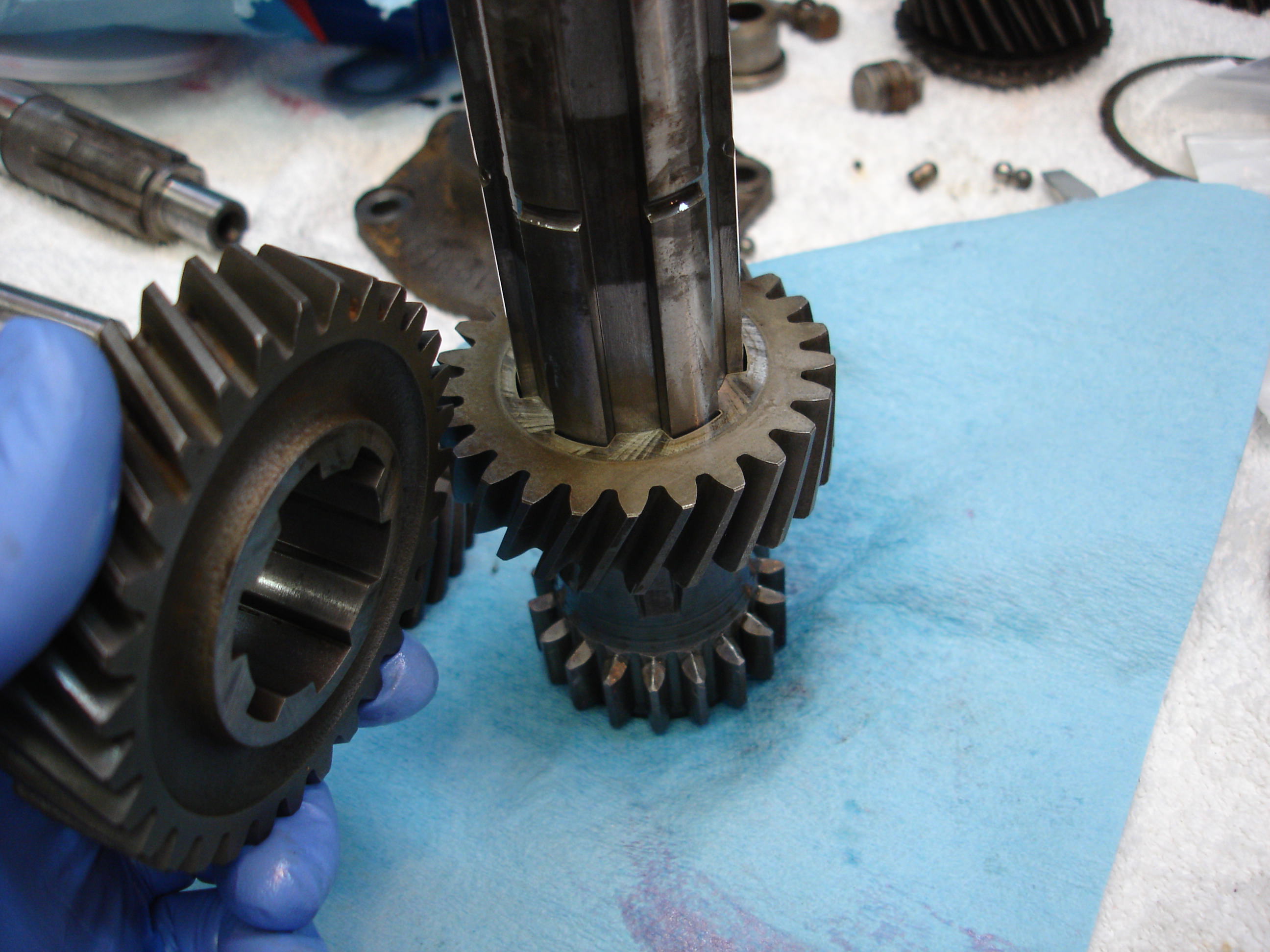 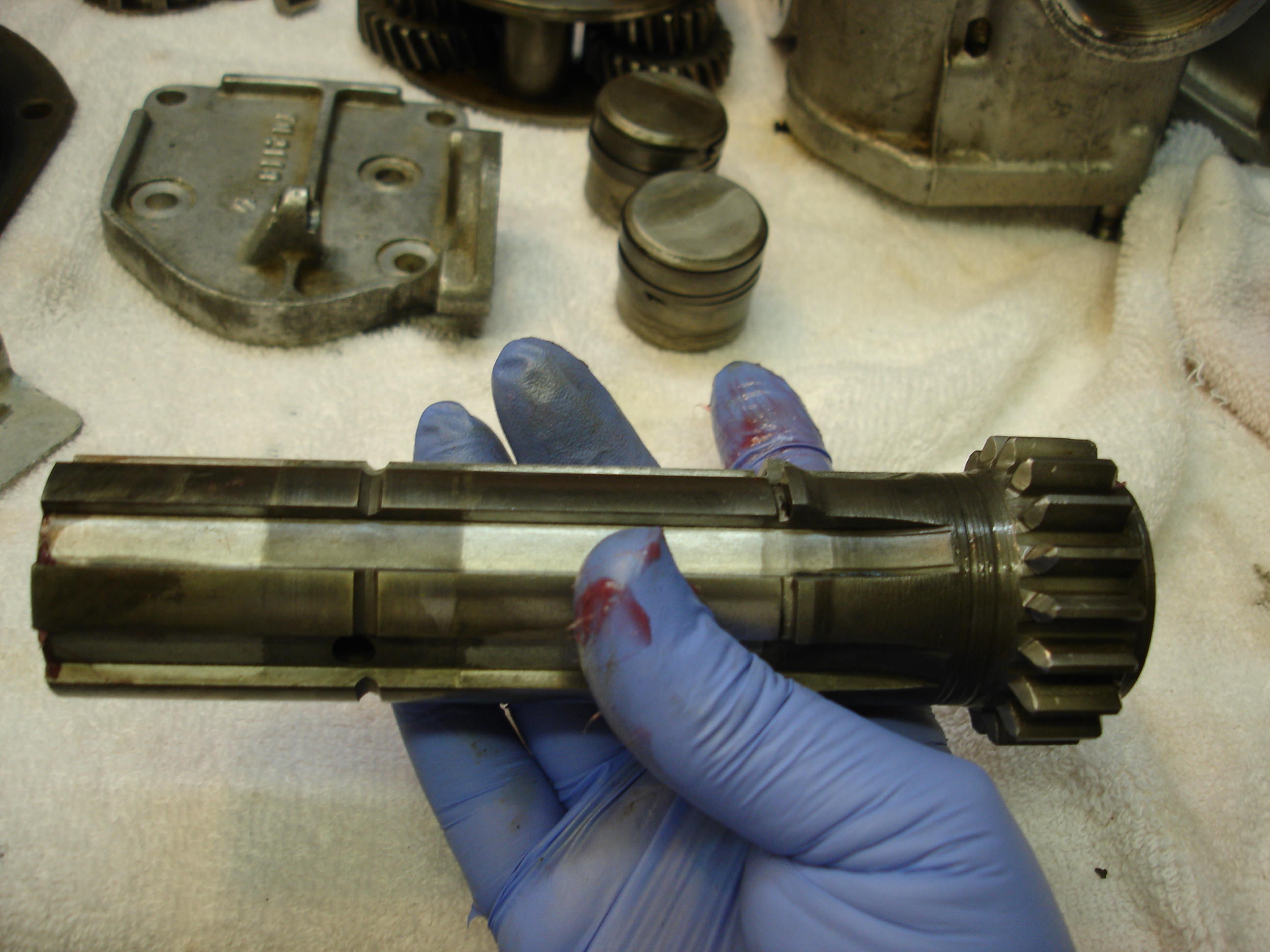 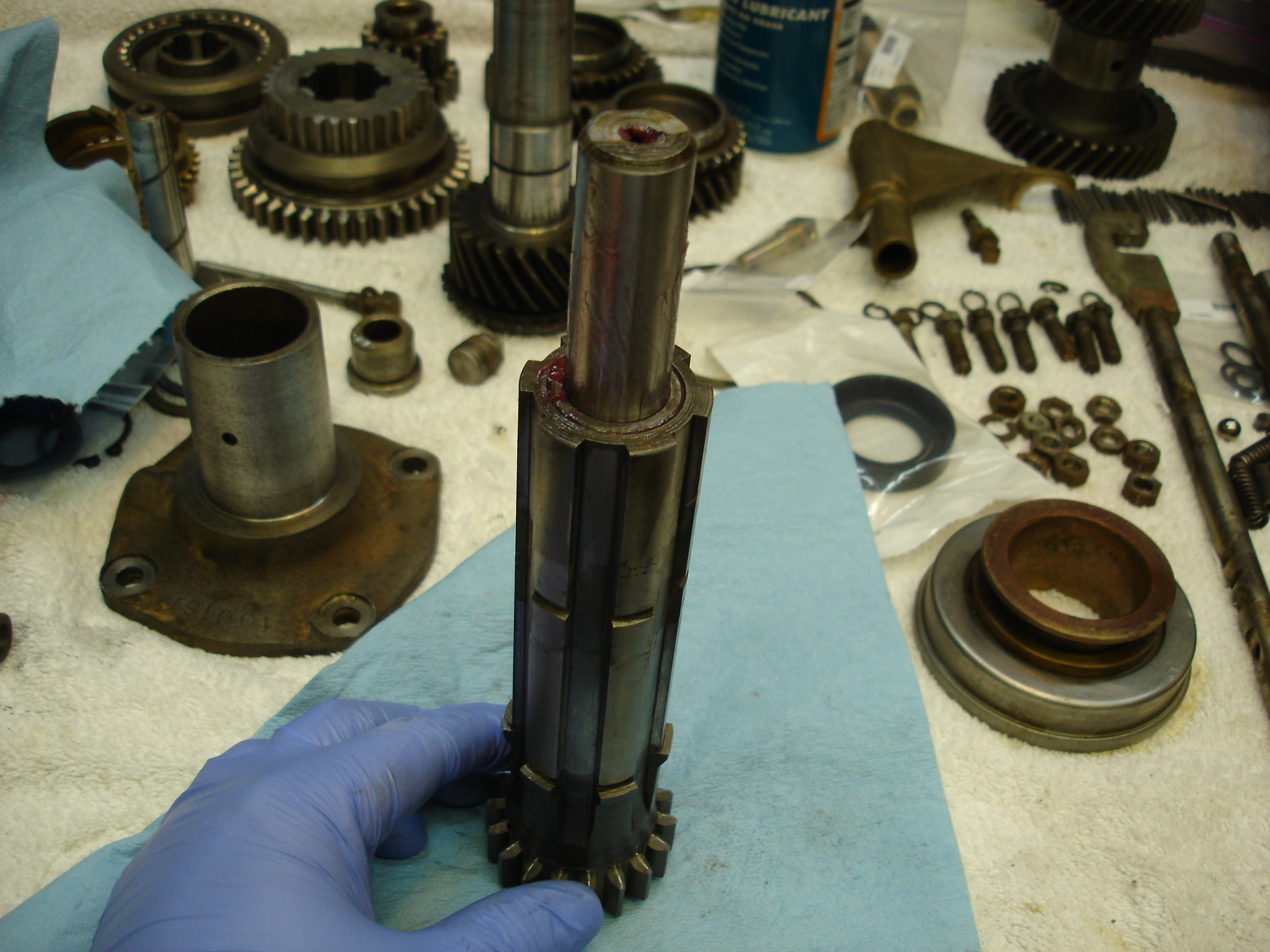 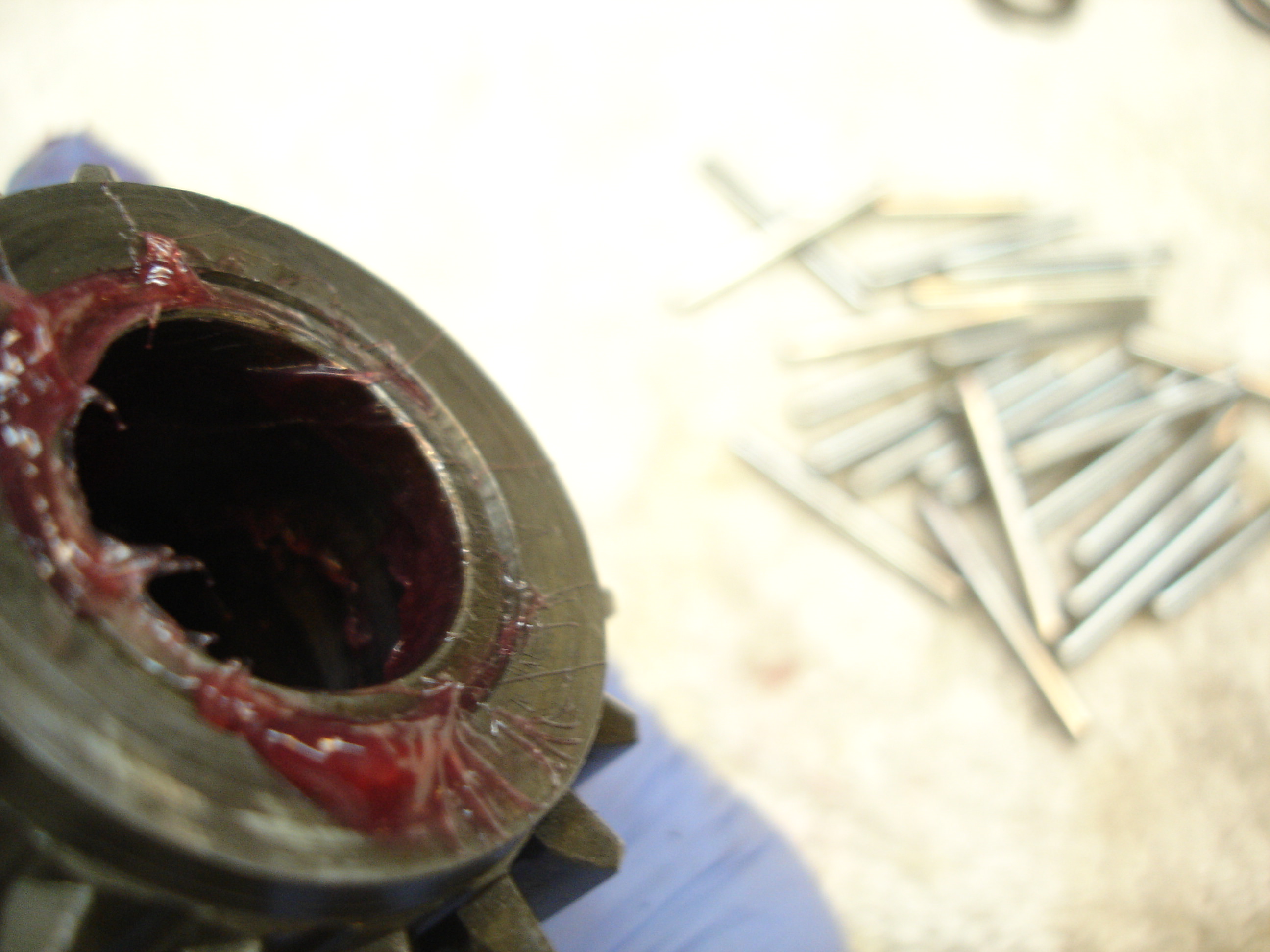 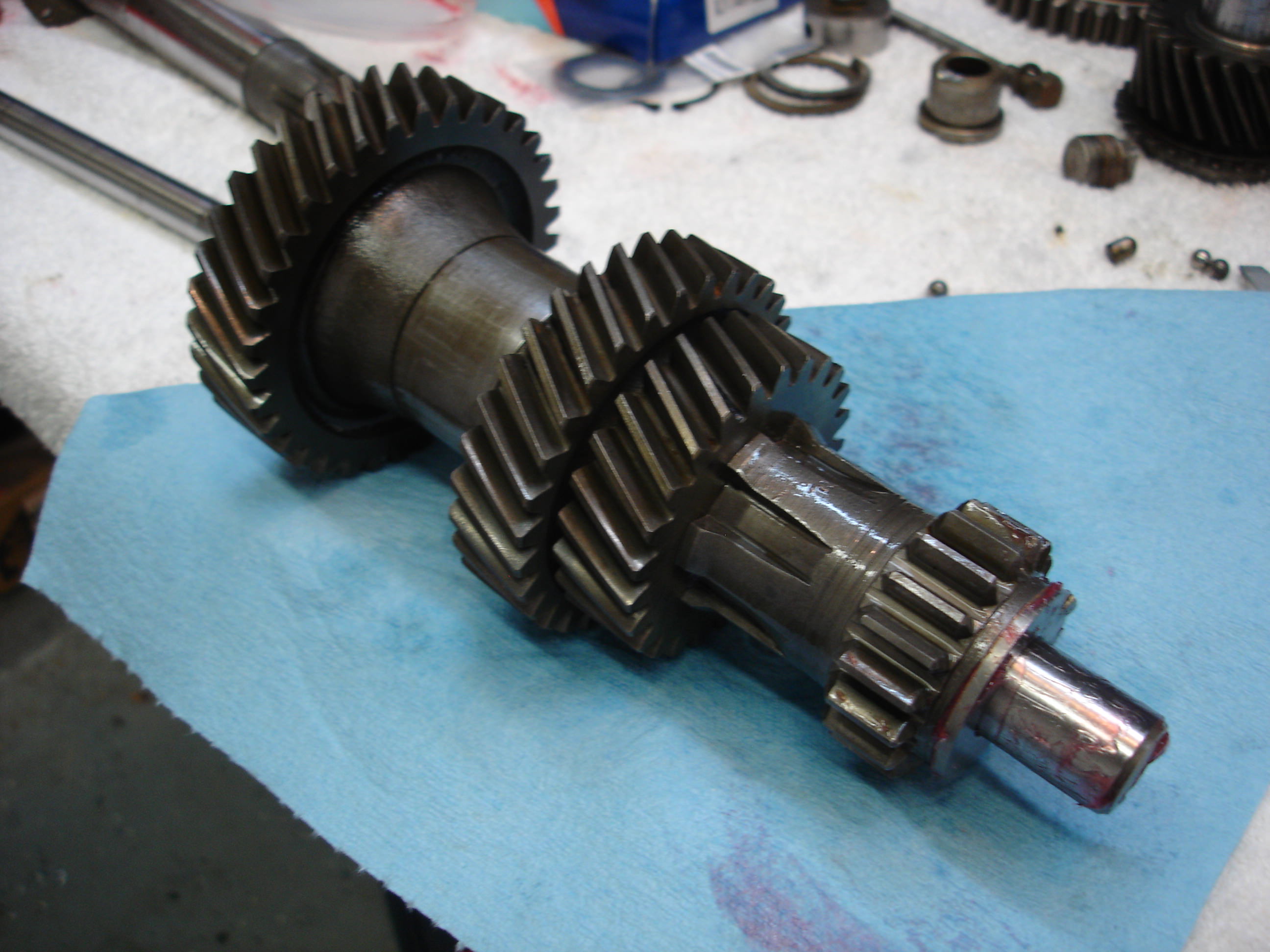 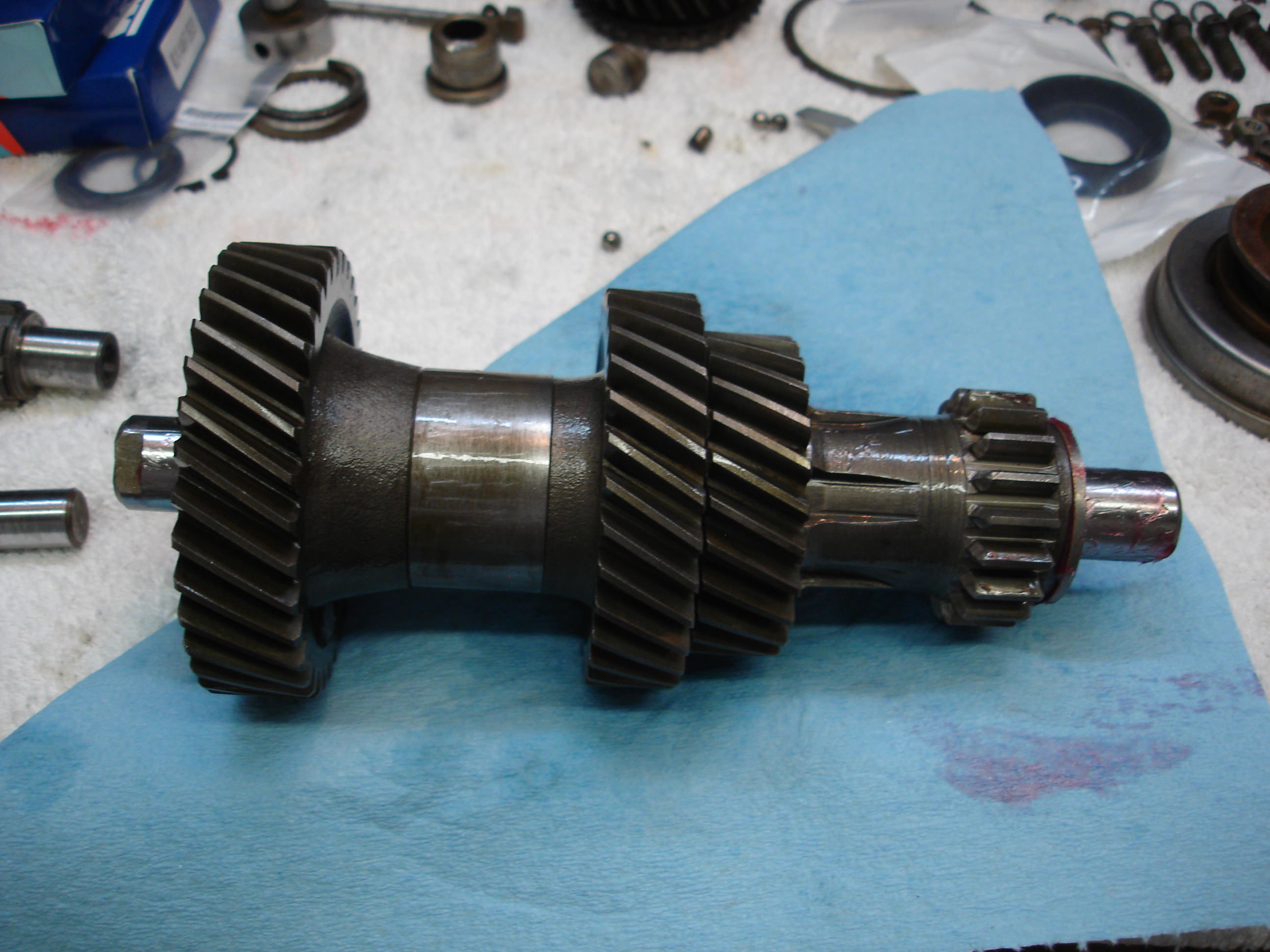 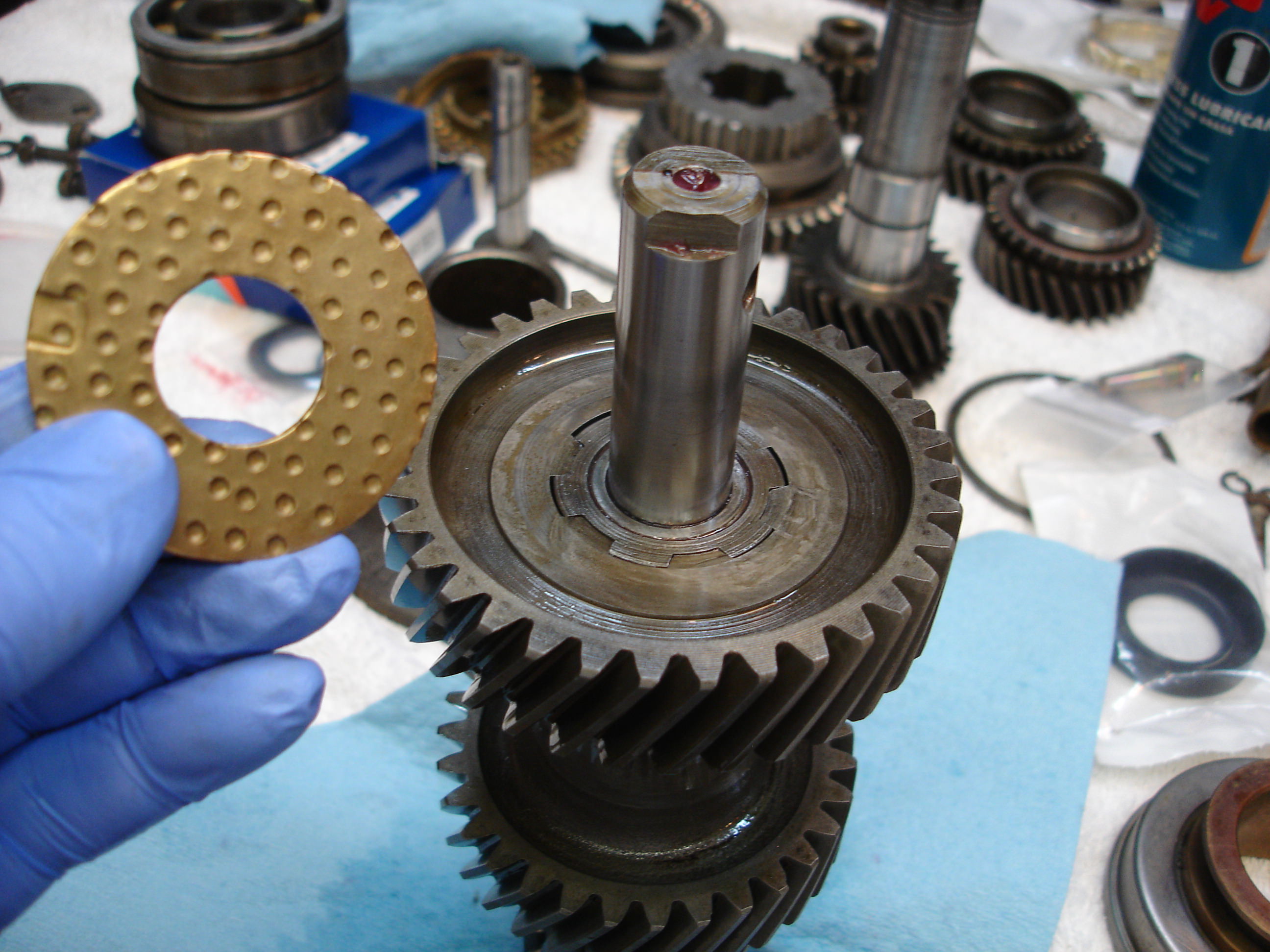 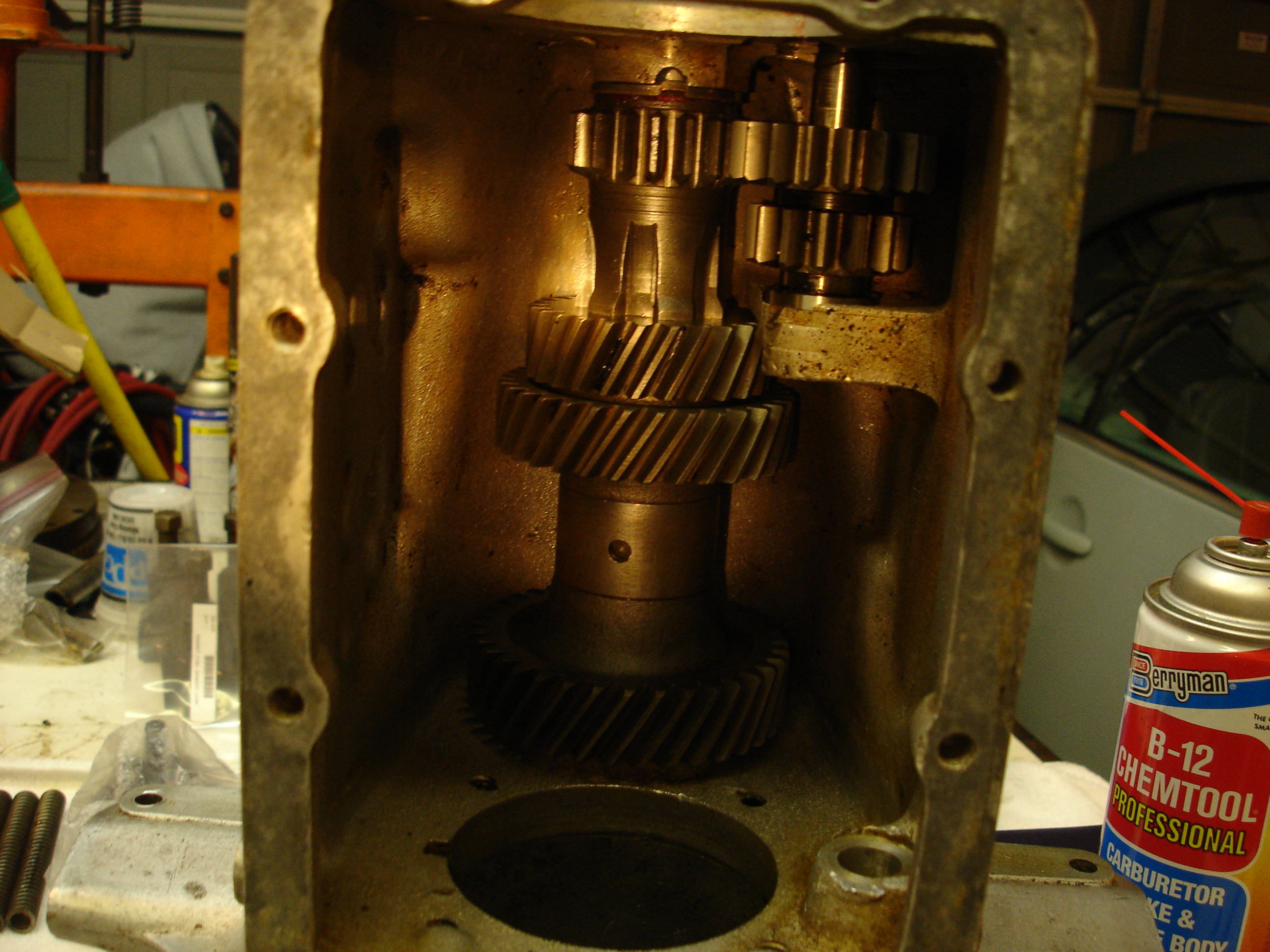 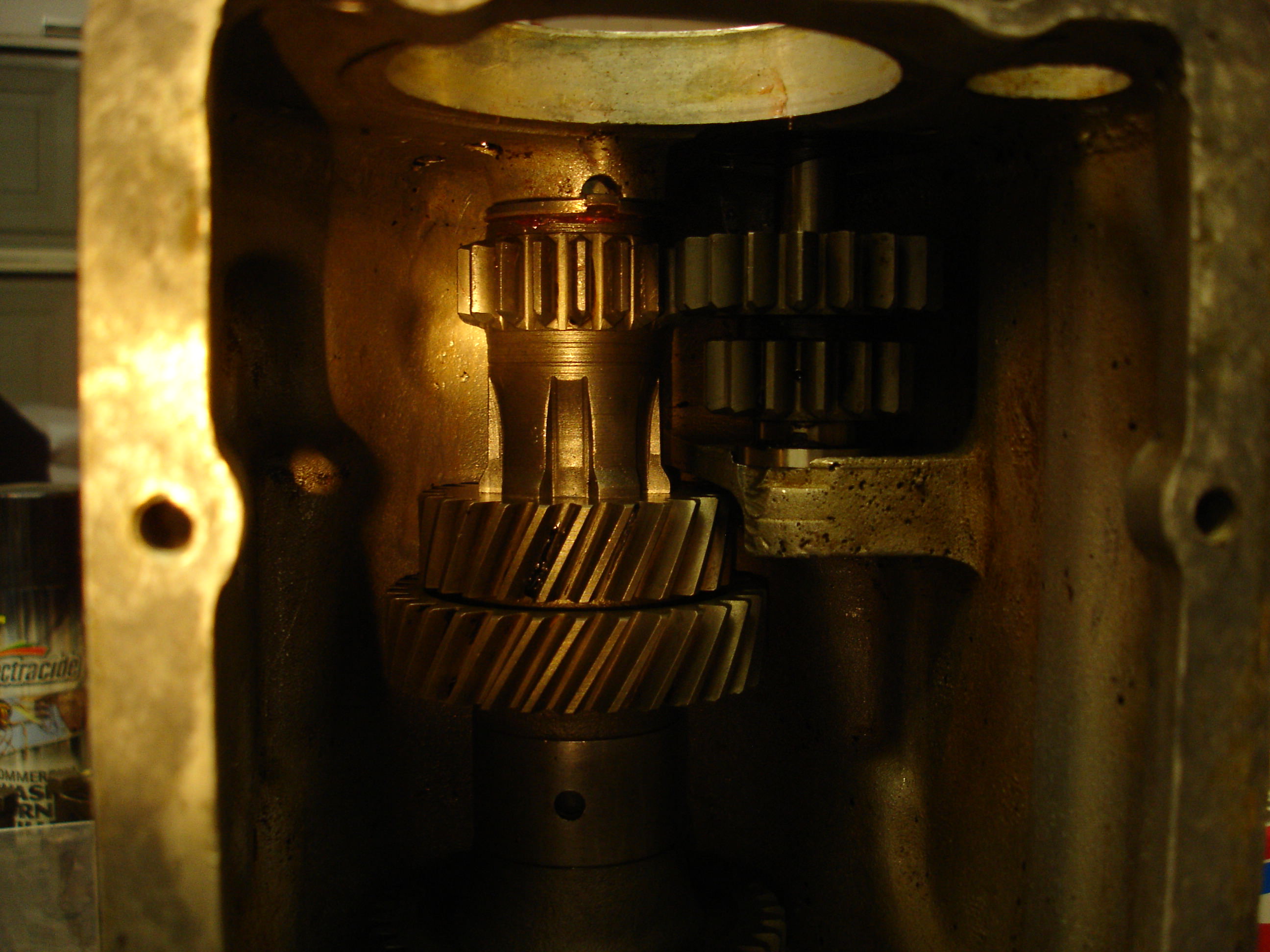 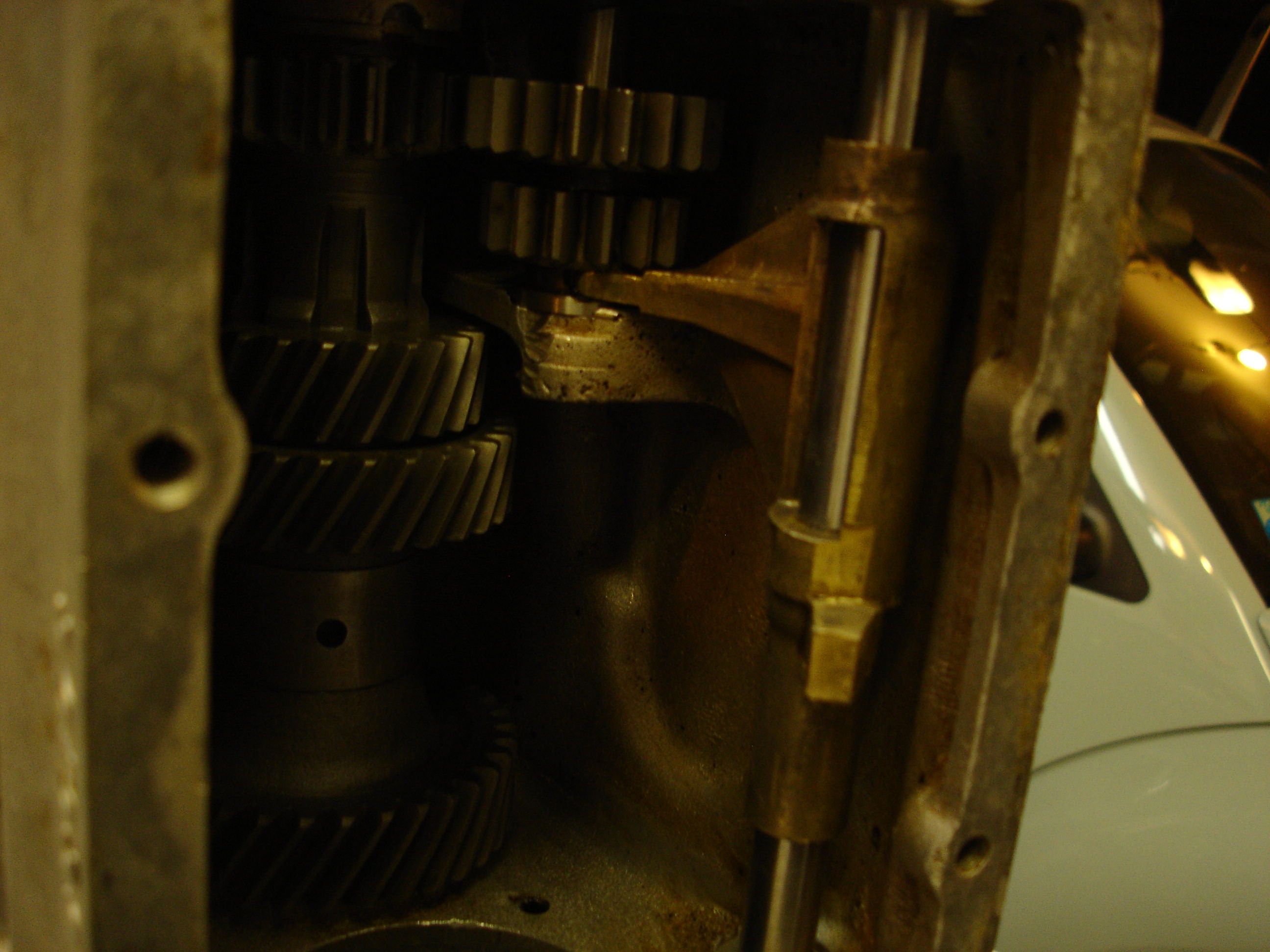 Offline
That’s a thought, Marv. The dip-stick shows the tranny full, but I suppose if the reverse gear was moving to contact the 1st gear just slightly it would make a similar noise. Normally the reverse gear would be disconnected from the other gears except when reverse is selected. I can’t think of any way to check that without opening up the tranny...so hoping it’s something outside of the gearbox and would like to check more before opening the box up. It does shift into reverse just fine, so the linkages have to be lining up and the shift rod detents seem to be holding the forks in place. The reverse gear was brand new during the rebuild, with a new bushing in it, so not likely the gear or shaft wobbling: 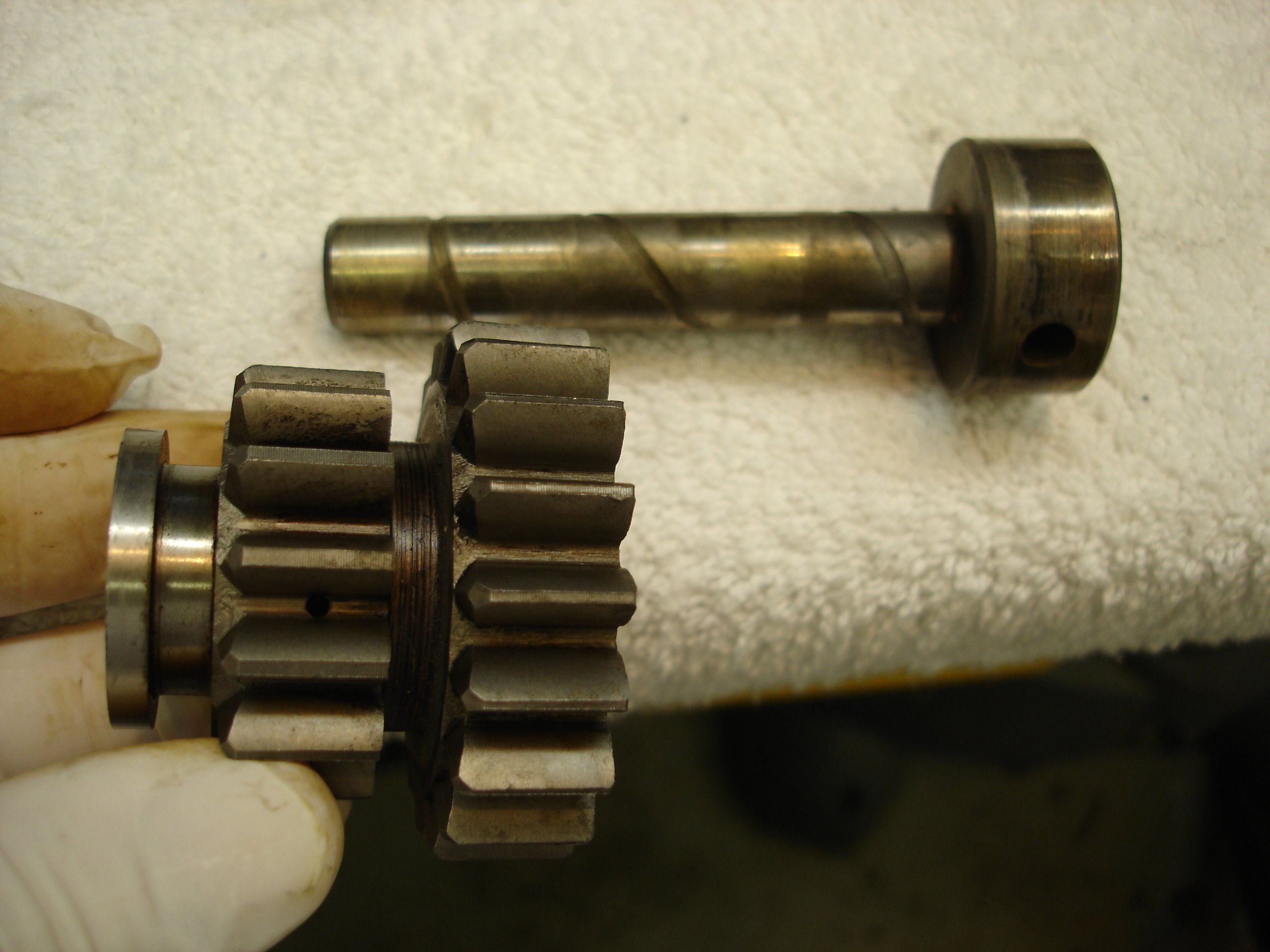 Another clue I thought of...I changed the tranny fluid 150 miles ago and there were no chips or metal in what came out. The noise didn’t come on gradually. It started after leaving one stop light and has been doing it ever since...just in the initial 1st gear acceleration. If I wind the car up to 20-25mph in first the noise is gone, usually by the time the clutch is full out. But the clutch doesn’t make any noise if I operate it with the tranny in neutral.
John

Offline
Since it only happens after a stop, could be brake related.
"Age considers; youth ventures." Rabindranth Tagore
1975 Spitfire

Offline
John,
I'll be following this with some interest as my Herald makes a similar noise but only occasionally. My guess is that mine is a u-joint (6 possibilities on the Herald) but that is quite unlikely in your case with the new drive train. At any rate, it will be interesting to see how this turns out.

From your description though, I'd have to second Geo's guess, the lay gear bearing failures I've had fit pretty closely to your symptoms. I'd certainly start by checking the tranny oil for metal.

And I guess I should really start pulling the driveshafts out of the Herald.

Offline
Sounds like something in the rear end to me? I lost 2 rear ends in my 55 TR-2 many years ago.

Offline
I am a resident idiot here - having never been inside a gearbox. But here are my questions / thoughts anyways:

Offline
I will go with driveshaft rubbing something for $1000, Alex.

Offline
I already have driveshaft rubbing muffler and I phrased it in the form of a question.
Bob

Offline
Some very good suggestions! I'm assembling a list of things to look at. Not to short the tranny guys, I'll check that eventually, but only after we've exhausted the easier things to check...but your diagnostics are in the hat! Here's the list so far:

1) I'll pull the wheels and drums to check the brakes to test Rohdyspit's brake idea.
2) I'll spin the drive shaft while on jacks to test Tom's U-joint theory.
3) I'll check closely for clearance around the drive shaft to test Bob's suggestion. (we'll have to have a runoff exam Between Tush and Bob if it turns out to be a non-muffler interference?!?)
4) I'll dial indicate the pinion and axles on the diff to see if Redoakboo is correct.
5) Try warming the engine with clutch in to see if that makes the noise start sooner to give clues to Popeye.
6). I’ll pull the clutch inspection plate to see if it has been rubbing on Steve’s suggestion.
7). Check engine and tranny mounts for failure/loose to test PeterK's possibility.

Geo, Marv, Don and BNW will have to wait patiently while I rule out the other items.

Steve will need to explain his thought in more depth, to see if it counts as a separate idea from Geo's diagnosis.

--No noise starting in second gear. If it does make noise in second it is always as the clutch comes off with a bit of a jerk.
--We don't have real hills here, but gentle slopes up and down driveways, say, do not seem to affect the noise...it occurs letting the clutch out going up or down.
--To clarify, the noise always stops by about 10mph while accelerating. It is about as loud as if a metal cover were dragging the ground, so loud enough to get the attention of pedestrians nearby or to hear over engine or wind noise. Even in 2/3/4th gears I have never heard it above about 15 mph.

Yes, as the participation grows so does the excitement! I'll run the above list this weekend to see where we stand!
Last edited: Jul 27, 2018
John

Offline
Had a similar problem in the Alfa. Only from a dead stop in first gear. Never did find out what it was but it has not reappeared - yet.

Offline
John, just to make sure, try to pull and push your rear end pinion flange In & Out. Just to make sure your ring and pinion didn't move. Sounds crazy but on a new build I have had that happen to my Healey after 100 miles or so. The shim and spacers can get cocked and then slip into place there-by causing clearance.
About TV Shows-
"...you really can't restore a car in 10 days. I don't want to watch a race where people have to restore it in a week. It's not going to drive, and those cars never work. In real life, it takes years to get it right. " Jay Leno.
S

Offline
Oh it is basically the same as Geo’s-- just that I have had that problem before on the shaft and it was the needle bearings on the ends of the shaft. I cannot remember if the bearing had too much play in the case or if they were scared with that galling. I have seen that tin inspection plate on the bellhousing come loose and make a weird sound also. Hopefully it is something easy like the tin piece.
S

Offline
To me the noise sounded like an old truck with a low granny gear and then once it got some speed it stopped. I think the shaft movement balanced it out. I wonder if you put some heaver oil in the tranny temporarily to see if that makes a difference.
OP

Offline
Vette, your on the same path as Redoakboo...but if it checks out you’ll deserve a runner-up prize for being much more specific!

Steve, i’ll Add an extra check for your clutch inspection plate. I did have to spend a good bit of time straightening the plate last year, so that’s possible.

I can’t rule out the countershaft/bearings...but I can say the box sure seems to operate great with no noise any other time...so I’ll save opening it up for a bit.
John