Offline
My trans is hard getting into gear from stop. While moving, shifting is OK. Clutch engagement seems OK, in the midrange of pedal travel.

No noises, just have to push hard on the lever, sometimes twice to get into first. Fluid level in reservoir is still topped up. Fluid either Valvoline gear oil or Red Line MT90, around 9 years old. No apparent leaks either slave cyl or trans itself.

When fully stopped does it help to put it in 2nd or 3rd first and then into 1st? That might indicate the clutch not fully releasing and once you stop the input shaft from turning, shifting is easier. Another way is, when you come to a stop, if you leave it in 2nd or 3rd or whatever until you are completely stopped and then go for 1st is it easier?

Conversely, when coming to a stop, how easy is it to put in 1st while still going 10-15 mph? If easy, would indicate 1st gear synchro is good.

If it's consistently hard under all the above conditions, it might suggest the shifter bushings inside the tranny are going bad - the only time I remember mine getting stiff to shift, the cup at the bottom of the lever and the larger bushing the large shift lever ball rides in were worn and fresh bushings made a huge difference.

Offline
Thanks, Dave - I'll check the specifics. Offhand I'd say #3 is the case.

Assume you're referring to the large socket the shift lever rotates in as well as the smaller snap-on nylon bushing that attaches to the small ball at the bottom of the shift lever.
Steve Gerow
Altadena, CA, USA
1959 AH BN6 2-seat roadster / 1974 TR6 Emerald Green
Check out my galleries:
http://www.pbase.com/stevegerow

Offline
Is this a matter of getting re-acquainted with your Healey after it's long hiatus? If not, then #3 shift rod ball bushing is likely root cause.
R

Offline
I've probably told this story here before but there are likely forum members who didn't read that. I bought my '60 BN7 in Virginia and drove it back to near Jacksonville, FL, struggling the whole drive trying to find the right gear. Worst drive of my life. Since the petro gauge wasn't accurate, I made a lot of unneeded stops along the interstates on the way. Accelerating back up to speed was the worst problem, going from 4th gear to 5th often got 3rd. Adding to the joy was that I didn't know how to operate the heater system, which was probably valved off, this in January. Once home I considered getting a new gear box, took the car to a foreign car specialist who charged me about $160 to install the small nylon boot on the bottom shift lever ball, and left the problem unsolved. Ultimately, I joined the Toyota truck owner's Web site, jumped over to the oft-referenced sites offering wares for rock-climbing vehicles--Toyota gear boxes are used on a lot of those vehicles--and learned that you could buy especially durable bushings that accept the larger ball on the shift lever. I examined my tranny and found there wasn't a trace of that piece. I went to the local Toyota dealership and paid $13.66 for part no. 33505-35020, described as seat sub-assy, SH 120-G, $12.76 before taxes. The result was a flawless gear box but possibly one from a pickup truck. I soon bought the 3.5 differential gears from SC Parts, had those professionally installed in a donor differential, and then watched/helped as the unit went into the car in a St. Johns Austin Healey Club tech session. I now enjoy perfect shifting, zero transmission noise, and five close ratio synched gears. Serendipity! For the record, I know nothing about these cars that Steve G doesn't already know.
Owner of a 1960 BN7 with Toyota 5 speed and a '92 Porsche 968 coupe. Former owner '62 Jaguar MK2, MG-TF brought back from military service in Italy 1958, '61 Healey BT7, pre-A Porsche 356, and a Porsche 944.

Offline
Gonzo,
Been driving it since last September. Seems like it's gotten harder to shift into gear when at a stop. Fine when moving. No weird sounds. 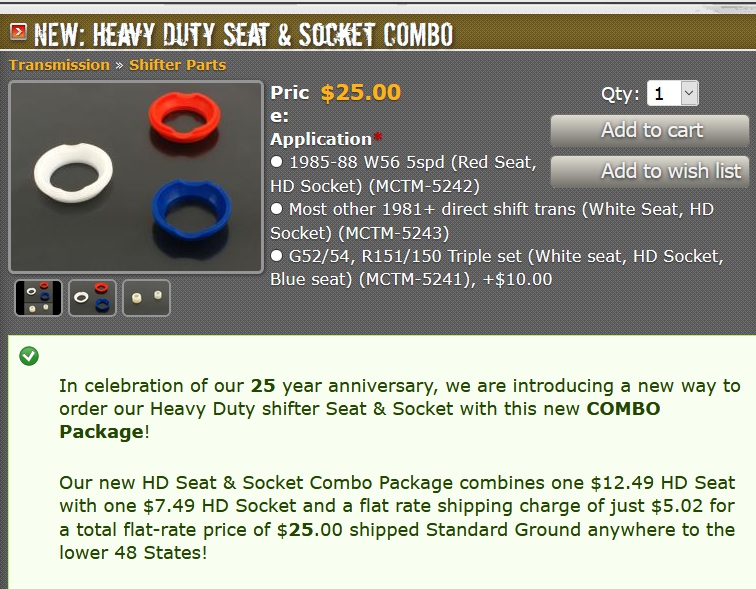 Offline
I'll consider that. Info about rock crawling trucks with Toyota boxes was what put me on to this answer. I can't imagine my car shifting any better than it does. Keep up your good work.
Owner of a 1960 BN7 with Toyota 5 speed and a '92 Porsche 968 coupe. Former owner '62 Jaguar MK2, MG-TF brought back from military service in Italy 1958, '61 Healey BT7, pre-A Porsche 356, and a Porsche 944.