Offline
Going to put new tires on my TR3A in the spring. Based on age of tires - not wear. Which tires does everyone prefer?

So far trying to decide between Michelin XZX and Vredestein Sprint. Both available online for about $122 each.

There's a great performance shop in the Cincinnati area that can properly mount, balance. true and align wire wheel and a TR3.

Offline
I had Michelin XZX on my TR3. Had to replace them due to age, not wear (they still looked brand new when I took them off). I now have Vredestein Sprints on the car. The Sprints seem to be a little softer and handle a little better than the XZX. Of course that could be due to the fact that the Michelins were over 30 years old when I did my seat-of-the-pants comparison.
Joe

Offline
I agree the Vredestein Sprints look the part and work well. 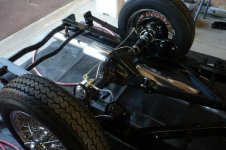 Offline
looks nice to me

Offline
The ‘59 TR3A that I am restoring I bought in 1985. It has been stored for 30 years in a dark area of my garage. I have it running now, but it has four Pirelli Cinturato P3, 165 R15 tires and a spare white wheel (no tire). The tire tread is like new and they hold pressure. I purchased a Michelin 165 R15 for the spare wheel, but it does not fit in the spare tire slot under the trunk. TR3 specifications are 145mm 15 inch tires. Will a 155 R15 fit in the spare compartment, or does the spare HAVE to be 145mm?

Offline
I have 165s fitted to 5.5" wire rims and they don't fit in the wheel well so I have a 155 fitted to a 48 spoke 4.4" rim that fits with room to spare. They say that all tires and rims should be the same size but if it's a spare and you only use it to get you out of trouble it's no different from the skinny tire in some modern vehicles. How you get the 165 home after changing it could be interesting,I have heard it will fit when it is flat?

Offline
Yes - the 165's will fit in the spare slot - but, only if no air in them. So, what's the use of buying and carrying a tire you can't use (unless you carry an air pump. Best solution is to make your spare the 145 in case you have a flat and actually need a spare for a short time (until you can get your 165 repaired or replaced).

Offline
I am using the Michelins. They are a repop of the tires my car originally came with. No problems with them so far...about 5 years...
John

Offline
Anyone mind sharing where I can find the Vredestin Sprints online for $122 please.
Prices I am seeing are around $135. Thank you for the help
Gil. NoCal

Offline
Gill, that thread was posted on Jan 10, 2021, prices would have gone up since then?

Offline
Thank you Graham..... I missed that!
Gil. NoCal

Offline
Any of you have an opinion or experience with how “old” tires fail? I have Pirelli Cinturato P3 tires on my 59 TR, which were new in 1987, driven for only two years, then the car was stored in the back, dark end of my garage for 30 years (I.e. no sun exposure). The treads are excellent and sidewalls look good. They hold air pressure. But I’m advised to replace them immediately. How will they fail: blow-out or just start losing air pressure? I haven’t experienced a tire blowout for ~50 years.

Offline
Donald... I would use the tires for rollers....around the shop.
Probably would drive on them at low speed in town to a tire shop.
Nothing else. Tire failure is the concern. Not worth the risk.
Just my opinion
Gil. NoCal

Offline
They will go hard and loose grip and flex.
if you are lucky that will be it.
unlucky and it will let go at the worst possible time.
I use vredestien sprint classic and really rate them especially in the wet
This is when they were new.
And it was seriously wet !!

Offline
I saw an old tire fail on a friend’s TR3. the tread came off and wrapped around the bracket in the rear wheel well. Bent up the fender. This was at city street speeds. No injuries, but $$ spent on body and paint work.
Tucson, Arizona

Offline
I had one old tire delaminate on a Corvette. It was shaking the car so bad I couldn't read my gages and I replaced it before it let go. Turns out that was fortunate, as a few years later, I had an old tire fail on an Oldsmobile at 70mph. The tire steel belt broke and turned into a steel whip that chewed up the entire front of the car. $5k damage...inner and outer fenders, windshield, most of the side trim. The olds tire had no warning until a couple seconds before it destroyed the car.

So, the answer to how an old tire fails is by delamination of the plies. How and which plies separate is random, but the possible damage makes it worth getting rid of tires after 10+ years, unless you never drive on a freeway.

"The rest of the story": I had just purchased the Olds, and it did not come with a jack to change tires. I, rather lame brained, took it on a road trip from Ft Worth to Atlanta and back. It was on the way back, about 200 miles out of Atlanta, and on the part of I20 through Alabama that doesn't have exits but every 10 miles, and gas stations about every 3rd exit. This was 20 years ago, when I20 was not nearly as busy as today, and no cell phones like today. You could go for 10 minutes between seeing a car. As usual, I was speeding at 70 in a 60mph, and a gentleman in a Beemer was tailgating to keep from getting a ticket. The tire blew with an explosive "bang", with shrapnel flying all over. The windshield cracked from the blast as the steel tire belt beat the car to shreds. I pulled over...and the Beemer driver passed and pulled over about 100 feet ahead. I was excited, as I did not have a jack and I thought he stopped to help. Nope. He got out and walked around his own car to see if there was any damage...while I was walking to ask to borrow his jack. He finished the walk around as I got about halfway to his car...turned to me, flipped me off , jumped in and pealed out down the freeway.

I had to "limp on down the highway on the rim", to quote the song. "I reached a station down the road a ways", about 2 hours later, borrowed a jack, and finished the road trip at 50mph without further incident.
Last edited: Jan 14, 2022
John

Offline
I replaced mine with the Vredestein Sprint Classic in March 2014. 165HR15. Tire Rack has them today for $136 apiece. I paid $119 eight years ago so, not bad. Love the tires. What shocked me when I got them was the tread wear rating UTQG is 220. That's like a sticky racing tire. Most all season tires today come with UTQG in the 700 range.

These are probably gonna age out soon. Will do the same again