I live in france and I have one Healey 3000 MK2 from 10 month
I need to change the dashboard because the previous owner had cut it to place a radio!

For that i need to remove "oil / temperature gauge"and remove the sensor located on the engine.

It's my problem and I have two questions

1: Have you one or more trick to remove this nut !
2: The sensor it's in contact with a water directly or in the cavity in the cylinder head?


Many thanks in advance 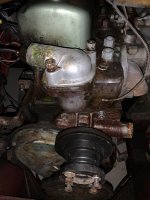 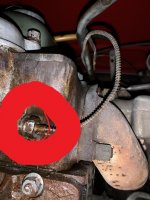 Offline
I found that, anybody tested?

Offline
I have no AH specific experience. However, I have made similar tools from sockets to the one shown in Peter Carbone's thread.

Offline
I 'made' a tool for this by cutting a slot in an appropriate-sized--guess it's a 13/16"--closed end wrench. However, not wanting to sacrifice a good tool I used a Harbor Freight--do they have those in France?--'cheapie' and, as mentioned in the link, it eventually spread apart.

Be sure to soak the nut in a good penetrating oil for a couple days if you can and maybe apply heat from a heat gun. I wouldn't use a propane torch, the temp gauge system is filled with ether, the capillary tube is fragile and overall it's very easy to break it.
OP
R

Offline
Many thanks for your precious advices

I totally agree with Bob on the use of rust penetrant being used prior to trying to loosen the sensor. Additionally, be very carful that you do not deform or break the copper capillary to attached to the sensor as it is extremely difficult to repair. Keep in mind that you are diminishing the inherent strength of the sock by cutting the slot and I have used a hose clamp around the lower end to help strengthen the socket when in the process of breaking the sensor loose.

I still have the socket along with other tools I modified to address specific Healey needs.


And for my second question?
In fact I search if I need a seal between this bulb and the water or this bulb is encapsulated in the cavity?

Most of you have probably heard this story, but my dad--as usual--thought he could repair the sender for our BN2 during restoration. So, he bought some ether, poured it into the bulb and tried to solder it all back together. Not too surprisingly, the ether did what it will under those conditions and ignited, launching the bulb across the shop (it's roughly the size and shape of a 50-caliber bullet). He's lucky he didn't lose a proverbial eye; we sent the gauge and bulb to MoMa.

Offline
You can make a DIY repair of mechanical temperature gauges IF the dead gauge (when cold at rest) has its needle against the lower stop pin. Follow the steps in the link below. I substitute dry ice for the salt/ice bath to chill the donor bulb. It's cleaner and colder. To date I've probably fixed about 6 mechanical temp gauges. I don't use open flames for soldering so there have been no 50-Cal projectiles in my garage!

MOSS printed an article within the last year or so explaining a different way to repair the mechanical temperature gauges. I would NOT use their method. Their method is just too dangerous when compared to the method outlined in the link below.

Offline
I don't believe my father would use a torch to seal a tube full of ether--he wasn't stupid--nor did I say as much (there are other ways to solder). He tried to reattach the bulb at the end of the capillary tube, or he might have pierced a hole in the bulb--the ether was gone when he attempted the repair--and tried to seal the hole with solder using a soldering gun (a pencil wouldn't be hot enough). This would have been difficult with the bulb in ice (but it is a good idea to use ice to cool the ether).

He did subscribe to Skinned Knuckles for many years; I might have a stack of them somewhere.

Offline
A suggestion on how to remove your temperature sensor by making a home-made socket in conjunction with a hose clamp...(I do NOT advise using flame in attempts of removal unless you know what you are doing).

When I made my modified socket, I provided "doubled" the opening clearance (2X, at least), so that as one starts to loosen the hex nut from the probe, one can do so one edge of the nut at a time. In other words, loosening the nut means having to also loosen the hose clamp after each fraction of a turn of the socket to avoid shearing or damaging of the sensor coil. Same goes for reinstalling, of course.
PS.- I also recommend easing all edges of the modified socket to avoid potential cutting of the coil upon removal/reinstallation.

With respect to the Temperature Sensor Probe and if visible from my photo, I also have written the note (at right of 'Temperature Sensor At Probe') on how it is important to pull back on the coil just enough as required to avoid any unnecessary entanglement or snagging, (as was in my case, anyway). Your case may not be the same as mine was. In any event, I've learned patience when it came to removing in its entirety as well as reinstalling. 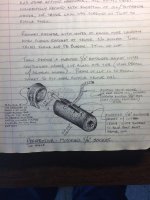 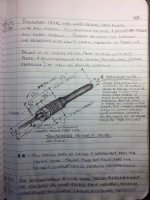 Offline
Bob, I wasn't trying to insult you or your father. I apologize if it seemed that way.

As I am sure you read, the method of repair in the link I posted involves splicing the capillary tube. That is obviously much easier to achieve than soldering at/to the expansion bulb or the gauge. The amount of heat applied and the length of time the heat is applied is low and short respectively.

I located an updated copy of MOSS's article on mechanical temperature gauge repair and have provided a link to it below for those who care to read over their method.

Offline
Guess I should have added a disclaimer to my post:

NOTE: This statement in no way recommends the use of a blowtorch, propane torch, oxy-acetylene torch or flamethrower to (mildly and carefully) warm a fragile brass bulb full of a highly volatile and flammable organic compound so that a penetrant oil may more effectively do the job for which it was intended.


Welcome to The Forum, Eric!

dklawson said:
Bob, I wasn't trying to insult you or your father. I apologize if it seemed that way.
...
Click to expand...

No problemo. Dad was a patient and meticulous mechanic, but he'd be the first to admit he 'screwed the pooch' many times. I didn't see him do this, but he told the story in such a matter-of-fact way it was pretty funny.


Thanks you very much for your advices 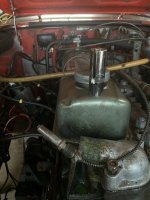 Offline
Congrats. How'd you do it?
OP
R


Thanks you very much for your advices

Just as another piece of advice and for whatever its worth (from my experience)...As I removed my entire sending unit assembly from the car (and put it back in, for that matter), I was very ginger and subtle in straightening the entire length of the coiled portion and only as necessary as I was passing it through the firewall and out the dash.

I found it is just one of those components that doesn't really like to be "changed" in life once it is set. I also had to keep in mind it had to go back in and be reshaped again.

I remember something of a lolly pop candy commercial once..."How many bends does it take to break the center of a Sensor Probe (and go "POP?")". "It's a world I don't really want to know."