Offline
I started up a aTR4A that had been sitting for 10 years. Updated the ignition system and ran gas from a container....checked the compression and it was good.It started up OK. I had to have the choke pulled all the way to keep it idling and there was black smoke coming from the tailpipe. Not sure if the smoke was just from sitting so long or because of the choke being on. I'm an SU guy so not familiar with Strombergs. Is there anything I can do to set them up so I can have a decent idle ie. replace the diaphragm ,adjust the mixture? This car has frame issues so I'm going to sell it in the Spring and put the money towards my TR3. I don't want to get kits to rebuild the carbs...that's for the new owner, just want get it to run half decent. Is there one major issue with the Strombergs that I should be addressing?

Online
Two things I'd be looking at would be needle valves ( especially with the car sitting for 10 years) and diaphragms. Did you put oil in the dashpots? Air valves not sticking/rising and falling etc? Chokes operating correctly and returning closed when the cable is operated?

I'm sure PB will jump in here as he is the ZS Expert in my mind.

Offline
The non-emission ZS carbs really aren't that different than SU carbs. All the principles are the same, except for the diaphragm replaces the precision fit between the piston and dome.

Pulling the choke way out does two things : opens the throttle and richens the mixture. First thing I would do is try holding the throttle open and letting off the choke. If it won't run without the mixture being so rich it blows smoke, then there is something else wrong (weak ignition, bad timing, stuck valves, etc). But if it smooths out and runs OK, then just cranking down the idle adjustment screws might be all that is needed.
Randall
56 TR3 TS13571L once and future daily driver
71 Stag LE1473L waiting engine rebuild
71-72-73 Stag LE2013LBW waiting OD gearbox rebuild

Offline
In addition to the above, remember the car sat for 10 years.

Assume the float valves, jets & emulsion tubes are all gummed up. As a minimum plan on the following.

Offline
Since you're just trying to get this running for resale - you might check the diaphragms rather that immediately replacing. Hold them up to a strong light and tug on the edges to open the folds - tears & leaks will be apparent with light shining thru. If they are solid the presumably they are not the cause of your problem.

With the floats out hold them near your ear and give them a shake to hear of there is fuel inside. Very common problem. The replacements are unsinkable Nitrophyl.

O-rings are super easy to replace but you didn't say the carbs are leaking so they may still be okay (for your purposes).

dklawson said:
...Buy and install new diaphragms. That requires jet centering just like on an SU...
Click to expand...

I did not realize that diaphragm replacement would require jet centering - I must have fallen asleep in class that day!

Offline
Of course my advice would be to rebuild and properly adjust the carbs, but at least do the basic stuff Tush suggested..Float chamber needle valves and diaphragms; next to futile and useless (mal)adjustments, those would be the 2 most likely suspects in my mind.
Last edited: Aug 30, 2016
Ken @
kencorsaw "at" aol.com
DRIVE 'EM IF YOU GOT 'EM

Geo Hahn said:
I did not realize that diaphragm replacement would require jet centering - I must have fallen asleep in class that day!
Click to expand...

I am referring to the pre-emissions CD carbs, not the CD2. On the early ZS carbs the jet adjusts from below instead of adjusting the needle through the dashpot oil as on later cars. The early CD carbs have a jet that mounts in a jet bushing just like SU HS series carbs.

As for the floats, there are no modern floats available for the early ZS CD carbs used on my GT6. Hopefully the TR4 floats are available. They are not the same shape as the ones used on the later CD2 carbs. 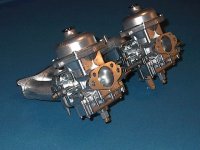 Offline
Yes, Nitrophyl floats are available for the TR4 175CD carbs. I centered the jets when I rebuilt the carbs - I just didn't know/never heard that if one replaces the diaphragm it would need to be done again.

The needles on my car with CD-2 carbs are spring-loaded and have pressed-in jets. Not ideal for other reasons but jet centering is not needed (or even possible).

Offline
The spring biased needles were also used on later SU carbs. On my cars the SUs and Strombergs both require jet centering during a rebuild.

You are correct that you won't have to center the Stromberg jets if all you do is replace the diaphragms. However, I was also encouraging Karl (the OP) to remove all the jet assembly parts and clean them thoroughly to remove the gum and varnish that will have developed during 10 years of sitting. Once you remove those parts for cleaning you do have to re-center the jets. My apologies for confusing things in my earlier response.

Footnote to the above. When my wife and I picked up our GT6 from her father it had been sitting for 10 years. The last driver had been her brother who didn't know anything about cars. He determined that something was wrong with the carbs so he "shimmed" the vacuum chambers of the carbs using thin washers until he got the carb pistons where they would move freely. Not surprisingly, the engine did not run well when we got the car.
Doug L.
'64 Morris Mini Cooper-S 1275
'67 Triumph GT6 Mk1
OP
K

Offline
What "type" of Strombergs would likely be on a 66 TR4A. I've never really taken a close look at mine.

Offline
As Poolboy said, the TR4A carbs should be designated as 175CD. They will have the jet adjuster nuts on the bottom as can be seen in the picture I posted earlier.

The 175 series carbs used on other cars a few years later will not have the jet adjusting parts on the bottom. They are known as 175CDSE carbs.
Doug L.
'64 Morris Mini Cooper-S 1275
'67 Triumph GT6 Mk1
Similar threads