Offline
Some years ago I replaced Healy starter with the Japanese 1.2hp from British Starters, a true revelations as noted by other posters. Same with Super 7. So I decided to do same with '67 Eye Type 4.2 Rdstr. However, having crossed 70 a few years ago I now limit my work to stuff that does not require standing on head and bending arm around back. So I took it to local Etype expert who gave me great verbal confidence and a $200 estimate. $375 later it was in and worked just fine for about a year and then I heard metal clanging noise that evoked fears of engine rebuild. On second try starter just whirred freely. On examination the main part of motor had separated a millimeter or two from mounting base. Also noticed that upper mounting bolt nut was a about 2 mm from being flush against mounting "bezel".
Took pics and sent to British Starters, they surmised the motor part tried to take up gap over time and tore out threads on bolt holding starter together. Said they would send new one. So the fun began. Of the ten hours it took 2/3 spent working on inaccessible nuts.
One main problem is that tnut on the upper bolt will manage to rotate only scraping against surroundings, that why the gap, so mechanic probably gave up deciding it was tight enough. See below on how extricated with screwdriver help.
So I decided to put replacement in using an allen bolt, stainless steel from ace Hardware of same size but course instead of fine thread. It took about 10 hours of hard work, mostly on variety of inaccessible bolts.. Without forum advice (see below) I would have abandoned.
1, Take rear carb and vacuum system tank off to get fullest exposure
2. In passenger footwell on most forward aspect of transmission tunnel, up where it meets footwell, remove carpet, padding etc, you will find about a 6" height oval metal plate held in with six screws and heavily caulked, hard to notice if not looking hard. It is not like the big rubber plugs. I missed it on first shot, once removed the head of the lower starting bolt is right there. Since working alone, I put on a small vice grip and turned the easily accessible nut with ratchet from under or over car. Vice Grip limited in rotation so it holds bolt fixed works.
3. Put allen bolt in either way, I used washer both regular and lock on both ends, shortens so makes for less bolt turning. If you are lucky you can hand turn blolt head to get everything with little gaps. Then you will not be able to get a wrench on the nut. When working on allen end, Unless you cut it down to 1-1 1/2 inch legs you can not get on head. I used the small vice grip with most forward apsect clamped on head. It can be turned about a 1/3 turn at a time. I believe a sort of needle nose vice grip is available, would recommend. If the nut is tight between starting motor and engine it will turn with bolt head so pointless. Its flat apexes touching start motor and engine. So I got a very large screwdriver, with a lot of pressure jammed it in between engine and motor case so when I put vice grip on allen head and made my 1/4 turn, the nut did not turn but bolt moved alone.
4, Getting carb and airhorn to air filter thing off I ground down the hips on open end wrench so it looked like a fork with two stubby tines. Also one of the flexible ratchet shaft tools, found in Ace cheapy box, made this a lot easier.
5, It all worked eventually, forgot about solenoid wire on first try. Phew, a 3 day battle. Fantasy was when the guy responsible for design dies he will spend his time in **** removing and replacing starting motors, no lift, no power tools.

Offline
Sounds like the kind of job you'll only ever want to do once. Glad you were successful, at any rate.
My Blog
My Facebook Page
D

Guest
Offline
I read this, and remembered doing this on my Jag (stock starting motor). Top bolt won't easily clear the starting motor housing, Comes in from the rear. Remove console, transmission cover, 30" extension and a wobbly, if I recall.
M

Offline
I remember the first time I changed mine, took me an hour or so to figure out going from the passenger side cockpit. The shop manual assume you already know stuff like that and just outlines steps. Thought for awhile I'd have to shift the engine forward...

TOC said:
I read this, and remembered doing this on my Jag (stock starting motor). Top bolt won't easily clear the starting motor housing, Comes in from the rear...
Click to expand...

I used socket head cap screws for those rear-entry bolts -- should be a lot easier to get a hold of them with an Allen wrench on a ratchet extension.

I also made some slots in the tip of those bolts to give me the option of twiddling them from the front once they were loose. 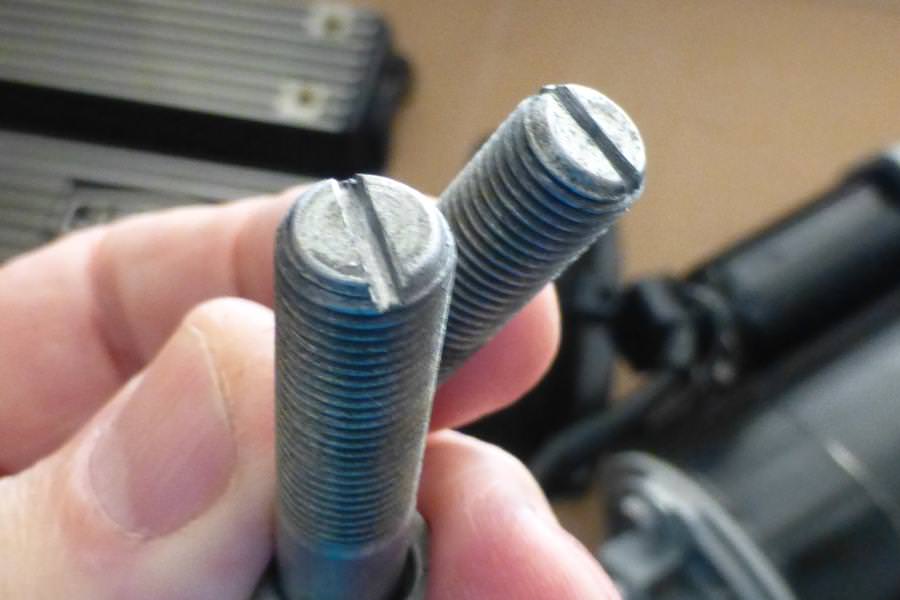 I stayed with the stock starter and had it rebuilt while the engine was out so maybe all this forethought was unnecessary.