Offline
How do I determine if I have a starter or solenoid problem?

Most of the time - the car starts perfectly. Sometimes, only a click when I push the starter button. After repeated button pushing - the car's starter will engage and the car starts fine.

Obviously - a solenoid is a lot cheaper and easier to install than a starter - just not sure how to determine which item needs replacing.

Also - if it is the starter - am I better off buying a new starter - or, taking it to a shop and have the current starter rebuilt?

Offline
The 'click' would suggest that the solenoid is most likely working fine & the problem lies elsewhere... but not necessarily the starter.

I would check that the big cable connections are all clean and tight - especially the one on the end of the starter which is in an area subject to heat, oil and other abuses.

I have rebuilt my own starters from time to time - not much of a mystery if they just need cleaning, insulation repair, bushings, etc. I have also used a local rebuilder, quite thorough ans reasonable though some (also local) try to cut corners or worse.

I have never gone the route of the hi-torque starters, just never saw the need.
OP
S

Offline
Thanks for the suggestions. Will go out to the garage tomorrow and remove, clean and reattach all of the connections.

Offline
Not a great idea, IMO. Those solenoid studs (on a TR3) are kind of fragile (mostly copper), and a screwdriver tends to make only point contact. Very apt to damage the studs and the screwdriver. It's even possible for the screwdriver to weld itself to the studs, and you'll have to break the weld to get it off!

Instead, connect a 12v test light from the output stud to a good ground, and watch the light when you try to crank the engine. If it doesn't come on or lights very dimly, bad solenoid.

The early (pre-50K) starter has an odd failure mode that is especially common if your engine has been modified with more displacement or more compression ratio (or both). It uses a bonded rubber drive to carry the torque from the starting motor to the pinion gear, and the bonded rubber tends to fail if your engine needs a little extra oomph to turn (due to the increase in CR or CI). Long time ago, BFE made a bunch of "fail safe" drives, but even one of those failed for me and the others are long gone. So the only solution I know of is to go to one of the gear-drive starters.

They also eliminate a problem that I've always found annoying: the original starter uses a Bendix drive that kicks the starter out of engagement the first time the engine fires. That's great if the engine starts when the first cylinder fires, but in cold weather (or if the choke isn't set right), it often won't start at the very first firing. That leaves you with the starter motor spinning uselessly, until you let off the button and wait for the starter motor to come to a stop.

But the gear drive starter uses an over-running clutch instead, that will continue to drive the main engine as long as it's turning slower than the starter motor.

Online
I've had many cars through the years that jumping the solenoid with a screwdriver is the only way to start them. It works for me!
John

Offline
Yeh I have never found good fool proof way to test solenoids. You might try a hand held starter switch. In addition, I would loosen the battery, so you can yank the cable off if you start pushing the button on the back for testing because sometimes they stick in the on position.

I have about 6 originals that do not work. Most simply do not work. I do have one that is a part time worker and clicks and if I keep hitting the button will work. I save them because one day I want to figure out a way to fix them. John probably does not remember, but he posted once how the inner copper large washer should be self-cleaning after it slams into what it is hitting which I think is another large washer and that sounds correct.

I did cut one in half and it was an oxidized mess inside and I have one that the pot metal case allows about 3/16 movement and that still works. Geo had a Jaguar article I think that talked a little about fixing them.

There was a problem with the replacement tr3 solenoids, but maybe it is resolved. People were purchasing tr4 solenoids instead.

sp53 said:
There was a problem with the replacement tr3 solenoids, but maybe it is resolved. People were purchasing tr4 solenoids instead.
Click to expand...

I was one of those that had problems with a replacement solenoid. It would often stay engaged when you hit the starter button. I just went up to the local parts store and bought a Ford solenoid for about $10. No push button, but with a small jumper wire with an alligator clip it's very easy to start when under the hood. No, my car is so far from stock that parts like this don't matter to me. I just want them to work.
Art
'58 TR3A TS236xxL
'92 Mazda Miata -- Supercharged
'07 Mazda RX-8
'11 Mazda CX-7

Offline
Mine did that the other day at a friends house. I knew that the battery was old, but just a click when I went to leave, and wouldn't spin. Tried a jump start and the solenoid to started wire got hot and started to smoke the insulation.

Found trouble was the stud out of the starter was not tight and neither was the cable from the solenoid. Bad connection as well as a battery from 2003. Made it home after a quick tighten up and now have a new a group 27 battery and fixed/tightened both stud and cable and Bazinga!
PeterK
1958 TR3A 1966 TR4A both HVDA
S

Offline
Yes Art I had the auto parts guy tell me that same story. Art you having a lot of experience in the automotive professional field? Can you explain a sort version to me on why people sometimes add a second solenoid like the simple ones found on Fords to a staring system to aid in starting the car?
steve

sp53 said:
Yes Art I had the auto parts guy tell me that same story. Art you having a lot of experience in the automotive professional field? Can you explain a sort version to me on why people sometimes add a second solenoid like the simple ones found on Fords to a staring system to aid in starting the car?
steve
Click to expand...

I'm not using the Ford solenoid as an aid, but rather as a replacement for the Lucas unit. Here's a picture, and as you can see it is constructed similar to the OE unit and it works the same way. 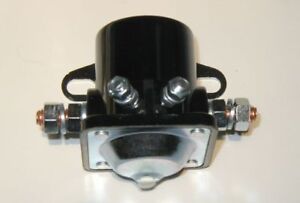 Offline
Sorry Art it is kinda off topic. I see the second solenoid used on old VW and many older BMW and Saabs. I guess it provides a quick/shorter path to the starter or something rather than using the solenoid that is on the starter, but when I ask about it, people that use that system do not give a worthy answer.

Online
If the starter on those vehicles was an inertia starter, there would have been remote or at least a detached starter solenoid.
Ken @
kencorsaw "at" aol.com
DRIVE 'EM IF YOU GOT 'EM

Offline
Chrysler products used to use two solenoids. I don't know why for sure, but one reason could be that the solenoid on the starter (which also engaged the gear) drew a lot of current. By using a second smaller solenoid, the ignition and safety interlock switches didn't have to handle all that current.

Just like the relay on an A type OD