Offline
i recently acquired a mid 59 TR3a. the engine spins nicely without plugs https://www.youtube.com/watch?v=JohmGGe7HSo (note this is done via the starter motor; it is not running)

but when i install the plugs it hardly turns at all. i'm thinking the problem is the starter motor? i'm planning on taking it down to the starter repair place on Monday (1/21/19)

here's an interesting question: although Moss says the later starter began with TS 50,000, this car is TS 525XX and has the early starter (see my pics).

anyone know how to put either of those in?

Offline
Can't comment on the state of your starter motor but it sounds like you have an early engine fitted - have a look at the engine plate and let us know'.
The two starter motors are not interchangeable as one throws out anf t'other in and if memory seves me the number of teeth on the pinion differs as does the ring wheel on the fly wheel.
BUT I have seen gearboxes with sizeable cutouts that enabled interchangeabilty after a lot of fiddling about, but I can't remember which way!

Offline
Yeah, even your video seems slow to me; for cranking with a stock starter and the plugs out. But I'd make sure the battery and cables are in good shape first. Ideally, check how much voltage is actually getting to the starter while it's cranking.

Check the flywheel to see which starter you need. After all these years, it's not uncommon to find that things have been changed around. It's also possible that someone has installed the early starter against a later flywheel; that combination will sometimes work (for awhile).

To use the later style starter though, you must have the later flywheel to go with it and also the later gearbox. With the starter removed, look to see if the ring gear is held on with bolts or not. The later ring gear is bolted on, and you can see the ends of the bolts in addition to the clutch bolts. The earlier ring gear is pressed onto the flywheel.

Sorry I don't have a better photo handy, but maybe you can make out the difference here. The gearbox on the left has the larger bulge for the later starter drive; while the center one doesn't. 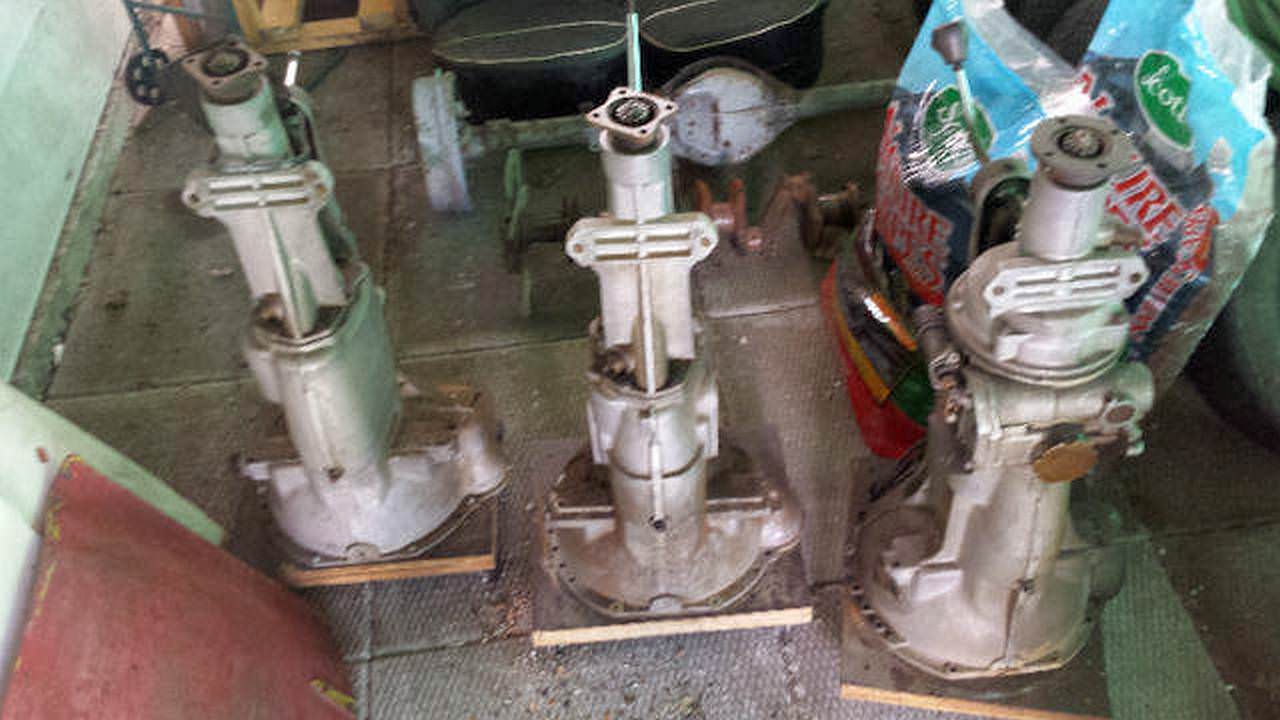 (Gearbox on the left is actually a much later 4 synchro box, probably from a TR4, so ignore the other bulges and differences).

PS, when checking starter cables, be sure to check for the jumper at the LH motor mount. It carries starter current from the engine block to the frame. Also worth looking at the joint between the ground cable from the battery and the firewall. If it has paint or rust in there, it may not be making good contact. With the starter trying to draw upwards of 250 amps, those connections have to be in top condition!
Last edited: Jan 20, 2019
Randall
56 TR3 TS13571L once and future daily driver
71 Stag LE1473L waiting engine rebuild
71-72-73 Stag LE2013LBW waiting OD gearbox rebuild

Offline
These starters are practically indestructible. I would check your connections, solenoid, and battery before going to the trouble of pulling the starter. Realize connections also include battery to body and frame to engine.
John

James Christie said:
...The two starter motors are not interchangeable as one throws out anf t'other in and if memory seves me the number of teeth on the pinion differs as does the ring wheel on the fly wheel...
Click to expand...

Well, they're not supposed to be interchangeable, but...

My pre-50000 car has a post-50000 engine with a bolted ring gear. Apparently a PO swapped engines but not the gearbox so he had to keep the early starter.

I am not recommending this approach - but I have driven the car for 39 years like that.
OP
S

Offline
its the right engine. the ring gear is bolted in. the engine # is 52407. but you folks have probably identified the problem. the wiring on this car is gone; it had a fire right around the fuse box. i ran a wire from positive to the coil, then i was using a starter switch to start it, so its just a relatively small cable going from the starter to the push button to the battery. i'll have the starter checked tomorrow (I will be a block away from the starter place). then i'll bolt it back in and try a much heavier cable.
OP
S

Offline
i took the starter down to the repair place today, and they said it had some issues. its done, and i'm picking it up in the morning. plus i am getting the proper solenoid and will be using nice heavy gage wire. Saturday i hope to have this thing running!!!!
Similar threads