Offline
Went into my garage today and found the ramp on one side of the lift sticky and shiny with some clearish looking something. Then I saw it. A Rustoleum inverted marking can, for laying out lines on grass fields etc. high visibility pink that blew out out it's can. Was on a shelf for a year or so about 5 feet off the ground. So what was on the lift. My 3A. $hit. If the lift was up, there would have been no damage done.

I got right to work. It covered the driver side apron, nearly the entire hood, mirror, front fender, bumper, cowl some. 1st tried 3M adhesive remover that also removes bugs and tar to pick off the clearing solvent. It dissolved most of the spray (it apparently just happened before I discovered it), I had to pick the pink specks off, some remain, more that I haven't yet found. Then I washed it off with a wet sock and used the 3M again. Then I used some 3M swirl remover. Getting there but the paint has clouded a bit so next I'm going try my Porter Cable polisher next. It's not a trailer queen but a nice 3.

Throw away your old paint. I walked past that can every day and should have reached out and trashed it. Most of the pink leached out around the bottom of the can and did not get sprayed, thankfully. I'd rather be driving.
PeterK
1958 TR3A 1966 TR4A both HVDA
OP

Offline
Got it done. Looks so good that the rest of the car now looks neglected.
PeterK
1958 TR3A 1966 TR4A both HVDA

Offline
What a freak deal!?!

If your finish is urethane, then you can go right to laquer thinner. The urethane is inert to it, but all spray bombs are not. Of course, if your finish is old laquer or enamel, then don't use thinner!!
John

Offline
Your post timely... just yesterday I started pulling old cans of spray paint off the shelf in my shop in an effort to clean it up. So glad you got the pink off your car. I'm sure it was a lot of work but it had to be done.
Elliot
Central PA
1973 TR6 Damson Plum / Biscuit interior, HVDA 5-speed, Good Parts Hubs
1976 TR6 White/Biscuit interior SOLD
Nostalgia isn't what it used to be.
OP

Offline
I really can't believe it all came off and looks better since it just had a nice hand polish.
PeterK
1958 TR3A 1966 TR4A both HVDA
K

Offline
Thanks for your post PeterK. I never would have expected that . I just packed my spray cans into a sturdy plastic box with a lid. so glad your car was not permanently marred.
TS166
TS2619
TS80648
TS80709

kjman55 said:
Thanks for your post PeterK. I never would have expected that . I just packed my spray cans into a sturdy plastic box with a lid. so glad your car was not permanently marred.
Click to expand... 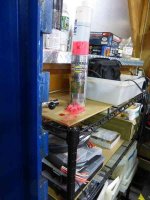 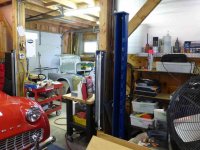 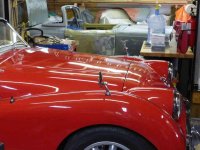 Could have been a lot worse if I hadn't noticed right after it happened.
PeterK
1958 TR3A 1966 TR4A both HVDA
Similar threads