Online
How many errors can you spot in this eBay description?

[FONT=&quot]Available for purchase is a dealer prepared 1956 Austin Healey 100M, chassis number BN2L230263, engine number 1B230263, showcasing a beautiful restoration and M-Conversion by the marque specialist at Ragtops and Roadsters of Sellersville, Pennsylvania.

Offline
Hi Rick, I'm certainly no expert on anything Healey except what I may have wrenched on with my own grubby little fingers, but even in my naivete' the discription begs a few questions.
1. If it is not one of the original 640 is it not then really an "M".
2. If Ragtops & Roadsters did the conversion along with the restoration, how then could it be a dealer installed conversion especially since it is stated that the dealer was in Paris.
3. From what i have read, it seems that a true "M" has internal engine modifications that the "Dealer's" conversions did not
have. So it cannot be advertised as a "M".
Just saying, but then what do I know? Dave.
About TV Shows-
"...you really can't restore a car in 10 days. I don't want to watch a race where people have to restore it in a week. It's not going to drive, and those cars never work. In real life, it takes years to get it right. " Jay Leno.
OP

Online
You got 'em, Dave. At least when someone drops a 396 into a 6 cyl Chevelle and puts some SS396 badges on it they usually have the decency to call it a "clone" or a "tribute".
Rick
"Madman in a death machine" My Nasty Boy Build: > BritishV8 Forum: "The Exploder" - HealeyRick's Austin-Healey BJ7 w/ Ford 5.0 <

Offline
To be fair, it is clear that this is not a Factory M. Particularly in the last paragraphs. Looking on E bay there are a surprisingly good number of 100's in various stages of M-ness for sale. I agree that there is nothing at all to support that this car had the M bits added by a dealer in the past.

Heres another one
"If it aint broke ....dont fix it "
" Thats not an oil leak ..........its a special automatic British rustproofing system "
Best Healey in show ABCD Ottawa 2013
Best Healey in Show Boot n Bonnet Kingston 2013

I stopped reading right there.

Offline
Apparently it is "close enough" to warrant entry in the 100-M Registry.
John, BN4

Offline
The Registry recognizes both authentic 100Ms and owner- and dealer-modified cars, but the latter aren't designated '100Ms' (bold font by me):

"The following information explains how cars are registered and the two types of cars out there : A. Le Mans Conversion (or modified) 100 models. Many stock 100 cars have been modified to Le Mans specification by owners or dealers over the years. These cars can look like the Factory-Built 100M car. They are called modified or "converted to Le Mans specification", they are NOT called 100M cars."

Pretty clear in my mind. The first car was represented as a '100M' in the title of the web page, the second was correctly identified as a 'Le Mans.' Is the former a misunderstanding, misrepresentation, or plain fraud? There can be a 100% or more difference in the selling price. I gotta believe there's been some legal proceedings where a naive buyer thought he was getting an 'M' car that came from the factory, but found out otherwise later.

Offline
Thanks for the clarification, Bob. A check of the registry website, https://www.100mregistry.com/articles.html, notes how to tell the different registrations.
John, BN4

Offline
Available for purchase is a dealer prepared 1956 Austin Healey 100M, chassis number BN2L230263, engine number 1B230263, showcasing a beautiful restoration and M-Conversion by the marque specialist at Ragtops and Roadsters of Sellersville, Pennsylvania.

Mistakes in that sentence alone that I can find are:

1. BN2's were "Austin-Healeys", not "Austin Healeys", so there should be a hyphen between "Austin" and "Healey".
2. Dealers did not "prepare" 100M's--the factory made them.
3. The engine number plate should read "1M------" whether or not it is an M. "1B" was used only on 100S's.
4. M's are not "conversions" but rather were original creations--Le Mans cars are conversions, whether done by the dealer, the owner or even, apparently, the factory.
5. Ragtops and Roadsters also work on cars other than Healeys so the term "specialist" is an exaggeration if not a misnomer. Also, according to its website the company is located in Perkasie, PA, not Sellersville.

If you're asking about mistakes in the entire Ebay ad there are plenty. In addition to repetitions of the above errors the continued reference to "100-4" cars is wrong--There never was such an animal.

Offline
I recall being told by Bill Meade--the owner/curator of the Registry (I say owner because he does make money off the site*)--of a fraud perpetrated by a 'restorer:'

This 'restorer' had purchased certificates from BMIHT by submitting a series of possible chassis numbers for 1956 100s. Since the majority of 1956 A-H 100s were factory 100Ms, he 'scored' on several. He then proceeded to build several counterfeit Ms and, of course, he had the certs to 'prove' it to potential buyers (I presume the BMIHT will sell a cert to anyone who provides a chassis number and the $$$). Some of the buyers submitted their cars' info to the registry, and Bill quickly determined that something was fishy. According to Bill, the counterfeiter was actually prosecuted for fraud and, IIRC, did some time and, presumably, had to make monetary remunerations to the defrauded--and probably very disappointed--owners.

That's why these borderline fraudulent eBay and BaT auctions tick me off so much; they advertise a '100M,' and only mention, buried in the details, that the car actually had the M bits fitted somewhere, at sometime (well, that, and I am protecting my investment in an authentic M). I wonder how the guy who bought the 'M' on BaT is going to feel when a knowledgeable Healey owner informs him what he has. It indirectly, at least, reflects badly on the Healey community, even though we're not responsible for the fraud. I just read an article in one of the flying magazines I subscribe to about similar frauds in the airplane sales arena, where the possible negative consequences can be more severe than buying an illegitimate automobile.

I get bragging rights for owning a factory M, but I think I could have just as much fun with a clean BN2 that has had some 'go fast' bits fitted from DWR and others and, supposedly, you can even build a faster/better car that way. But, man, people do dig the louvers and leather strap.

* Bill sells a painting pattern for the graceful curve of the cove color where it curls into the front wheel well. Although my car was already in the Registry as an 'Owner Certified' car--you only need the cert--I had to more thoroughly prove my car's provenance before he would sell me the pattern (thus making the car 'Registry Certified'). Only afterwards did I get chided by the late, great, Rich Chrysler who told me the same pattern is used on the swage line for the 6-cyl cars.

Bob_Spidell said:
I recall being told by Bill Meade--the owner/curator of the Registry (I say owner because he does make money off the site*)
Click to expand...

Bill is out of pocket several thousand dollars after running his registry for 20+ years. He attempts to recoup a small fraction of his outlay by selling a few things.
Reid Trummel
Editor, HEALEY MARQUE magazine

HealeyRick said:
At least when someone drops a 396 into a 6 cyl Chevelle and puts some SS396 badges on it they usually have the decency to call it a "clone" or a "tribute".
Click to expand...

Hear, hear! I've been using the term "tribute" and "replica" for such cars myself for some years. It seems that only in the Healey world do we enjoy the presence of so many who insist there there's no difference between the originals and the ... not originals. I know of no other model of any car of any marque where such tributes/re-creations/replicas/clones are defended so vigorously as "just the same" - no difference - as the originals.
Reid Trummel
Editor, HEALEY MARQUE magazine

Editor_Reid said:
Bill is out of pocket several thousand dollars after running his registry for 20+ years. He attempts to recoup a small fraction of his outlay by selling a few things.
Click to expand...

OK, my bad. All I meant was that he does charge for some services. 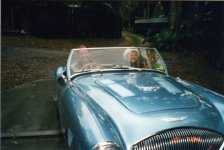 G'day Michael,
In Point 3 you say that the engine number should read "1M----" and that only the 100S had an engine number with a "1B" prefix. Almost all of the 100 BN1s & 2s in Australia have 1B engine numbers, the only exceptions being cars that have Police Issued engine numbers. My car has an added H stamped at the beginning and I have seen several cars stamped this way. By the way, most state authorities in Australia insisted that the engine number be stamped directly onto the block, not on the plate.
The letter M is often (but not always) found at the end of the engine number. It was once thought that this referred to engines made be the BMC subsidiary Morris Engines but doubt has now been cast on this theory.
In Point 4 you say that "Ms are not conversions". My understanding is that the 640 BN2s were completed at Longbridge, then delivered to DHMC in Warwick for conversion to 100M. So they are "conversions" really.
I have a louvred bonnet on my 100, which I fitted in 1972. It has the correct number of louvres but they are the wrong shape and grouped more closely together (please refer to the attached photo). I have seen several other 100s with the same pattern so I assume somebody in Australia was making the modification.
Cheers from Downunder,
Alwyn
Last edited: Nov 24, 2017
Fifty second year in one 100, still going strong!
Similar threads