Offline
I am at the point in my restoration where we are ready to paint. My TR came from the factory British Racing Green and that's what i would like to re-paint it with. The Moss catalog calls out Ditzler 42487. My painter painted a sample and it doesn't look right. Does anyone have access to a color chart showing this color?

Offline
The problem at this point is that all the color chits and sprayed paint has changed over the years. Here is a re-print from Dan "2Long":

Here is a fairly well-done analysis by a fellow in California, but possibly more than you want as it covers the lighter shades as well:

I have spent the last six months gathering a fair amount of information on British Racing Green from a variety of sources and I thought I should summarize it here for the benefit of all. I do have quite a bit more information if anyone feels that they want some of the more obscure mythology.

First, it is well documented that BRG is a range of colors – both for aesthetic reasons and because it visually varies significantly with small changes of formulation. Before the advent of repeatable paint mixing methodologies and more stringent controls on factory colors, the variations often occurred within the same brand and automotive model. In addition, painting techniques and base/pigment choices have evolved or become obsolete. Lead based pigments are no longer an option – therefore formulations exist for many of the variants, but the ingredients do not.

My painter uses PPG paints exclusively and prefers the DCC single stage Acrylic Urethane. Specifically PPG Deltron Concept 2K Urethane so all of these formulations listed here are for one quart quantities of PPG DCC. And I should acknowledge the help of the people in the Color Science Lab at PPG for their responsiveness as I went through this lengthy exercise.

I started off by gathering samples of BRG painted metal items and by accumulating as much of the history as I could gather. I had the computer system read about 15 metal samples (the underside of boot lids seemed the best candidates) and then I selected a few formulations and had these mixed up for testing. Once I had a candidate formulation, I had a sample sprayed onto a 6” x 9” primed metal sheet. These were then color sanded and waxed so that the entire process truly emulated the intended restoration approach. As I started changing the formulations, I learned a few things. Removing some of the black in the formulation, really gave a good insight into what kind of underlying green any particular approach to BRG was based on. When a percentage of the black is removed from the typical GN25 MG green formulation it shifts towards a very earthy muddy look -- trending towards a military type green. Perhaps there is something to the apocryphal story that after WWII the motor vehicle industry in England was well stocked with ingredients for military green paint formulations and that black was added to create a new family of colors that became known as British Racing Green.

In addition to using the computer paint system to read (and attempt to understand) the colorimetry of surviving period painted automobiles, I gathered information about what people have been using for BRG on the typical bulletin boards and forums. While there have been many different approaches used to pick a BRG for individual projects, there do seem to be a couple of trends. Mike Goodman (who recently retired after almost 50 years of MG repairs and restorations) painted many MGTC and MGTD cars in a BRG formulation that was felt to be close to GN25. This PPG code was 44644 (which is called Cypress Green) and it was a Volvo P1800 sports car color with a Volvo color code of 110. Later on, the PPG code for MG GN25 (which was 43342) was switched to the same pigments and sometimes the exact same formulation is used. If one requests the formulations for 43342 and/or for 44644 from PPG you are never quite sure what you will get -- but they can both result in:

Unfortunately, DMC905 is a lead based pigment and is no longer available (at least in California). This above formula is what Mike Goodman used for years. To my eye, it is a very slight bit too yellow green and not quite dark enough.

The other most common BRG formulation is Jaguar HEN or Jaguar color code 701. (Used on 1987-1990 Jaguars) This is PPG color code 46169 and results in a formulation:

This is a very dark BRG with a strong blueish tint. It can require a second look to not think it is black – particularly if it is not in direct sunlight. This is a true Jaguar color and quite popular on XKE’s and on XK120 and XK140 cars. To my eye, on cars like an Austin Healey or an MGA it looks too dark.

In 1991 Mazda built a commemorative edition of the Miata and it was painted British Racing Green. It is Mazda paint code HU. Since it is a more recent automobile, the color formulation is available from many manufacturers. The PPG code is 47037 (called Neo Green) and the DCC formulation is:

This is a gorgeous dark BRG and it looks great on more modern British sports cars. For instance, I believe it is the best choice for a British Racing Green colored Jensen Healey. (Be careful not to end up with the 2001 special edition Mazda Miata British Racing Green. The 2001 version is a modern metallic color and not appropriate for anything.)

One thing to notice is that the more commonly chosen BRG formulations listed above have either four or five pigment tints used in their formulas. It appears that with BRG this is critical. When I used the computer to “match” the period painted samples of BRG that I had collected, I often got a suggested formulation with 12 or more tint ingredients. The color may have come out a match, but the paint was dull and lifeless with no kick. I gave up on the computer system and set about adapting the PPG codes 44644 and 43342 into a modern lead free formulation. In the course of all this testing, we mixed up 19 different formulations. Each was mixed with the hardeners, sprayed, sanded, waxed and evaluated.

A few observations. BRG covers a very subtle range of acceptability. It is easy for the colors to get muddy, lifeless and drift towards military olive drab. It is easy for them to slide into a blue black that is almost not a green at all except under very direct sunlight. All of these colors are attempting to emulate obsolete formulations that are in turn revised as the laws governing paint continue to change. The revised formulas that target the BMC and British Leyland colors tend to go too yellow or they go dull. The revised Jaguar type colors tend to go too blue.
John

If you are going for the original shade, I have a S-T color sample book for the TR-2 with a TR2 BRG paint sample protected by a plastic coating. Happy to loan it.

Offline
Dan, I would love to borrow it. My bodyman has done such a good job with the restoration, I want it painted the right color.
Dick Vinal
10635 Parkway Dr.
Clermont, Fl 34711
D

Offline
Have you looked at the paint on CJD's car?

Offline
Who is CJD ? Where can I see his car?
D

Offline
Scroll through this thread. You will see some photos of his car.

Offline
Thanks David,
Wish there was one of the whole car. Color ndoes look like what we have selected though.

Redoakboo said:
Thanks David,
Wish there was one of the whole car. Color ndoes look like what we have selected though.

Here are a few of the whole car. In bright light it is definitely BRG and looks rather light. Once the sun goes down it can be confused with black. Anyway, I've been happy with it. The real point is that BRG is hard to peg down to a single shade, as it changed over a wide range through the years...and then age on paint tends to lighten dark colors and yellow light colors. I'm afraid that even applies to the color chits to a certain degree. So, look over the options and use a BRG that you think either looks the best or looks the most original...whichever you are going for.

Here is a pic after the sun goes down...you would swear it's black. 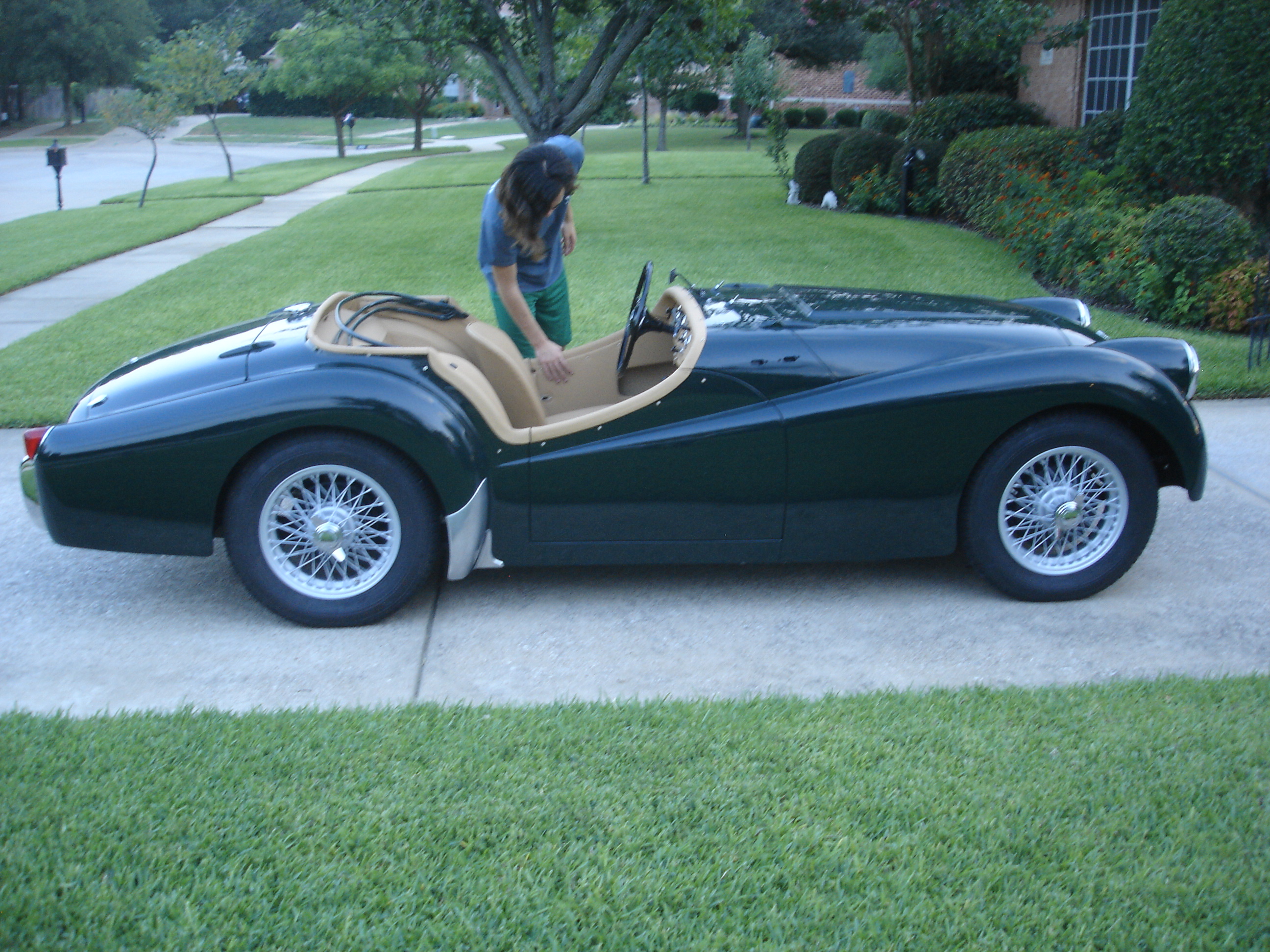 These pics are under an overcast, so the color is more green, but still dark. 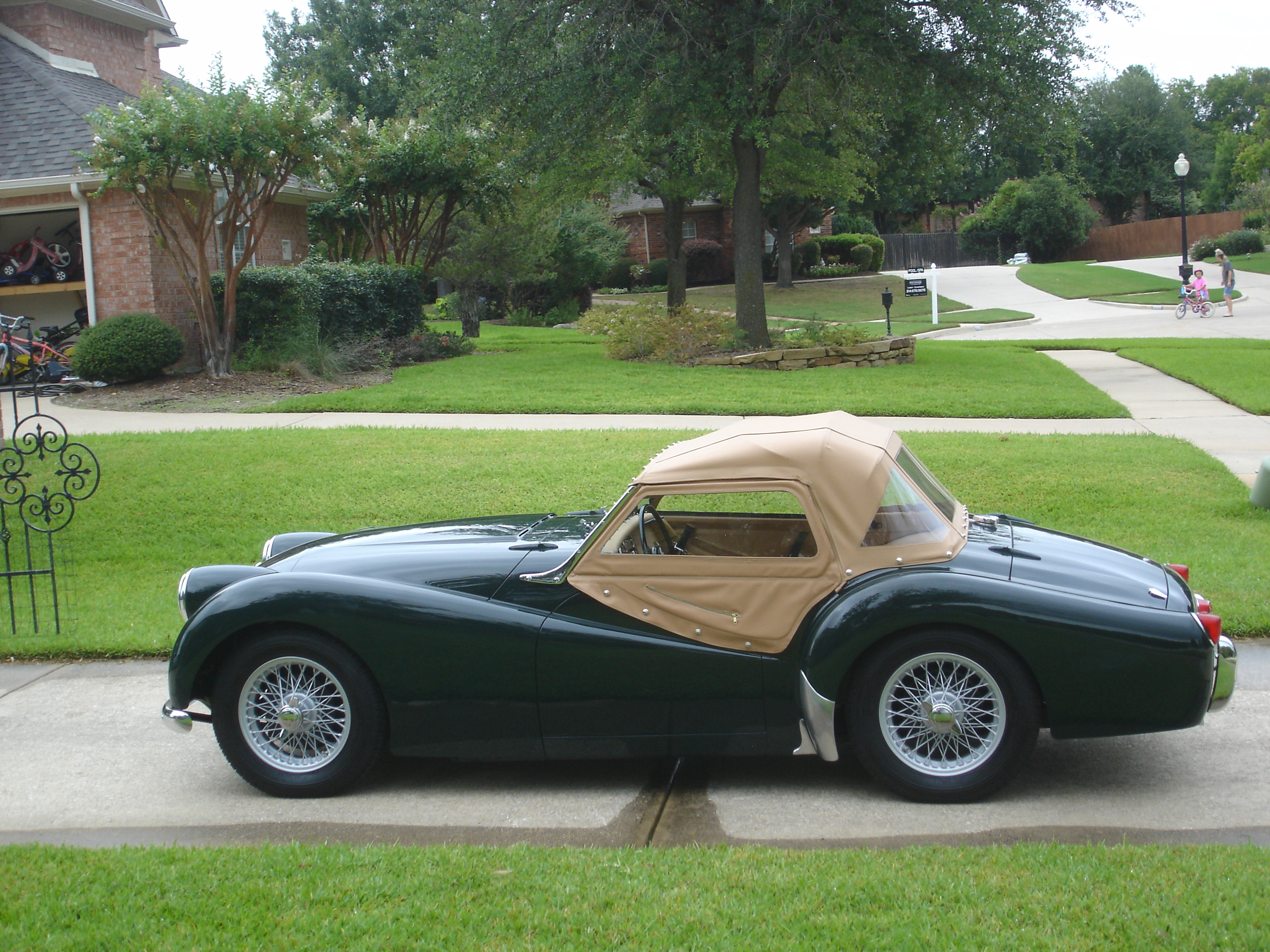 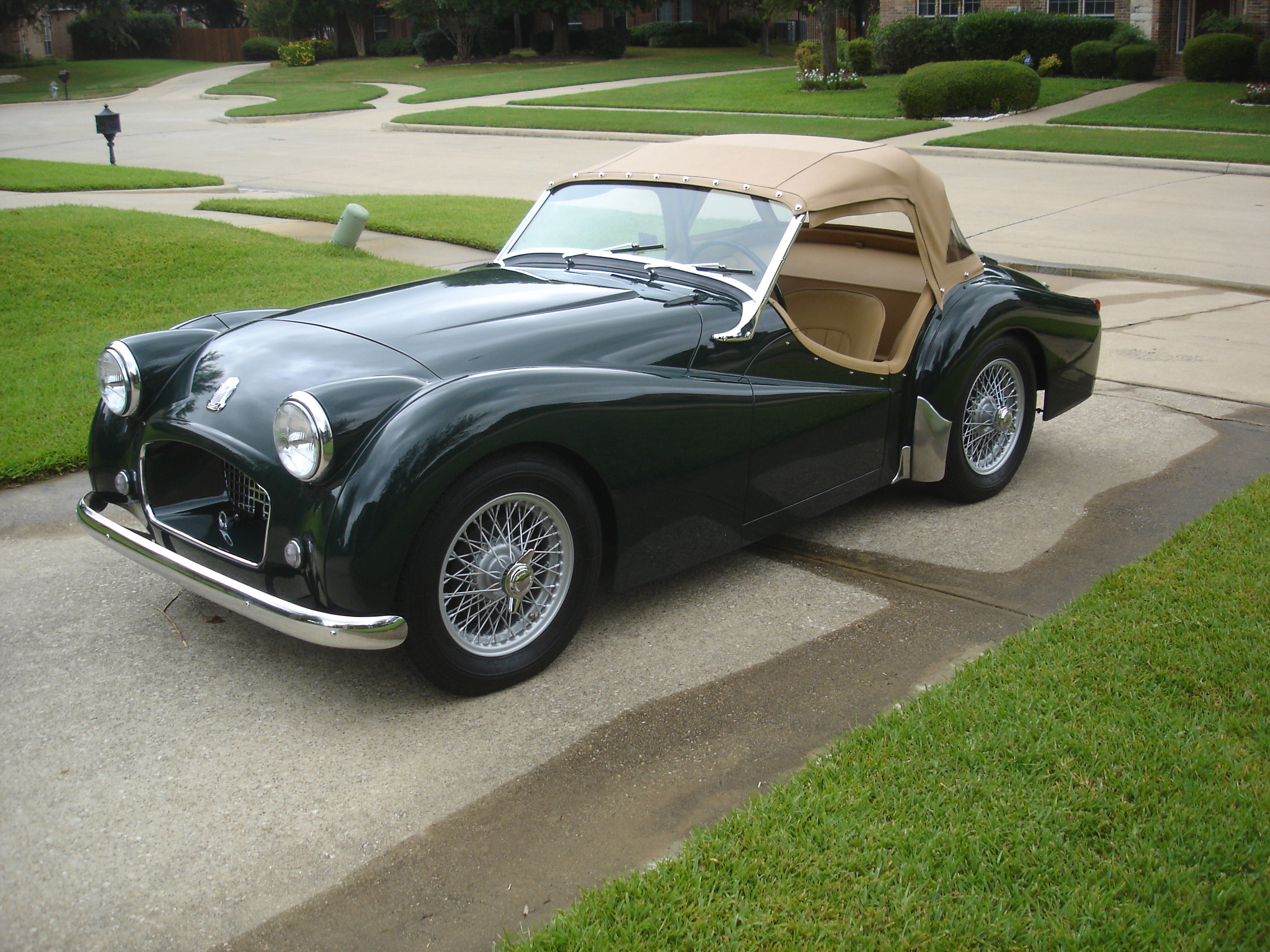 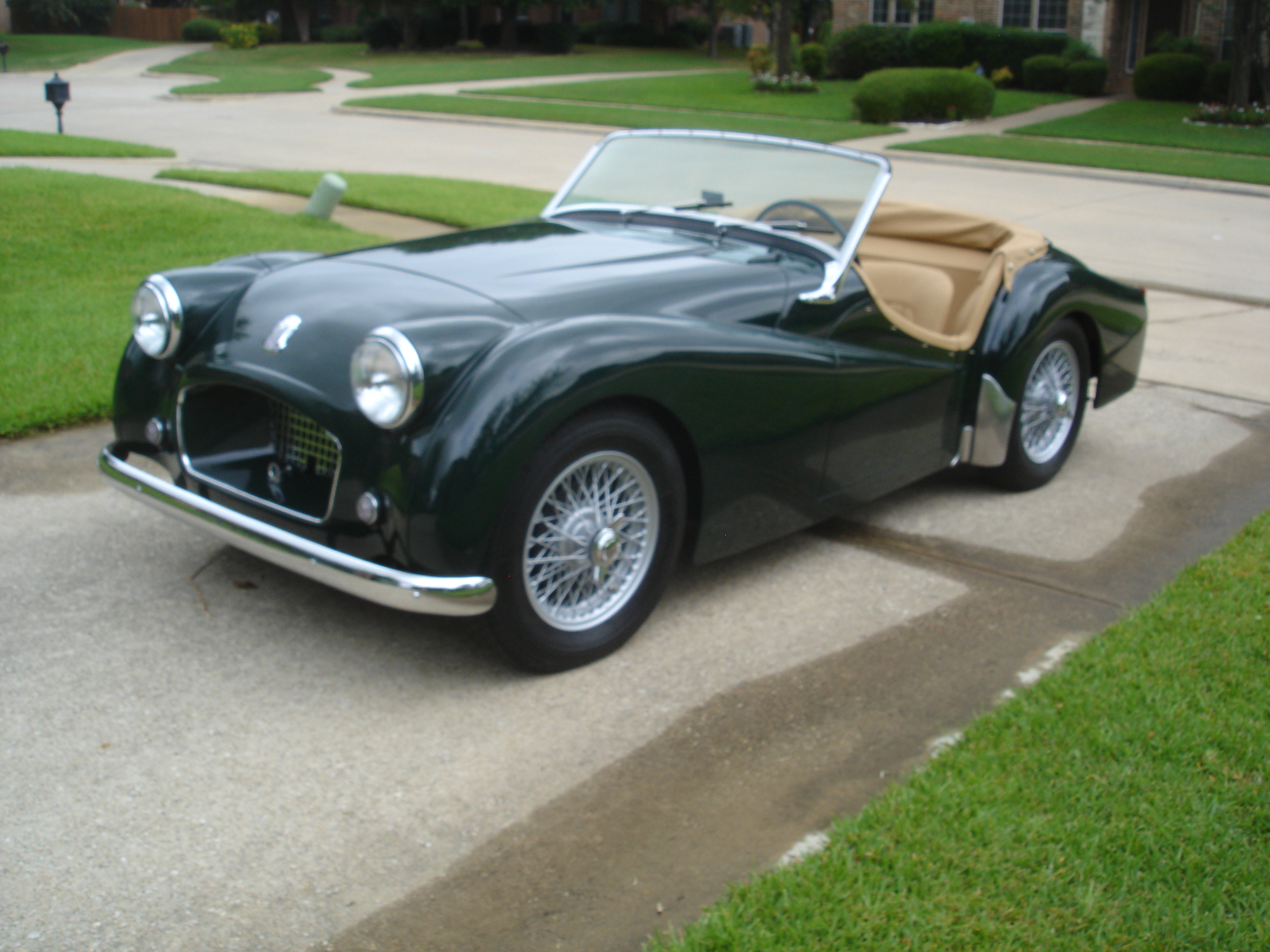 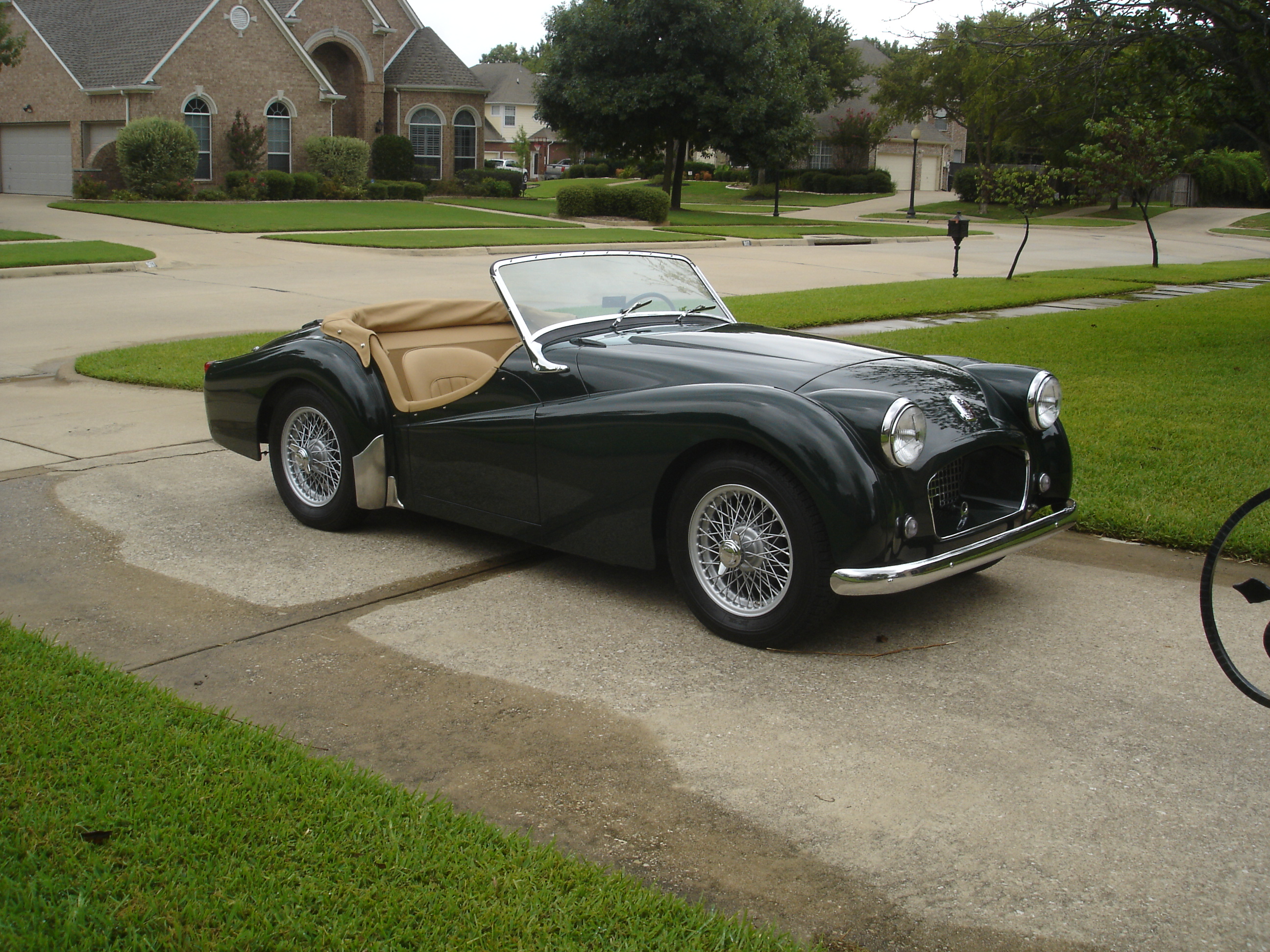 I'll look, but can't seem to find any pics in full sunlight, which makes it more of a true BRG.
John

Beautiful car! Hope mine turns out that nice? You are right, it almost looks black!

Offline
Good job Dick. You have stayed with your project and the body tub is very/most important to getting a quality job. I am envious you found such a quality older car. See if you can get some pictures posted; for me, it beats T.V.
steve
OP
R

Offline
I have never been able to attach a pic on the forum? I have tried but somehow, they never attach?

Offline
Beautiful car John. Would you mind telling us which formula you used? The Mazda colour looks good also but the Jaguar is a bit dark IMHO.

Offline
I used the Jaguar color from the little article above. It is PPG code 46169.
John

WiscTR said:
Beautiful car John. Would you mind telling us which formula you used? The Mazda colour looks good also but the Jaguar is a bit dark IMHO.
Click to expand...

Yes, every time I see John’s car I think it has to be one of the nicest around. That dark BRG is so British!
Dan
S

Offline
Dick, do you get as far as browse your hard drive and select photo?

Offline
Yeah Dick, I think you are using the "attach" button for the website. That limits the photo size and causes a lot of upload issues. Here is the easiest way to link a picture...Randall taught me 10 years ago!

First, go to "Imgur", which is a free online photo service. You will have to open an account, but it's all free. Then you can easily upload any jpg photo to imgur by clicking the "upload a picture" button, and then dragging a picture from anywhere in your computer to the imgur download box. Once you have uploaded a pic, it will show as a thumbnail on the Imgur sight in your "images" section.

Next...we have to link the photo in Imgur to your post. To do that, click on your imgur picture so it blows up full size. On the right of the blown up pic you will have several button choices...you want the "BB Code" selection. Just click the BB Code button and a copy of that BB link code will be saved to your computer...it doesn't say that, but once you click and the "img/………/img" pops up it has been saved.

Next, go back to the post you want to show the pic. Do a "paste", "cntrl V", etc. to paste that BB Code where you wan the pic.

That's it!! On the edit it shows the code, but once you save it and look, it links to the picture automatically. This should get you started...let us know if you get stuck...
John 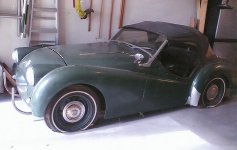 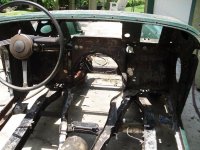 Steve These are the only pic's that would download? If you will send me your email address, I will send you all the rest, that would not down load. Dick redoakboo@yahoo.com
OP
R

Will try that next time.

Offline
Dick - The color catalogue is on its way!