Hope everyone had a great Thanksgiving!

i was hoping to ask for an opinion on wheels, I need a new set for my BJ7. I have been quoted on MWS wheels. Just wanted ask if anyone has them and if they are working out good. Offered to me by a very reputable supplier.

I've always thought/heard that too, but I had a long conversation with Alan Hendrix at Hendrix Wire Wheel and he recommends Dunlop/MWS now. I ordered 5 Vredesteins--they're backordered until the end of the year--from TireRack to be shipped to Alan, where he'll mount them on Dunlop/MWS wheels and ship to me. These are for my BN2; one is a smaller tire to fit in the spare's slot in the boot.

I think Alan would be willing to offer advice.

I think Alan would be willing to offer advice.
Click to expand...

Just endorsing the recommendation to contact Alan for advice about wheels and tires for Healeys. His shop may be the last one in the USA with so much experience with, and care about, wire wheels and the tires to go with Healeys (and other British cars). He's located in Greensboro, North Carolina. WEBSITE
Reid Trummel
Editor, HEALEY MARQUE magazine

Bob_Spidell said:
I've always thought/heard that too, but I had a long conversation with Alan Hendrix at Hendrix Wire Wheel and he recommends Dunlop/MWS now. I ordered 5 Vredesteins--they're backordered until the end of the year--from TireRack to be shipped to Alan, where he'll mount them on Dunlop/MWS wheels and ship to me. These are for my BN2; one is a smaller tire to fit in the spare's slot in the boot.

I think Alan would be willing to offer advice.
Click to expand...

Offline
Have MWS on mine, they are tubeless and take a lot of stick, 5 1/2 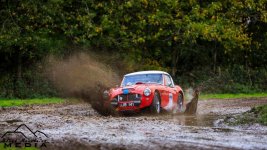 Offline
About a year ago I replaced the 72 spoke Daytons with 60 spoke 15" x 4.5" Dunlop/MWS, Verdesteins, tubeless. No issues so far with loose spokes, truing or air leakage. I do need to top off the air occasionally, as I did with the 72 which had tubes. Regular maintenance. (Avatar is Dayton 72 spoke)
Last edited: Nov 28, 2020
1964 BJ8 phase II

steveg said:
Was Alan's Dunlop/MWS summary something like: "Just as good as Daytons; less expensive"?
Click to expand...

Not exactly, but close.

Offline
Thank you for the great feedback!! Appreciated!!!
Thanks,

Offline
When it came time for wheels and tires I went with 72-spoke MWS from British Wire Wheel who had the best price and availability. Wanted 5 total. They had 3 on the shelf and 2 were shipped direct from UK to Hendrix. The UK sourced ones arrived before the US ones did! Had them drop shipped to Alan at Hendrix Wire Wheel for Verdestein's and full assembly/balancing and UPS'd to Colorado. Very happy with the overall end product.

A plus for 72-spoke when it came time for brakes. As we drive through the Intermountain West and high mountain passes I wanted upgraded brakes. Went Fosseway vented disk which worked very well with the 72-spoke 5.5" wire wheels.

Offline
G'day Bill,
Over 10 years ago (and to the dismay of some on this forum) I purchased four MWS 60 spoke chrome plated wire wheels from our local importer Aussie Classic Wire Wheels. Since fitting the wheels to my 100 I have done several interstate trips to destinations as far away as Adelaide (2,000 km from my home in southern Queensland) and have never regretted my decision. When I first fitted the wheels my wife asked me what I had done to the car, the ride was so smooth! Never had any problems with the plating, no loose or broken spokes (which are stainless steel) and they still look as good as new when I prepare the car for a display.
I have no personal experience with the Dayton product but I know plenty of fellow Healey owners who have chosen them, so I am aware of their reputation but as far as I am concerned the MWS product is comparable.
Cheers,
Alwyn
Fifty second year in one 100, still going strong!

Do you have disk brakes in front, or were the wheels offset--initially or with some fiddling--to fit drum brakes?

Offline
Bob Spidell asked: Do you have disk brakes in front, or were the wheels offset--initially or with some fiddling--to fit drum brakes? Bob

G'day Bob,
My BN1 has standard 1.75" wide drum brakes all round. The wheels as supplied slid straight on, with no clearance issues. I have heard that the 2.25" brakes on a BN2 can cause problems.
Cheers,
Alwyn
Fifty second year in one 100, still going strong!

Offline
Thanks, Alwyn. I have a BN2 with the wider brake drums; guess I'm stuck with 48-spokers. Car won't be driven hard unless, of course, I get a chance

Offline
G'day again Bob,
I wouldn't be too upset about being limited to 48 spoke wheels. They will be brand new so will not be affected by years of use as original wheels were. Don't forget that when our cars were new they usually were employed as everyday transport, unlike our precious possessions of today. It's like a lot of modern upgrades, like the chassis for instance. Kilmartins here in Australia offer strengthened chassis rails and I often wonder why people think they need them. The roads of the today are vastly superior (at least, here in Queensland) to the roads of the fifties and as well, it is rare for any classic car to be driven as hard as they were when a couple of years old. Yet the 48 spoke wheels and 'weak' chassis withstood that treatment.
Cheers,
Alwyn
Fifty second year in one 100, still going strong!

I made the same argument to the late Martin Jansen, maker of the 'Jule' frame, in a not entirely cordial 'discussion' years ago. He was correct, in principle at least, that our old frames could use upgrading/replacement. I noticed when I had my BN2's frame on a rotisserie that you could hear loose rust when we rotated it, and I noticed when it was up on a Quickjack that the gaps on the rear pillars of the doors widened. But, given my Healeys' see only limited use I'm not terribly worried about it.

I'll get painted 48-spokers, as I think they look best on a white/black car; my BJ8 is red/black and chrome/stainless Daytons look good on it.

Offline
G'day Bob,
I was not advocating that original parts like chassis should not be replaced when the need arises, I just meant that when new parts are fitted, be they wheels or whatever, I could not understand the need to strengthen that part. A new Kilmartin (or Jule) frame will restore the car to the strength that it had in 1954 or 1967 so the "improvements" offered by both suppliers seem superfluous to me. It is likely that the restored car will not be subjected to the harsh use of being a sole means of transport during the week plus the kind of weekend activities that enthusiasts got up to at that time, like rallies over poor roads, and other types of sporting competition. I will add that I chose 60 spoke wheels because I prefer the look of the crossed spokes, but I admit the extra strength was a bonus.
When I had my car on a rotisserie during restoration I feared that I would hear flakes of rust rattling around, but thankfully it was not that bad. And I had the body assembled and painted before I attempted to install the engine/gearbox. There was no change in the door gaps after those items were fitted.
Cheers,
Alwyn
Fifty second year in one 100, still going strong!
Similar threads