Offline
Starting to search for engine gasket kits and other rebuild components. Came across this brand of gaskets in the Moss catalog "Payen". They also show aftermarket gaskets at almost half the price. What's the difference or it it the old saying you get what you pay for?

Offline
I believe Payen has quit making our gaskets. So unless Moss found a stash of them in some warehouse, I doubt they actually have them available.

I guess whether they are worth the difference kind of depends on what your time is worth. If you don't mind tearing down the engine yet again because the gasket didn't seal, then by all means save a few dollars.

But I'll take.Payen if I can get them. I hate bad parts much more than paying extra for good parts.
Randall
56 TR3 TS13571L once and future daily driver
71 Stag LE1473L waiting engine rebuild
71-72-73 Stag LE2013LBW waiting OD gearbox rebuild

Offline
I like to repair things once. That's why I asked.

Offline
BPNW lists this head gasket with reference to Payen, https://www.bpnorthwest.com/triumph...ets-seals/head-gasket-german-tr3-to-tr4a.html which says in part:

"This is an Head Gasket ONLY for a Triumph TR3, TR4 and TR4A. Made in Germany off of the refurbished PAYEN tooling. When the original Payen tooling wore out, Federal Mogul chose not to put money into rebuilding the tooling. A German company paid for the tooling dies and had them refurbished to new specifications. With head gasket is the closest you can get to the original Payen head gaskets that had a slightly larger combustion chamber size to accommodate bores up to 87mm. Cross Reference AE330, AE330P."

I've got my head off and just received one of these today. I'll take a close look in the morning and be back.
Richard
65 tr4a
OP

Offline
Thanks for that interesting info. Sounds like not many are interested in making our parts. The Roadster Factory shows a set for a TR6 that includes the crank seals for about the same money. Wondering how they can do that when all the other companies don't include them.

Offline
They have dropped the "Payen" reference from gasket they list for 86mm but available at 34.19 which I think is a slight reduction from the previous catalog. They have also a gasket for the 83mm engines, previously unavailable. Then there is 87-89mm gasket at $99.99. Moss changed all the numbers, too, the new numbers superseding all the old ones. In earlier catalogs, there was only one part number for 86 through 89 mm engines. I've used that gasket on a couple of 87mm engines without incident. I do know that there were some questions about using it on 89s but I wasn't aware of any particular problems with the 87s.
Then throw BPNW, RF, and the rest into the ring. I certainly do not know what to recommend, glad I still have 2 of the old Payens.
Tom

Offline
Here are a few photos: 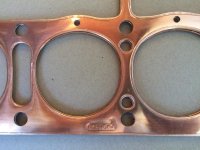 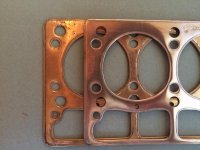 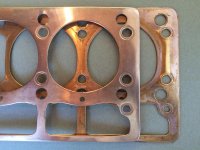 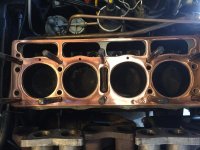 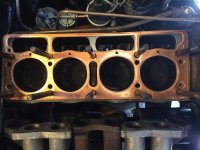 The used gasket is $26 Moss. The new gasket is BPNW $58 which has imprinted BASTUCK, MDGTR4 and TOP on the sides with folds. The BPNW gasket also has more uniform and slightly larger holes for the compression chamber. Still not perfect but better. I hope the overlap is the reason the Moss gasket leaked and not my inconsistent liner tolerances.
Richard
65 tr4a

Offline
Another important consideration is to make sure that there is NO protrusion at all of the gasket into the combustion chamber.

TomMull said:
I think there is a considerable tolerance for liner protrusion inconsistency but they do need to be in the specified range.
Tom
Click to expand...

Thats the rub for me. The front two liners are just at the minimum .003" but the rear two are over at .009". I really don't want to take this thing apart.
Richard
65 tr4a
Similar threads