Offline
Spotted in the restoration section of the Barber Vintage Motorsports Museum - it was in for some routine maintenance.
This one is powered by a Buick nailhead engine. 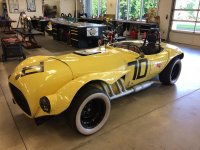 Offline
Old Yeller is a heck of a neat car.
Cheers,

Offline
Saw Old Yeller II known as " Ol' Yaller II " at the Ninth running of the Monterey Historics in August 1982.
A group of us from New Zealand came to the USA to go to the Austin Healey meeting in Colorado in July and four of us tured the West Coast in a VW Kombi.

Ol' Yaller has visited NZ a few times in recent years with Ernie Ngamatsu to attend Historic Meetings.
Not a British Car of course, but a great one " non-the-less ".

A photo from Monterey [ Laguna Seca ]in 1982. The Buick Nailhead Engine. 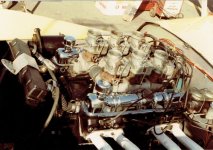 Something more British but with a Buick connection a Rover P6B with the Buick based 215 ci 3,528cc motor - this is a European Spec 1970 model that my Uncle had new in Switzerland, and shipped to New Zealand in the mid 1970's
I took it for a spin one day .." Don't try this at Home " as they say !! 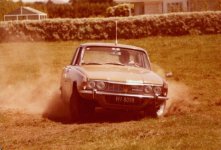 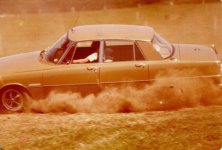