Offline
Lilly is a tri-carb...

changed out the pertronix for points today and put on the new thermostat cover.

again moderate success. first the car did not want to do any more than idle. when i tried to give a little gas, it wanted to die. found that my points setting must have slipped when i tighten the screws so i reset the gap. it went back like it did on the first run. car ran up to 2200 rpm and would not slow down. this time i know the vac advance line was plugged at the carb. So no vac leak there.

i have the idle screws backed out and even detached the linkage to make sure nothing was holding the throttle open. i made some more adjustments to the timing and tried to cut back on the mixture a little. finally got it so it would slow down but then it would slow down and quit. no consistent idle. So i did not really get to check my timing the way i would have liked.

i was getting some backfire thru the carbs at times. at first when trying to start and then later when giving it gas.

there were a number of times today i felt the car was just not getting gas correctly. with the engine cold tomorrow i am going thru all the carb settings first. going back and checking the static timing again and mark the diz this time for reference.

when the car does run, it runs well. no bad noises no popping. i just get some backfire while giving it gas at times and sometimes it does not seem like it is getting gas properly. towards the end it was dieseling when i tried to turn it off.

so start at the beginning and see what happens. i don't think it is really far off. just need to get it leveled out. i'll mess with it tomorrow afternoon and then drain the fuel tank before we leave for the south.

the part where it wants to run right up to 2200 rpm throws me. just think that has to be an air leak some where. not sure what else could cause an engine to idle up so fast.

...
the part where it wants to run right up to 2200 rpm throws me. just think that has to be an air leak some where. not sure what else could cause an engine to idle up so fast.
Click to expand...

The throttle plates may not be closing enough. Might be something in the way.
John, BN4

Offline
Is there oil in the dashpots? Backfiring when cracking the throttle typically indicates a lean condition.

It's going to run like crap until you can get the carbs sync'd and tuned properly (float/fuel levels in the bowls are an essential first step).
C

Offline
When you set the point did you use a dwell meter?

Online
Take the air filters off and make sure the throttle plates are fully closing , you will need a mirror to do it .
"If it aint broke ....dont fix it "
" Thats not an oil leak ..........its a special automatic British rustproofing system "
Best Healey in show ABCD Ottawa 2013
Best Healey in Show Boot n Bonnet Kingston 2013
OP

Offline
i did not use a dwell meter at this point. just gapped to .015. yes there was oil in the dashpots.

today i pulled out the "rebuilt" carbs. don't know who rebuilt them or when. they came with the car. first i pulled the floats from the chamber.

here is a picture of what one looked like. 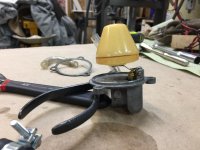 now i thought that the float in this position should sit about 1/8 off the top ridge. but i have also read that some people were pressing down on the spring loaded needle valve to set the height. is this done differently for different needles? ceartinly this one is about 5/16 or more off the top in a resting position.

if you look in the chambers this is the amount of fuel that the height adjustment allows. about 1/3 of the chamber has gas in it. 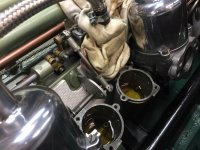 That looks low to me. but wanted to check with people here who know.

also it looks like someone broke the middle float cover and glued the float pin to the lid. it works ok but not sure i could ever change the needle or adjust if necc. So now i need to find a middle carb float cover. Doesn't look like Moss has them which may be why someone just tried to glue this one. 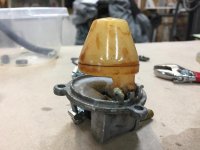 i did find some other issues.

front carb:
the throttle arm was hitting the base so it would not allow the throttle to go to WOT. bent it just a fraction and it now misses the base. also when i tighten all three screws on the cover the needle sticks. if i back off the back screw even just a small fraction, it drops fine. going to work on centering that again.
middle carb:
well you saw the float above and the glue job. not sure how long that float and needle valve has been in there. it needs to be changed if i can find a cover. the throttle shaft on this carb seemed a little tight to me. it works fine but the other throttle spindles turn easier.
back carb:
there is end play in the spindle and the throttle turns quite easily. if i try to wiggle the shaft up and down though, i get very little if any. hoping i am not getting a leak there. is there a way i can tell before i mount?

headed south for a few weeks so i will be checking any information i can find and put this work off until i get back.

oh, one more question:
Do any of you run a fuel filter anywhere? i bought one and was going to mount it in the hose right before the carbs. the tri-carb has about an 8" hose to the first carb. just wondered the thoughts on this for Healey's. where do you put one and any certain type or brand?

Online
Why not just send them to apple hydraulics and have them rebuilt correctly and flow balanced etc . Thats what i did with both my BJ8 sets . Bolt them on start it up set the idle done . Tweak the mixture afture some driving .
Yes I have billet filter right at the fuel inlet pipe on the carbs , available from all the major suppliers .
"If it aint broke ....dont fix it "
" Thats not an oil leak ..........its a special automatic British rustproofing system "
Best Healey in show ABCD Ottawa 2013
Best Healey in Show Boot n Bonnet Kingston 2013
D

Offline
Sorry to see "rebuilt" carbs look so buggered.
Are those the correct floats?
My tricarb has brass floats.
OP