Offline
as some of you may remember before i left to go south i was having some issues getting Lilly to run properly and a gas tank that had a leak. before i left, i pulled out the gas tank. then i pulled the carbs back off. i also had a float chamber cap that was glued up and the floats were adjusted pretty low.

While i was away, i found a new float chamber cap for the #2 carb. i also ordered new float valves (Grose), new pins and new floats along with new gaskets between the carbs and the spacers.

what i found when i removed the carbs:
well first i felt from the way the car tried to run that i had a vacuum leak somewhere. And i am pretty sure that was the case. two of my heat spacers had a clear cellophane on them. you could not really see it until the one had gotten hot enough to wrinkle a little. i am thinking that is where i was getting air. the third spacer was fine. guessing they used the plastic sheeting in the process and it did not get removed.

second thing was i did have one needle sticking. if i backed off the back screw on the cap about an 1/8 of a turn, the needle would drop fine but not if it was tight. so i recentered the needle on that carb.

Next the throttle arm on the first carb would catch the base on the way by and hold the butterfly open on the return.

Last my linkage seemed to have a little bit of a bind in it. hard to pin point where but i felt it did not move as easily as it should.

All in i think this caused the backfiring and missfiring and uncontrolled idle. as i put the carbs back on this time i made sure to leave all linkage loose. even the links to the main shaft. i could then slide them back and forth to make sure the shafts rotated freely. i reset the linkage and this time bent the arm on the first carb so it did not hit the base. put new gaskets between the carbs and the heat spacers. all that went pretty well with some fiddling around.

i installed the new Grose valves in the lids. here i was not as happy. the valves seem to be a little thicker that my other needle valves. so i had to make sure i did not use any spacers or gaskets under them. or else they would not let the pin thru. i also could not use the new floats. i could not get the bend like i wanted to give the right height on the float. so after trying for quite a while, i went back to the plastic ones on the old caps. the new cap i bought came with a float so it worked fine.

i am also having a problem with one of the Grose valves. it holds for a while and then for some reason it will stick and start running gas. it is the back carb so i have to pull the lids from both the 2 and 3 carb to get it off. (short fuel hose holds them together) i took it off once and blew air thru it. it worked fine for a while and then it started leaking again. So i am going to give it one more shot. maybe try some cleaner or WD40 in it. it must just have some piece of dirt in it? Not sure exactly how these work but tomorrow we will get personal.

As for the car... well when the valve did not leak, it ran quite nicely. very smooth, no backfiring, no missing. just smooth. i actually have not set the timing yet. i pulled out my light and it did not work. geeez, it is only about 40 years old.... you know i don't think i have used it in at least 20 years. The TR6 i set the timing with a vacuum gauge as well i did it on the Vette. So tomorrow i am going to buy a new light. then set the timing. as smooth as it runs i can't be too far off though.

All in i am quite happy with how it seems to be running. oil pressure seemed to stay right around 60psi but i really did not look the last couple of times i was adjusting the carbs.
have not tried it under load yet but just sitting it runs very nice. i also had no issue today with any overheating. it runs up to about 180 and stays there. at least during this test day. tomorrow it is back to the float valve and then setting the timing. my hose/gauge worked well on balancing the carbs. i did try the lift to check for mixture and the result shows i am running a little lean. hope to work on that tomorrow as well.

Just for the heck of it, i want to try and see what the vacuum gauge will read on the vac advance line. since it is not on a central intake, not sure what reading i would get.

anyone else have issues with a Grose valve? suggestions on cleaning it out?
My hose and flow meter. taped the meter to the hose to seal it up. 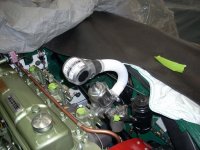 Offline
re: "anyone else have issues with a Grose valve? suggestions on cleaning it out?"

I installed Grose Jets in my BJ8 many, many (30+?) years ago. They have performed flawlessly ever since. I bought a pair for our BN2 a few years ago when we were having fuel delivery issues (erratic pump behavior, flooding, sticking, etc.). The float valves weren't the problem, which we eventually solved, but I noticed one of the Grose Jets would stick in the closed position (they have a small ball bearing sitting on a larger ball bearing, the small ball would stick in the valve inlet opening). I believe the company was bought out years ago and, apparently, quality went in the crapper.
OP

Offline
Thanks. i plan to try and clean with acetone today and see what happens. you would think gas would eat off any sealant.

Offline
I have had Grose jets in my car for perhaps 15 years without a problem but others report leaks, etc. Could be bad batches or inconsistent quality....
[SIGPIC][/SIGPIC]
Best--Michael Oritt
1954 Austin-Healey 100 Le Mans
1959 Elva MK IV Sports Racer
1961 Ginetta G4

Offline
re: "i installed the new Grose valves in the lids. here i was not as happy. the valves seem to be a little thicker that my other needle valves. so i had to make sure i did not use any spacers or gaskets under them"

I think without gaskets you might get some leaking past the threads. Just a SWAG, though.
G

Offline
For the vacuum gauge, consider hose connection at inlet manifold vent (tube) located on the right and left bottom side of the manifold. These vent tubes are designed to drip any surplus fuel from the manifold - yeah there's usually a small bit of raw gas puddled on the drip pan after a good drive. Make sure these tubes are not clogged up either, since the excess gas will have to flow somewhere and that's usually washing down through the cylinders. "Normal" vacuum readings taken from any one of the vent tubes will show that the line(s) are clear. Distributor vacuum advance location will not provide accurate readings. GONZO
OP

Offline
Keep in mind my car is a tri-carb. 3 intakes.

i cleaned my valve in acetone and sprayed it with carb cleaner as well. since then it had not leaked... at least for today. i will keep an eye on it but hope i have gotten it cleaned out.

i tried to put a gasket back in behind the valve because i wondered about gas leaking around it. but you can not do it and get the pin in. on mine it just will not pass. So i took the gasket back out.

i also bought a timing light today and, surprise it was set perfectly on 15* BTDC. so that was fine. i rechecked the carbs for balance and got them set. i also checked the mixture. ended up lowering the nuts about 2 more flats. at this point i could get just the slightest increase in engine speed with a little lift of the piston. i pulled out the plugs and they were carboned up a bit. i guess not surprising since i was adkusting everything. lots of idling. put in some new plugs that came with the car. i will check them after i run the car some. see what they tell me.

Took the car up the driveway and back a few times. it pulled really well. no misses or the least bit of sputtering. guessing everything is pretty close to where it needs to be. brought it back in the shop and put the breathers on.... boy that sounds so simple but it is anything but. no wonder these guys did not last. they can make something so simple so difficult. finslly got them on and surely do not want to take them back off. what a PIA!

lifted the car up and ran it in third gear to try the overdrive. it went in ok and i checked the amps being used while it was running. looked good.

the only thing i am having issue with is getting the car to reach WOT with the pedal. i had adjusted the rod to the pedal out so the pedal would have more travel to the floor hoping it would allow me to hit WOT. but that did not work. And i think the lack of spring tension would not pull the throttle completely closed. so i shortened it back so the pedal rests the 2-1/2" off the floor. my next job is to try and get it so the pedal will reach WOT. i think there may be a bolt loose on one of the arms causing it to slip. hopefully that is all it is.... and i can get to it. surely tight in there.

after i get done with all this fiddling, i will have to check the OD kick down switch again.
Similar threads