wow that engine is a beast... well it looks that way when you try to fit it in the little opening...

dropped the engine in today. it is tight and half way thru it i wondered if it really did fit. getting ahead of myself. i got the engine all set up on the engine crane i borrowed. i ended up connecting it in 3 places. the front valve cover bolt, and on the rear plate. i almost used the top two bolts on the rear plate but after looking at Keith's pictures (see engine hoist thread) i saw he used the next two. then looking at it a few times i realized it is probably too hard to get to these bolts after the engine is in. plus i worried the chains get in to the firewall. so i went with the same holes he did. i bought three connectors at Tractor supply to hook the chains to. the front one i had to grind back so it would not press against the bolt. 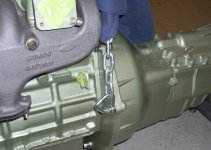 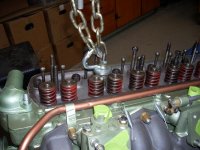 so i was pretty much set up. 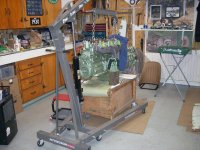 and then i took some measurements.

my car lift is actually like two ramps and the bottoms are bolted to the floor. the legs on the crane were going to run in to these bases and it looked like they might do it about 6" before my motor mounts would be over their base. the last thing i wanted to do was get the engine almost in and then have to pull it back out. i played with a few ideas but then decided the crane was not going to work. i have a an electric hoist mounted to my ceiling. after a few more measurments, i opted for the ceiling hoist.

the ceiling hoist worked well though. i piled blankets and towels all around.... maybe too many. you need every bit of room you can get. the worst thing was the engine leveler. it was one from harbor freight that came with the crane i am sure. (borrowed this to) anyway it was a bear to crank. i finally removed the handle and put a pipe on the end of the arm to turn it. boy this is a scary time i will tell you. first time and by myself. last thing i wanted was to drop this thing and dent something. it seemed like it took forever but i finally got the engine to an angle i could get it in the tunnel area. then i kept bumping it down while pushing the car forward. my next fear was getting the motor mount over the brake reservoir but once i got the gear shift part of the tran in the tunnel it went pretty smoothly. i had put a little dolly under the car to catch the end of the tran as it came down and keep it moving. this also helped to level the whole unit. then i started cranking it back to level. as i did it seemed i could lower the engine. when it got back far enough i put a rope around the very back and lifted it up over the frame. the next issue was making sure i missed the brake line from the back of the car where it attaches to the union. finally i got the engine far enough back i could use a pry bar between the damper and the cross brace. pushed it back and let it down at the same time. it dropped right on the mounts.

well i thought i had it made. but not so fast. got to get those holes lined up pretty straight on the mounts to get the bolts in straight. the passenger side was good so i ran all four in. the driver side not one lined up good enough. i pushed and pulled and finally got one to start but the others looked way off. at first i thought i must have a bent mount. that would be a real pain. ended up i went to the back of the tran and moved it left and right. a little bit of movement one way or the other allowed me to lined up the other holes one by one. once i got them in, i went to the back and bolted in the tran mounts. So if i was to give a tip, it would be to not bolt the rear until you have the front two with all four bolts started.

after this i could remove the chains. whewww, what a relief to know it was in and i did not scratch or damage anything. i then went opened up a folding chair, sat down and drank a beer.
OP 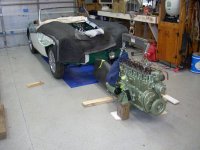 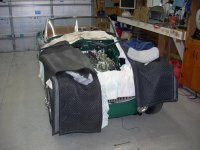 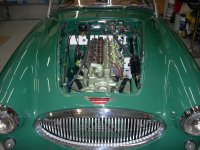 as i sat there drinking my beer and looking at the car, it hit me. you know this is the first time i have seen this car with an engine in it. it sure makes it look different. the stance changes with the weight and it really changes the look for the better. Or maybe that was just my relief of know it was finally in. haha 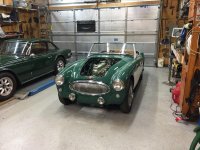 Drone Dog - I have been enjoying following your project. I just love these kind of milestones, all that work (and nerves) and some really fine progress to show for it....looking good, and driving time is almost here. Congrats on a great day!
If you're like me, that may have been the best beer you've had in a long time.
Dave

Yessiree, that is one heavy combination. Easy does it. Grease the H.F. leveler well (I am sure you did). They work but are bulky and must be placed properly. Glad you got the job done. This may not be your only trip down this road! Not so bad with trans attached, I prefer to load both at the same time as well. Yeah, leaving the O.D. end free to slide sideways etc when bolting the front mounts is key (Not to mention having that durn crossrod shaft in place!). Congrats, elrey
Last edited: Jan 31, 2018
A wise man knows he knows not. Lao Tsu
G

You did the job of two men! The force is strong with this one. Keep up the good work and let's hear that engine fire up soon! Gonzo
B

I have been following your posts.
Great job.
I like the color of the car.
looks to be Spruce green on my computer screen.
May i ask what paint you used?

Congratulations!! Yep, it's like trying to get a bear into a Cinderella glass slipper.
John, BN4
W

WOW I have been a rank amateur for 45 years doing this stuff, tightening '66 Alfa head nuts after gasket replacement at 32,000mi. my introduction to "oh they all do that," used hand held fish scale and pipe on ratchet handle with 2' long rod to get torque right. TC rings with engine in and aluminum sheet rolled up with hose clamps to adjust for i.d. to o.d. of rings, etc. etc. most recent Etype replacement start motor by swapping normal headed bolts to Alan key and latching on with needle nose vice grips etc. etc. '67 330GT it is built so taking cam cover off tears O ring and whole front timing plate off to replace although this was prior internet, went to ACE got O ring, razor blade, and super glue, once forums appear turns out that is a tried and true one. Keeping as many bolts loose as possible before final tightening wise, building Caterham manual suggested doing so for many reasons. When I read posts from well-equipped shop people I wonder if I am only one to play it by ear. Congratulations to you and the force is with you already--my forum name of "why" is the great unanswered question. Jay '65 3000

I ran into s similar problem with the cherry picker I borrowed when I put my engine and tranny in. My solution was to leave the car on the ground and remove the castors from the hoist. I used it as a fixed unit and rolled the car fore and aft as needed. I was also by myself and it was the scariest thing I've done in the barn. I still have images of what the damage would have been if the ram failed or if I went through all that work to find I had to pull it out due to the angle of the dangle. Plus, although the picker was a 2 ton unit, I had to have the boom all the way extended and I seriously questioned if it would remain steady with that load. Oh well, you cant get experience without having experiences. Good job.
Jon Robbins
1956 BN-2 (do it all yourself, you'll be glad you did)
OP

blue62, i have no idea what the color of this car is. the PO had it painted before he decided to quit the project. (new girlfriends will cause that...) i had some paint left over in a jar that i used and while i did, i painted one piece of steel. took that down to a local paint shope for them to match. i only need some touch up at this point so they just made me one rattle can. very nice match though.

the owner called it british racing green but it is not like and BRG i have ever seen. certainly not close to my TR6. but it is a nice color and the paint job is decent so i will leave it.

thanks for all the help and nice comments. feels pretty good... right now anyway... hahaha


Drone Dog said:
blue62, i have no idea what the color of this car is. the PO had it painted before he decided to quit the project. (new girlfriends will cause that...) i had some paint left over in a jar that i used and while i did, i painted one piece of steel. took that down to a local paint shope for them to match. i only need some touch up at this point so they just made me one rattle can. very nice match though.

the owner called it british racing green but it is not like and BRG i have ever seen. certainly not close to my TR6. but it is a nice color and the paint job is decent so i will leave it.

thanks for all the help and nice comments. feels pretty good... right now anyway... hahaha
Click to expand...

Color looks to be Pacific Green, a rare Healey color.

PS - there is/was a site which had all the Healey paint & interior combinations interactively, but I couldn't find it. Looked on healey6.com
Steve Gerow
Altadena, CA, USA
1959 AH BN6 2-seat roadster / 1974 TR6 Emerald Green
Check out my galleries:
http://www.pbase.com/stevegerow

Nice job TL. I can't believe you did it by yourself. I had 4 helpers, and it was still a bear. Like you said; at one point I started to wonder if the thing was actually going to fit!

Drone Dog
I just went back and looked at all your pictures.
It just struck me that your car is Green over white.
I originally thought it was solid Pacific green.
the green over white looks great and your doing a great job on it.
looking forward to more posts from you.
Keep up the good work.

PS - there is/was a site which had all the Healey paint & interior combinations interactively, but I couldn't find it. Looked on healey6.com
Click to expand...